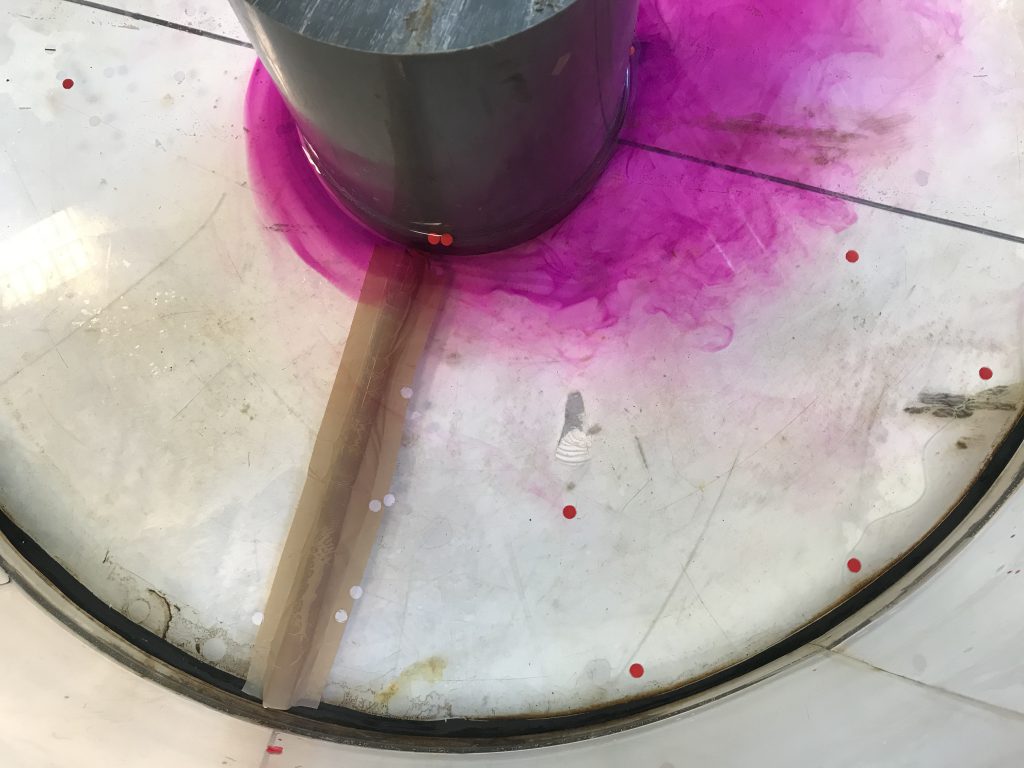 Next attempt at the topographic Rossby wave! This time with following the geosci.uchicago.edu instructions more closely…

…and then the tank had hickups, so we did get waves, but a lot more diffusive than we had hoped, because the tank slowed down a lot more and in a more bumpy fashion than I had planned…

Usually when we talk about waves on this blog, we talk about surface- or sometimes internal waves, but my waves almost always oscillate vertically. Today, we’ll mix things up a little: Rossby waves are waves in the horizontal plane. They exist for example as oscillations on the atmosphere’s jet stream. In order to understand what causes them, we need the concept of vorticity, which I will go over first before giving examples for Rossby waves.

Vorticity is a measure of how much a fluid is rotating. Generally speaking, once a fluid is in rotation, it wants to keep rotating (as we saw for example with the bottom Ekman layers in a rotating tank, where the water inside kept on rotating after the tank was stopped, until it was slowed down by friction). There are several components that are at play here — the rotation that we see when looking at eddies, the rotation of the Earth, and others — which I will go over in the following.

The easiest way to imagine what “vorticity” is (and the only one that I’ve talked about on this blog, see here), is to think of a little float in a flow. In a vorticity-free flow, that little float will always keep its orientation (see below). However if there is shear in the flow, i.e. the flow field carries vorticity, it will start to turn.

Relative vorticity is what we see for example when looking al leaves swirling in rivers.

The rotation of the Earth is clearly important enough for us to want to spin our tanks to simulate its effects on ocean currents.

The sum of relative and planetary vorticity is called absolute vorticity: This is how much any fluid column is rotating in total, including all possible components of rotation (which are only the two mentioned above, but still…).

One more factor that can influence the rotation of a fluid parcel is the water depth. When water depth increases, columns of water get expanded vertically (since, for continuity reasons, they still have to go all the way from surface to bottom, even if the distance is now larger) or, if water depth decreases, squished. Similarly to figure skaters that stretch or crouch to increase or decrease their rotation, the expansion of a column of water leads to a change in its rotation.

Potential vorticity is defined as absolute vorticity over water depth.

Potential vorticity is conserved, so if water depth, planetary vorticity changes or relative vorticity changes, something else has to change to compensate. And if water changes how much it is rotating, this leads to meanders in currents, i.e. waves.

At position 1, a fluid parcel gets for any random reason pushed northward. As it moves north, its planetary vorticity increases and its relative vorticity therefore has to decrease to compensate (2). This leads to southward movement, but the initial latitude (3) is overshot a little (4). This again leads to a change in relative vorticity (4), which brings the water parcel back to its initial latitude (5), but it overshoots again… So this mechanism leads to a wave-like motion in the horizontal plane, with the phase of the wave propagating westward.

If a current encountered a ridge, the water depth changes and the current thus gets deflected. This motion is called topographic wave: When a water column gets stretched, it gains relative vorticity, making it rotate cyclonically. When it runs into shallower water, it loses relative vorticity and starts turning the other way. 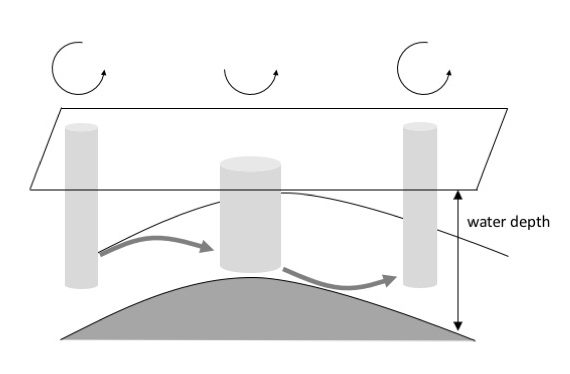 I’m hoping to set up demonstrations for both types of Rossby waves soon. Stay tuned! :-)

As you might have noticed, the last couple of days I have been super excited to play with the large tanks at GFI in Bergen. But then there are also simple kitchen oceanography experiments that need doing that you can bring into your class with you, like for example one showing that tides and internal waves by themselves don’t do a lot of mixing, and that only when they hit topography the interesting stuff starts happening.

So what we need is a simple 2-layer system and two different cases: One with topography, one without. And because we want to use it to hand around in class, the stratification should be indestructible (-> oil and water) and the container should be fairly tightly sealed to prevent a mess.

There definitely is a lot to be said for kitchen oceanography, too! Would you have thought that using just two plastic bottles and some oil and water could give such a nice demonstration?

As soon as waves run into water that becomes shallow enough for the wave to “feel” it, the waves start changing how fast they propagate. And depending on the shape of the topography, this often means that the waves change direction. This is called refraction and we can see it on many many different scales.

On a large scale, we see the wind waves coming down a fjord with long, straight crests, therefore not influenced by the sea floor yet . But when those waves come close to the shore, they start feeling the sea floor and react to that by being bent towards the shallower depth: Below, I have drawn the wave crests I want you to focus on: Straight crests coming in from the left, and then bent crests running into the mouth of the little bay to the right. Seeing it put like this, this might actually also be diffraction if we think of the mouth of the bay as of the widening behind a slit that the waves came through. Oh well.

But the same thing can also be seen on smaller scale, for example in the bay shown in the picture below. You can see some of the topography through the water, and you can infer some more: Wherever sea weed breaks the surface, water around it is probably shallower than water a little further away. And when you look closely, you can again see the waves reacting to the topography. Btw, this little bay is the one you see on the right of the picture on top of this blog post! And it is not only physics of water that make this place super interesting: repeat after me, Ib: Anemones! :-) Although it is pretty cool to spot more wave processes, like for example the wind shade — no waves phenomenon. Again on large and small scales: And you see the interference of waves coming round either side of those tiny “islands”.

Or just look at the beautiful blue water, the fjord, the snowy mountains in the back… Or at something completely different: The salt rings that remain when rock pools fall completely dry.

Anyway, I love it here. Thanks, Elin, for having me again!