“Informing” in quotation marks, because that’s what that phase is called in the AVIVO model which underlies the structure of the Methoden 2 go online! collection by EM Schumacher, in other models the same phase might be called something that implies more student activity, like “acquiring new knowledge” or similar. Anyway, here we go:

I’m a very visual thinker, so building cognitive maps is something I do a lot myself and like to encourage in my students, too. Below is an example of a concept map I asked students to draw before day 1 (left half) and day 9 (right half) of a course I was teaching. I can very well imagine asking students to use the last minute of a lecture (or maybe the first minute of a break in each lecture) to add to their concept maps over time. In the case shown below, the difference between what students expected to learn about going into the class and then what they learned about was quite interesting (and also maybe a function of “oceanography” usually being associated more with marine life than with physics), but students were quite proud of the complex maps that formed over the relatively short period of only two weeks, and it was a great way not only to visualise the concepts and how they connect to each other, but also how much they learned in such a short time! 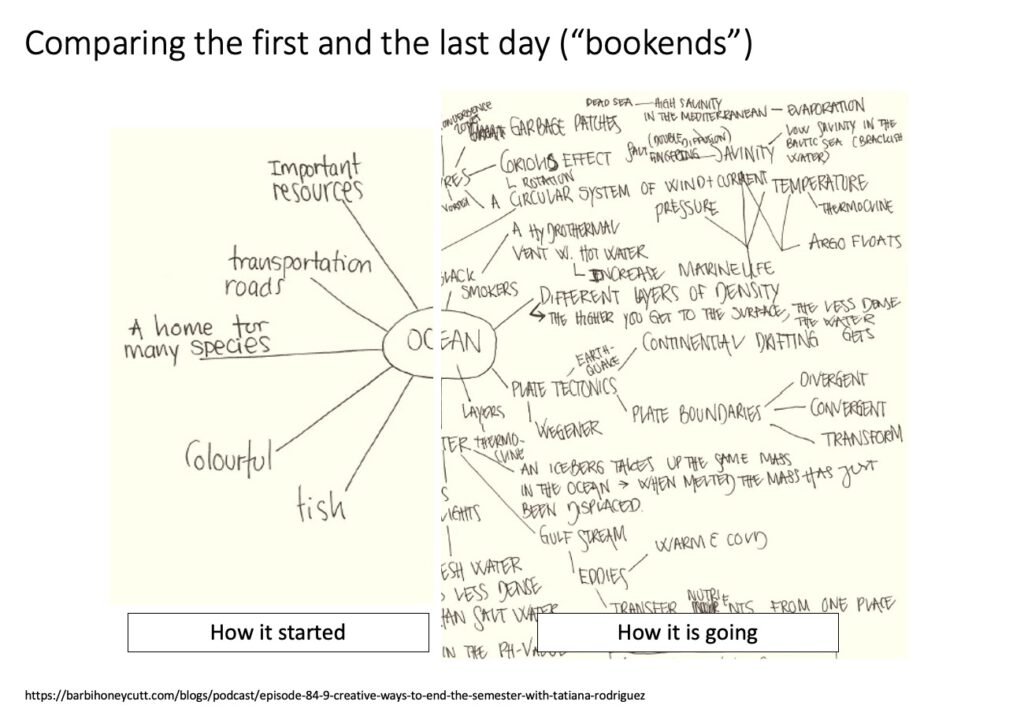 The suggestion in “Methods 2 go online!” is that the teacher presents a mind map of the topics of the course, and that’s definitely also helpful for students to see how what they are about to learn connects to last week or the week before (as suggested in the advanced organiser paragraph here). But I like involving students in the activity, too!

I wrote about this method here already (and how one might implement it virtually), and now I read the suggestions for virtual implementations: Doing the first phase (where two halves of the class read different texts or work on different exercises) asynchronously and then just asking mixed pairs to virtually meet up to discuss their respective texts. This also works well, of course!

I feel like this is a very short blog post, but then this topic is so huuuge that maybe starting small is actually the way to go. There are tons of other methods that I have talked about in other places, like for example group puzzles, but I’ll get back with more later!

That’s it for today! Next #TeachingTuesday we’ll be back with methods for “converting”!