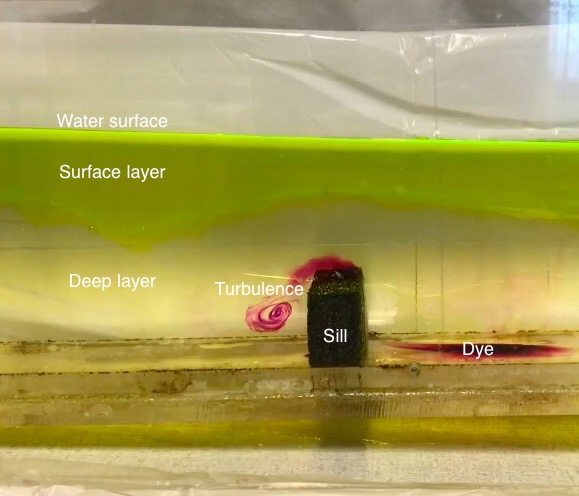 A solution for the siphon problem of the fjord circulation experiment.

After having run the fjord circulation experiments for several years in a row with several groups of students each year, Pierre and I finally figured out a good way to keep the water level in the tank constant. As you might remember from the sketch in the previous post or can see in the figure below, initially we used to have the tank separated in a main compartment and a reservoir.

But there were a couple of problems associated with this setup. Once, the lock separating the two parts of the tank fell over during the experiment. Then there are bound to be leaks. Sometimes we forget to empty the reservoir and the water level rises to critical levels. In short, it’s a hassle.

So the next year, we decided to run the experiment in a big sink and tip the tank slightly, so that water would just flow out at the lower end at the same rate that it was being added on the other side. Which kinda worked, but it was messy.

So this year, we came up with the perfect solution. The experiment is still being run in a sink, but now a hose, completely filled with water, connects the main tank with a beaker. The hight of the rim of the beaker is set to the desired water level of the big tank. Now when we add water to the big tank, there is an (almost – if the hose isn’t wide enough) instant outflow, so the water level in the tank stays the same. New setup: A bubble-free hose connecting the tank and a reservoir to regulate the water level in the tank.

This way, we also get to regulate the depth from where the outflowing water is being removed. Neat, isn’t it?

Tank experiment on a typical circulation in a fjord.

Traditionally, a fjord circulation experiment has been done in GEOF130’s student practicals. Pierre and I recently met up to test-run the experiment before it will be run in this year’s course.

This is the setup of the experiment: A long and narrow tank, filled with salt water, a freshwater source at one end and an outlet at the other end. This sets up a circulation from the head towards the mouth of the fjord close to the surface, and a deep return flow. We think we observed Langmuir circulation, but we don’t understand the mechanism causing it.

Recently, my friend Leela came to visit Bergen and we went on a fjord cruise to make the most of a sunny October day. We observed foam streaks on the fjord. The structures were long and persistent, and being the oceanographers we are, of course we knew that they had to have been caused by Langmuir circulation. But then we started wondering about the mechanism driving the Langmuir circulation. Textbook knowledge tells us that Langmuir cells are spiraling rows with convergences (the foamy stripes) and divergences (in between the foamy stripes) at the surface. They are, according to common knowledge, caused by wind that has persistently blown over the surface for more than some 10 hours, and by Ekman processes. Plus there might be some interaction with waves. But that’s about where my knowledge ends, and I have absolutely no mechanistic understanding of Langmuir circulation. Literature research was unsuccessful (at least in the period of time I was willing to spend on this), a quick poll of my colleagues didn’t help, so now I am turning to you, dear readers: Do you have a simple mechanism for me that explains Langmuir circulation? Please help!