For some reason my workflow regarding all things #KitchenOceanography and #WaveWatching changed at the beginning of this year. I started editing frames on the pictures I’m posting on Instagram, and, since I was most likely doing this on my computer anyway, scheduling the posts through a program on my computer, which meant that I was typing captions on the computer, too, writing a little more. But somehow that meant that I had already written everything I wanted to write about the pics and didn’t feel the urge to blog later, so … I didn’t. Until now, that is!

Here is a collection of my Instagram posts on coffee in #KitchenOceanography! 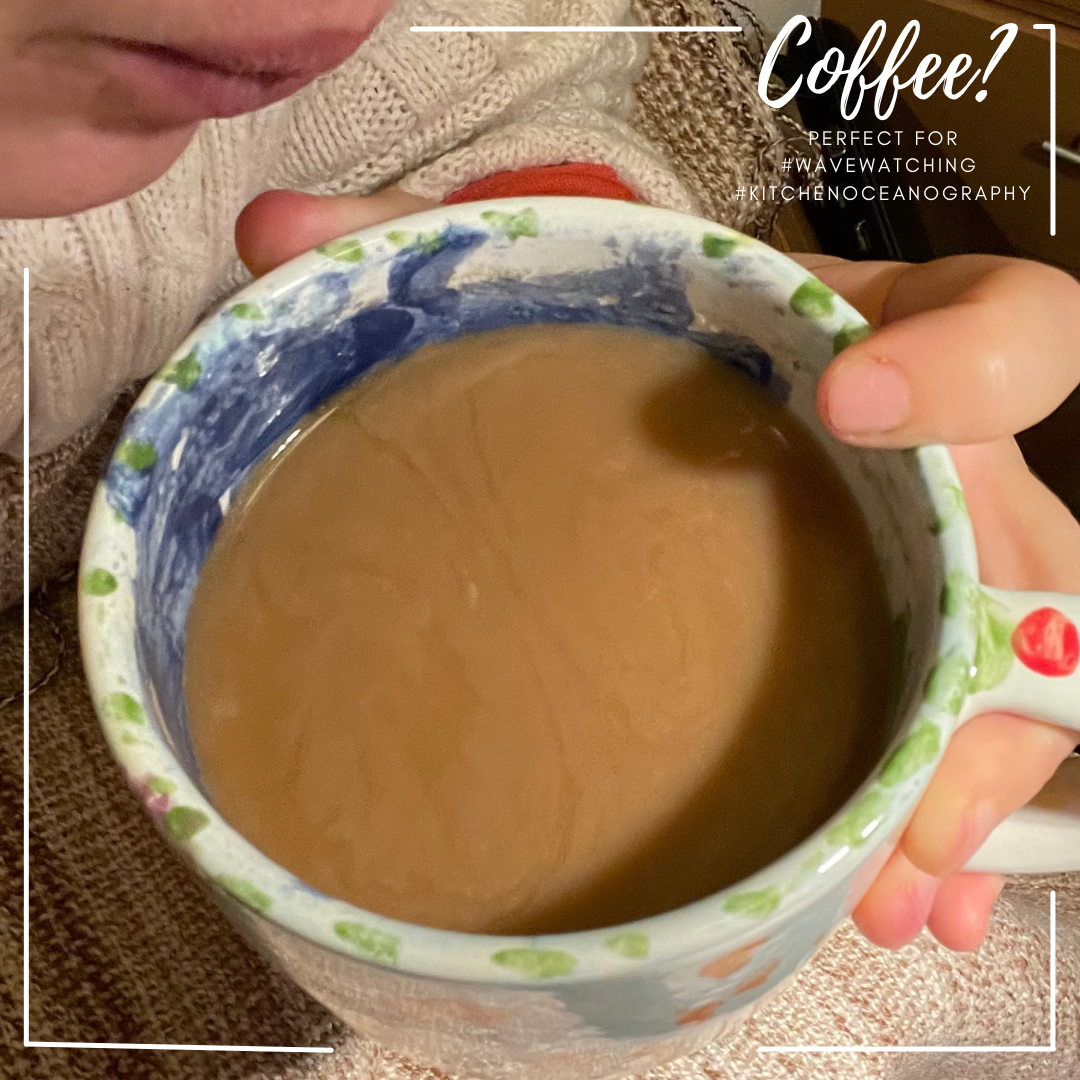 Enjoying your lazy first morning coffee of the year (or already back from your New Year’s morning walk, but forgot to take pictures — what’s wrong with you, 2021?)? Then it’s a perfect opportunity to look at wind-induced currents in your coffee! Gently blow across the cup and observe how two counter-rotating eddies develop. This becomes especially clear if you take milk in your coffee (or something else that creates a surface film). Enjoy! 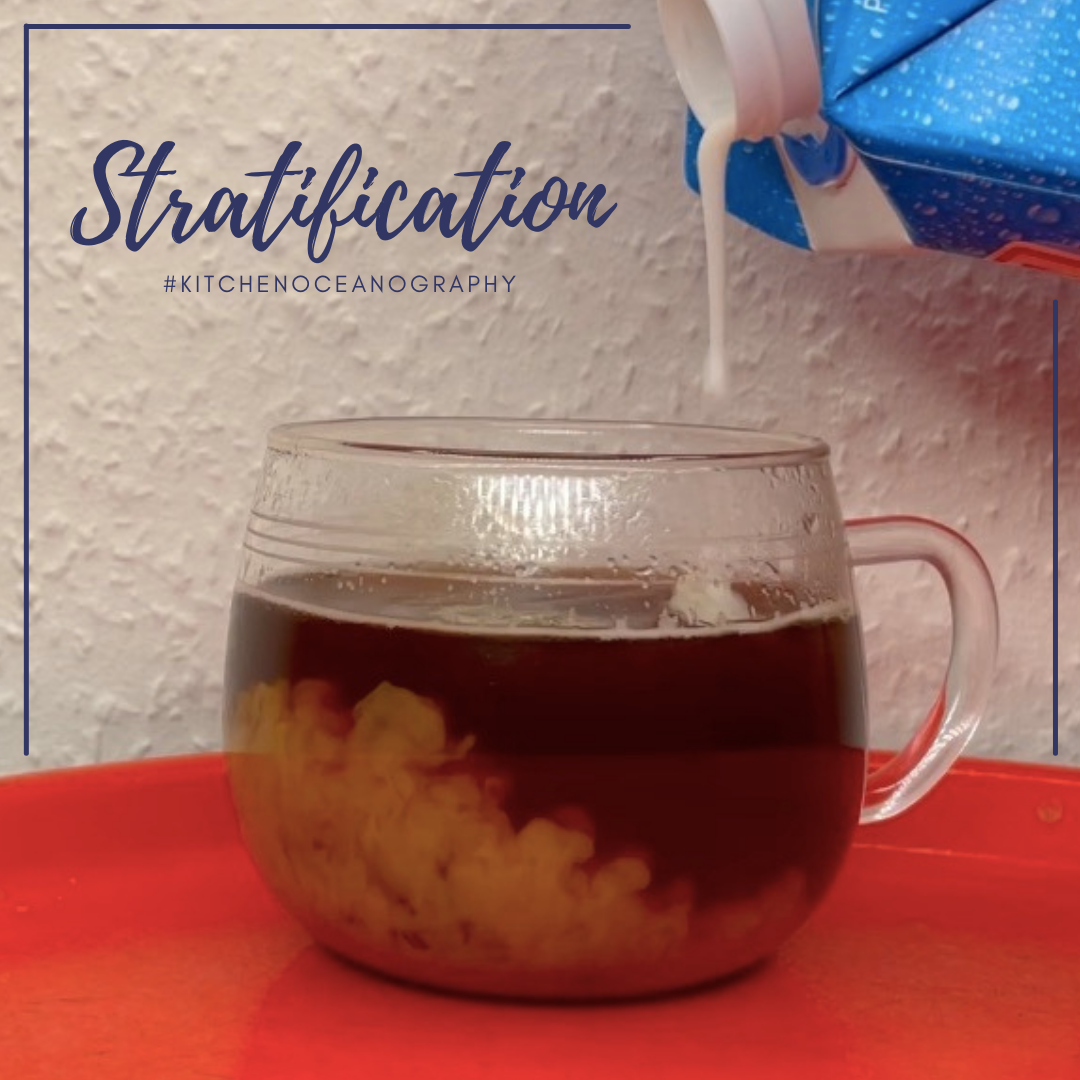 Maybe not The Best Thing about morning coffee, but definitely very important: Observing what happens when you pour milk or cream in! Here the cold milk is denser than the coffee, so it sinks down to the bottom of the glass (it would probably even shoot to the bottom of the glass if it was the same density as the coffee since it’s coming in with a lot of momentum). Hitting the bottom, it shoots along the curved rim of the glass and up in these cute little turbulent billows. But eventually, it will settle on the bottom of the glass, forming a denser layer under the less dense coffee — that’s what we call a stratification, both in density and in coffee&milk. And it’ll stay like that for a little bit, until other processes come into play. So stay tuned for those :-D⁠ 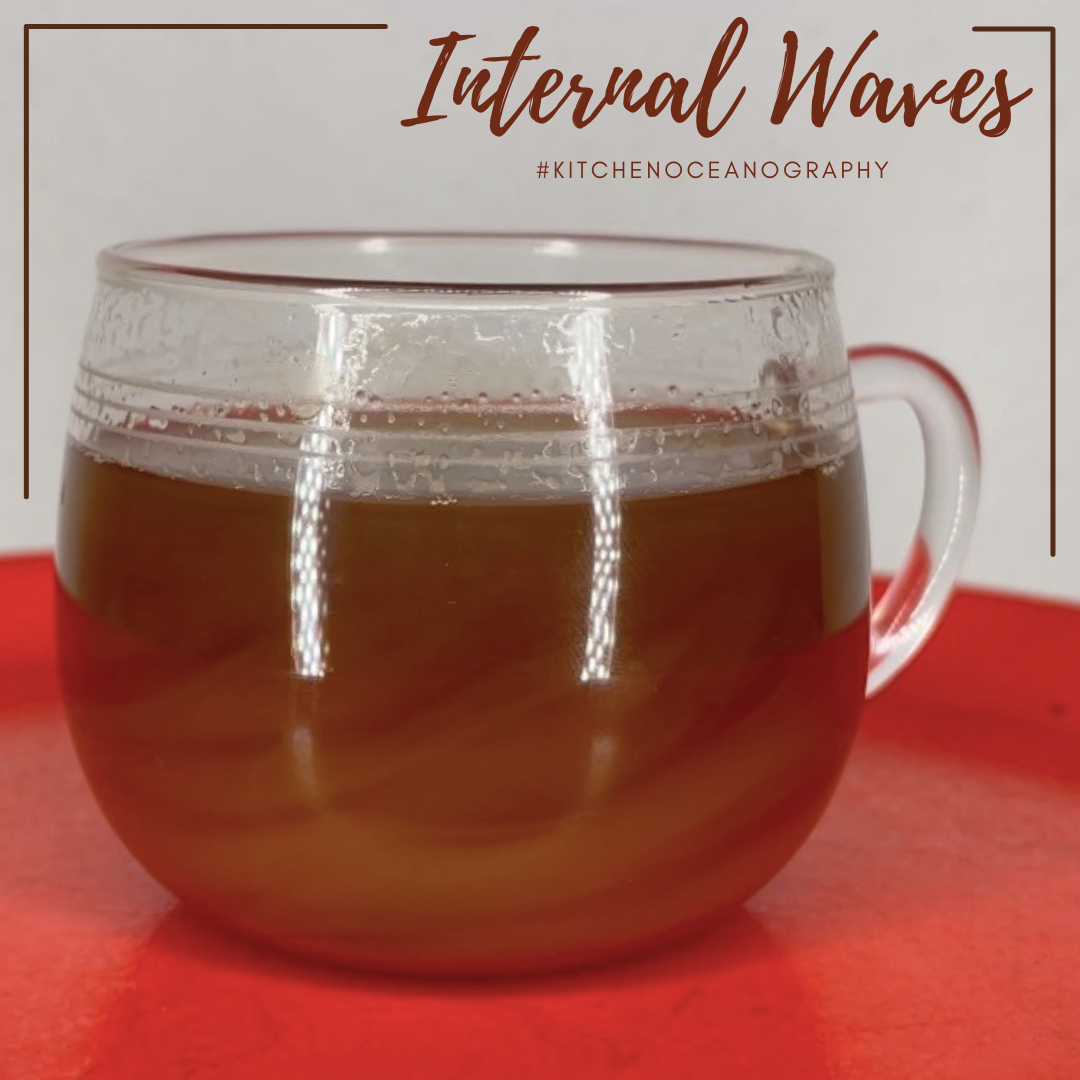 Actually, not only internal waves, but also current shear!⁠ When you pour milk into coffee, the milk will form a layer at the bottom of the coffee. Similarly to when you poured the coffee in and it surface leveled out, the surface of the milk wants to level out. And similarly to the waves that you probably observed initially on the coffee when you poured it in, waves appear on the interface between milk and coffee. Except that these waves have larger amplitudes, move more slowly and persist for longer. That is because the density difference between milk and coffee is orders of magnitude smaller than that between coffee and air. Those waves are called “internal waves”.⁠ And what we see in the pic, too, is that the milk layer is moving relative to the coffee layer, therefore the wave crests are being pulled into these sweeping strands. Pretty awesome!⁠ 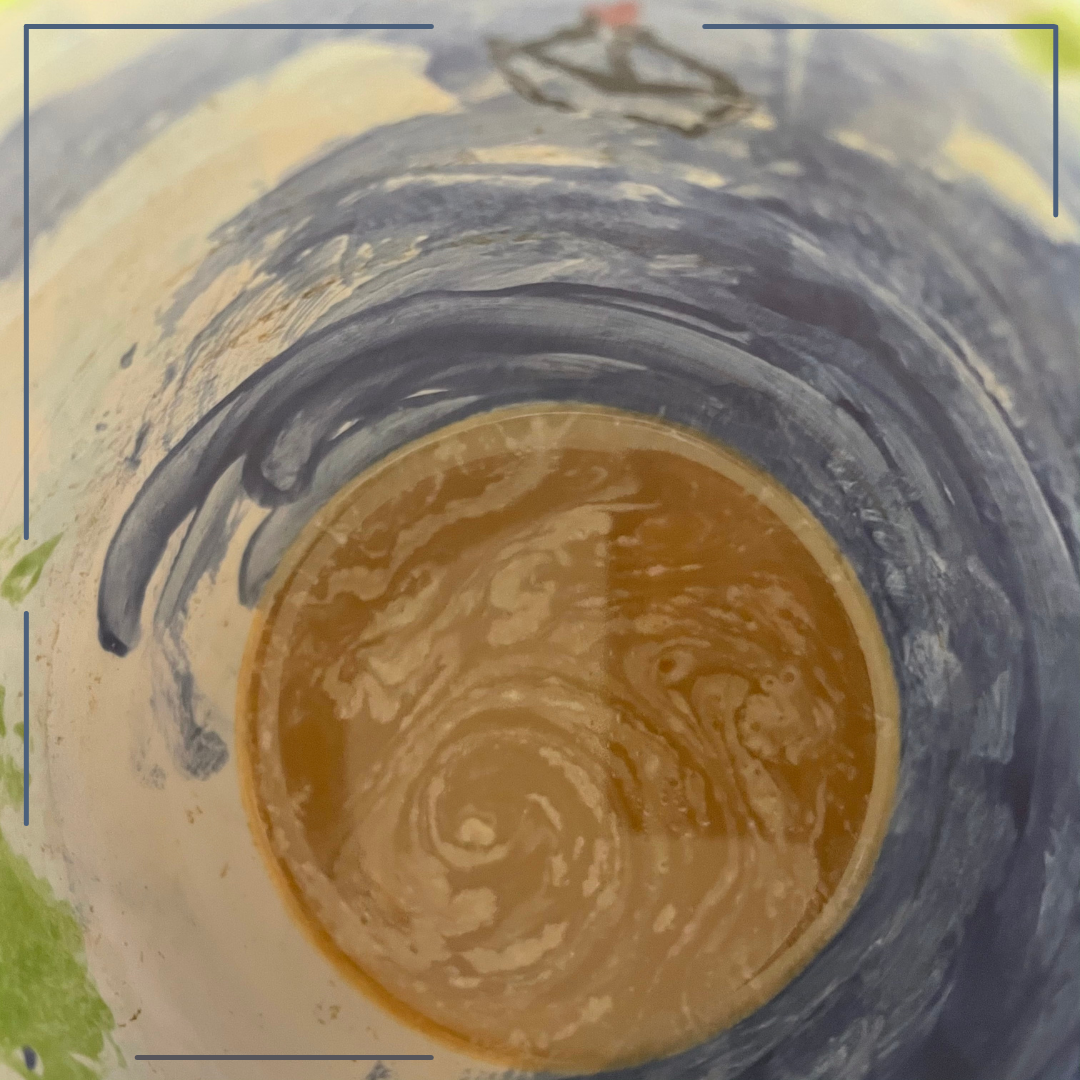 My sister & nieces made this mug for me for Christmas. Isn’t it just perfect together with the swirl in the last bit of my coffee? I’m considering making this my logo and profile pic and EVERYTHING because I think it is Just. Perfect.⁠ 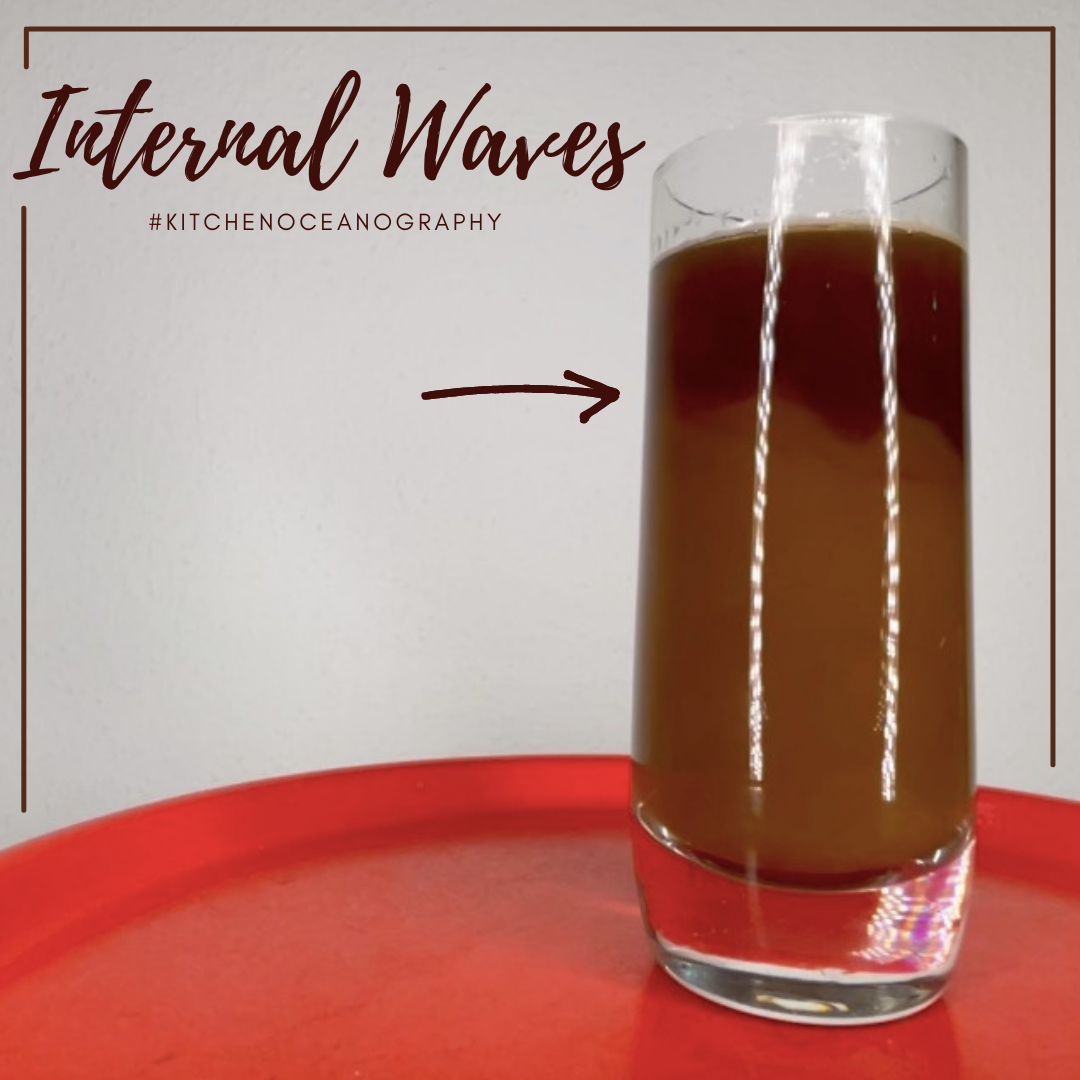 I’ve been playing around with different glasses and different ways of lighting them in order to get clearer pictures of the things I want to point out: The behavior of the fluids, not reflections on the side walls of the tanks I am using. At least here there are only two stripes where the light is reflected? And the internal waves on the interface between milk at the bottom and coffee on top come out quite clearly. Even from this photo you can see how dynamic the system is!⁠ 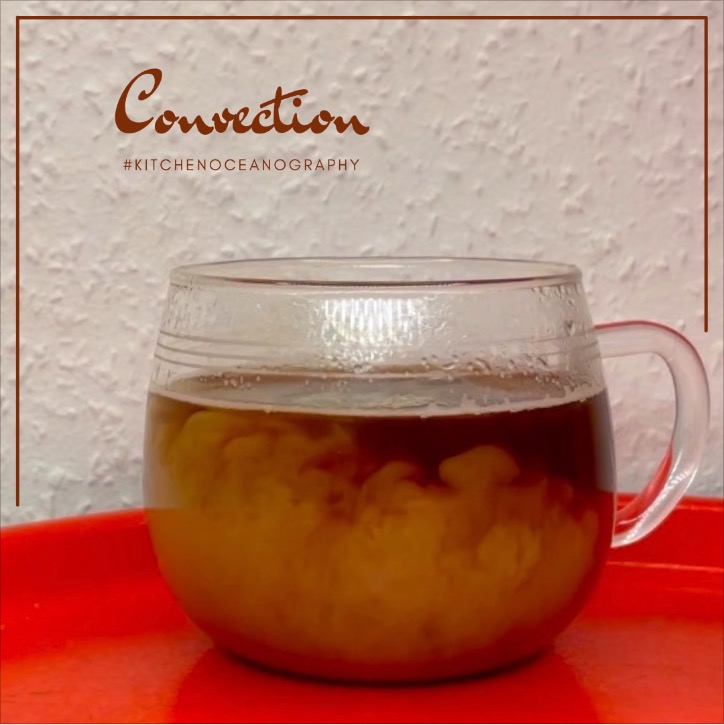 Again, there is a milk layer at the bottom of the coffee. And those mushroom-y milk fingers appear when the milk is warming up and its density is thus decreasing. As it gets less dense than the coffee, the stratification becomes unstable and milk starts rising until it reaches a level of its own density.⁠ 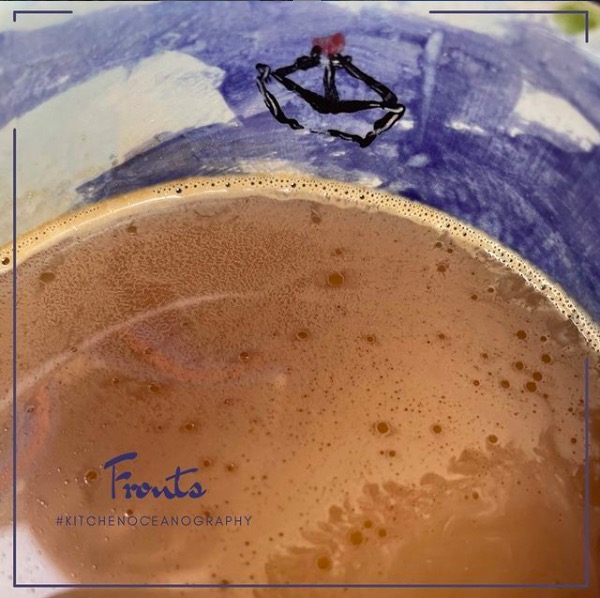 Today there is some interesting surfactant on my coffee. It might be due to oils in last night’s tea that I didn’t clean off, or maybe it’s the cream (but I would think that that’s the little blobs of oil you see). In any case, the surface film behaves in very interesting ways: It is showing us a front in the coffee, with lots of small instabilities on the front! The front must be related to me drinking from the mug somehow, but I’m not sure how. Thanks to the surface film, we also see convection occuring in the top left, where we get all those small-scale structures in the color, lighter areas indicating convergence zones where the surface film gets pushed together, darker areas where it is pulled apart. 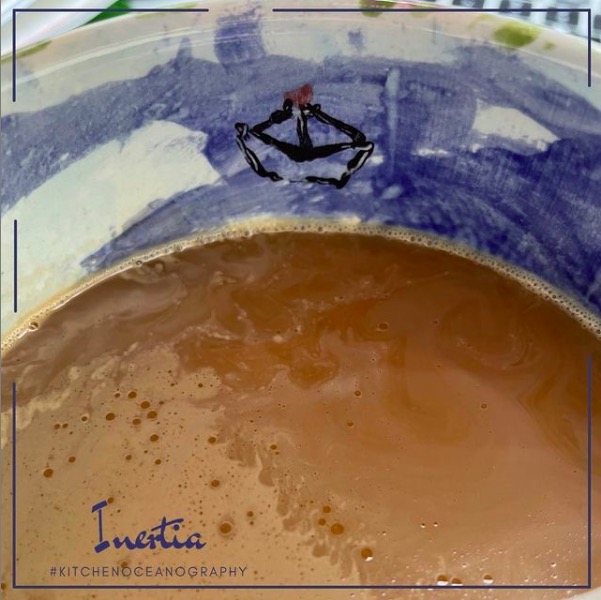 A little while ago I posted a picture of the front you see in my coffee here. And what I did then was twist the mug a little bit: I wanted the front to be in the picture more nicely together with the little boat. BUT: exciting things happened (predictably): As I was twisting the mug, it did not behave as a solid body together with the coffee. Rather, it twisted while the coffee was not! And this created shear between the sidewalls of the mug and the coffee, which is what we see all around the edge: shear instabilities breaking into eddies! And all that due to inertia of the coffee.

Related Posts to "Coffee in #KitchenOceanography":