For our project “Ocean currents in a tank: From dry theory to juicy reality“, Torge, Joke and I are working on building affordable rotating tanks to use in Torge’s Bachelor class on ocean and atmosphere dynamics. When people ask what we need rotating tanks for, the standard answer is that rotation of the tank simulates rotation of the Earth. Which is of course true, but it is not really satisfying because it doesn’t really convey the profound effect that rotation has on the behaviour of the ocean and atmosphere, which is actually very easy to show in a quite dramatic way (at least I think it’s dramatic ;-)).

Imagine a cylindrical tank filled with fresh water. In its middle, we place a (bottom-less) cylinder filled with dyed, salty water. When we lift the cylinder out of the tank, the blue dye is released into the freshwater. And depending on whether the tank is rotating or not, the blue water behaves very differently.

The picture below shows top views and side views of a non-rotating and a rotating experiment, taken after similar amounts of time after the “release” of the blue water. 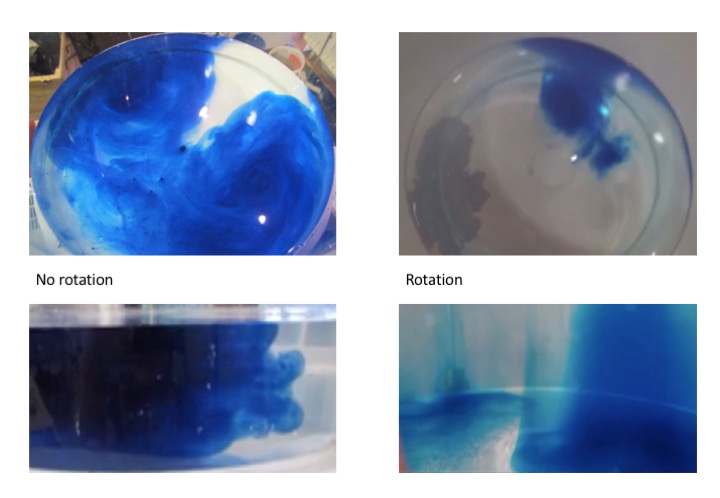 Let’s focus on the top view first. In the non-rotating experiment, a dipole of two counter-rotating eddies develops within seconds of the central dense column being released, spreading blue water pretty much all throughout the tank. In the rotating experiment, after a similar amount of time, the dipole looks different: Even though the same amount of dyed water was released, the two eddies are much smaller and much more well-defined.

In the side view, the difference becomes even more clear. In the non-rotating experiment, looking at the boundary between the blue and clear water, we see eddies moving water in all directions, so in combination with the top view, we know that turbulence is three-dimensional.

In the rotating experiment, however, the boundary between blue and clear water looks very different. There is a clear separation between a blue column of water and the clear water surrounding it. From the side view, we don’t see any turbulence. We know, however, from the top view that there is turbulence in the horizontal plane. In the rotating case, turbulence is two-dimensional.

P.S.: Images for this post were originally posted in this post (and in other posts linked therein) 5 years ago. Hoping we’ll have new images soon when our new tanks are up and running! :-)

Related Posts to "Why do we need a rotating tank to study ocean and atmosphere dynamics? A demonstration":

2 thoughts on “Why do we need a rotating tank to study ocean and atmosphere dynamics? A demonstration”