A bicycle safety flag, a plastic bucket, four paint roller trays — what are those people doing there?! Until now this might almost count as kitchen oceanography!

But it’s only almost kitchen oceanography; at least my kitchen isn’t usually stocked with GPS trackers, which is what is mounted on this contraption. Let alone the research ship we used to deploy it. So this must surely count as real oceanography then! 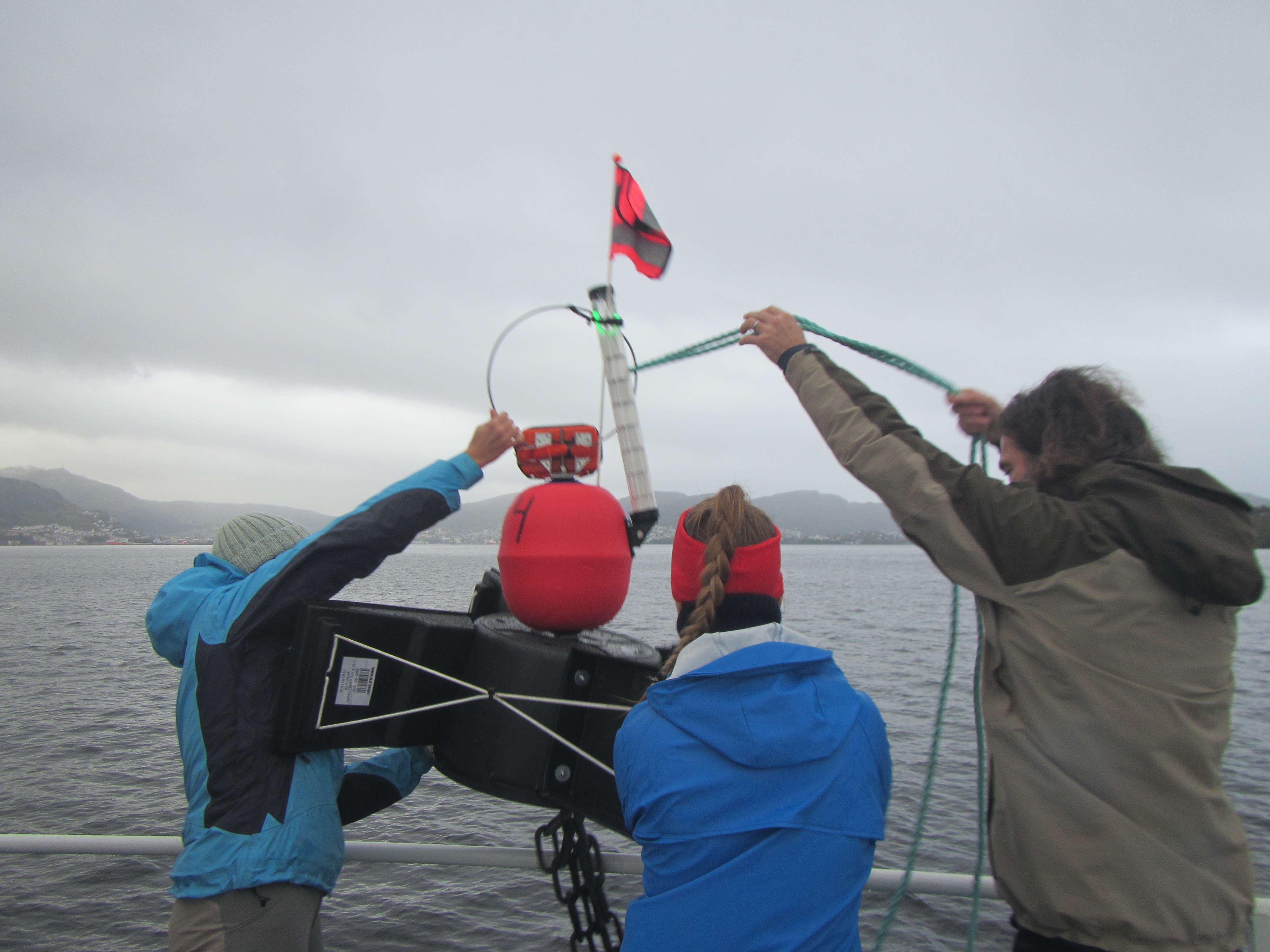 Above, you see  Lars Henrik and his students deploying a surface drifter. The red buoy keeps it floating at the surface, the chain hanging below is heavy enough to make sure it stays upright. The bucket and four paint roller trays act as sea anchor so the whole thing moves with the water rather than being blown about by the wind. A safety flag, radar reflector and light make sure nobody accidentally sails over it, and the GPS sender lets the position be tracked. 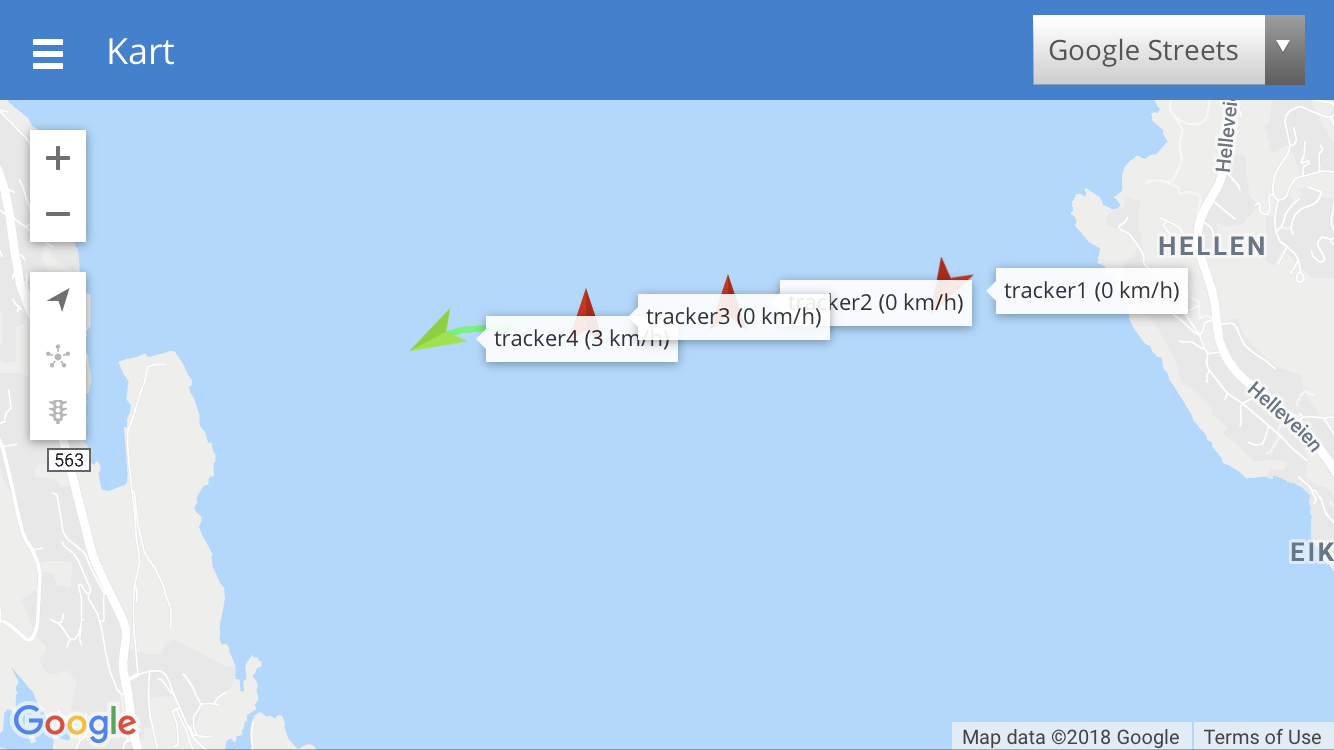 Above, you see what it looked like when we had already deployed three of our four surface drifters (the red ones that are moving so slowly that the software tells us they aren’t moving at all), while the fourth one is still onboard the ship, moving to the position where it will be deployed (the green one moving at 3km/h).

Following surface drifters’ paths in real time is pretty awesome in itself, but what makes it even better is that the GPS positions can be accessed online from any device. Below, for example, you see the positions on my phone with the drifters behind it in the water (if you look really closely, that is. But they were there!). 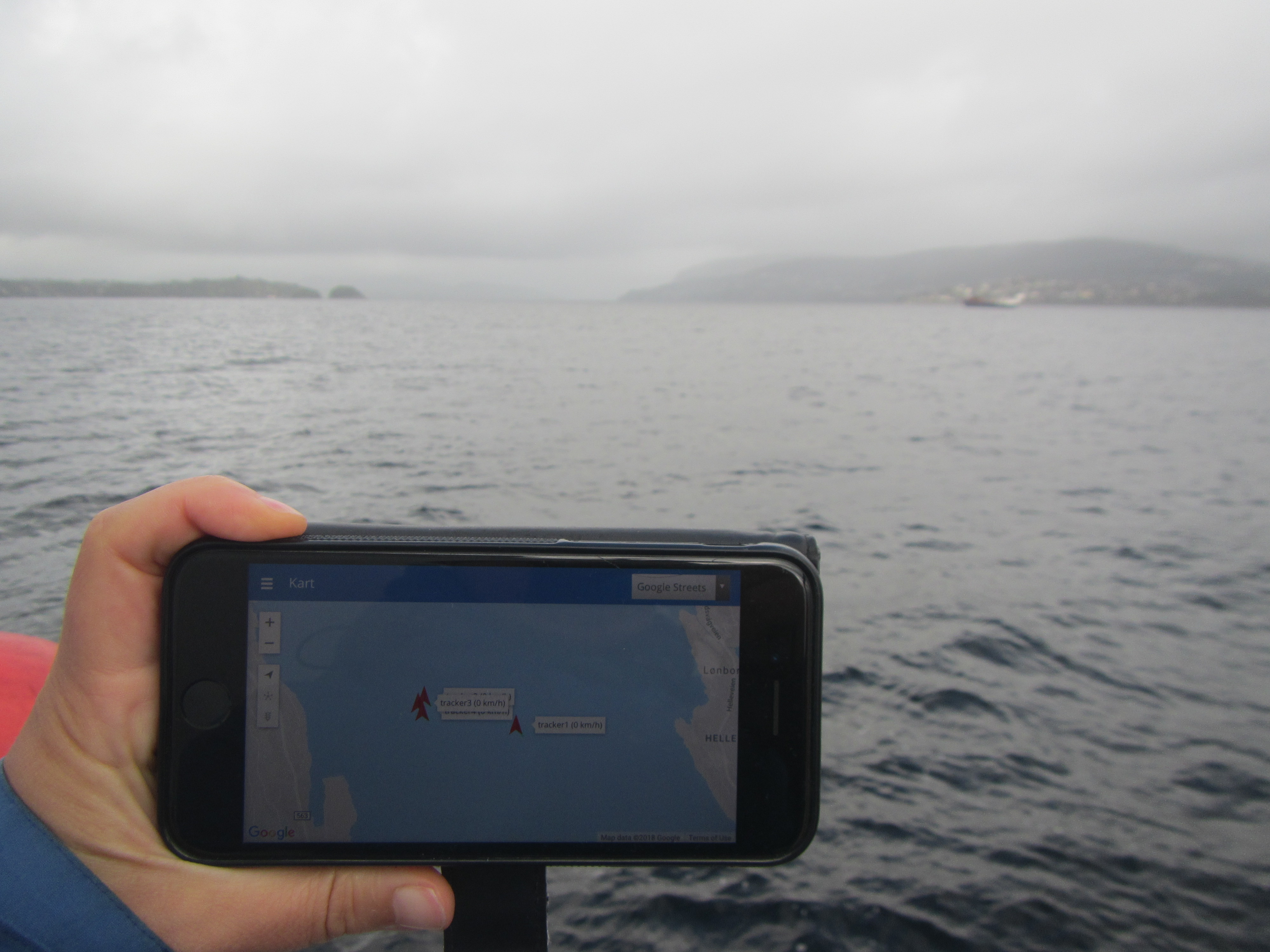 What you also see is that three of the drifters have huddled together after a couple of hours out in the fjord. Nobody really knows why yet, but that’s what we are here to find out!

Just from observing the wind and the movement of the drifters throughout the day, it seemed that the surface circulation in this fjord is dominated by the wind over the tides. But there will be a Master’s thesis written on the data we collected today (plus a lot more data and a regional ocean model!) so we’ll soon know how good my assumptions are and what really drives the surface currents here. 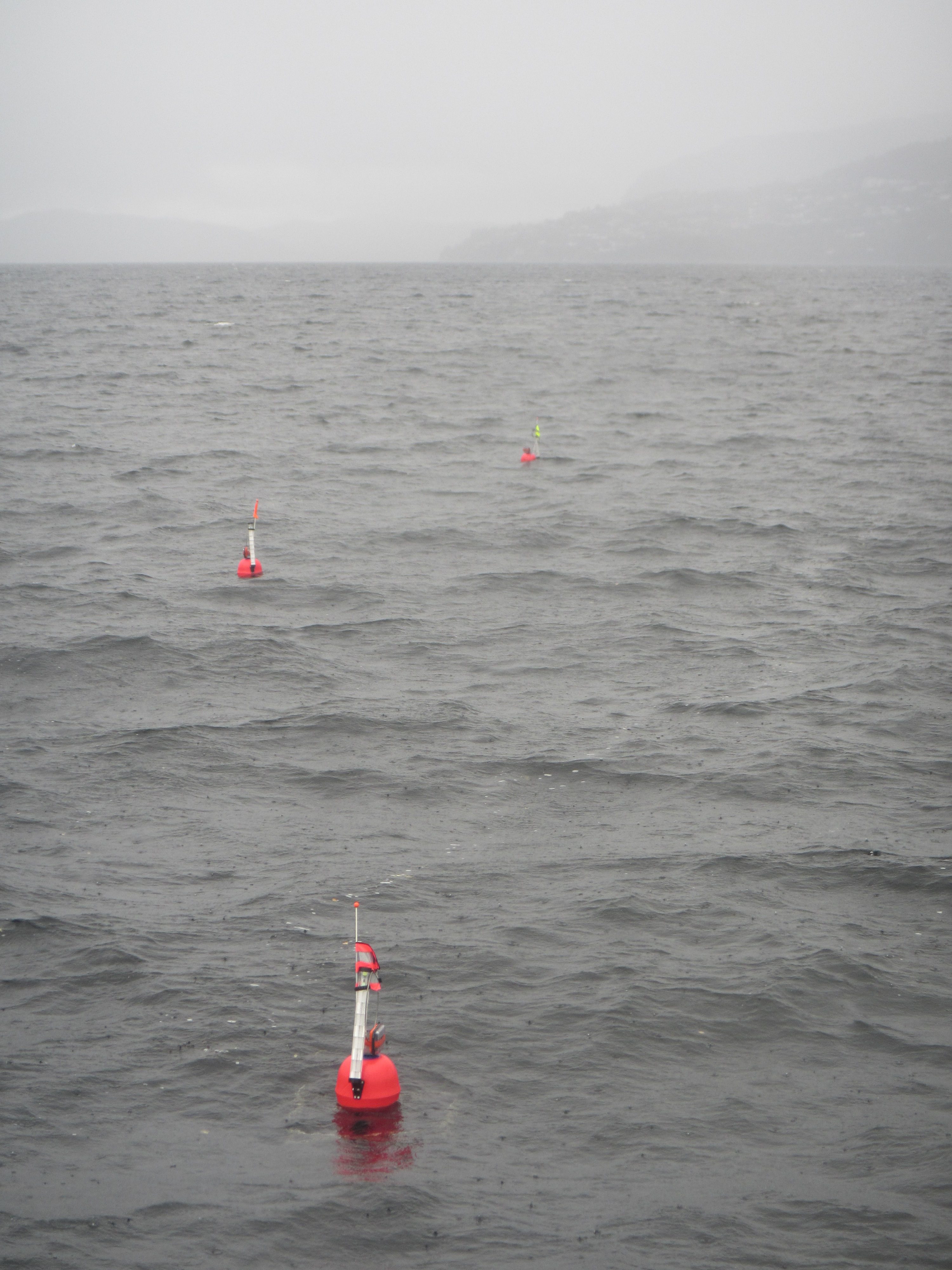 Come time to recover the drifters, the weather wasn’t quite as nice as earlier throughout the day. Just to give you an impression of the conditions under which the drifters were recovered: 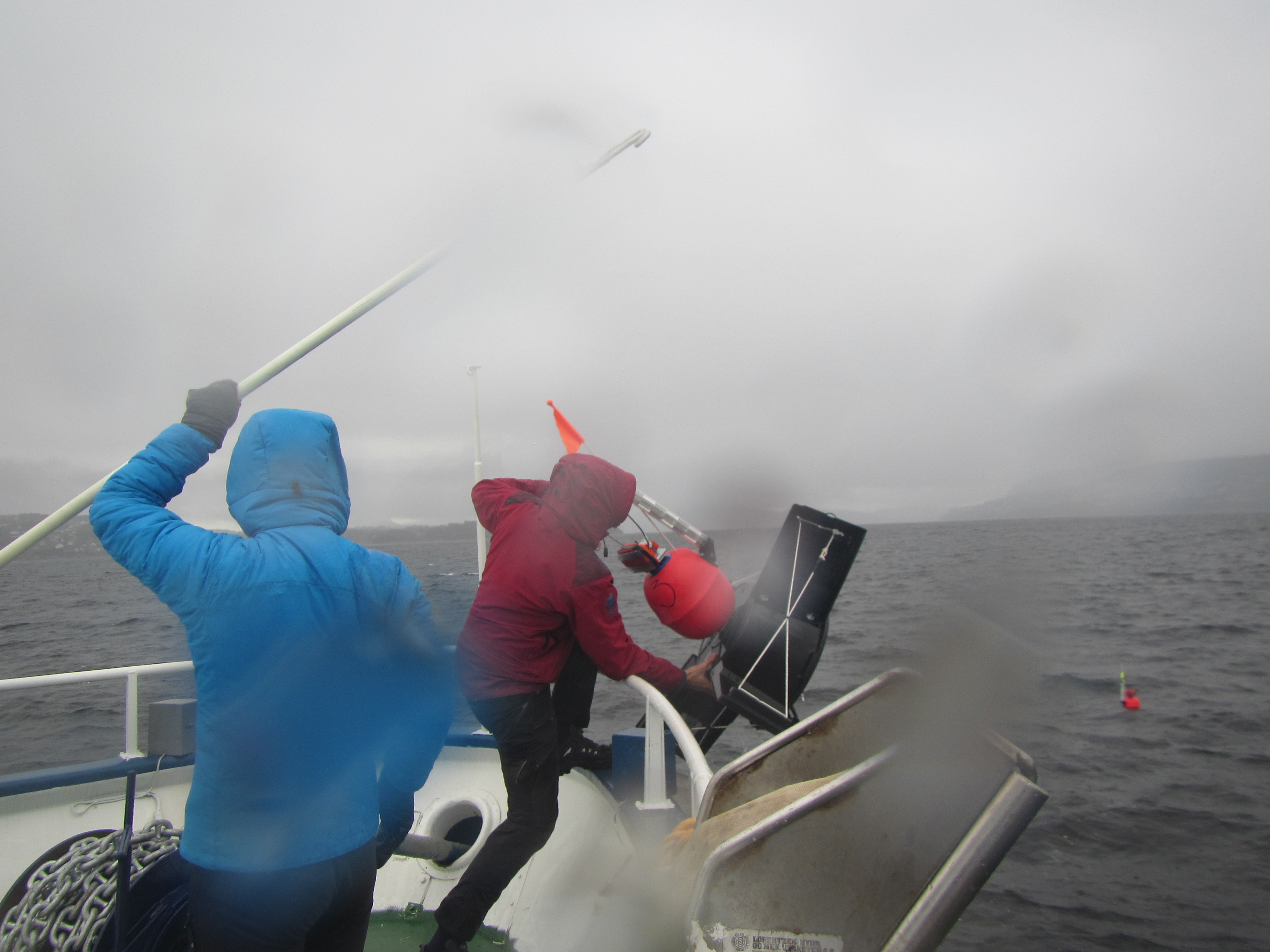 Algot and Inga recovering a drifter

Yep, if you look at the sea state, there is nothing to complain about, really, just a little water coming from the sky! But it was cold water… ;-)

And everything got recovered safely and made it back to port — ready to be deployed again tomorrow to gather more data and understand the fjord a little better. Exciting times! Thanks for letting me be part of this GEOF105 adventure, Lars Henrik! 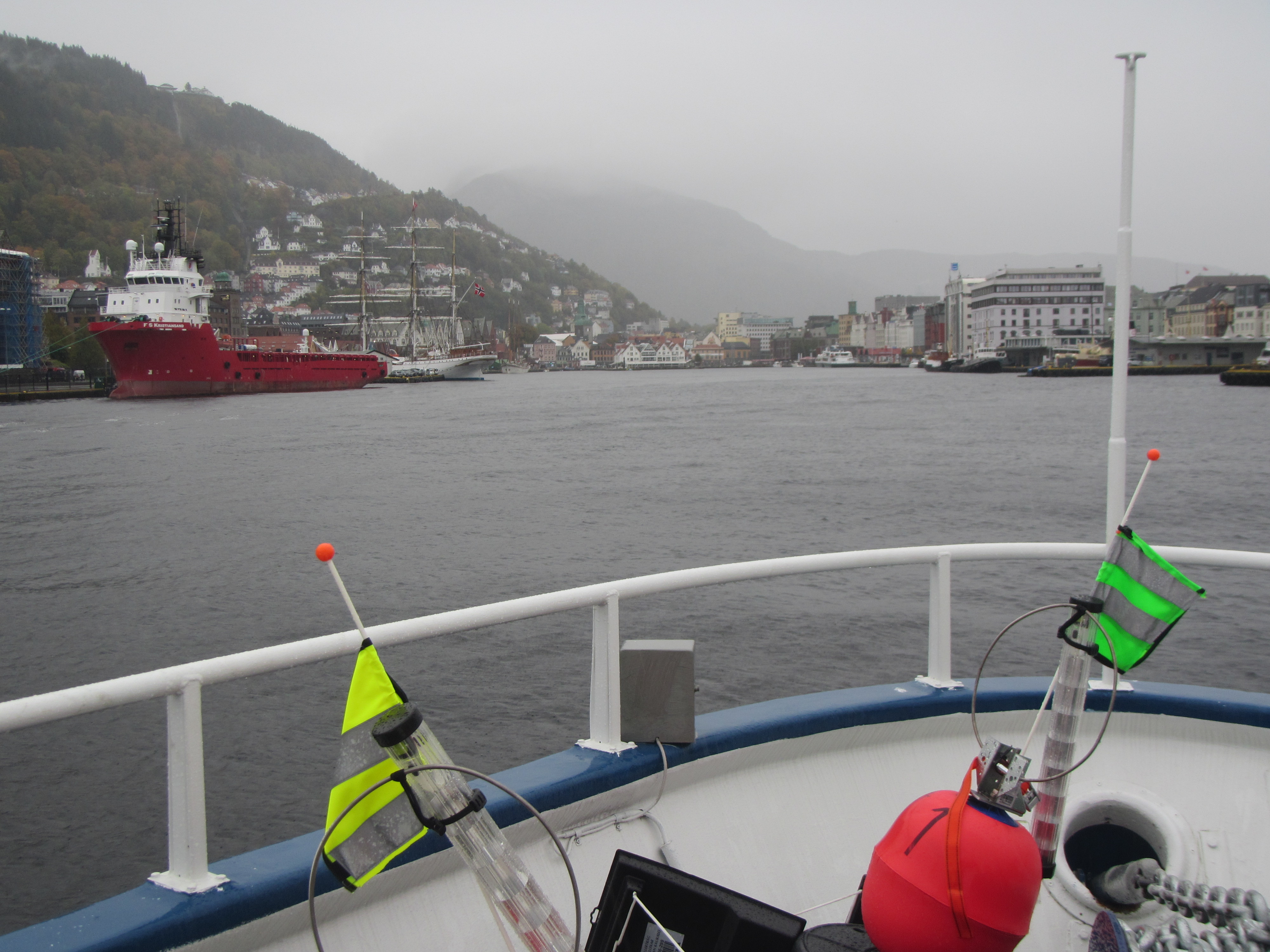 The drifters coming home to the port of Bergen