It has been bugging me for a while that on days where there isn’t a lot going on in terms of regular wave watching, I often see ripples in the sand and don’t understand what’s determining their wavelength, their shape, everything about them. So what better use of a quarantine weekend than to browse old pics, and do a literature search to try and figure out what’s going on?

There surely is a “wave ripple 101” textbook out there somewhere, but I didn’t find it (even though I know fossilized wave ripples are sometimes used to draw conclusions about prehistoric wave regimes and stuff, so there MUST be textbooks on this? What search term am I missing?), so I had to make sense of the information I did find. If you know better or know where to find better information, please let me know!

How sand ripples form in a current

Basically like waves form in water, except without the help of surface tension.

When water is moving relative to a sandy bottom, there is a critical speed at which sand grains are going to start moving with the current. Currents faster than that speed are going to erode the sea floor, taking sand with it, currents slower will allow sand to fall out of the current and settle.

Imagine a current over a sandy bottom. If the bottom isn’t completely flat but there is a tiny imperfection somewhere, this will influence the bottom current: speeding it up the higher the bump is (i.e. the smaller the cross section of the current becomes) and slowing it down when the cross section widens again (see here for the classical fluid dynamics Venturi tube experiment that shows exactly that). So a current flowing over a bump will be sped up. Looking closely at the bump, it has an asymmetric profile: A gradual incline on the upstream side (apparently called the “stoss side”) and a steep drop on the lee side. Sand is being eroded from the upstream side where the current is strong, and being deposited on the lee side where the current is weak, thus slowly moving the bump forward.

In slower currents, sand grains are being rolled up the upstream slope of the ripple, are pushed over the edge and tumble down on the other side. In faster currents, an eddy is going to form downstream of the bump, similar to a lee water in a river, and grains are “flying” over this eddy and deposit on the stoss side of the next ripple.

How sand ripples form in waves

In the end, waves in shallow water (and they have to be in shallow water for the sea floor to feel their influence in the first place) are nothing else than alternating currents as the orbital movement within the waves is deformed into elipses with a back-and-forth current right at the bottom. So ripples in waves form in a similar way to ripples in currents, except that they are more symmetric and (probably?) don’t propagate.

I think this is what has been bugging me most for a long time, because I was trying to figure out some kind of dependency on wave length of the water waves or something, but now I think it’s actually quite simple (Please check out the disclaimer above…): I think it’s a mixture of grain size and current speed.

The influence of current speed

The faster the current, the longer the wavelength of the ripple. This makes sense since in stronger currents, grains are transported further away from the ripple they were erodet from until they deposit again and form the next ripple.

The influence of grain size

If sand grains are too small, they don’t form ripples (or they are just extremely flat). However, if the grains are more like stones, they are not moved into ripples anymore, either, but instead create a turbulent flow around them. But for the happy medium in between, I think the larger the grain, the larger the ripple (both in length and in amplitude).

Of course, it’s not only grain size, it’s also tons of other factors like grain shape (that will influence cohesion between grains) or bio growth like bacterial mats, that will also make it more difficult for grains to be moved.

Note: All pictures of wave ripples I am showing here were taken in Kiel fjord, looking down from the sea wall into the water. There is usually a bit of the sea wall still visible for orientation, and further away from the sea wall the sky reflects on the surface. This is not ideal, but it’s all I have to work with right now.

Let’s check out the picture below: Here we see quite regular wave ripples, except very close to the sea wall (where the sand appears flat, possibly because the water is very shallow there), and close to kelp (where the sand is flat, too, but probably due to wave-plant interactions; i.e. either the plant taking energy out of the wave field and dampening the wave, or the plant being moved over the sand by the waves, thus wiping out any ripples that might have been there). 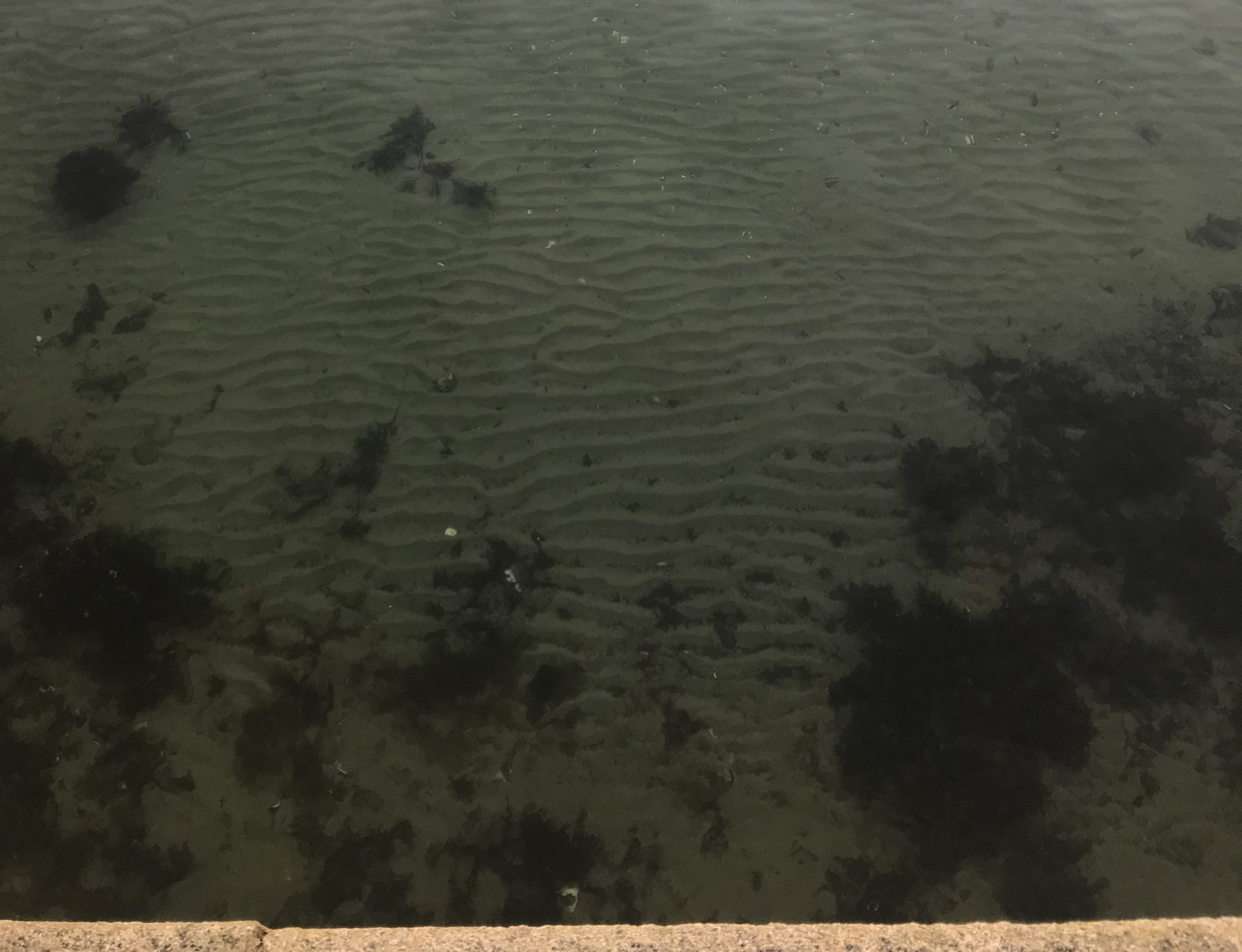 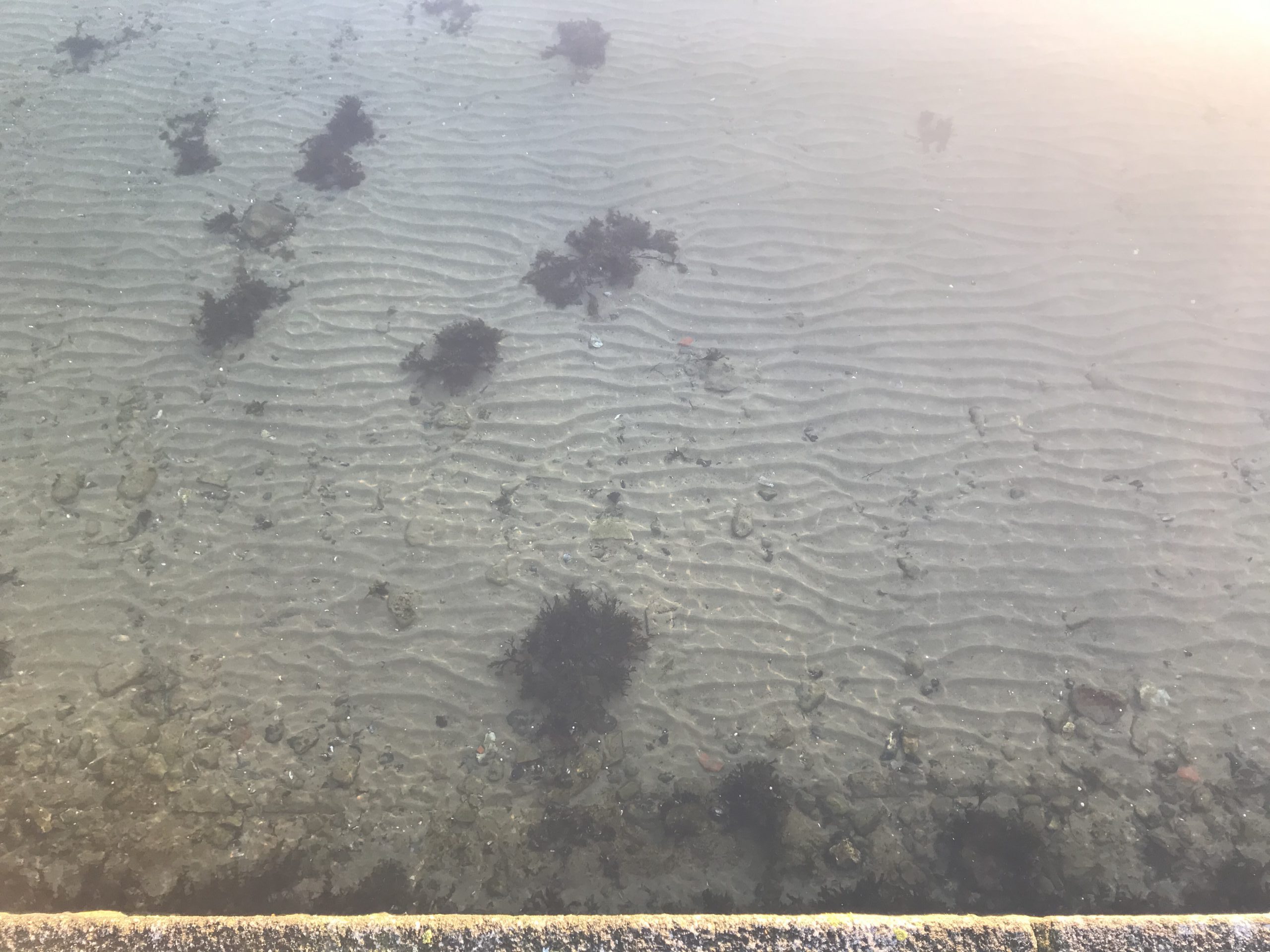 Sometimes ripples are a lot less regular and look a lot more choppy. Not surprising seeing that often waves get reflected at the sea wall at an angle, creating a checkerboard pattern of wave crests, thus not only a back-and-forth orbital flow, but probably more of a circular one. But why is there still a predominant direction of wave crests then? Does anyone know?

Below you see what I mean: In the upper corners of the picture you see the water wave crests at an angle to each other. 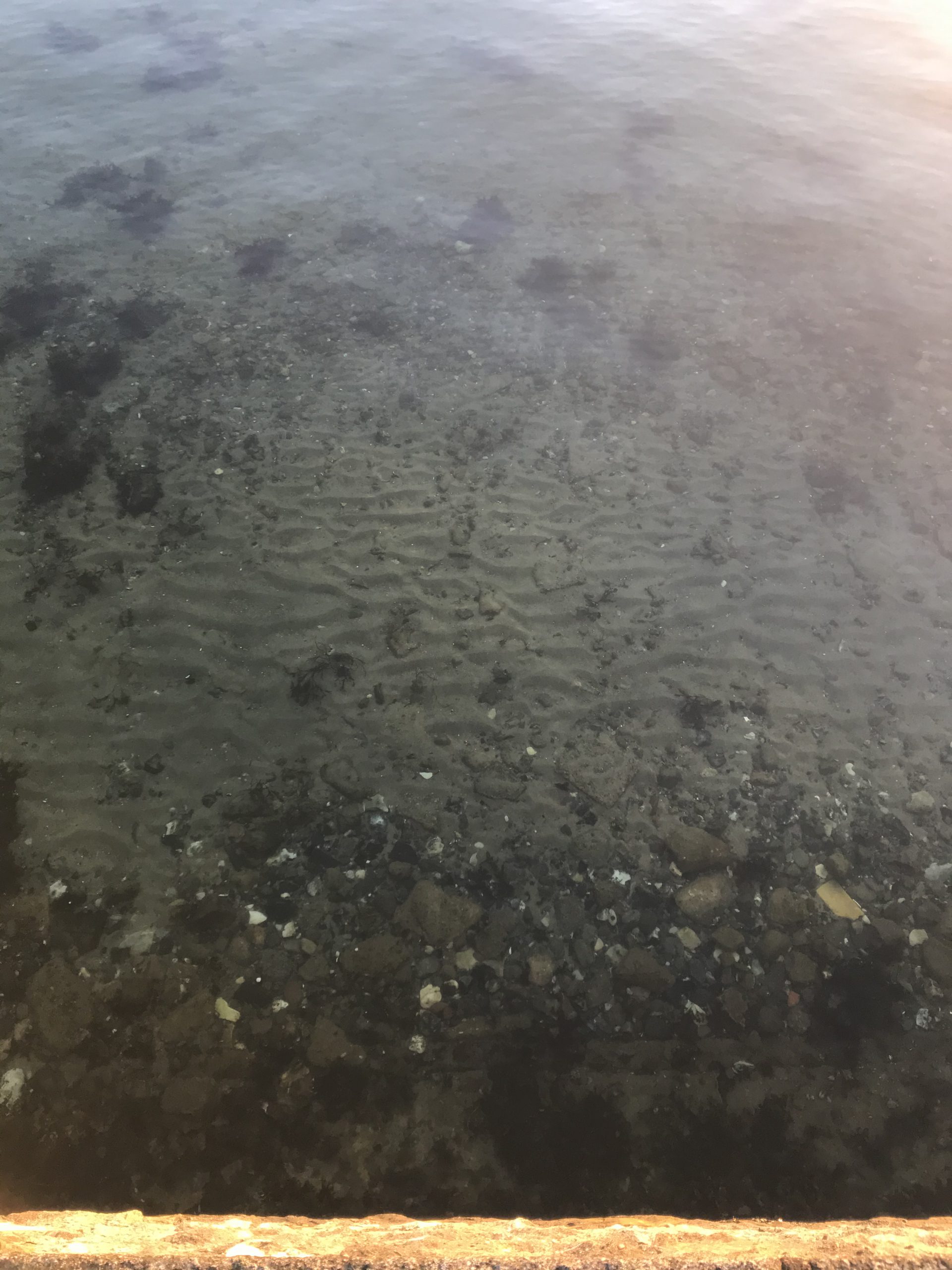 The picture below I find really beautiful with this nice wavy pattern.

And here, we see very different structures in different spots — some more regular, some very choppy. 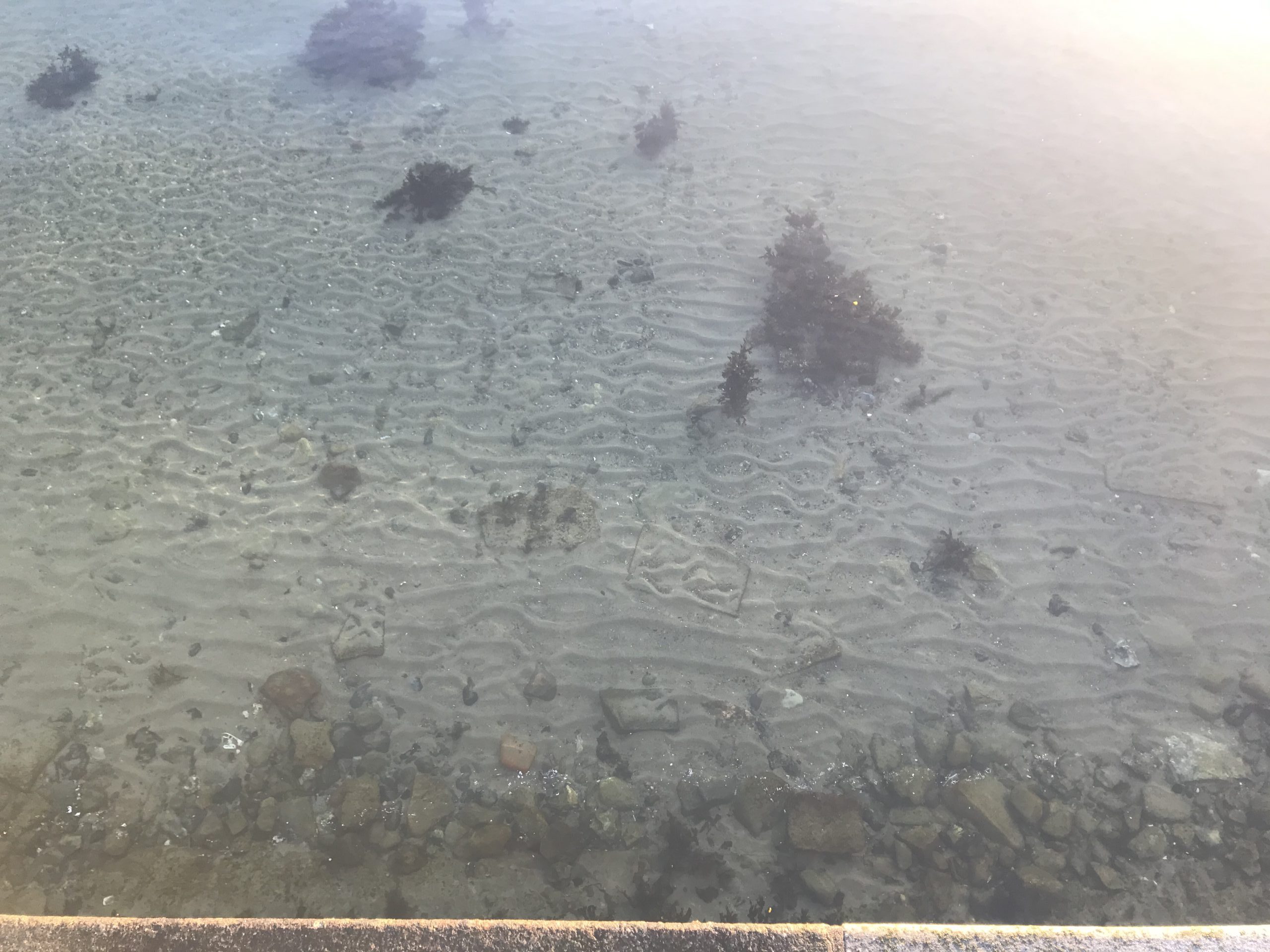 And there is a lot going on in the picture below. We see an effect of grain size with coarser grains not showing many ripples and the fine mud not showing any, either. But that might also be due to algae mats protecting the mud from erosion? 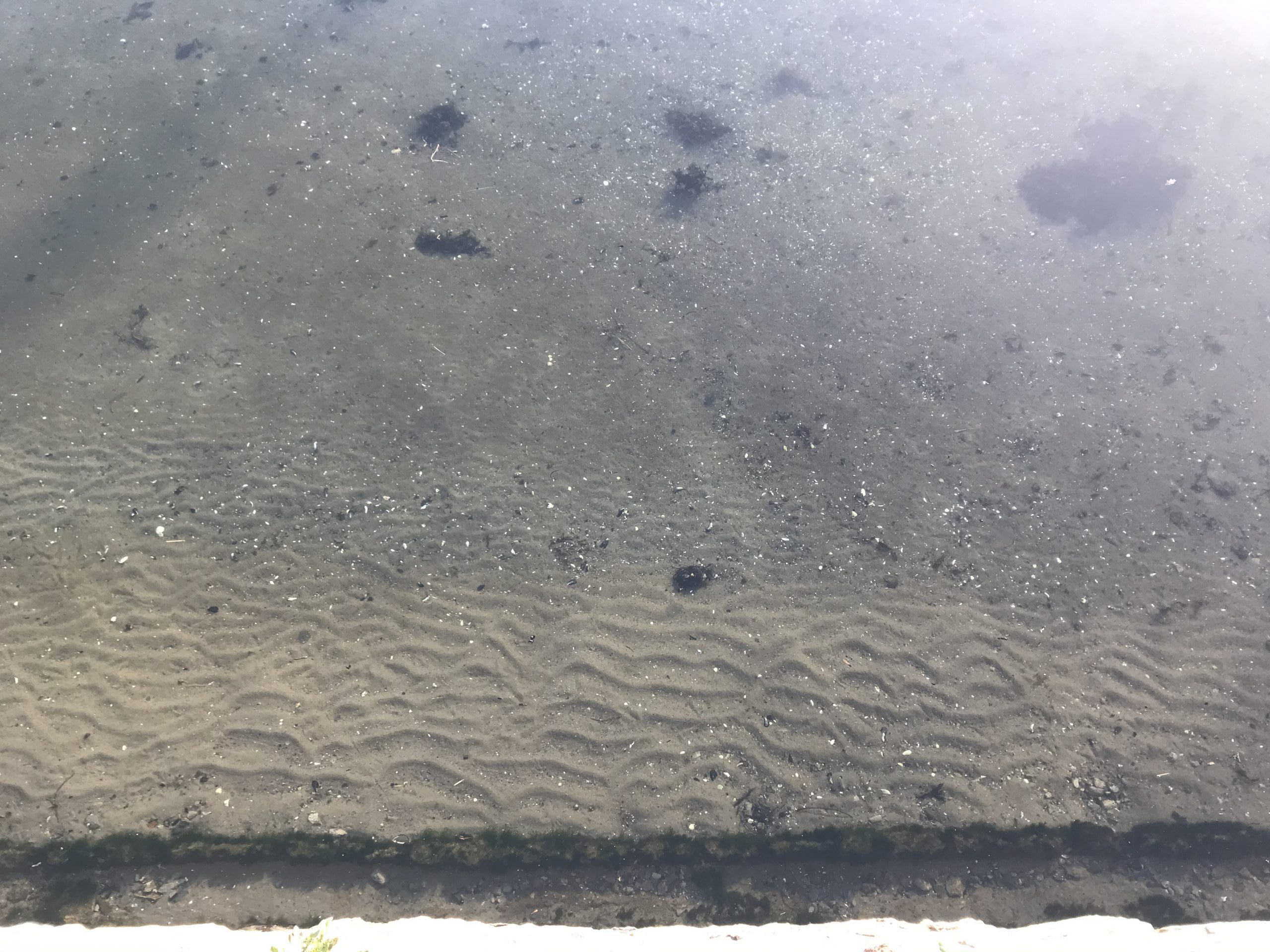 Below we see a similar thing again. I think the longer wavelengths closer to the sea wall are due to the shallower water depth there (hence more energy and higher velocities in the waves’ orbitals), then a slightly deeper part, then a corser-grained part and then mud covered in algae. 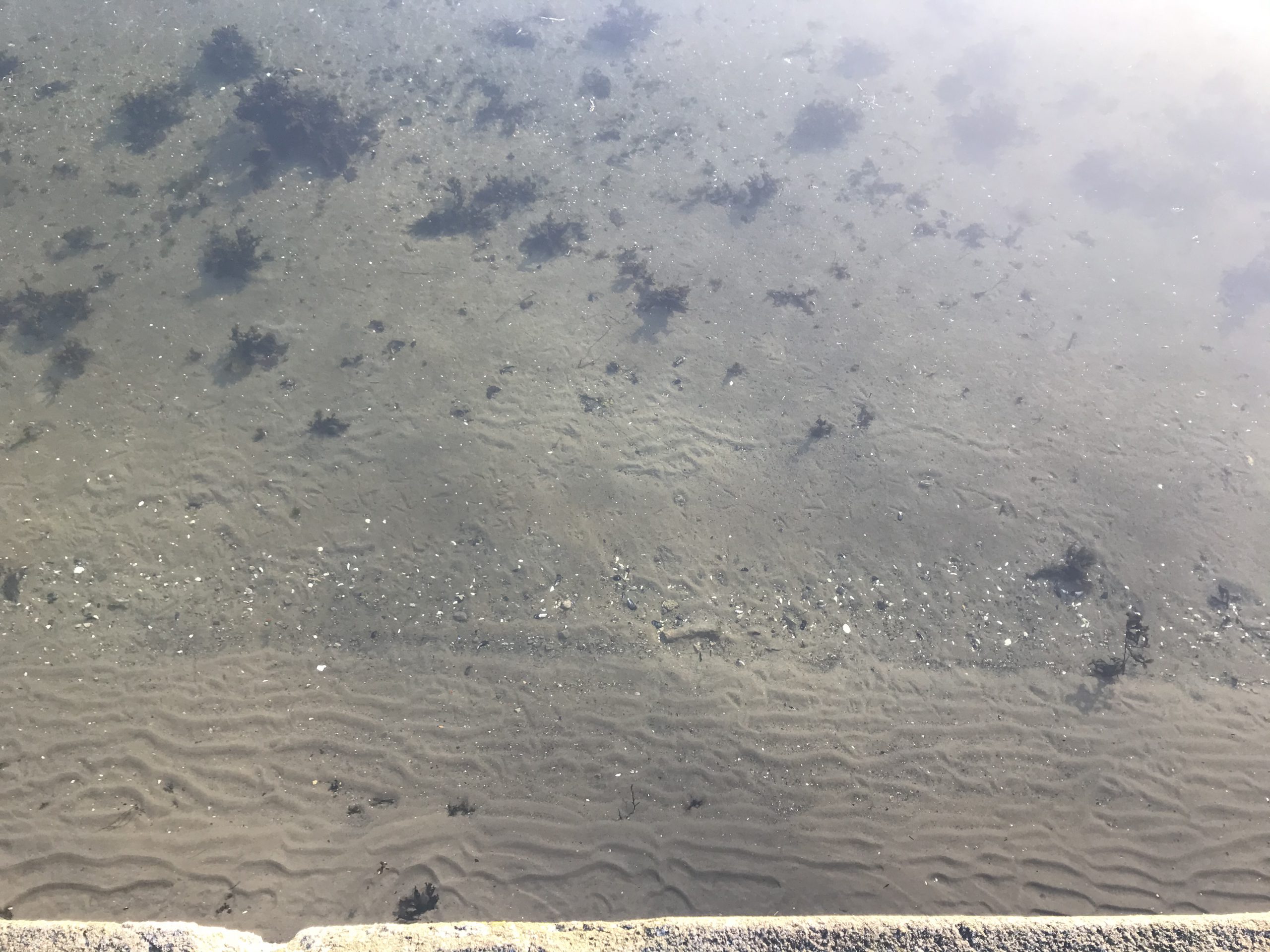 Here is another nice example of what I call “choppy ripples” — a lot choppier closer to the small and large stones at the sea wall than further offshore, and then a smooth bottom even further out. I haven’t quite figured out why the small stones there align perpendicularly to the sea wall. Any ideas, anyone? I’ve seen that so much on beaches, it must be quite obvious! 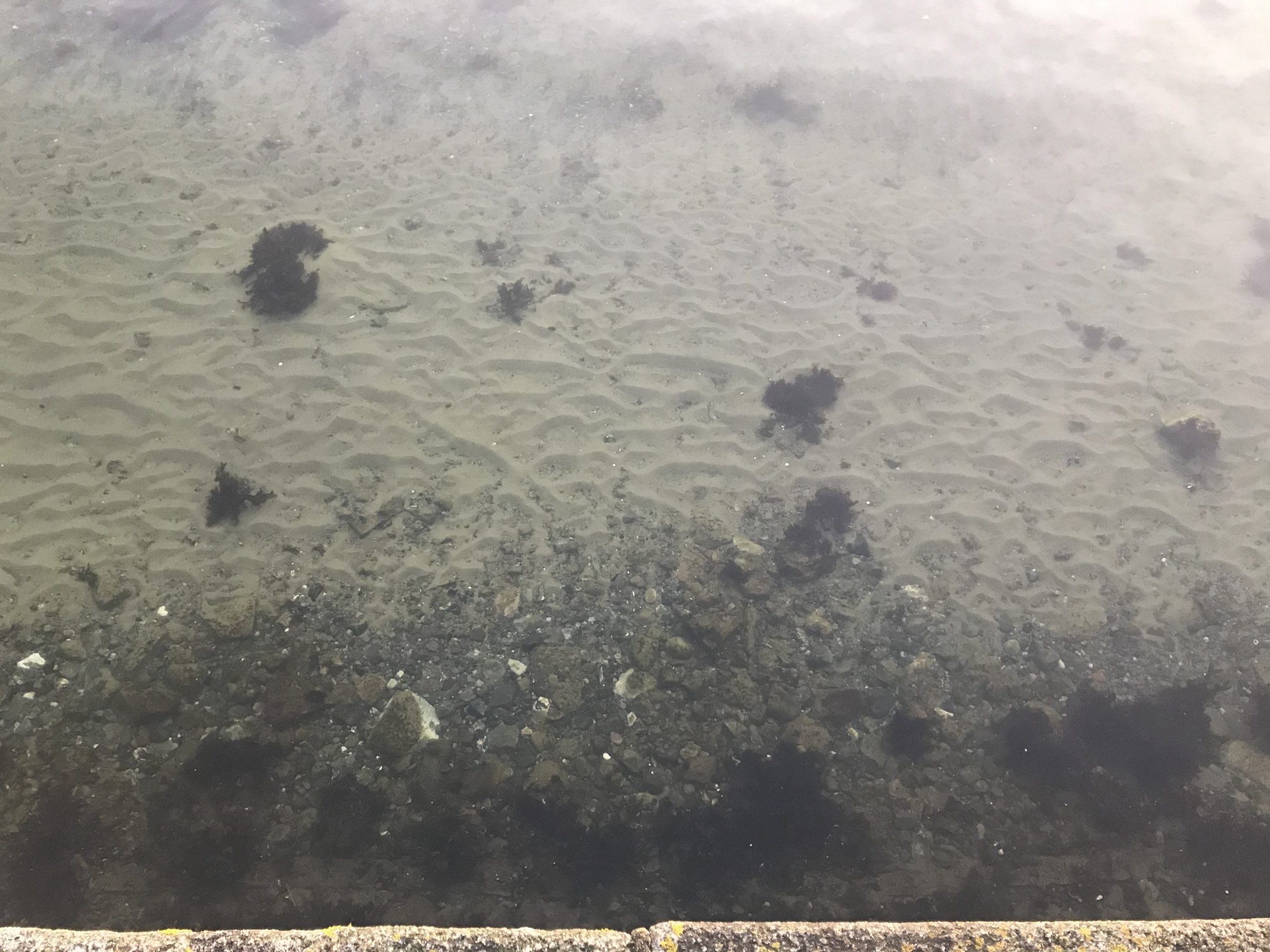 Oh, and here is a nice example of an obstacle influencing ripples. I like how they bend around the edge if that stone step! And also again very clearly different regimes related to different grain sizes and water depths. 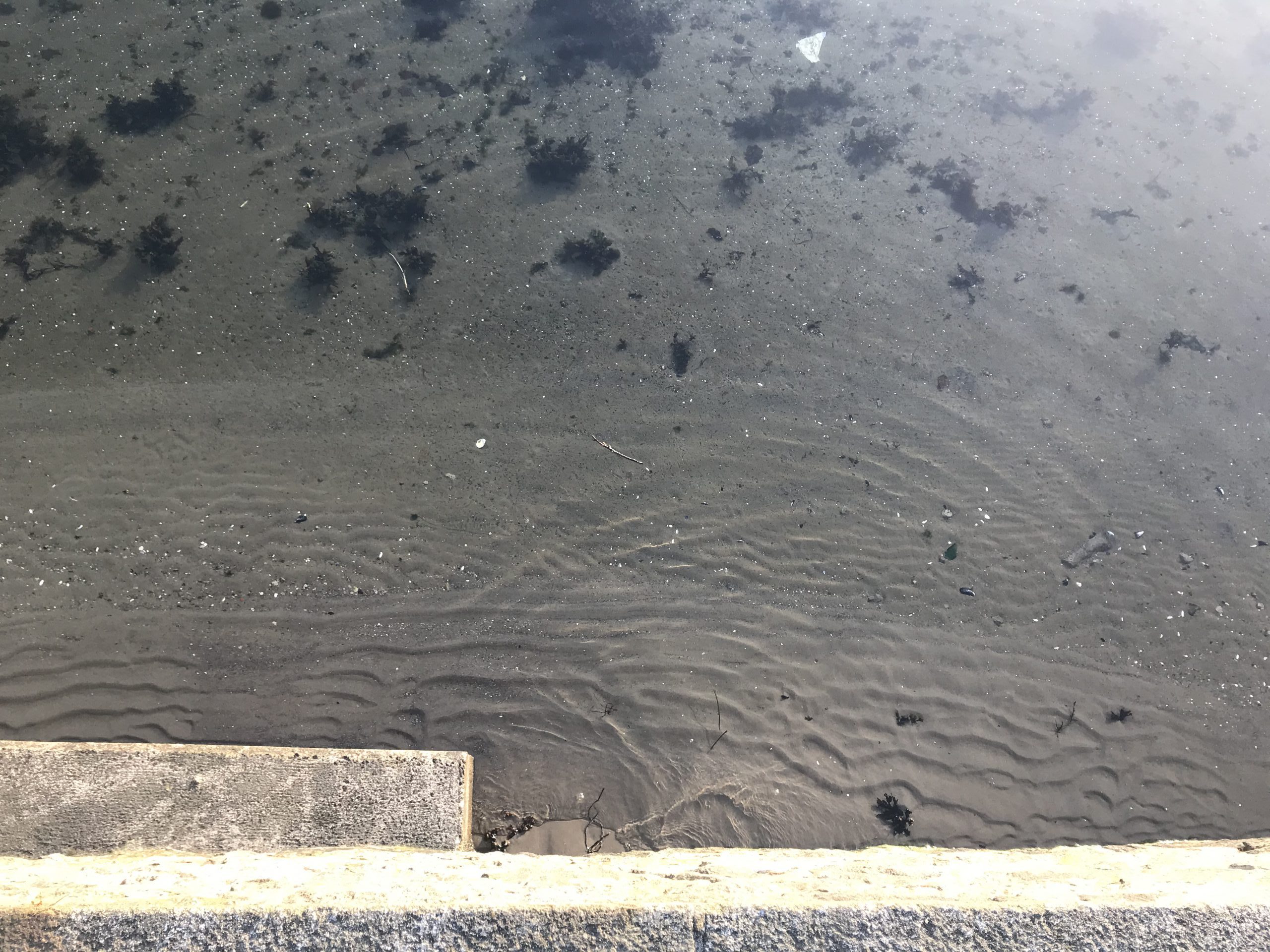 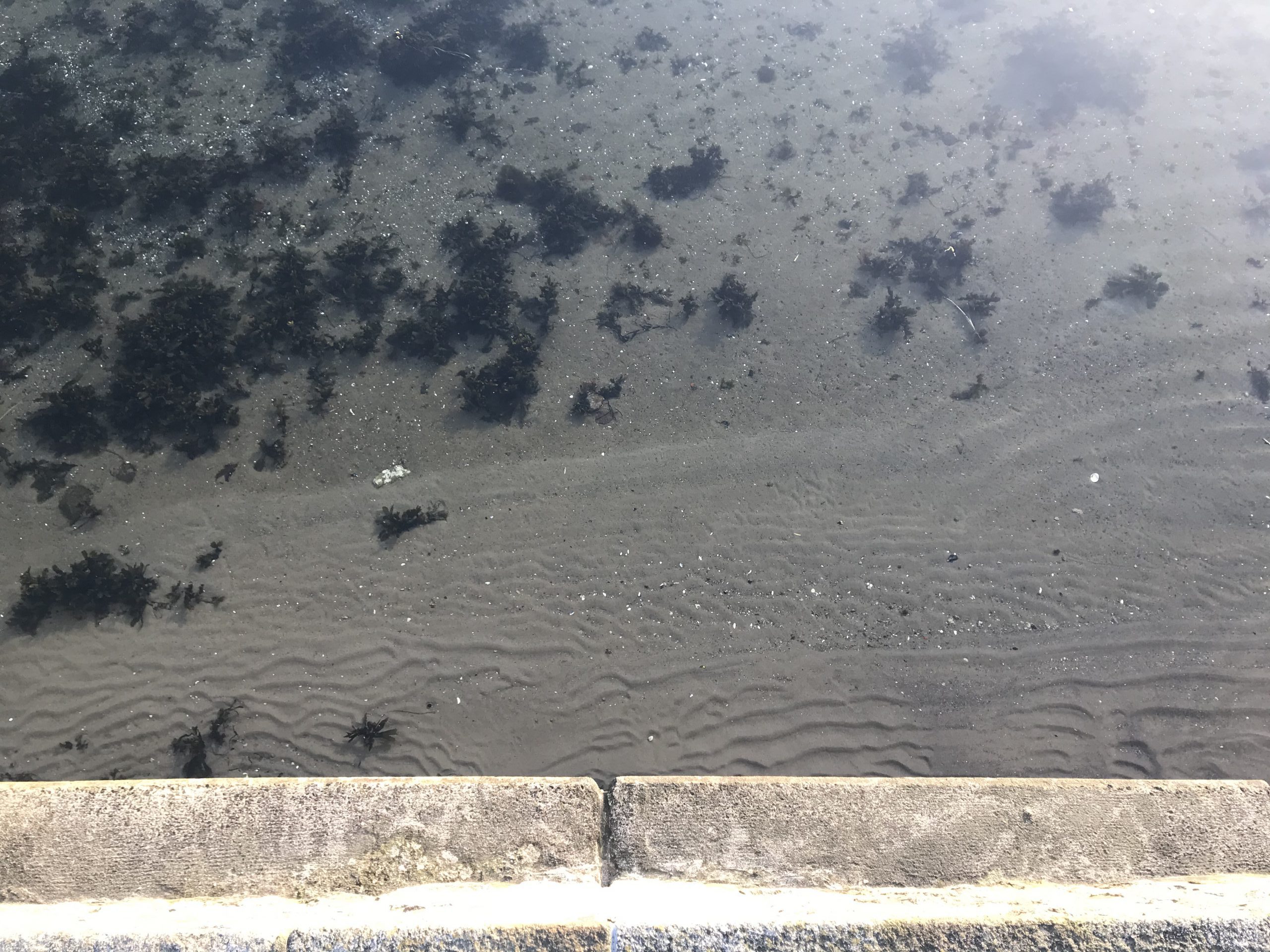 Here is another picture where algae mats seem to inhibit ripple formation. 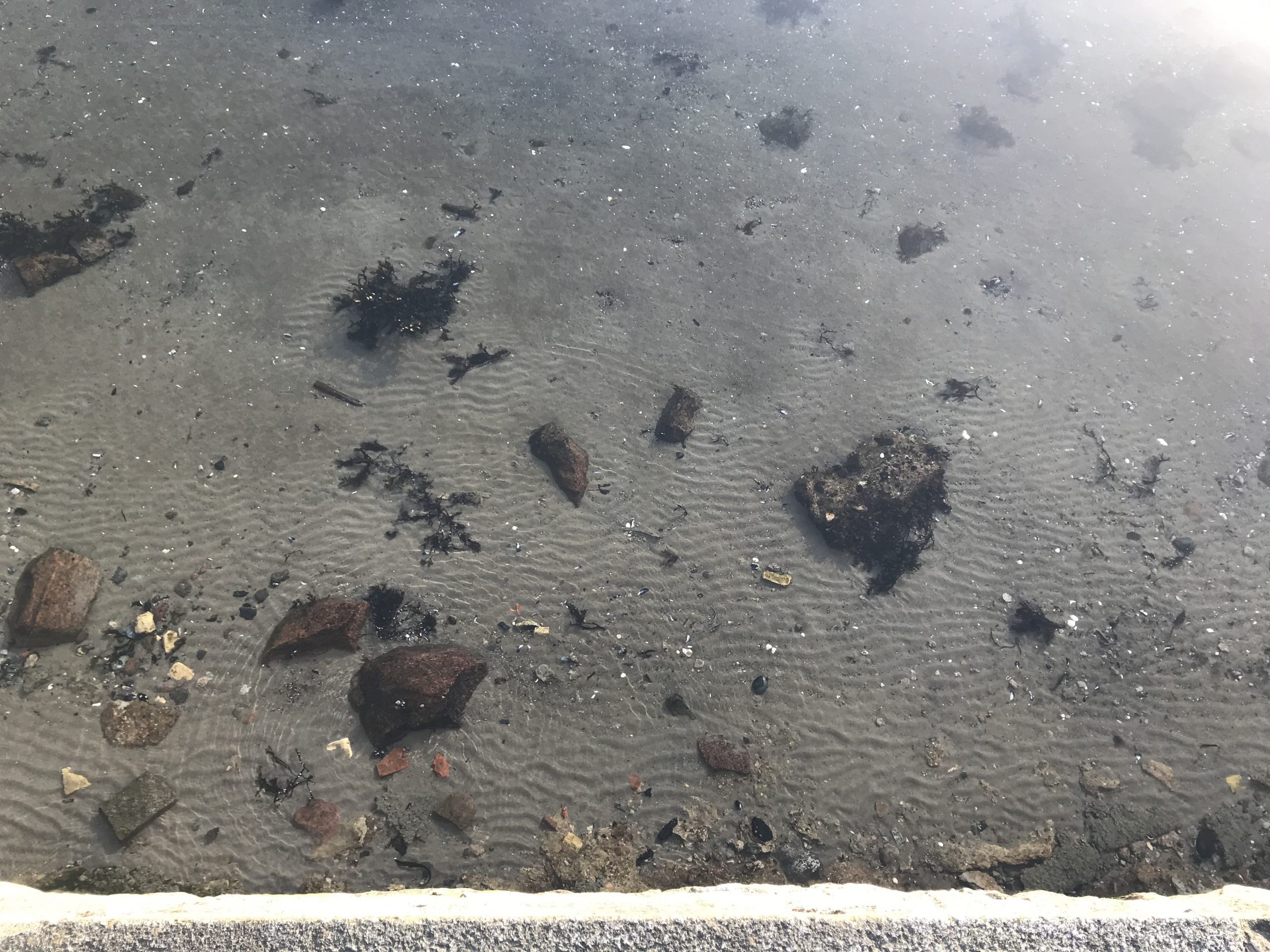 And here is an example of that phenomenon I talked about earlier that I haven’t really figured out: When there are no ripples, we often see debris in rows perpendicular to the sea wall. Why??? 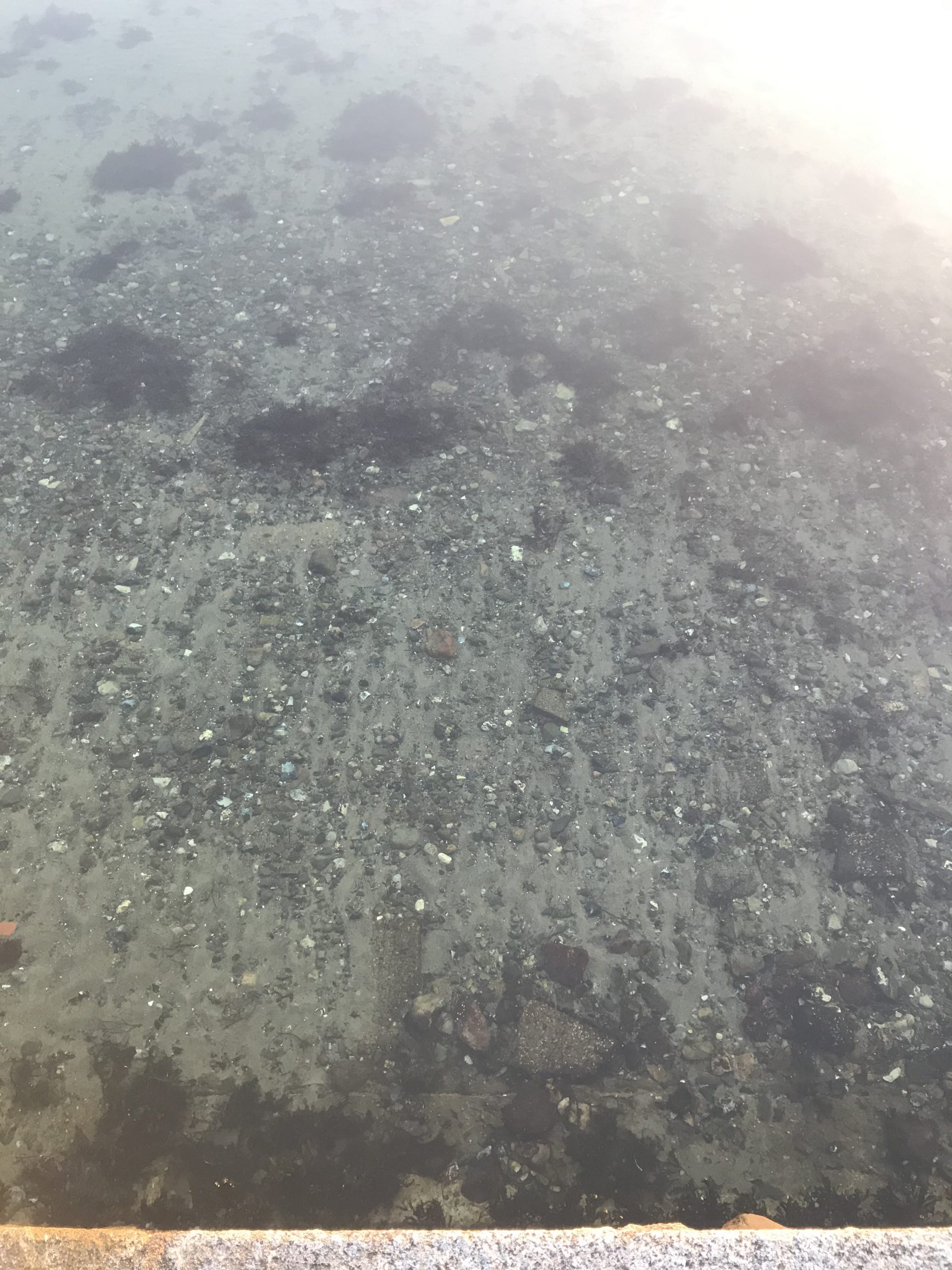 One thing I find very cool is when there are large, flat stones on the seafloor and they get partly covered in sand that forms ripples. I just think it looks super pretty! 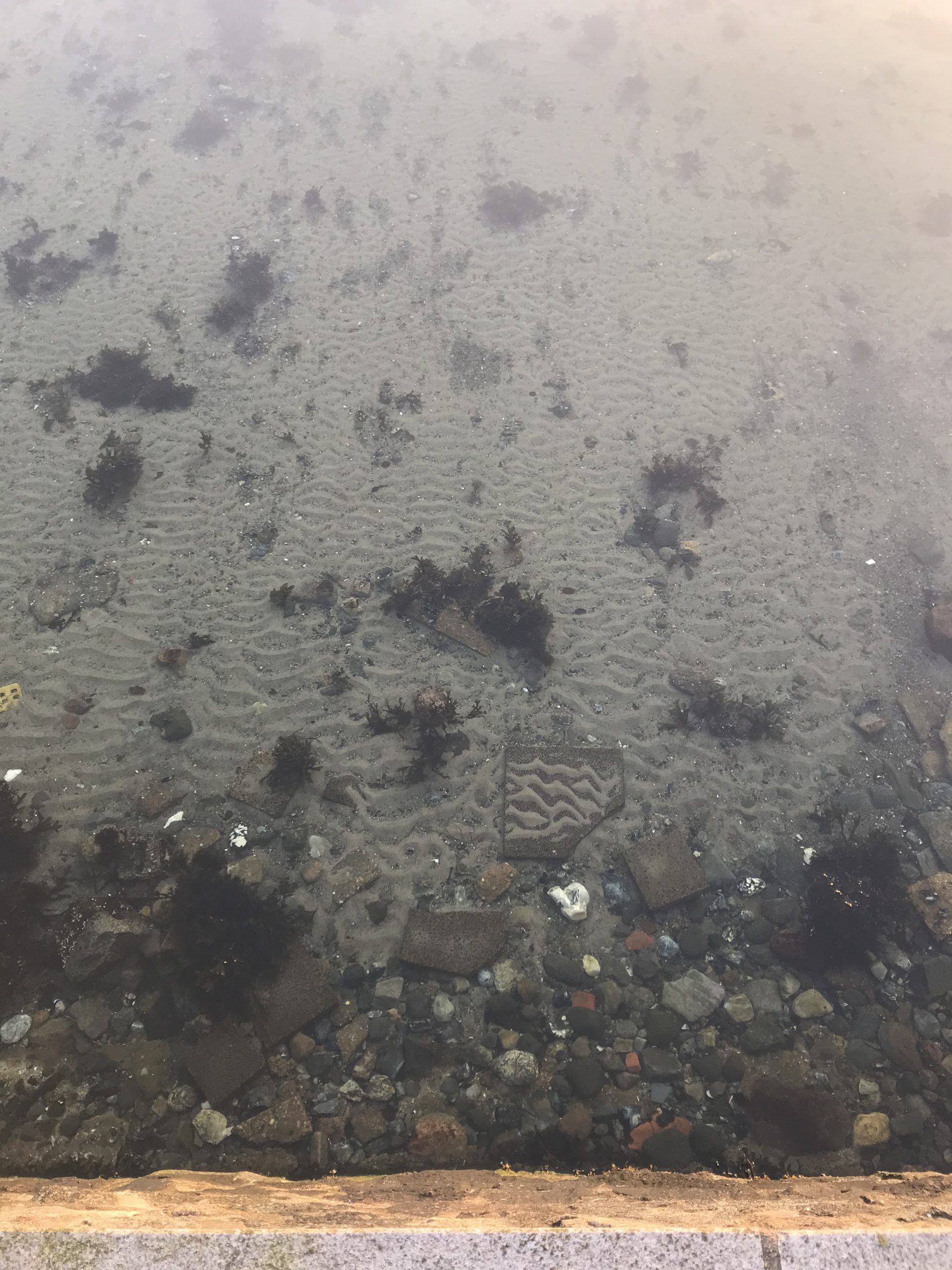 Another one of those:

And here some very choppy ripples! 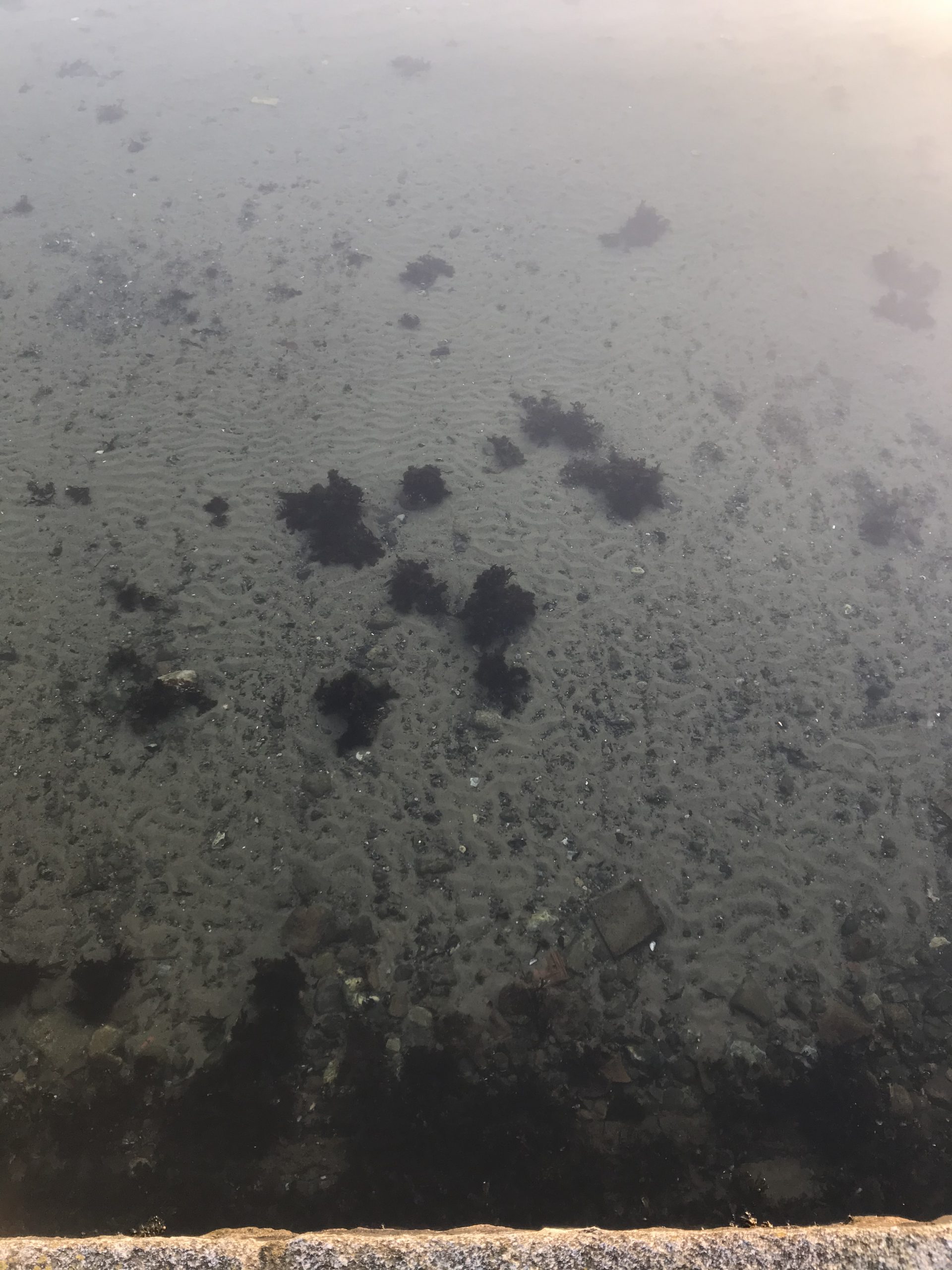 Here the ripples become more regular the further away from the seawall we look. 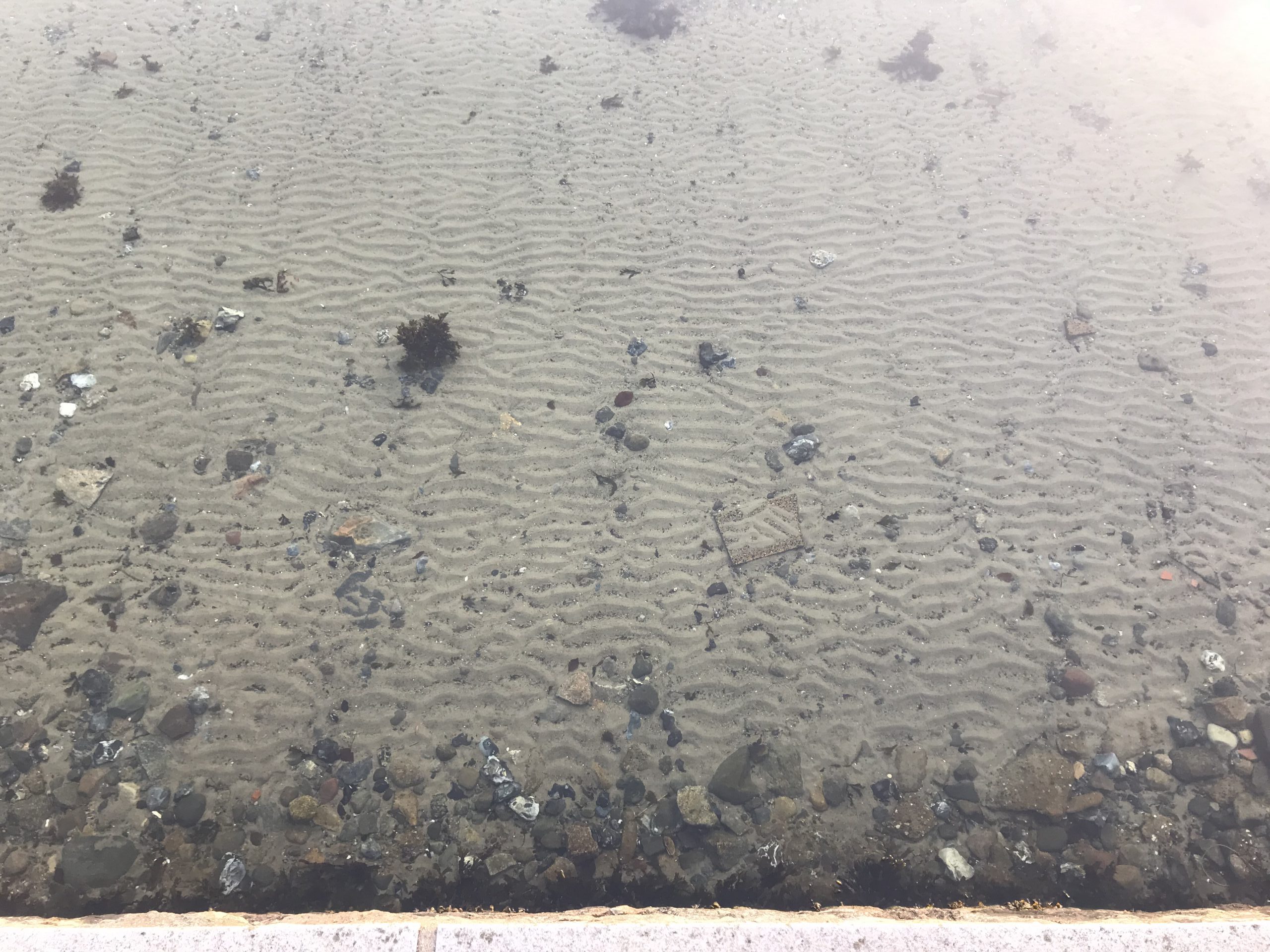 And now this one, if the light wasn’t so horrible, I would print and frame and put on my wall! 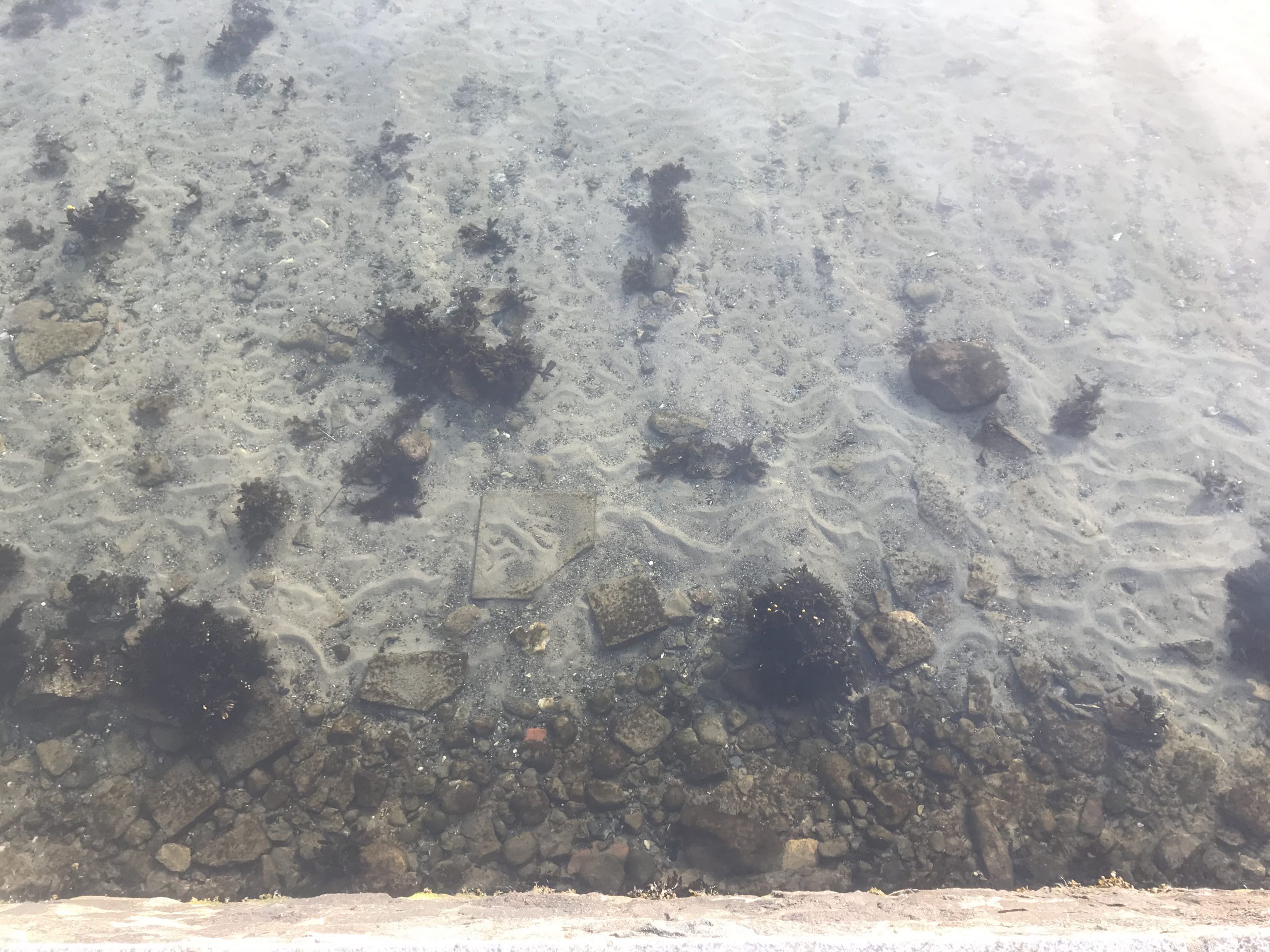 If you have made it all the way to the end of this post, tell me: Aren’t these ripples in the sand almost as fascinating as actual waves? And do you understand what’s going on there?

Related Posts to "Sand ripples. Why do they form in the exact way they do?":

4 thoughts on “Sand ripples. Why do they form in the exact way they do?”