My scicomm Instagram @fascinocean_kiel is back! As in it’s something that I am putting more thought into again. While it started off strong almost two years ago with daily posts written specifically for Instagram, I’ve been in a bit of a slump. For a while, I just posted pictures from current blog posts with a description like “read more about this on my blog”, but this didn’t feel satisfying. It also meant that I had a lot of #wavewatching posts on my blog, which I felt were taking over what I want the focus of this blog to be on. So the current compromise is that all the #wavewatching stuff happens over on Instagram (in German, but they have a really good translator at least to English), and only the most outstanding highlights will get their own post on here. But there will be a summary post of what went on on Instagram every month or so. Or at least that’s the plan for now!

I started out posting on Instagram again at the end of my month-long trip to Bergen, Oslo, and finally Gothenburg, when I got the exciting opportunity to “meet” Anna Wåhlin’s AUV, Ran, and take part in a short cruise on RV Skargerak to see her in action.

Btw, the reason I am posting more selfies now is that I’ve been thinking about the research around #ScientistsWhoSelfie that shows that showing selfies is beneficial for being perceived as warmer, more trustworthy and also as reducing gender-related stereotypes about who can be a scientist (at least if you are a woman posting selfies). And I think that it’s a very easy contribution to make if it helps achieve scientists in general being perceived as more trustworthy and also helping people to see that scientists are not always old, white men with beards and messy hair in lab coats. Sometimes it’s also me, sitting in the rain, grinning because I get to see a cool AUV up close! :-) 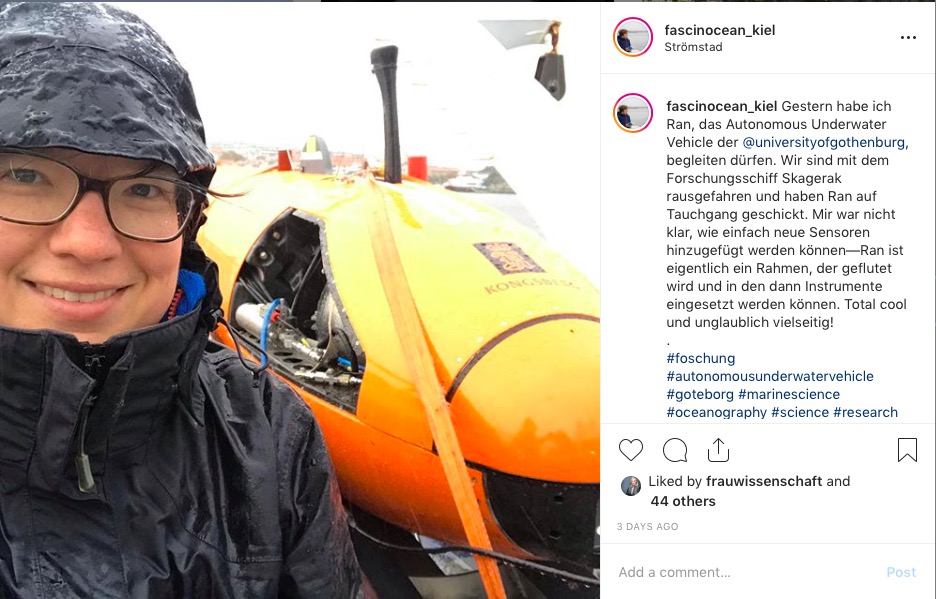 On that cruise, there was of course also CTD work going on. 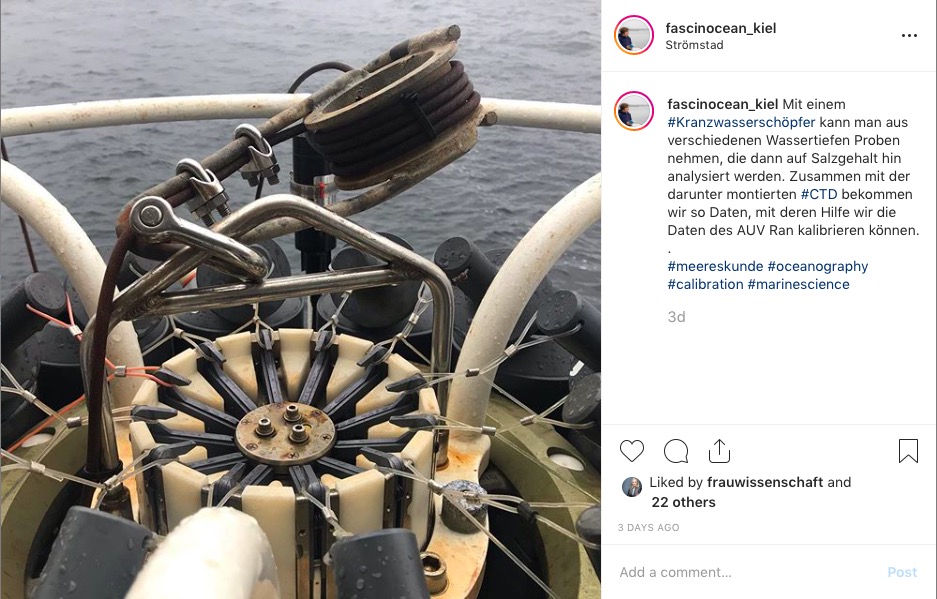 And work doesn’t stop just because it gets dark… 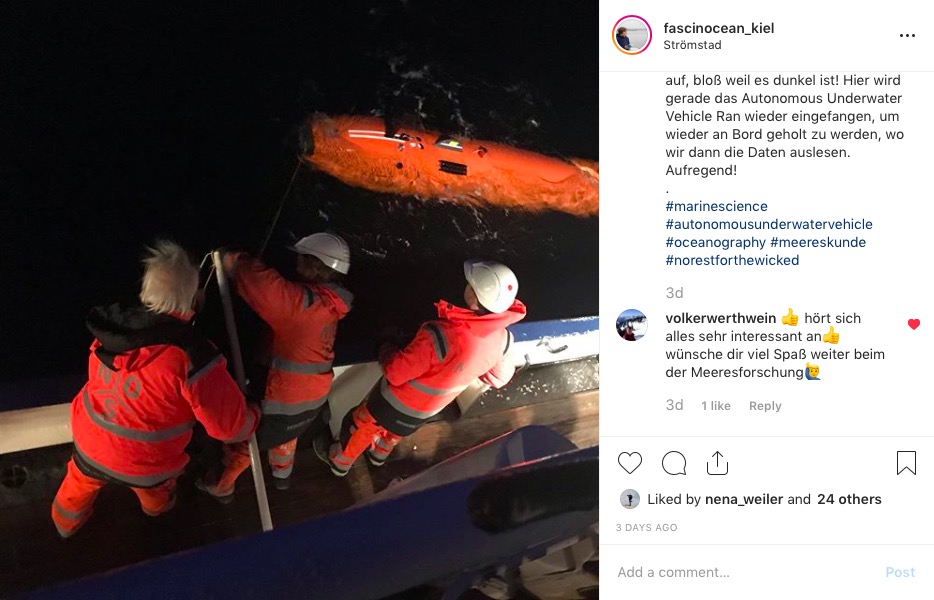 Then this is the library in Gothenburg — a beautiful building that I passed several times on the way to the institute, and always admired. 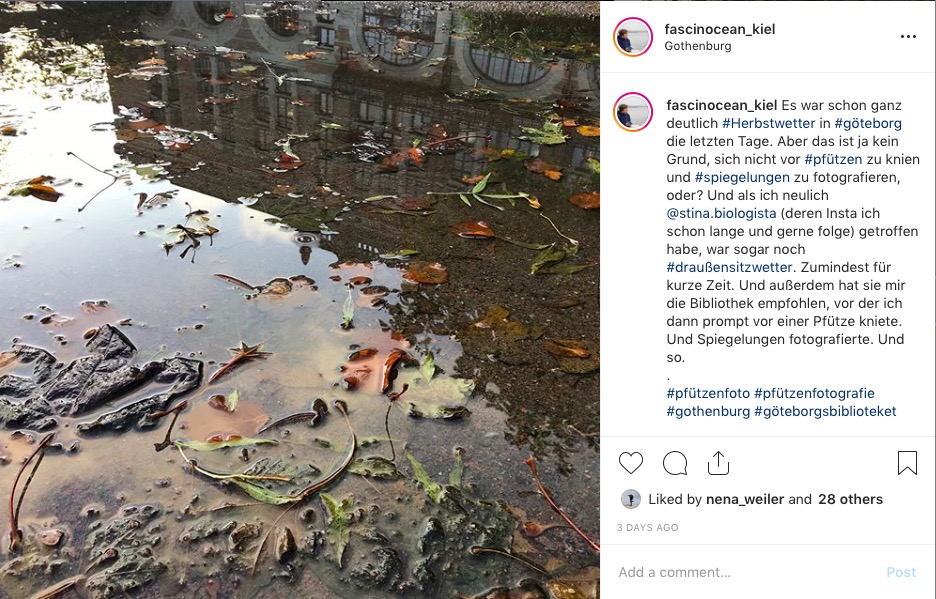 And then I was on the ferry to go back home! In a cabin with sea view! That made me so happy. I was so tired after that exciting month, so sitting in my bed instead of standing on the cold, wet and windy deck felt like heaven :-) 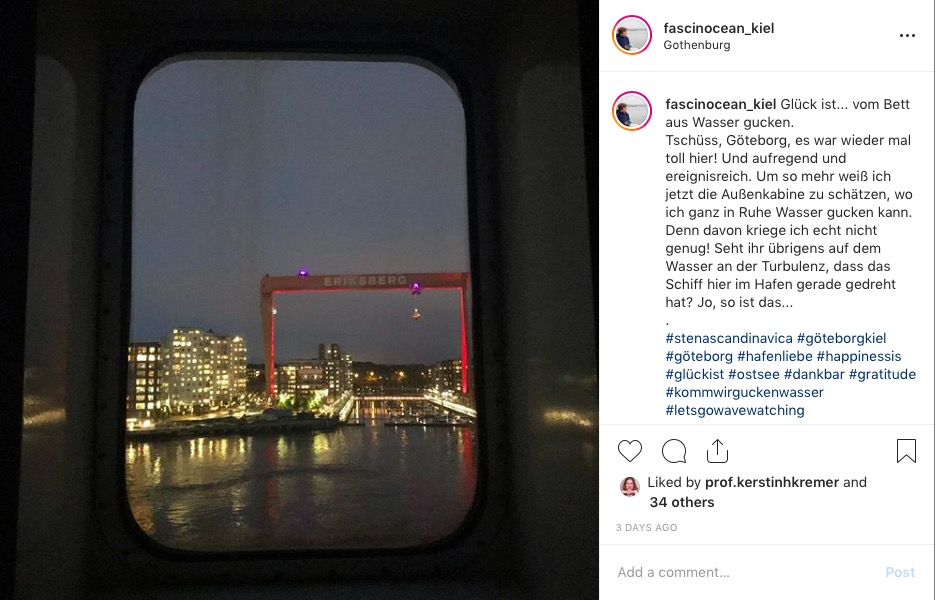 And then we were home! Or at least almost. The Kiel lighthouse is situated offshore in Kiel bight, and it’s where the pilot station is (you see the pilot ship returning to the lighthouse in the picture below)

And this is the ferry arriving in Kiel port. I always love watching how these big ships are carefully maneuvered into port! 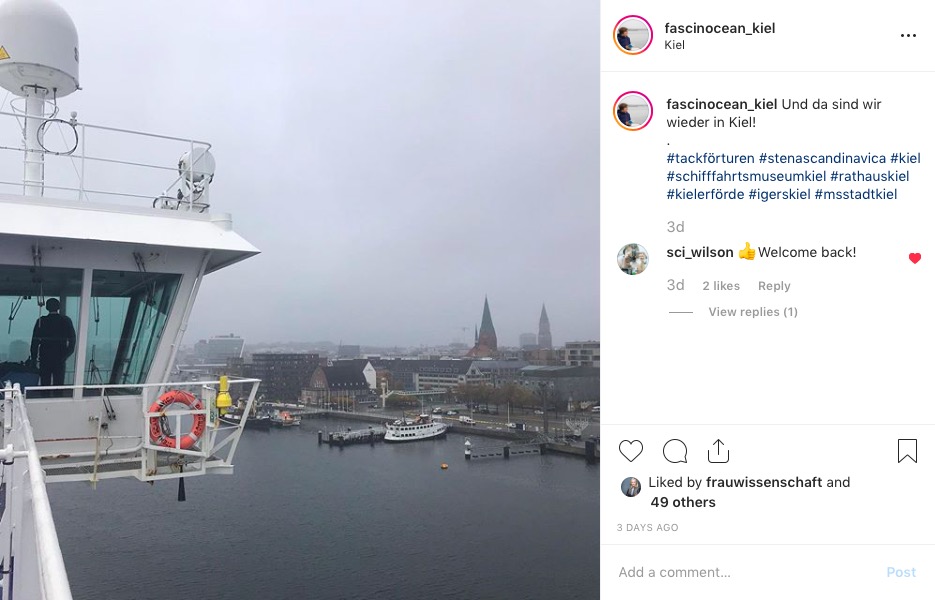 And this is another lighthouse on our way into Kiel port, and the ferry’s wake.

And then we had a little throwback, reminiscing of Pierre & my adventures on Straume Bru. 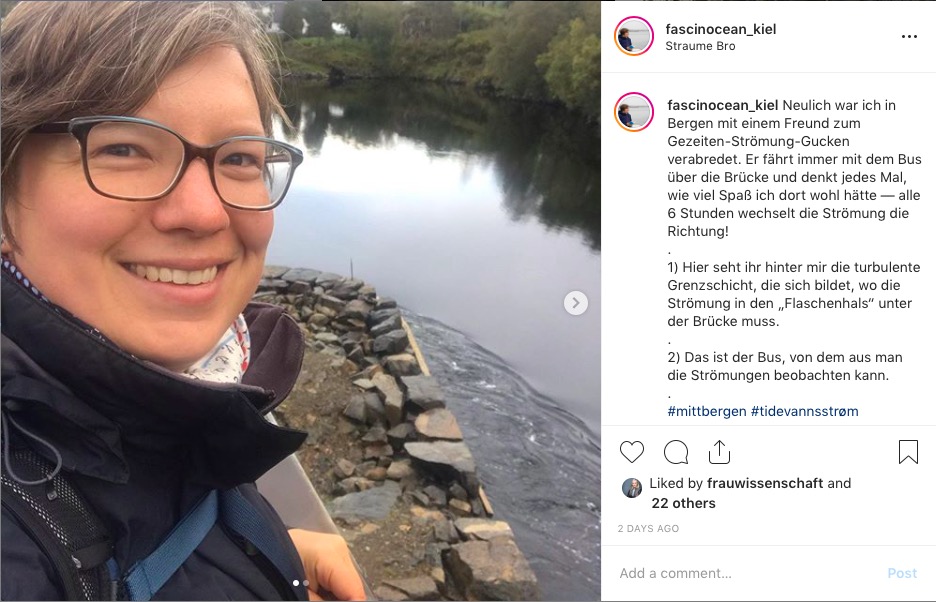 And then we are back to wave watching in Kiel! Reflections on the sea wall, and total reflection.

And what was going on here with all that foam? And is foam actually a passive tracer, or is the distribution also influenced by surface tension or other stuff?

Here is where the foam ends up in Kiel fjord. And what I find fascinating is how towards the upper edge of the picture, the ring waves of the water draining into Kiel fjord are really visible, whereas in the lower edge the picture seems dominated by wind waves. Even though both types of waves are probably fairly equally present in all parts of the picture, just the different angle makes one or the other appear more prominently.

It’s really fun to bring this collection of screenshots of my Instagram together. I’m a little impressed by how many wave pictures I post!

Here we are looking at a ship’s wake that is reaching the beach. 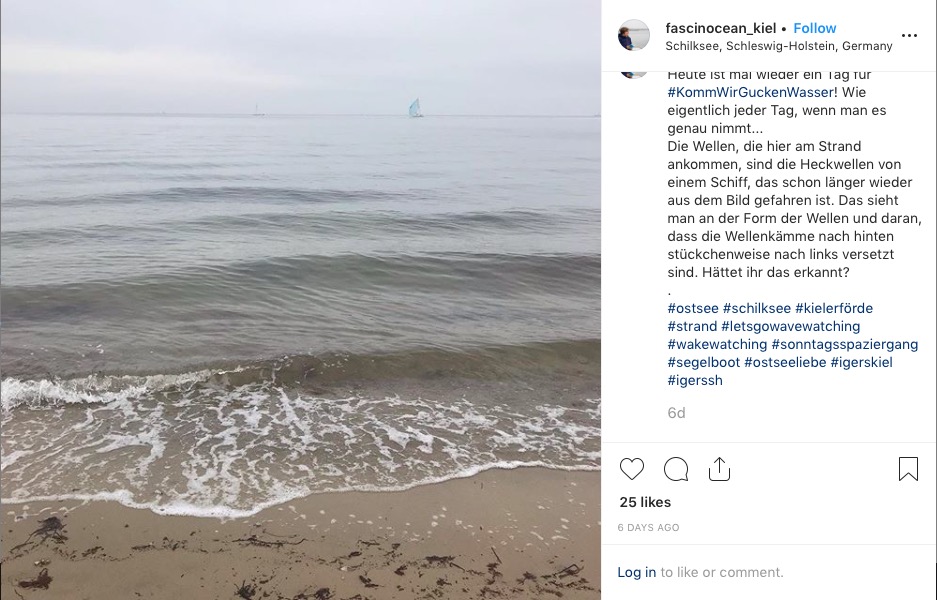 And I just love the sound of waves on a stony beach!

Not every day is wave watching day, sometimes we just have to be content with water. 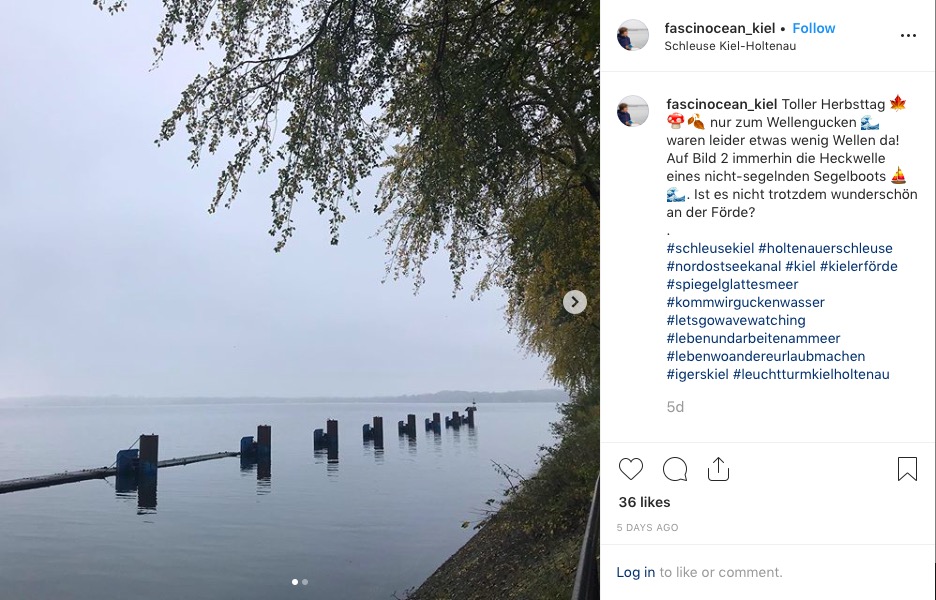 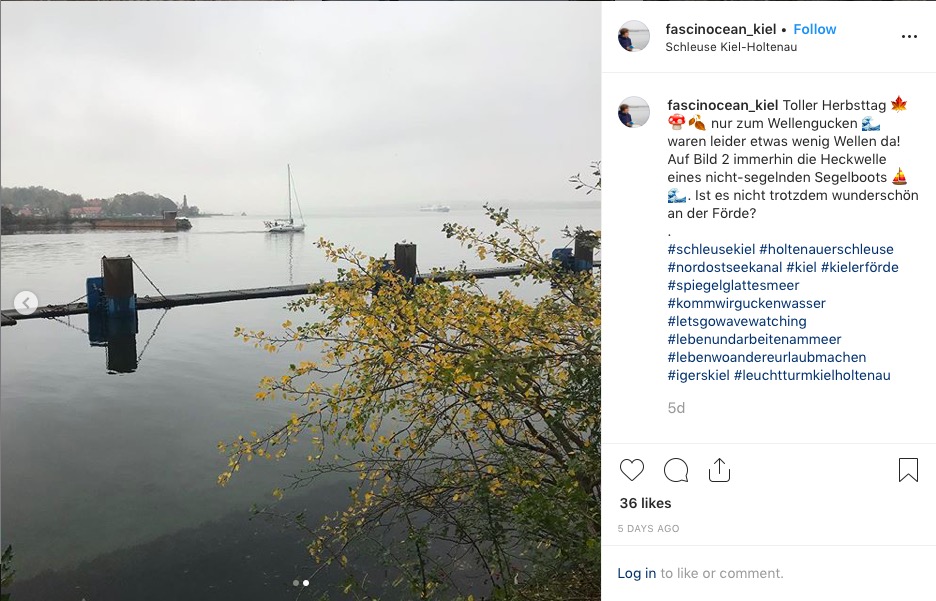 But then there is of course always the opportunity to make the waves you want to see (and be the change you want to see ;-)). Here we are looking at hydraulic jumps in the sink at work. 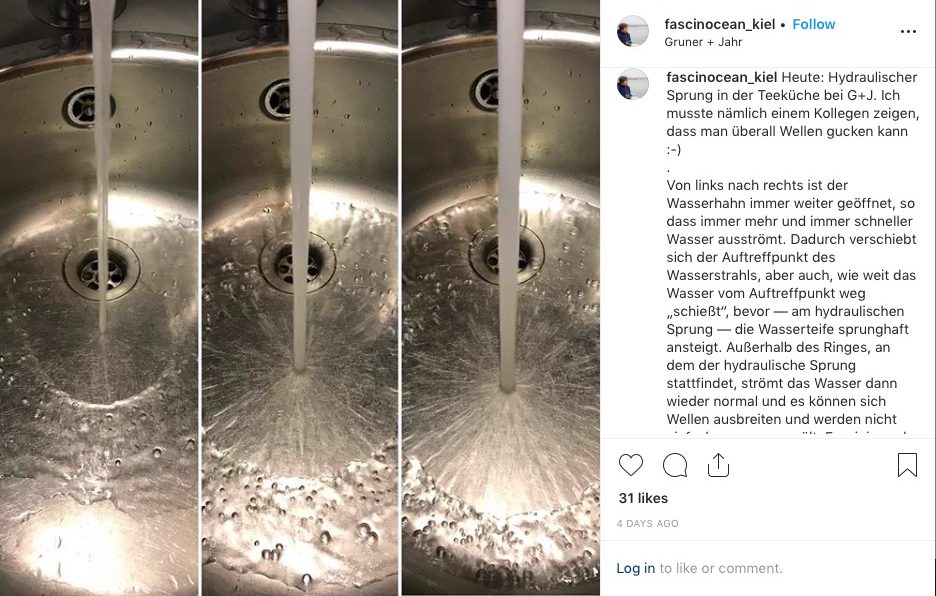 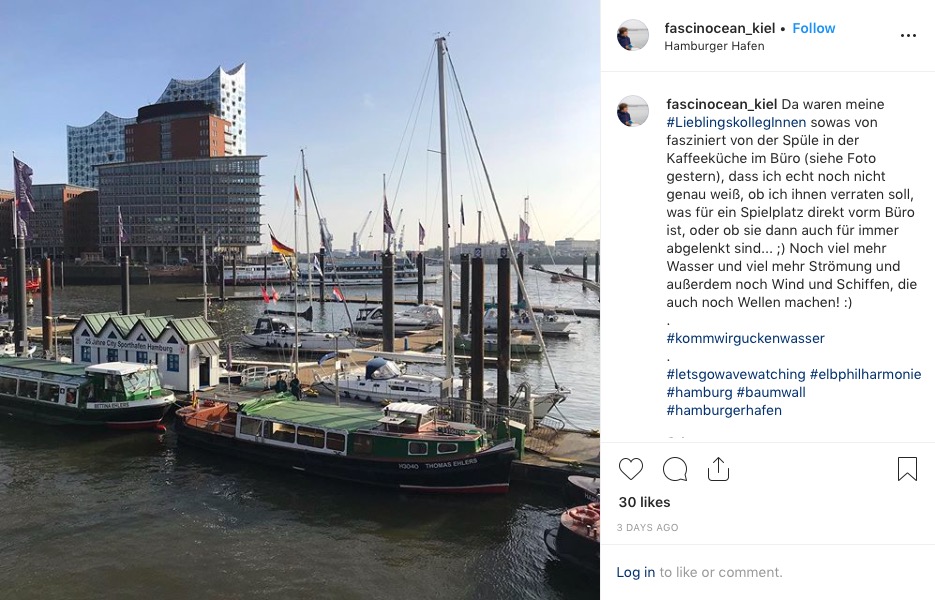 But now a wave riddle. What’s happening between this pic… 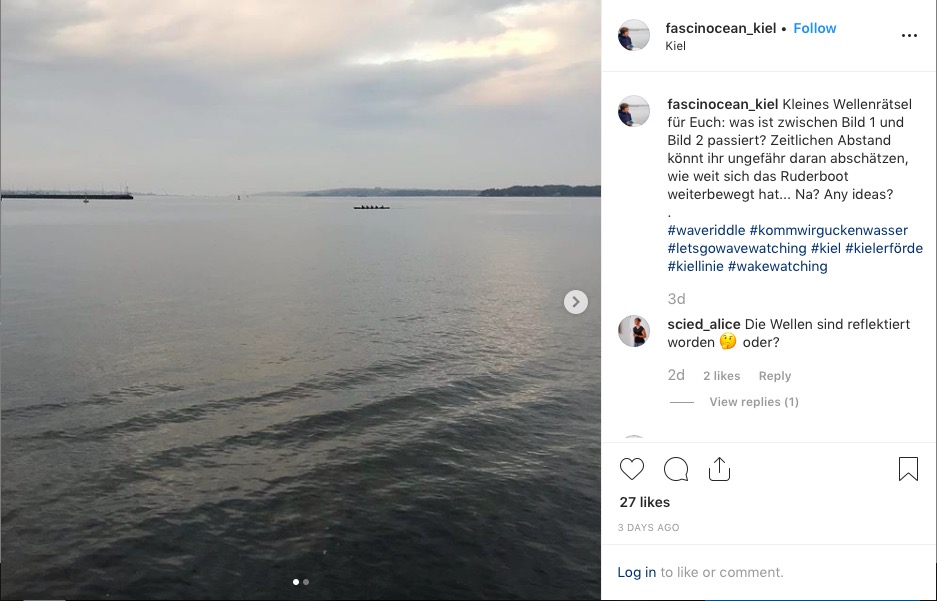 …and this one? Any ideas, anyone? 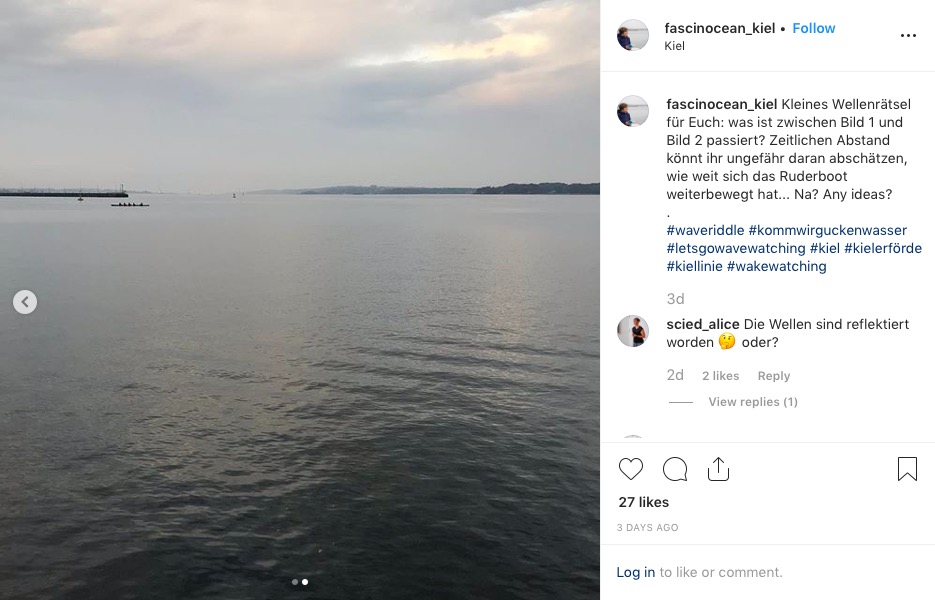 And then there was the day where I went to play with four rotating tanks simultaneously in the morning, and then later to a conference on “Screening the Sea”, audiovisual media and the sea. That was one exhausting day!

The next day, walking down to Kiel fjord, I was in a bit of a gloomy mood and thought that there might not possibly anything going on that I hadn’t taken a million pictures of already. And luckily I was so wrong! My faith in daily wave watching was completely restored when I saw the sediment clouds and how they behaved in comparison to surface waves.

And then there was the day with very low water, where we could really nicely see how the shape of the ground influences the waves. 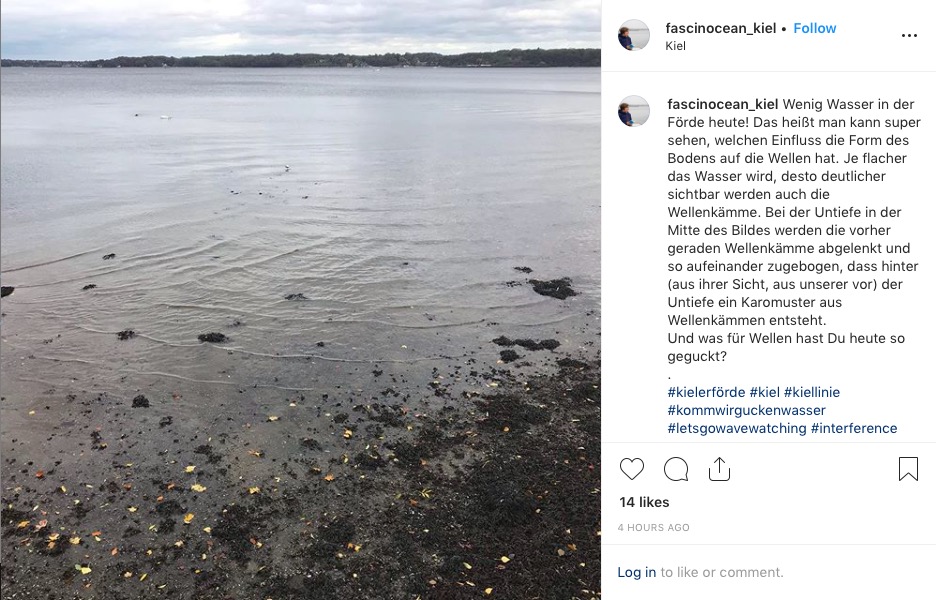 Shallow water waves always look a bit ridiculous, don’t they? Like sausages moving onto the beach. 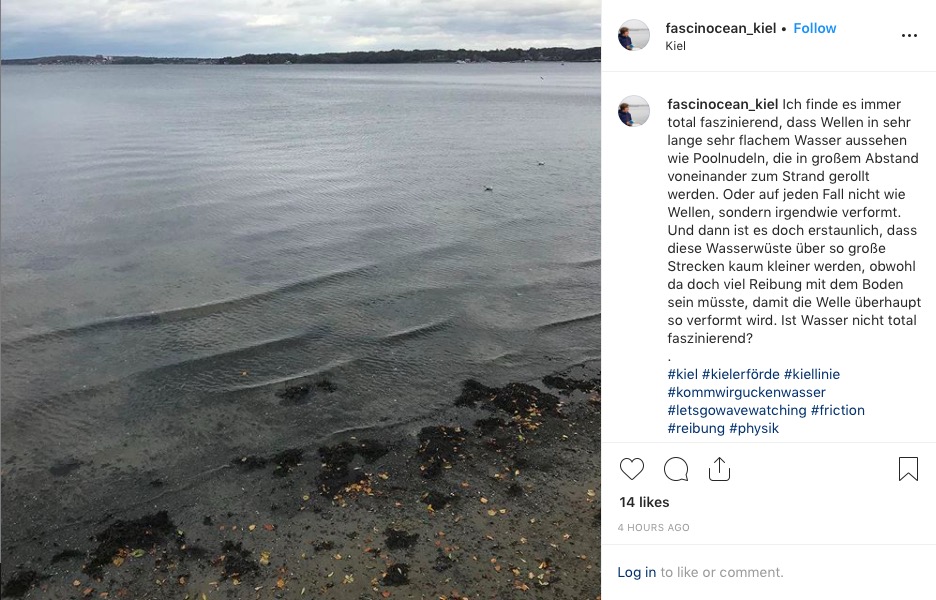 And then I finally combined a lot of selfie movie clips about meeting Ran, the Autonomous Underwater Vehicle, into a 5-min-movie and advertised that on my Insta, too. 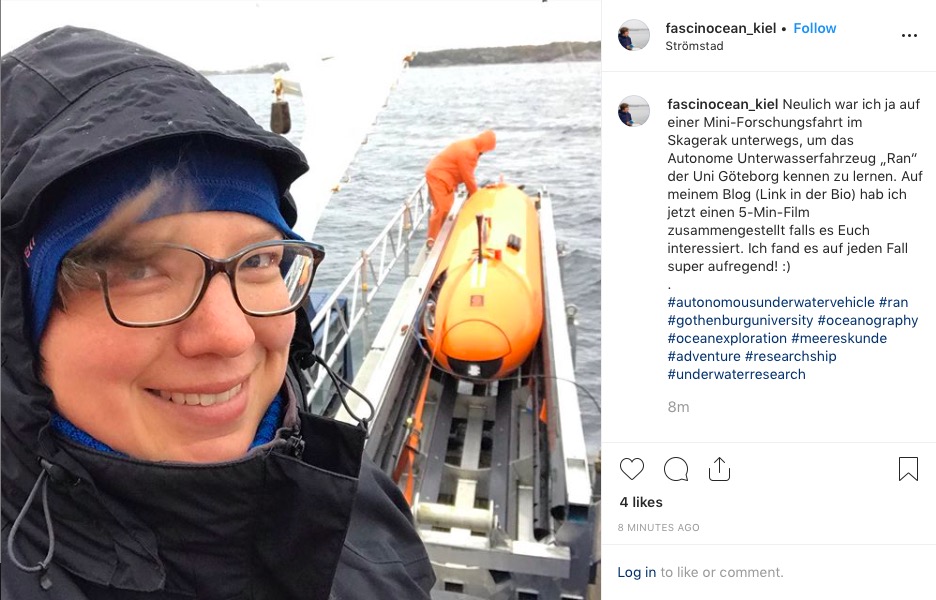 When I went to go vote, I happened to wave watch in a spot that I don’t usually go to. Also fun! And nice to see how this floating bridge is sheltering parts of the lake from the wind. Although some waves come through, as you see in the deformation of the reflections of the hand rails.

And then I went to Hanover to give a workshop at their university. But first, I had to go do a picknick with Frauke :-) And, of course, a wave riddle. Can you guess who or what made the waves in the picture below? 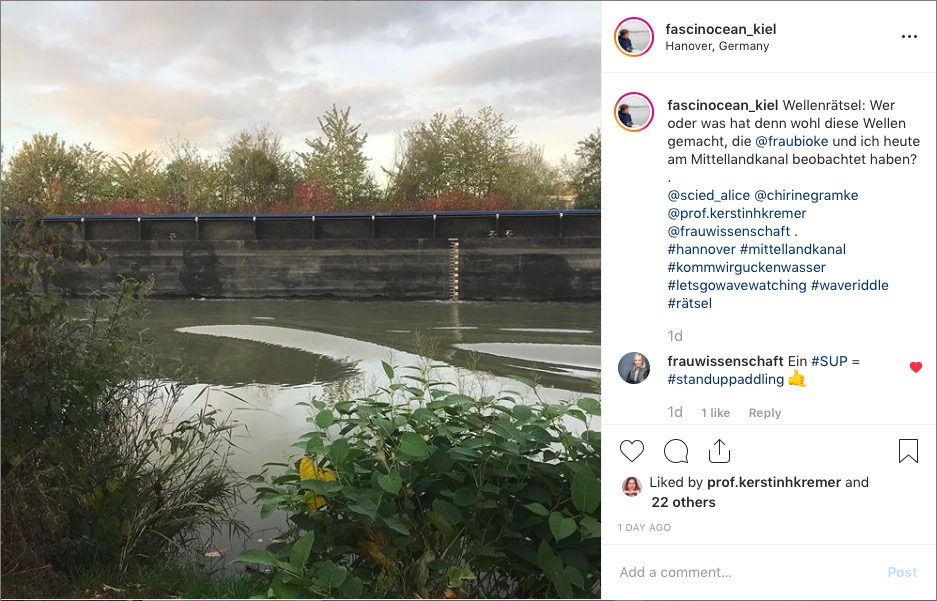 Frauke is the best. She brought soap bubbles to our picknick! And there is so much physics in soap bubbles. From the films that change color as the bubble ages, to the shapes they form, to how their size is related to how hard you blow when making them. So cool! 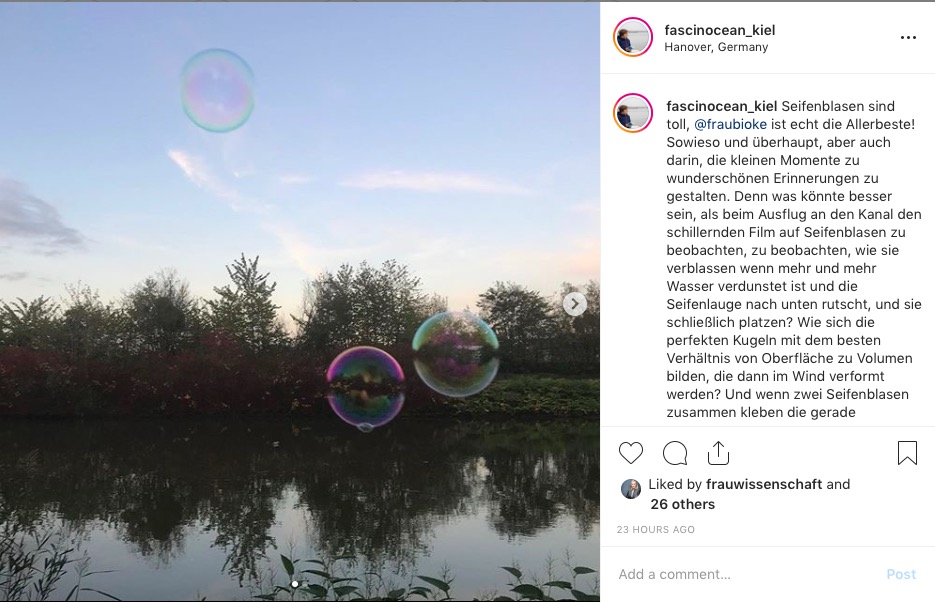 Also super interesting to watch how the soap is sliding down the soap bubble, leading to a discoloration starting at the top, sliding down, until it finally bursts when enough water has evaporated. 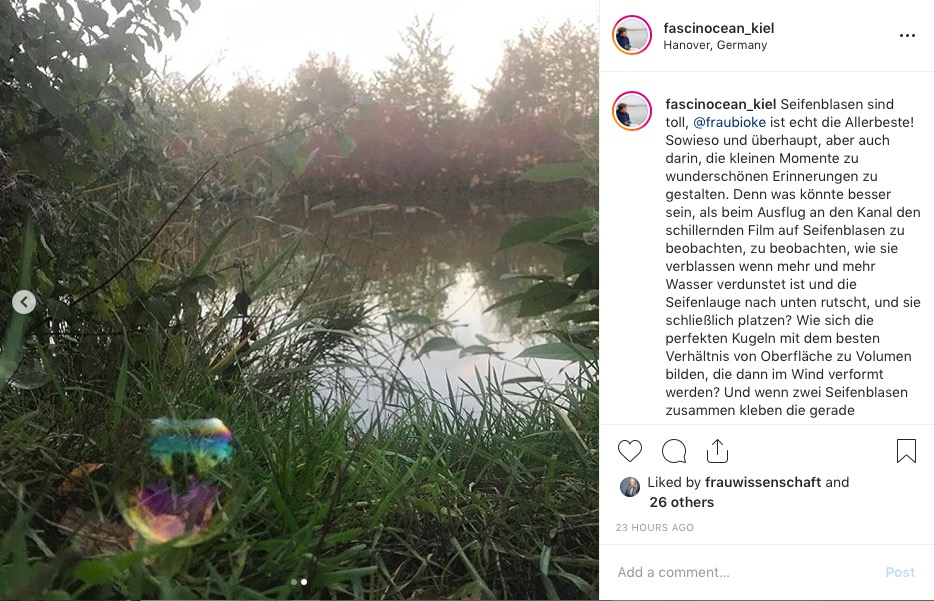 And now for some drop photography! Water is dripping down from somewhere fairly high up, so the crown of droplets that is thrown up into the air by the surface bouncing back after each drop is quite large! As I was watching, someone moved a window in the office building right there, so that the sun’s reflection lit up the point of impact perfectly.

Then a morning walk with my sister in Hamburg. There was some fog in the shadow-y bits of the river but it’s really hard to spot… 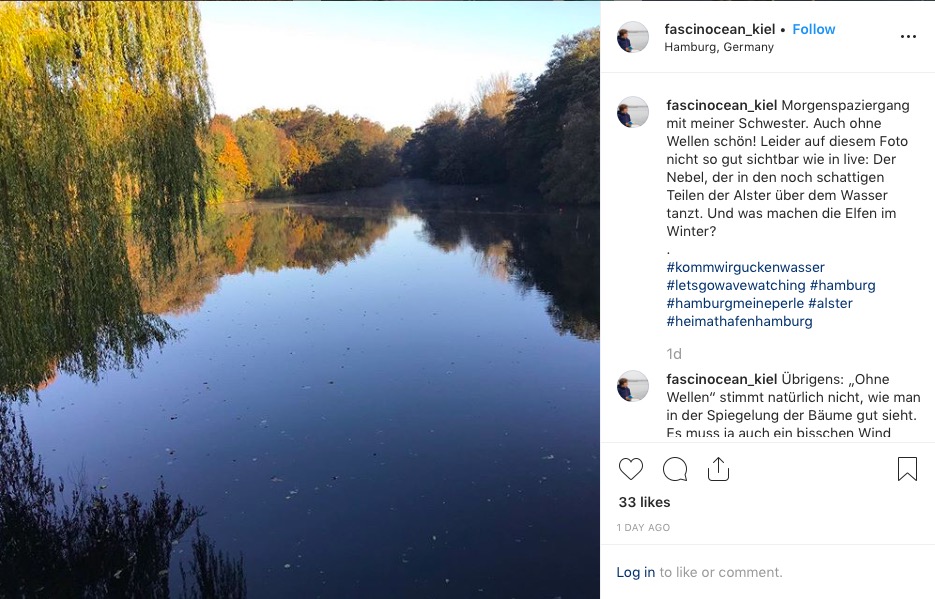 And then back home in Kiel! Perfect wave watching, right?

Later that same day my favourite spot at the Holtenau locks. 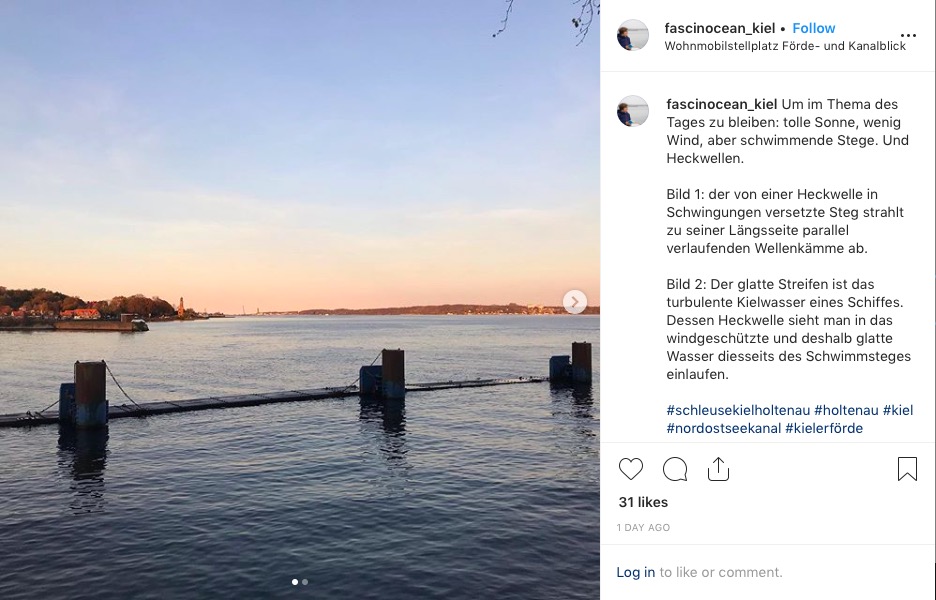 I just always love it there! 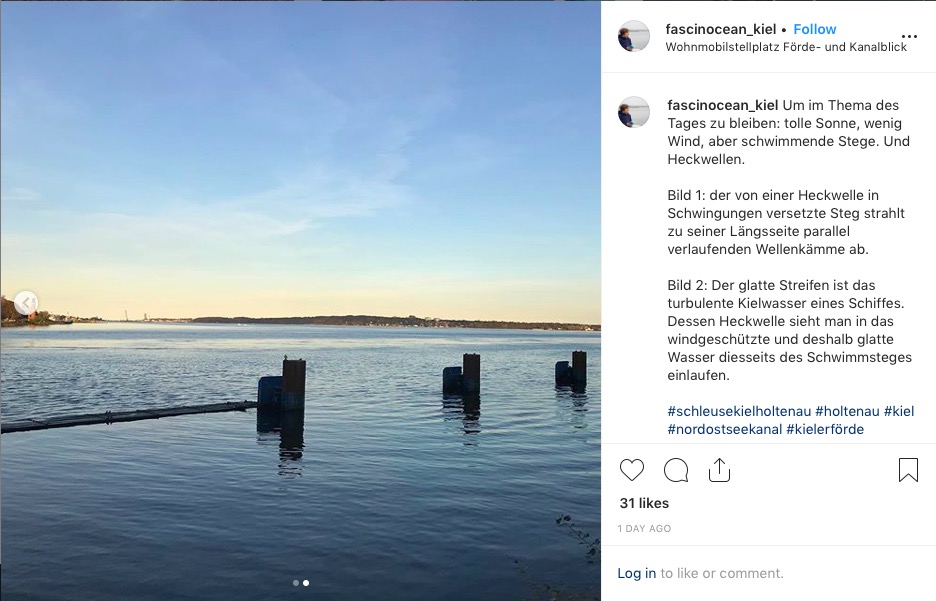 And then: A day full of jellyfish watching! They are SO beautiful! (For more jellyfish pics, see this blog post) 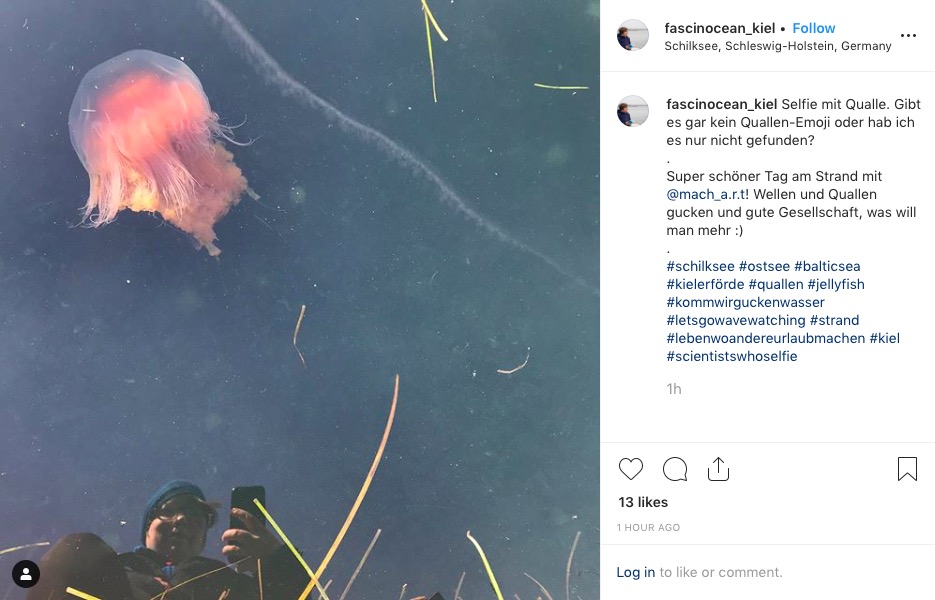 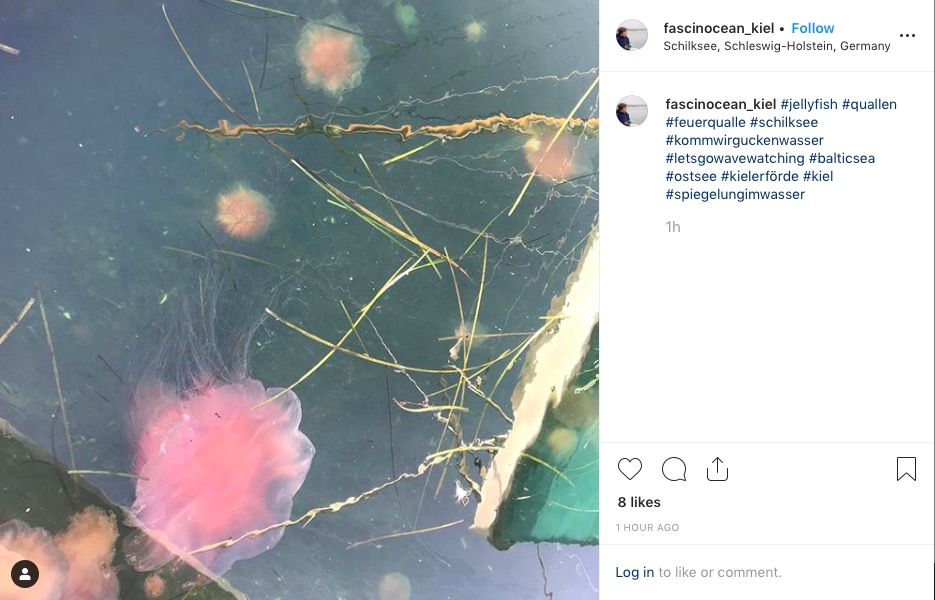 And one last selfie with jellyfish.

So this is where we are at with my Instagram @fascinocean_kiel now: 444 posts! And the last three all featuring jellyfish :-D

And I am thinking about switching it back to English again. So much for knowing my goals with this profile… :-D 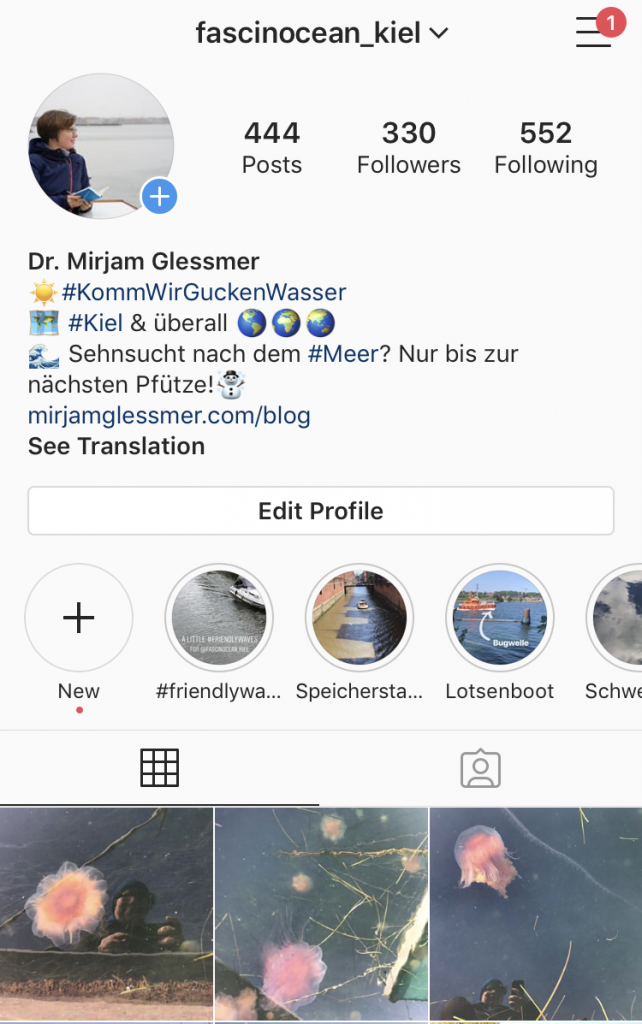