My friend Pierre, who I went to Saltstraumen with in 2012, wrote me a text about a year ago and asked me to remind him to tell me about 51 next time we met. We met and, as we do, geeked out about some hydrodynamics stuff. And he told me about 51. It turns out that on his way to work, Pierre crosses Straume Bru on the 51 almost daily, and watches the strong tidal currents and whirlpools that form there. But it wasn’t until a couple of days ago that we managed to take bus no 51 to this specific spot — Straume Bru — and geek out about it together! 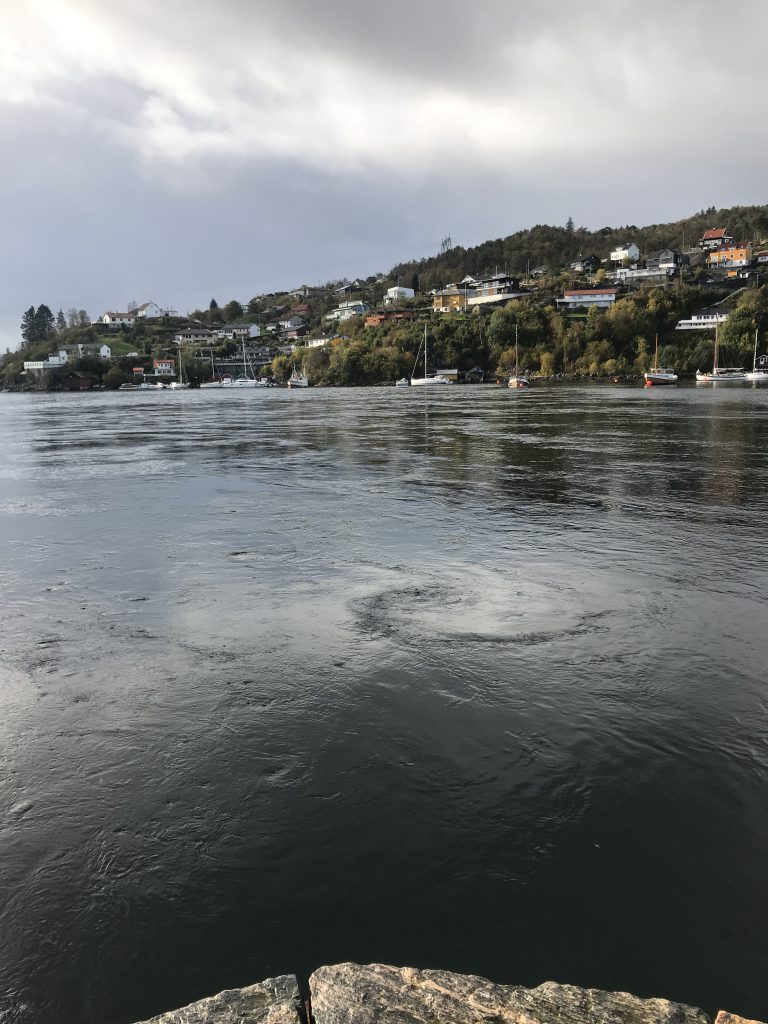 I got there about an hour before Pierre did. Not because he was late, but because I was so excited to finally see that tidal current I had heard so much about! And also because I had looked at the tidal forecast and wanted to make sure I would see the strongest current and not miss it by an hour. 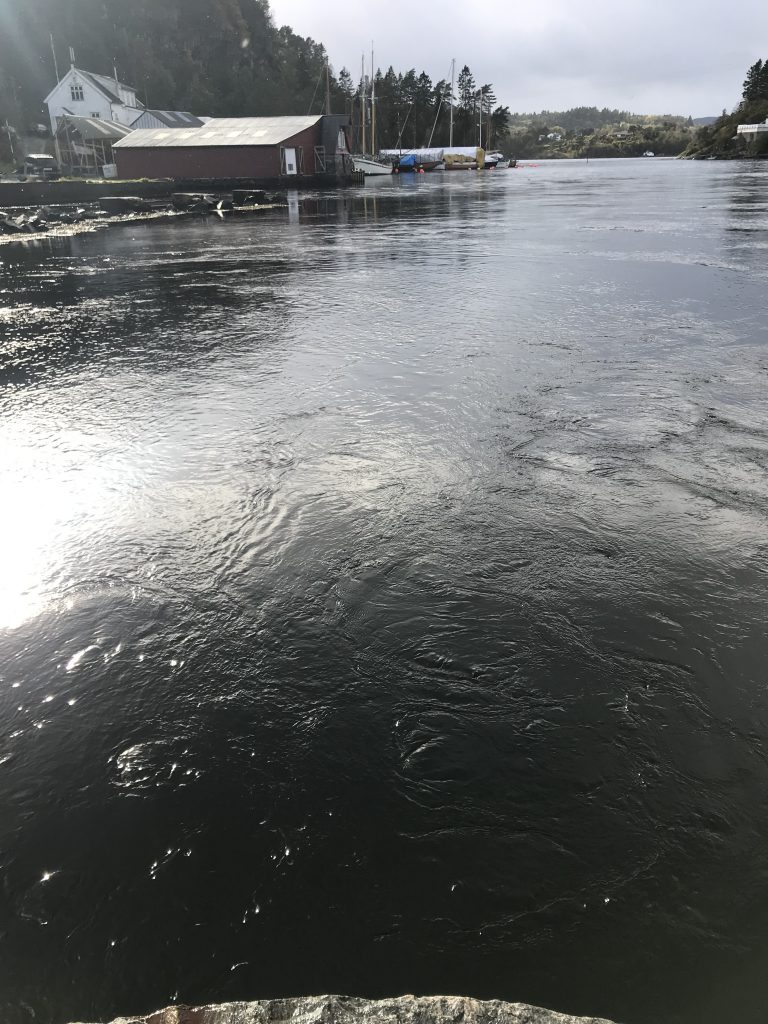 Turns out that when I arrived, the current was indeed quite strong. But look at the water level relative to the structures. Pretty much half time between high water and low water, even though the current is strong, there is still a lot of water left in the reservoir! 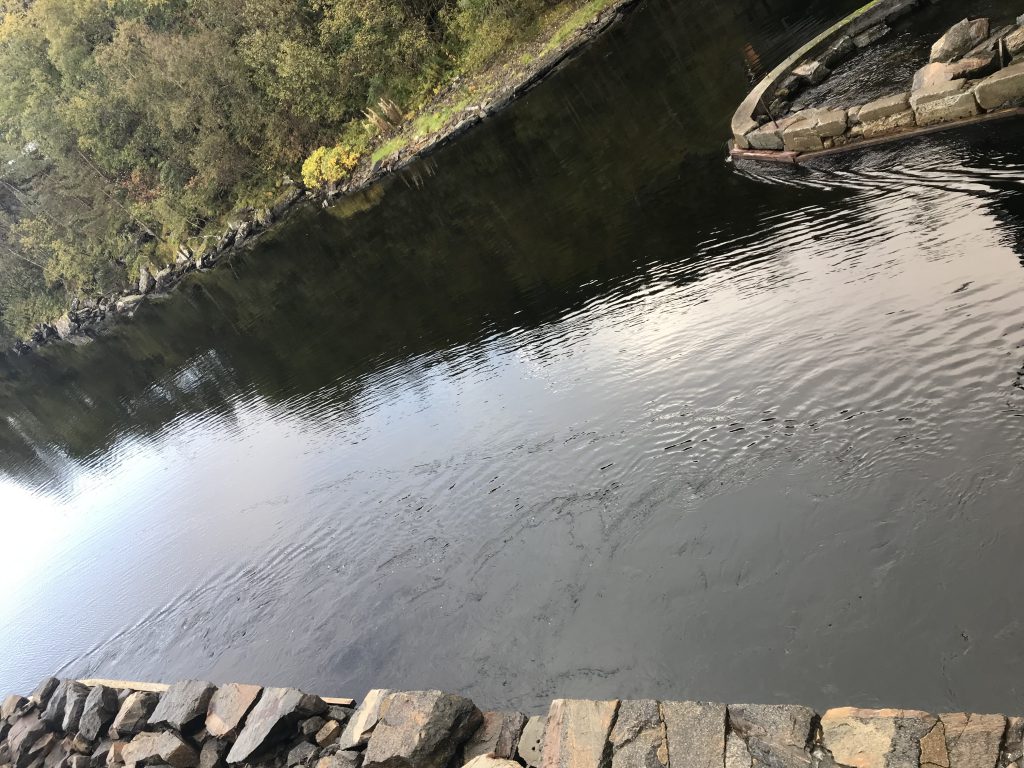 I love watching the waves radiating from the edge in that wall, and the wedge of eddies that is separating the fast flow from the boundary. 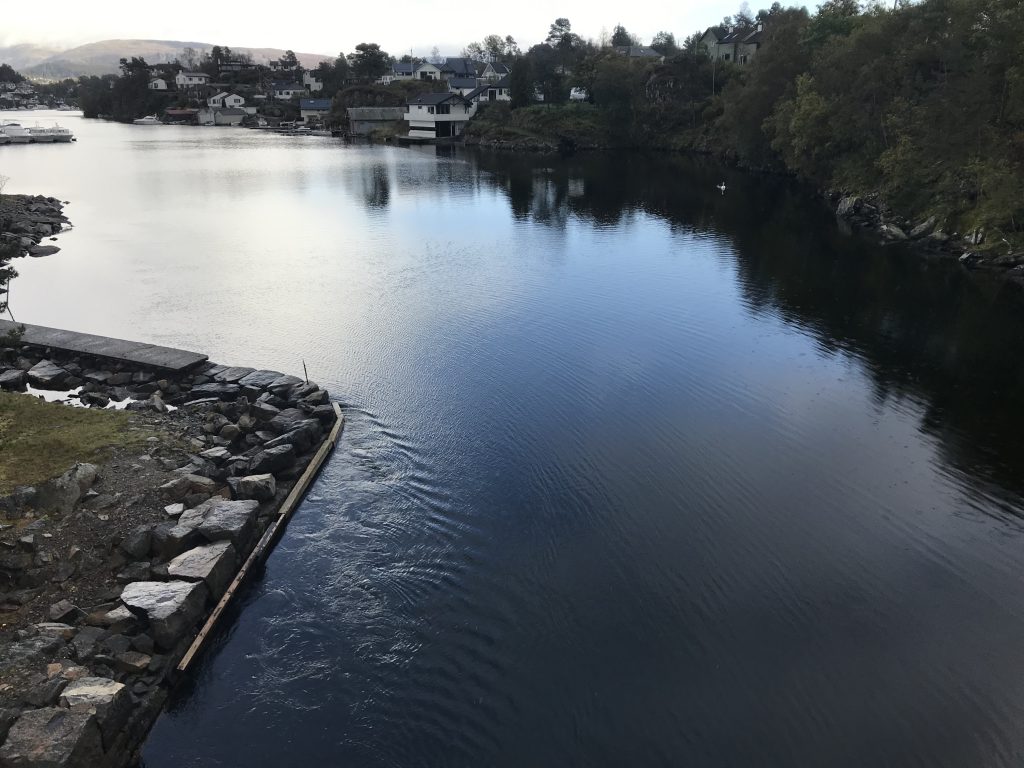 Also look at how the waves are being deformed by both the eddy and the current in the picture below! Especially in the top left corner, where the “wake” of the edge follows the meanders. 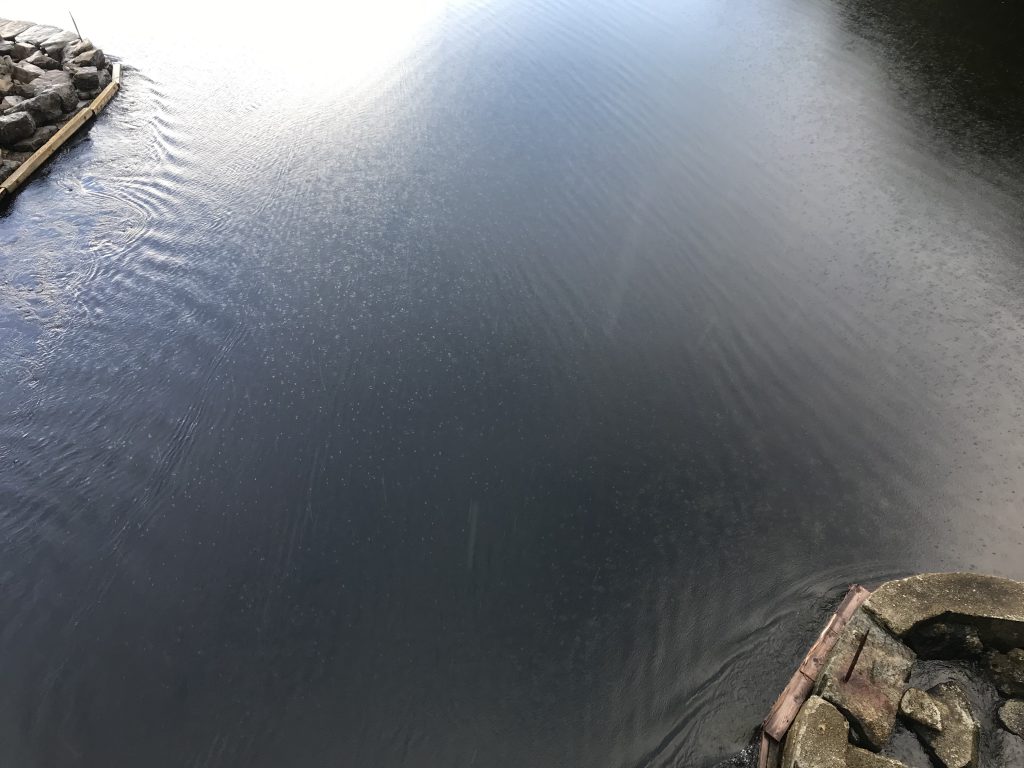 As had been forecasted, it started to rain while I was wave watching. With the surface a little rougher now, I noticed these two long streaks. Not sure what was going on there? 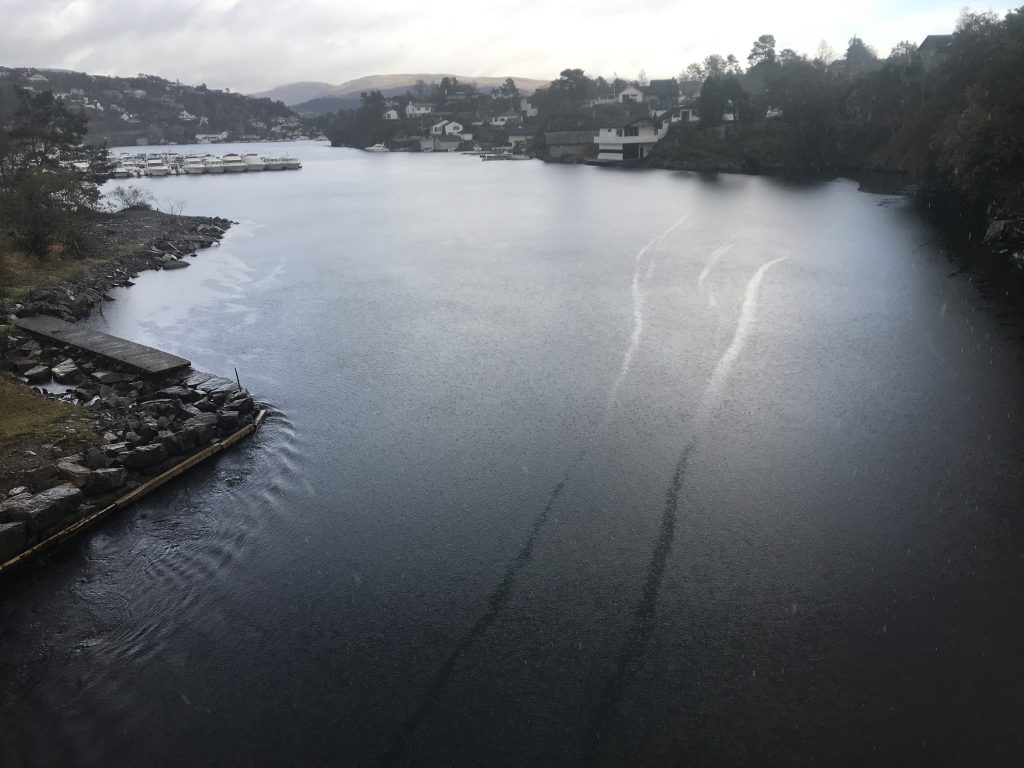 It didn’t look like oil or any surface film, but I can’t really think of anything else right now. I was briefly considering Langmuir circulation, but I don’t think the wind was steady enough and also I don’t know if that would combine well with a strong current. Any ideas, anyone? 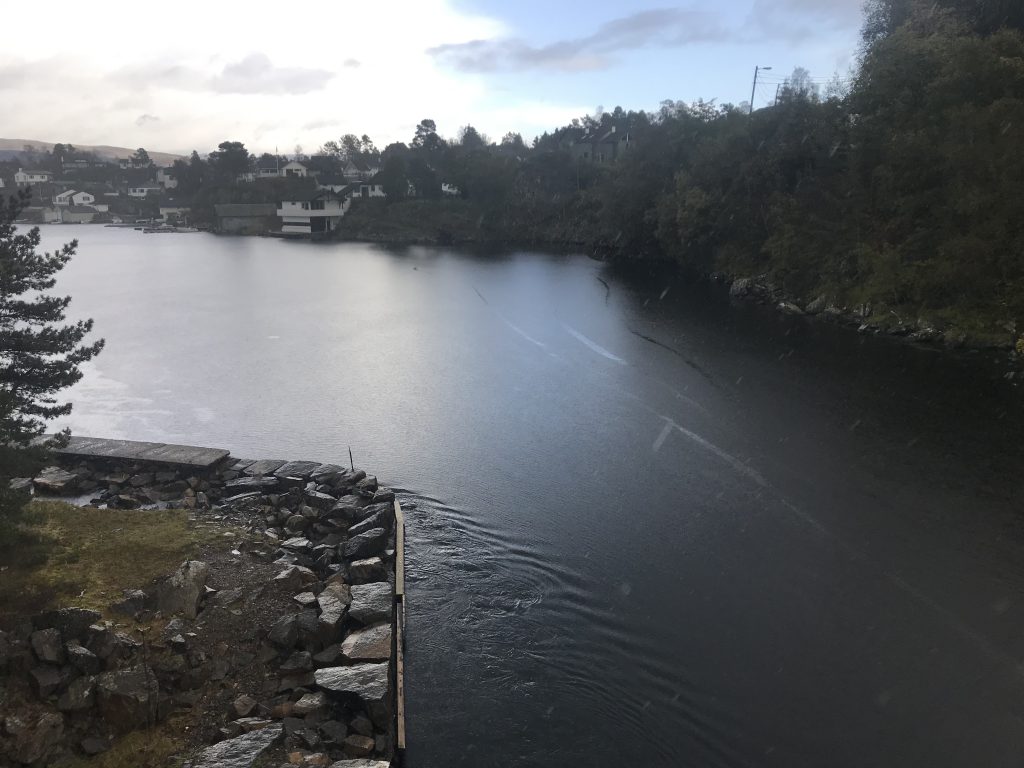 In any case, the stripes weren’t visible any more when the rain stopped. But look at all these amazing waves!

And, now looking downstream, some more eddies and whirlpools!

Looking upstream towards the bridge, we see the glossy V that is formed upstream of where the wakes meet that are formed by the walls on either sides of the outlet. 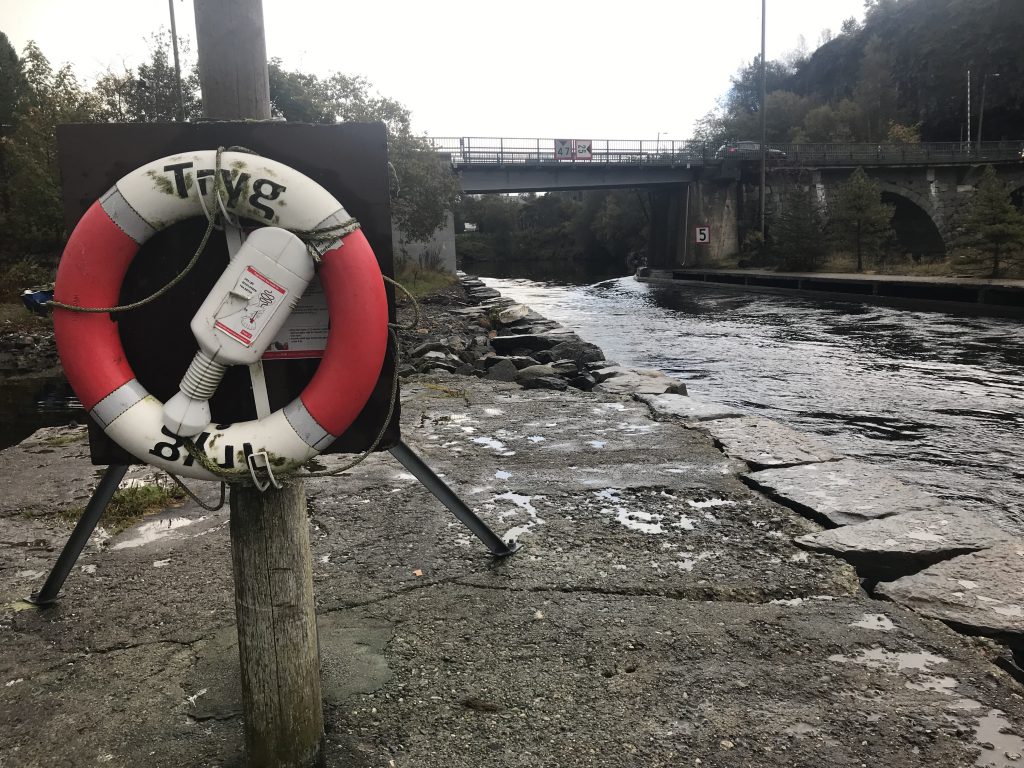 And downstream again — how awesome and cute are those little eddies? And how amazing is it that they can persist over long distances while maintaining a dip in the surface that is probably as long as my thumb? 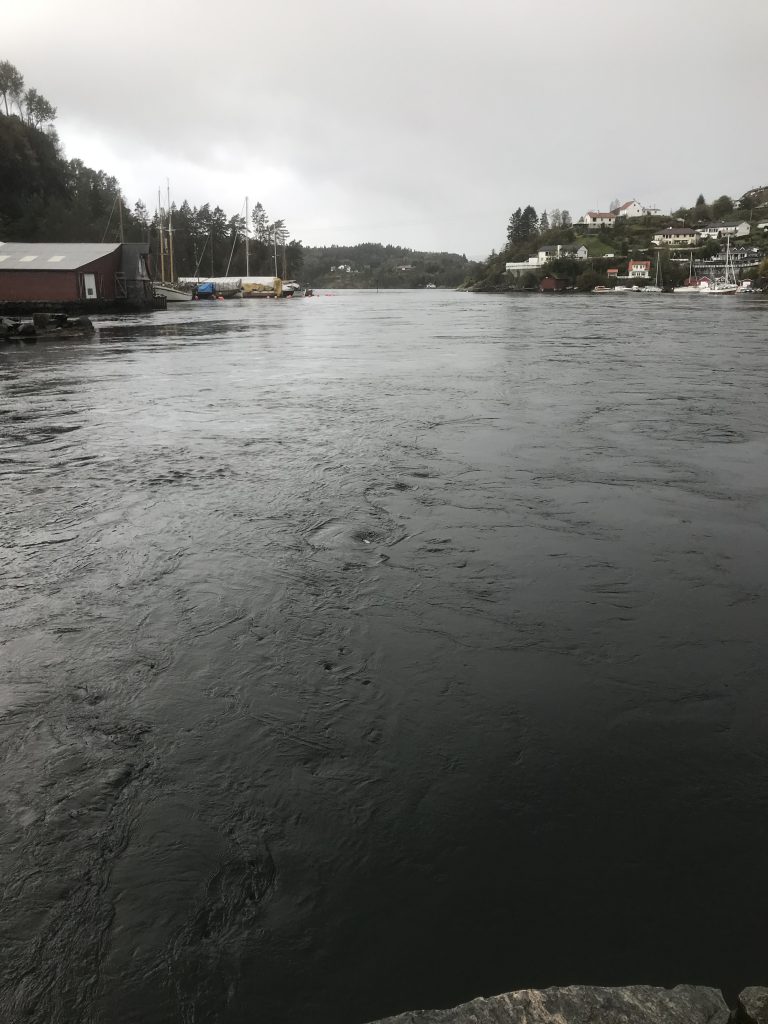 And not two seconds look the same!

Below is a closer look of the two wakes of the sides of the outlet coming together and overlapping. 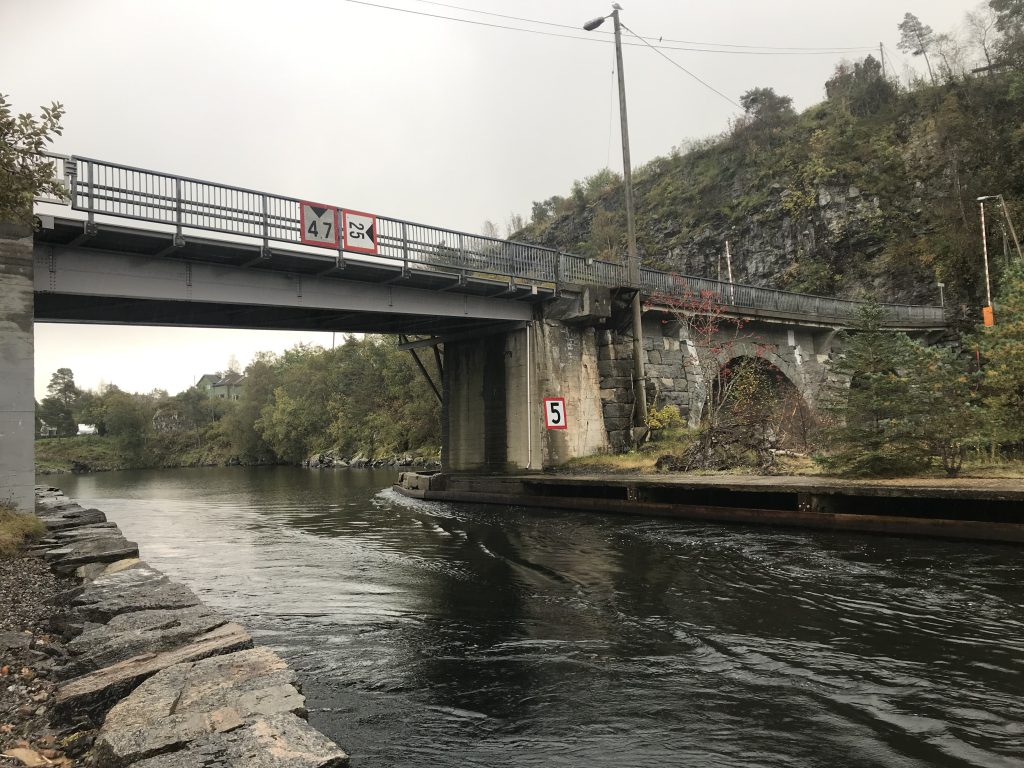 And here is another picture of the wedge of eddies that forms, separating the strong current from the more stagnant, turbulent boundary layer. Look at how irregular the wedge is, formed of eddies of different sizes that are being advected downstream! And also look at the waves that are being pulled with the current, leading to stripes along the current!

Here is another look at the wedge and the stripes of the waves that are being deformed by the current.

And another one, because the scenery is actually really pretty, too! Which I hardly noticed until I had taken about 500 pictures of the water ;-)

More eddies in the wedge. 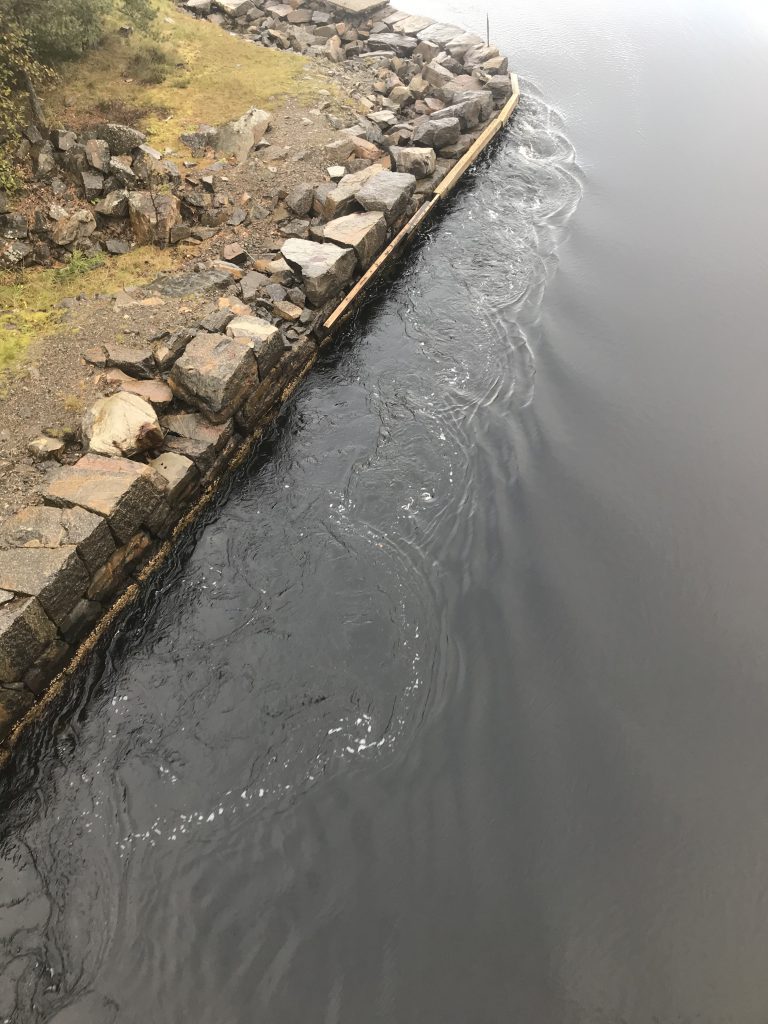 Interesting how one side of the outlet forms a wedge while the other “just” forms a wake, isn’t it? I think it’s because the the left one, the one with the wedge, restricts the current a lot more. 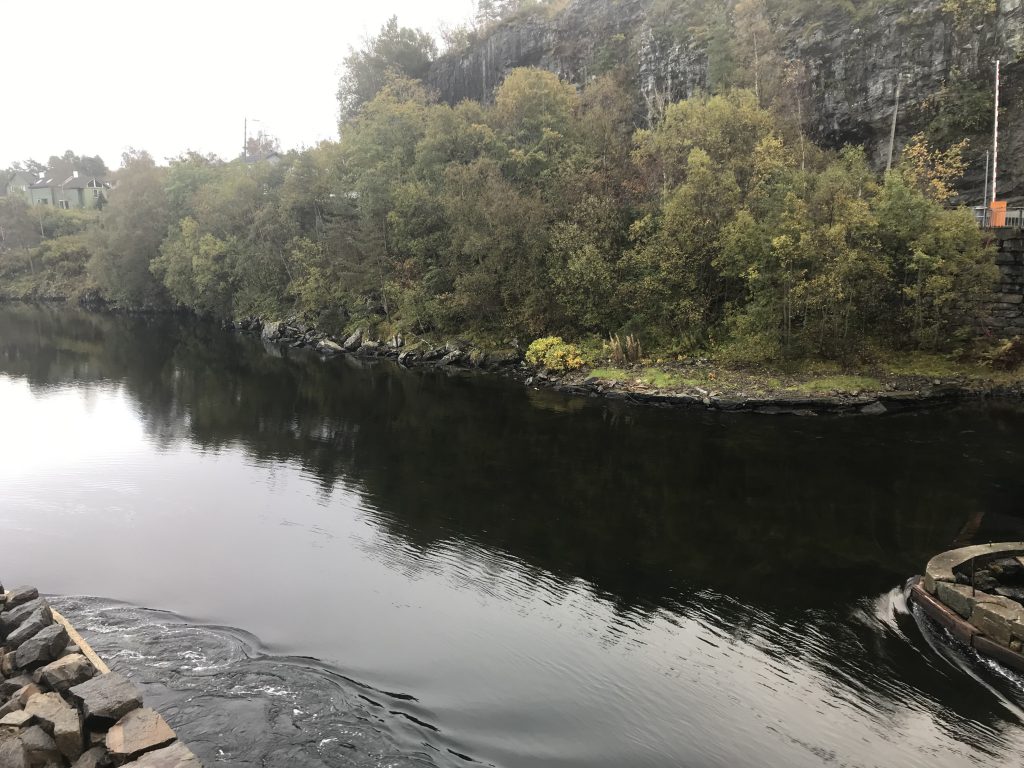 And here is a new perspective: Looking at the wedge of a second, parallel outlet. You see really well how the boundary layers from both sides come together! 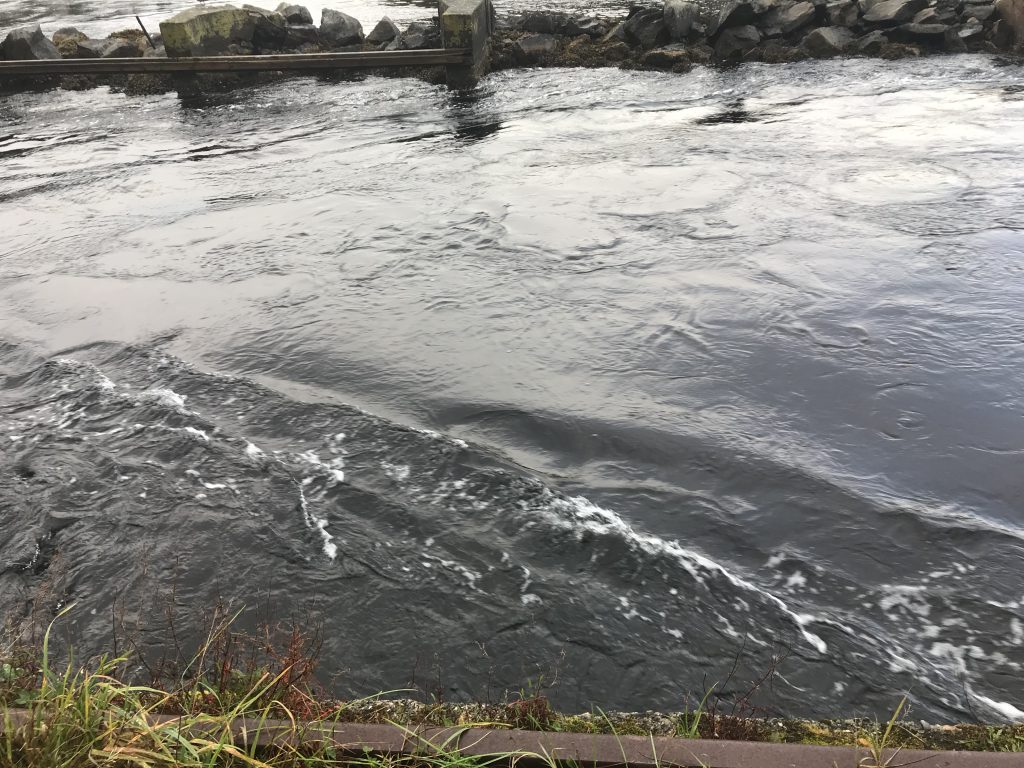 Looking upstream, the standing waves in the foreground give you an idea of how strong the current is! 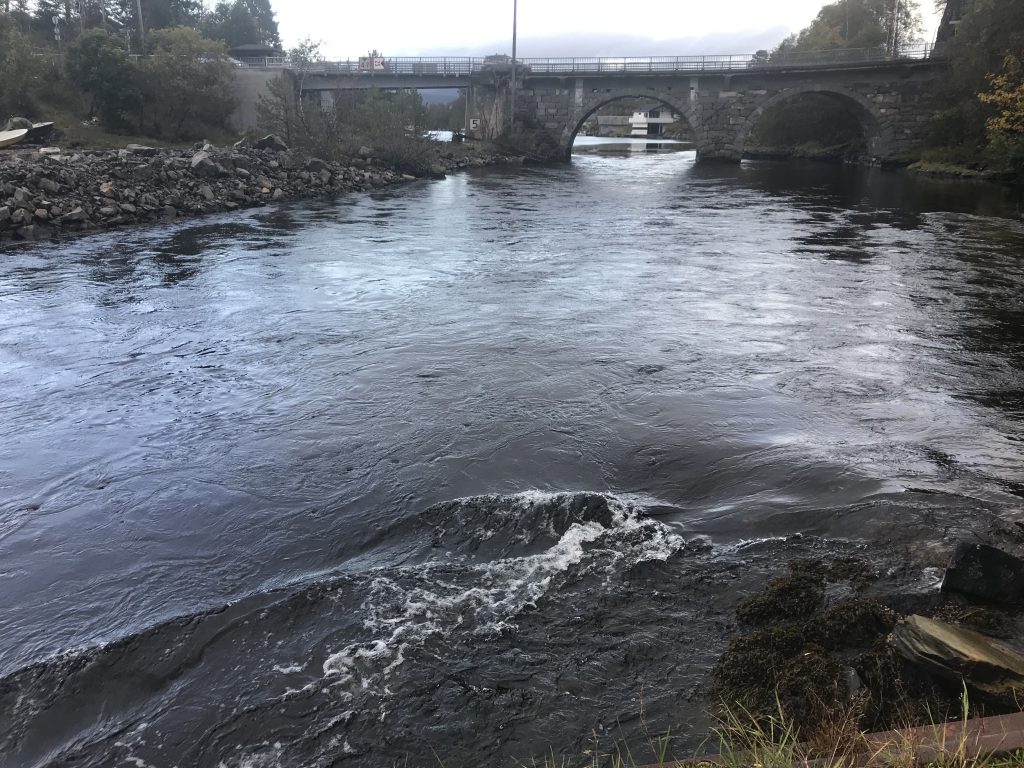 And another beautiful wedge! 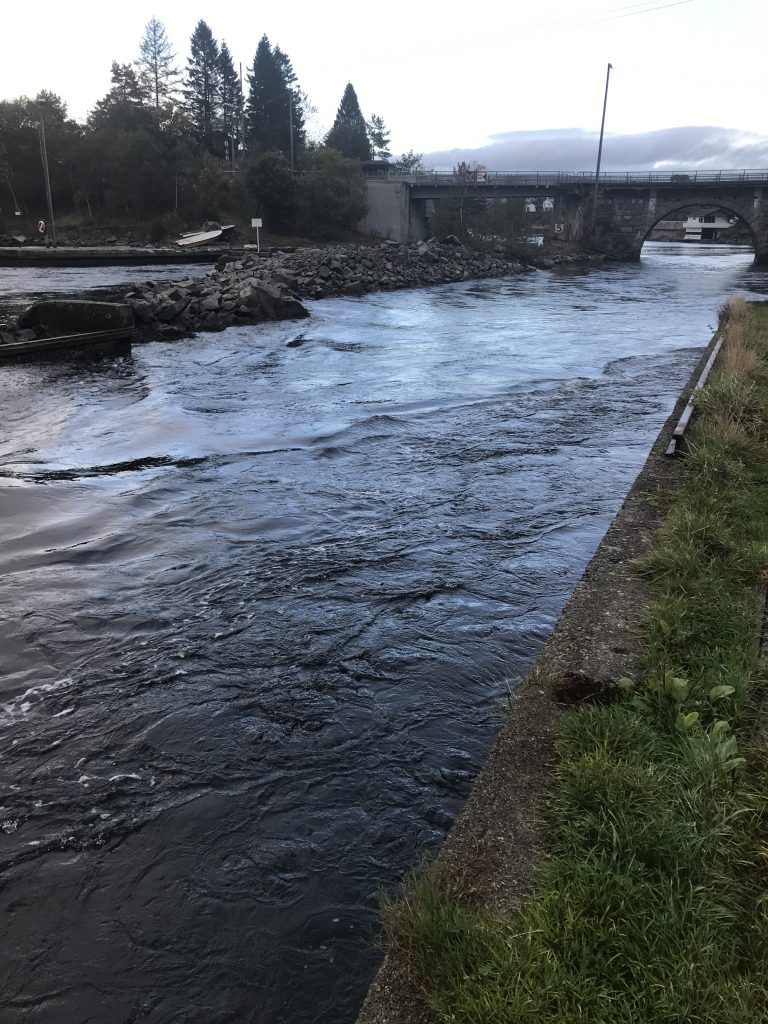 And more turbulence looking downstream. Funny how parts of the surface look so glossy and smooth, isn’t it? I think those are the areas outside of the current that aren’t turbulent.

Now a final excursion to the other side of the bridge, to look at the wakes of the structures. Notice how much less water there is now! 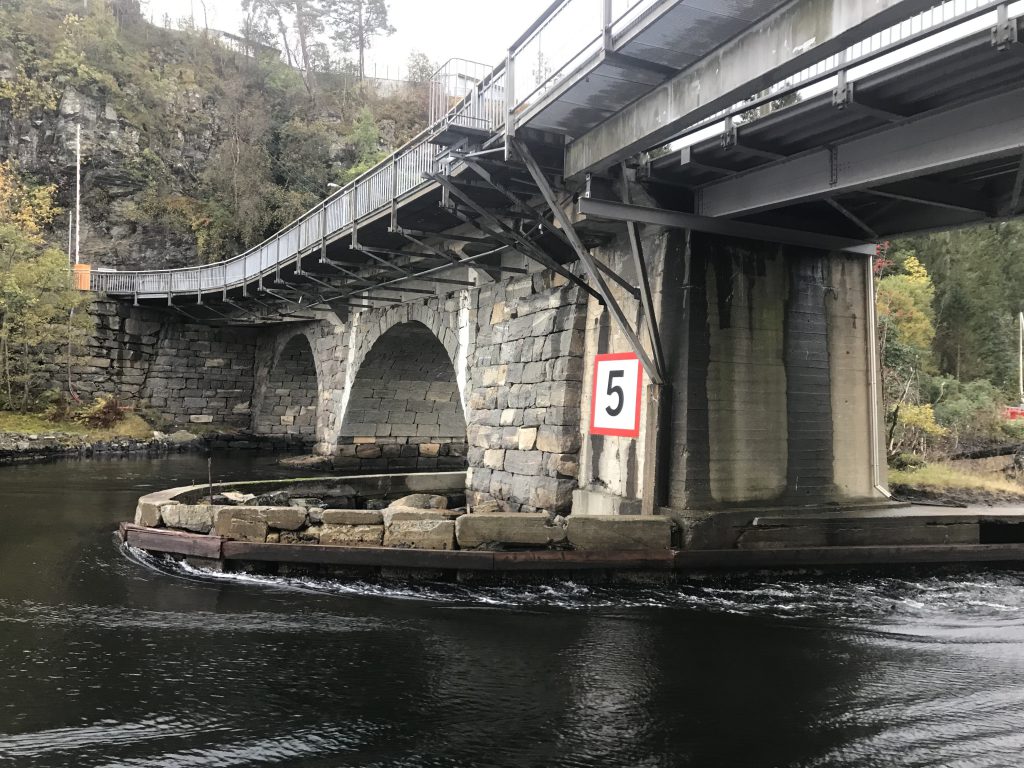 And here is the upstream part of the V. 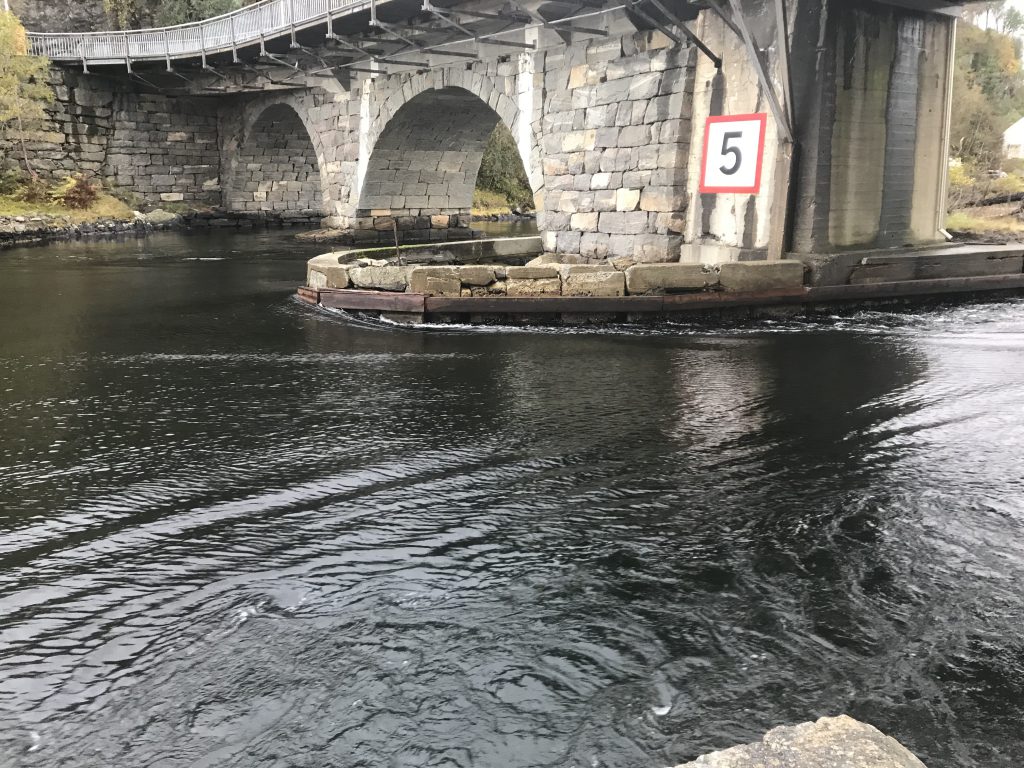 And the beginning of the wedge. 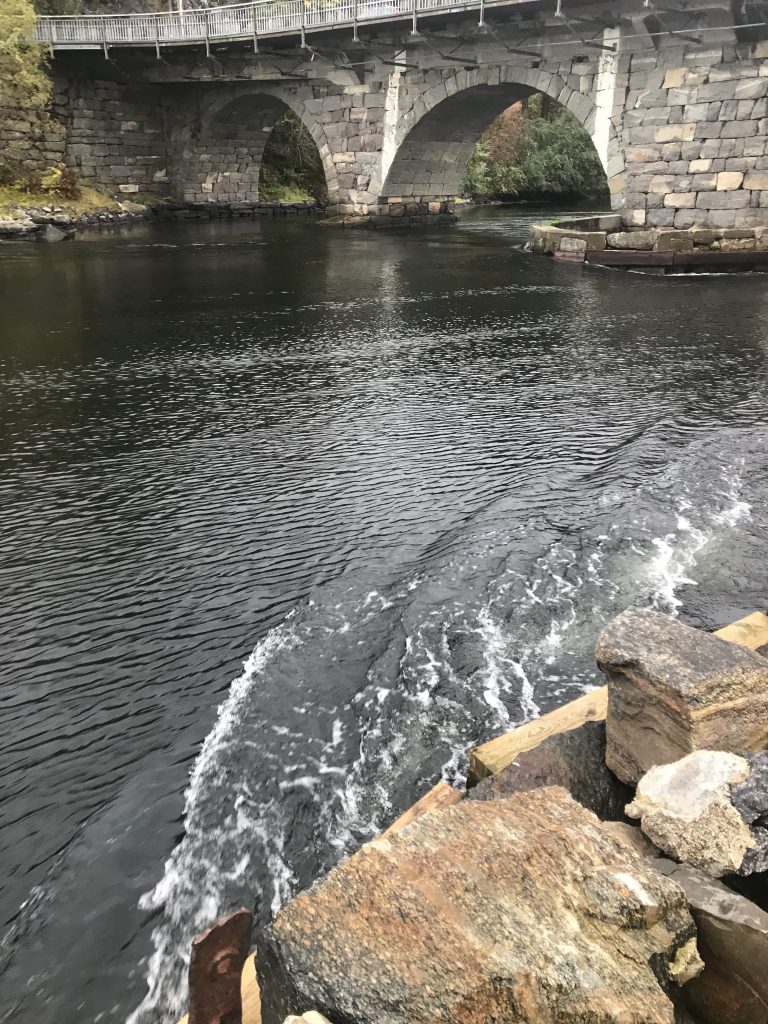 Walking a little around the corner, we see that the wake begins already upstream of the corner!

And a final look at the wake. 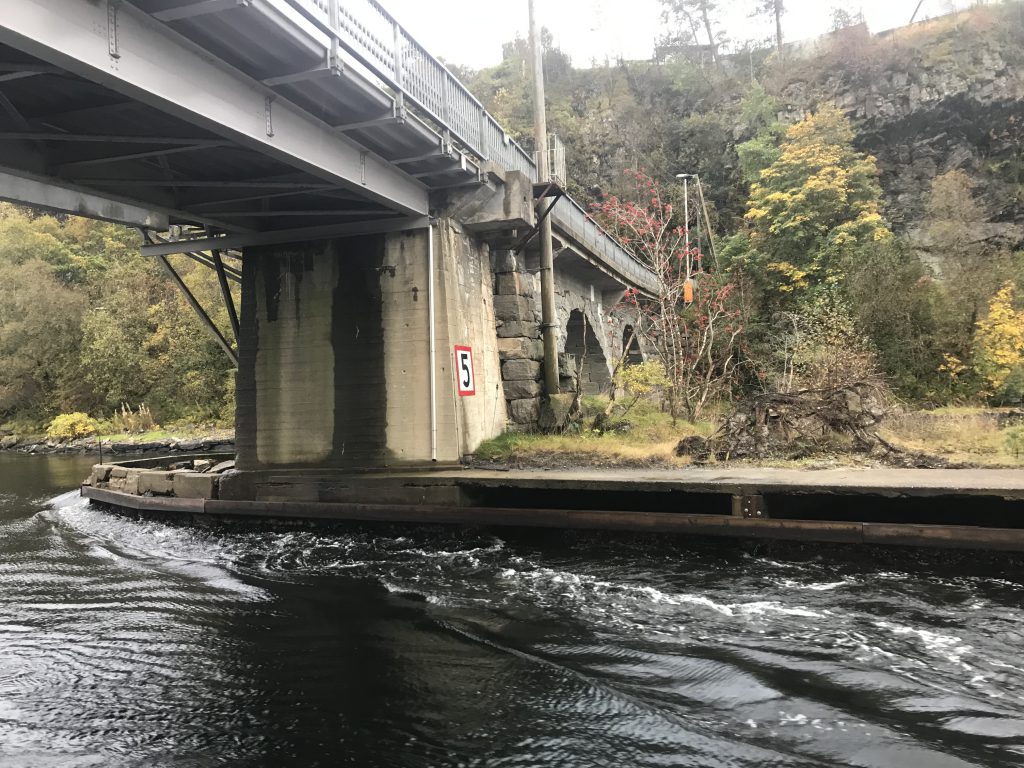 This is how happy wave watching makes me, even when it’s cooold and raining! At least occasionally, not the whole 1.5 hours I was there… The rain, I mean. Happy I was all the time :-) 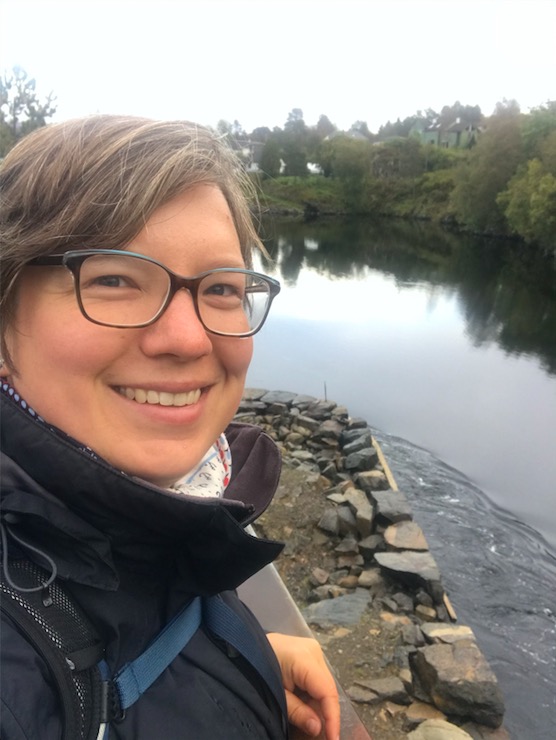 Two days later, I actually took the bus across the bridge (after another adventure with Pierre, more on that soon!) and the current went the other way! As it should, but it’s always nice to confirm theory. 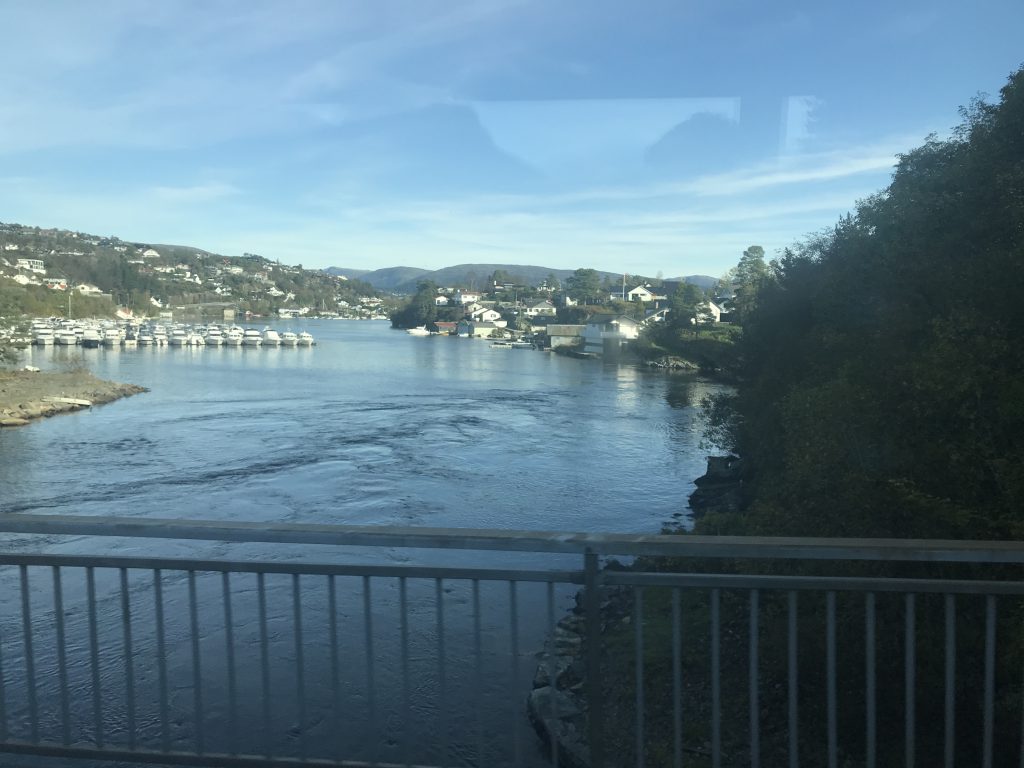 Anyone taking this bus regularly? You should start taking pictures for a time series! :-)

Related Posts to "The mystery of "51", or: Tidal current at Straume Bru":