How to adapt the same experiment to different levels of prior knowledge.

In this post, I presented an experiment that I have run in a primary school, with high-school pupils, in a Bachelor-level course and in a Master-level course. The experiment itself was run identically in all cases. However, the introductions, explanations and discussions about it obviously differed.

For example, in the primary school, I introduced this experiment by showing pictures of lions and penguins and other animals that the pupils knew live in warm or cold climates, and we talked about where those animals live. In the end this aimed at how temperatures are a lot colder at the poles than at the equator. This is the differential heating we need for this experiment to work. While this is something that I felt the need to talk about with the primary school kids, this can be assumed as a given with older students (or at least that is the assumption that I made).

With the university-level courses, one of the points that I made sure came up during the discussion are the limitations of this model. For example that we apply both heating and cooling over the full depth of the water column. How realistic is that? Or the fact that we heat at one end and cool at the other, rather than cooling on either end and heating in the middle?

With the university-level courses, we could also discuss other features that we could see during the experiment. Remember this image, for example? Let me zoom in on something. Curious features in the thermal conveyor experiment. Do you know what this is about?

Do you see these weird red filaments? Do you think they are a realistic part of the thermal circulation if it was scaled up to a global scale?

Another point that I would talk about with university-level students that I would probably not bring up with primary school kids (- although, why not if I had more time than just those 45 minutes per class?) is that ocean circulation is driven by more than just differential heating. Even when just considering the density-driven circulation, that is additionally influenced by changes in salinity. Put that together with wind-driven circulation and we are starting to talk about a whole new level of complicated…

But anyway. My point is that even primary school kids can benefit from doing this kind of experiments, even if what they take away from the experiments is not exactly the same as what older students would take away.

One of the main messages the primary school kids got seems to have been that you need to take curd cheese beakers for your warming element (look here for some reports (in german)). Not exactly my main message, but at least they were very observant of how the experimental setup was designed ;-)

A simple experiment that shows how the large-scale thermally-driven ocean circulation works.

Someone recently asked me whether I had ideas for experiments for her course in ocean sciences for non-majors. Since most of the experiments I’ve been showing on this blog were run in the context of Bachelor or Master oceanography-major courses, she didn’t think that the experiments were as easily transferable to other settings as I had claimed.

So here is proof: You can do pretty complex experiments with non-university level students. To prove my point, let’s go to a primary school.

Experimenting with a primary school class.

The experiment we are running here is the global (thermal) conveyor belt. In a long and narrow tank filled with water, a heating and a cooling element are inserted at either end. Dye is added onto the elements to visualize the flow of water. 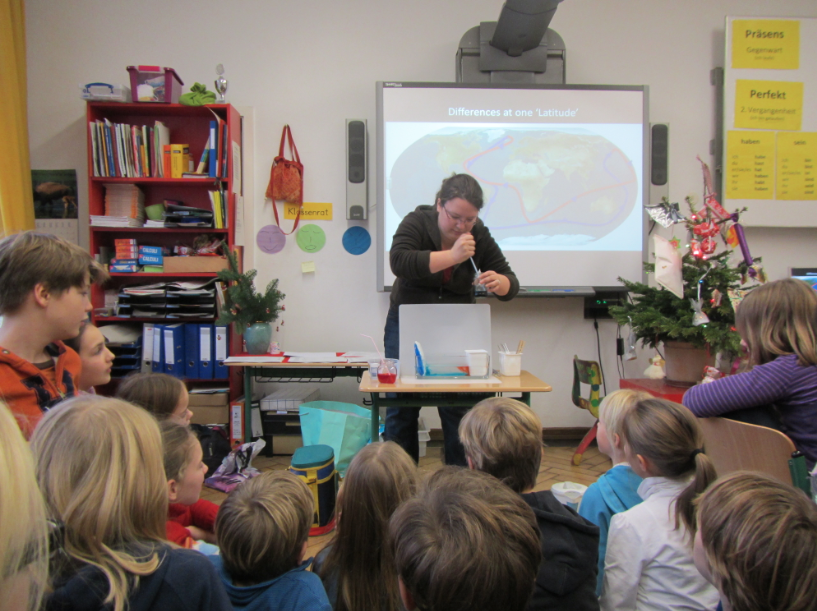 Adding dye to visualize the thermally driven flow in the tank.

In the image above you see that there is something blue near the bottom of the tank, and I am adding red dye to the other side. Blue is used to track the cold water and red to track the warm water (intuitive color-coding goes a long way, no matter how old your students are!) 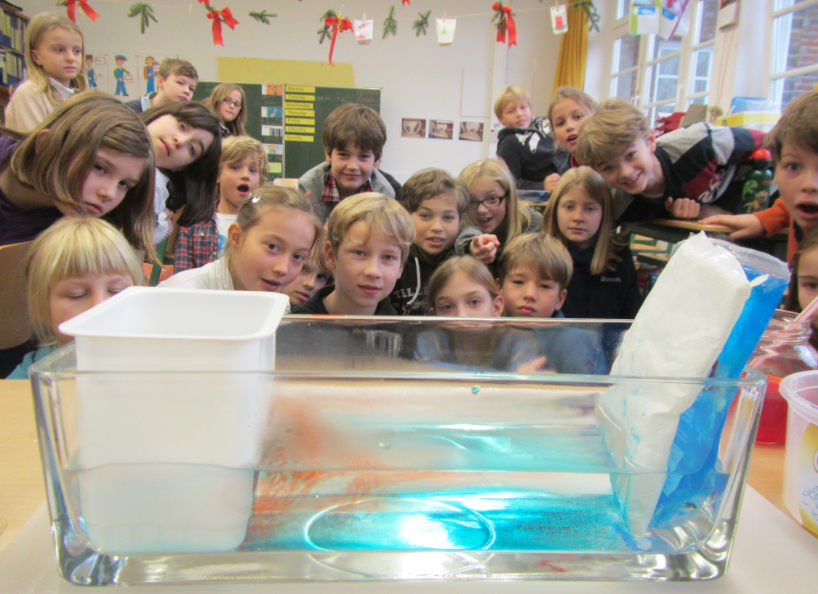 The experiment as seen by the teacher.

What you see here is the cold blue water sinking to the bottom of the tank and spreading, and the warm red water rising to the water’s surface and spreading there. As the warm water reaches the cooling pads, it gets cooled, becomes denser and sinks. Similarly, the cold water reaching the warming pads becomes less dense and rises, closing the loop.