This is seriously one of the easiest tank experiments I have ever run! And I have been completely overthinking it for the last couple of weeks.

Quick reminder: This is what we  hope will happen: On a slope, melt water from a dyed ice cube will sink, creating a Taylor column that will be driven down the slope by gravity and back up the slope by vorticity conservation, leading to a “westward” movement in a stretched, cyclonic trajectory. 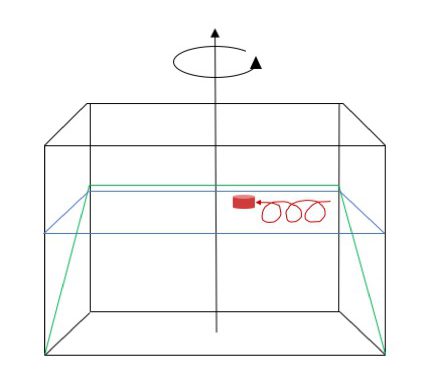 We are using the DIYnamics setup: A LEGO-driven Lazy Susan. And as a tank, we are using a transparent plastic storage box that I have had for many years, and the sloping bottom is made out of two breakfast boards that happened to be a good size.

Water is filled to “just below the edge of the white clips when they are in the lower position” (forgot to take measurements, this is seriously what I wrote down in my notes. We didn’t really think this experiment would work…)

The tank is then rotated at the LEGO motor’s speed (one rotation approximately every 3 seconds) and spun into solid body rotation. We waited for approximately 10 minutes, although I think we had reached solid body rotation a lot faster. But we had a lot of surface waves that were induced by some rotation that we couldn’t track down and fix. But in the end they turned out to not matter.

To start the experiment, Torge released a blue ice cube in the eastern corner of the shallow end. As the ice cube started melting, the cold melt water sank down towards the ground, where it started flowing towards the bottom of the tank. That increased the water column’s positive relative vorticity, which drove it back up the slope. 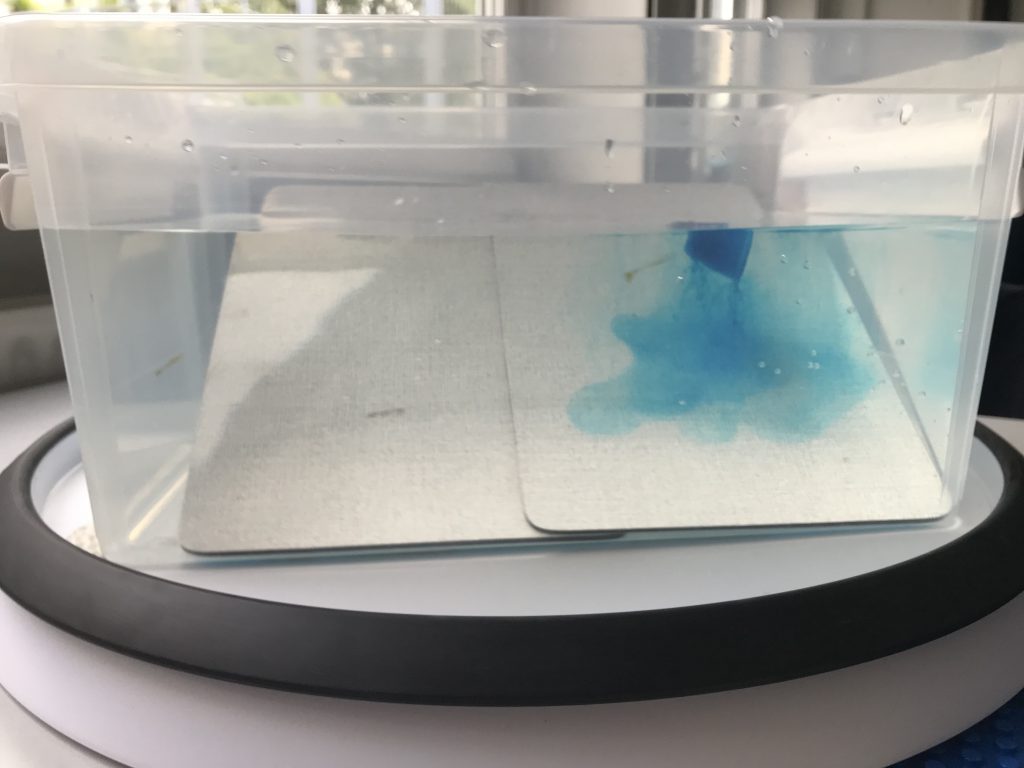 This was super cool to watch, especially since the ice cube started spinning cyclonically itself, too, so was moving in the same direction and faster than the rotating tank.

You see this rotation quite well in the movie below (if you manage to watch without getting seasick. We have a co-rotating setup coming up, it’s just not ready yet…)

And over time it becomes clear that the eddies that are being shed from the column rotating with the ice cubes are constant throughout the whole water depth. 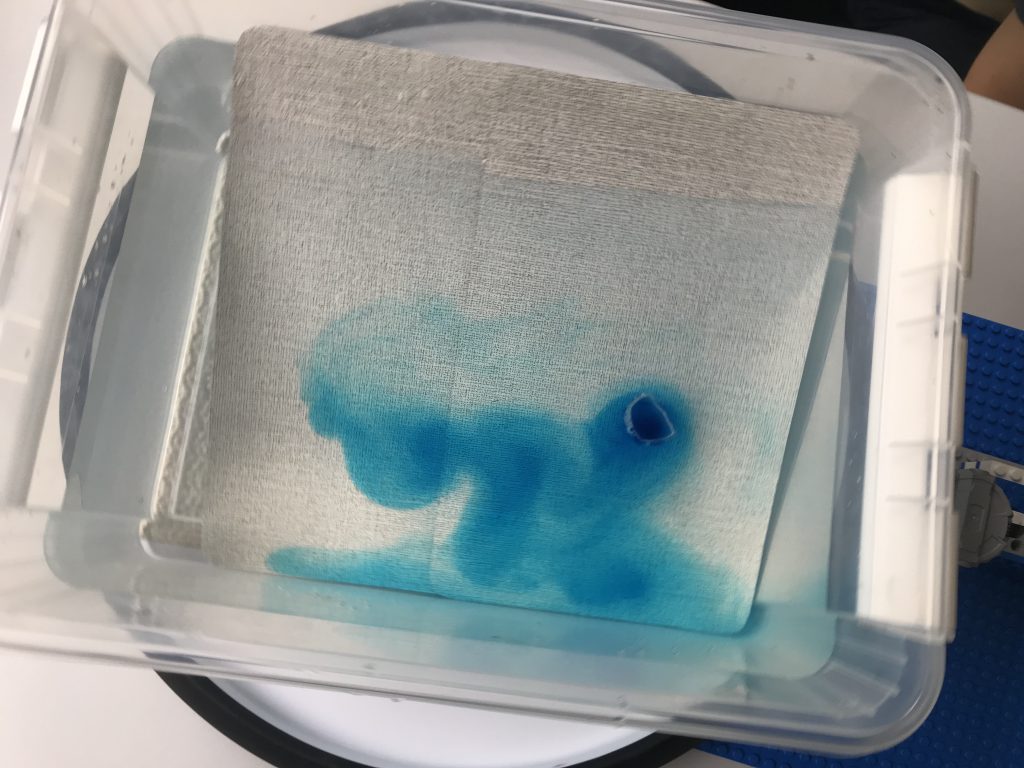 It is a little difficult to observe that the structure is really the same throughout the whole water column since the color in the eddies that were shed is very faint, especially compared to the ice cube and the melt water, but below you might be able to spot it for the big eddy on the left.

Or maybe here? (And note the surface waves that become visible in the reflection of the joint between the two breakfast boards that make up the sloping bottom. Why is there so much vibration in the system???) 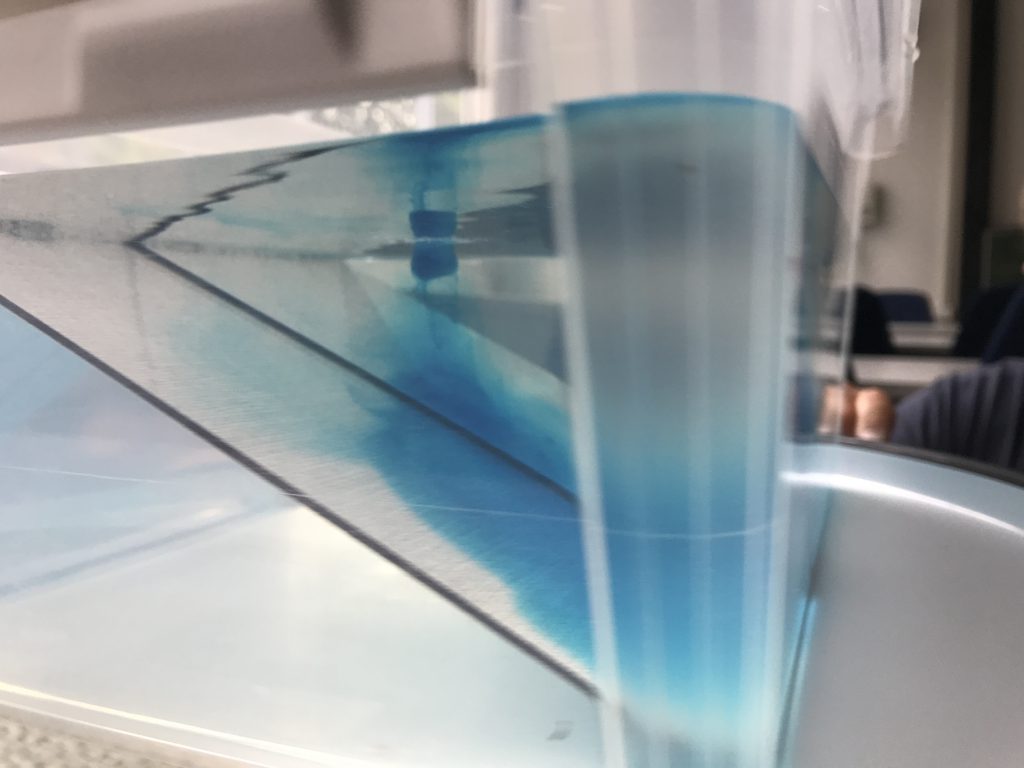 You can definitely see the surface-to-bottom structures in the following movie if you don’t let yourself be distracted by a little #HamburgLove on the back of the breakfast boards. Watching this makes you feel really dizzy, and we’ve been starting at this for more than the 8 seconds of the clip below ;-)

After a while, the Taylor column with the ice cube floating on top starts visibly moving towards the west, too. See how it has almost reached the edge of the first breakfast board already?

And because this was so cool, we obviously had to repeat the experiment. New water, new ice cube. 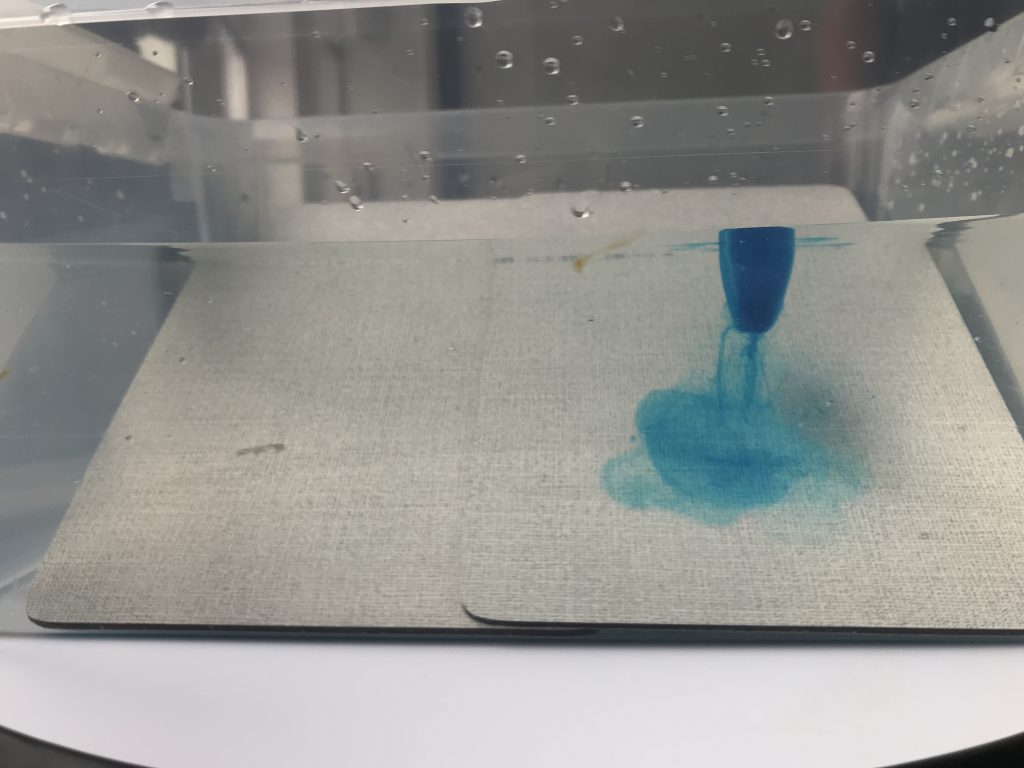 But: This time with an audience of excited oceanographers :-) 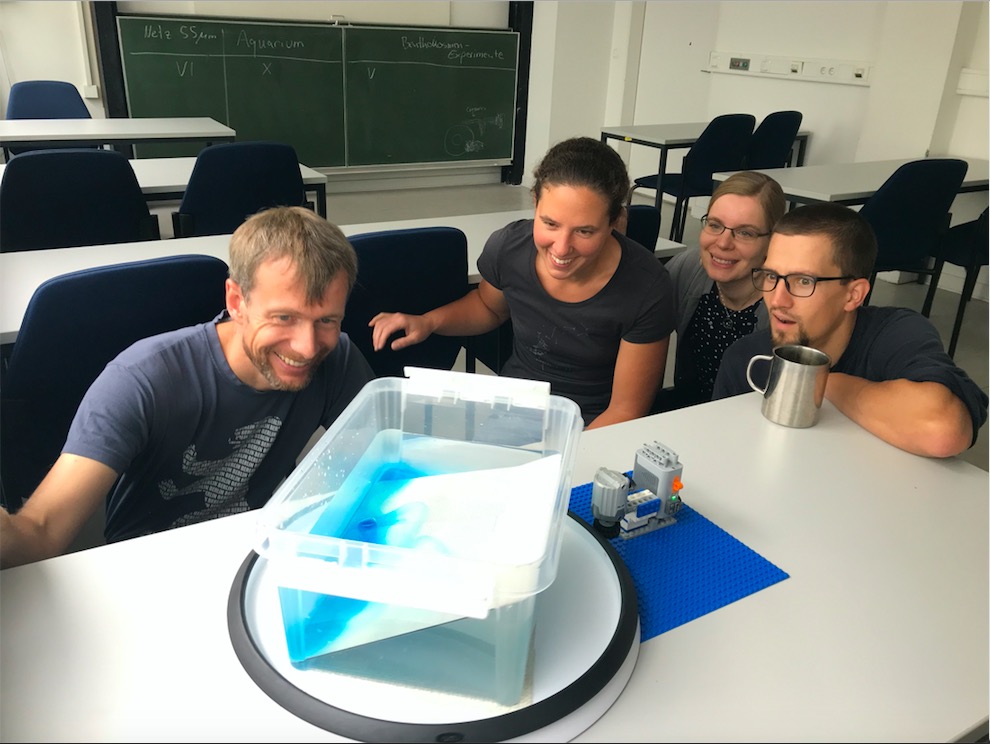 This time round, we also added a second ice cube after the first one had moved almost all the way towards the west (btw, do you see how that one has this really cool eddy around it, whereas the one in the east is only just starting to rotate and create its own Taylor column?) 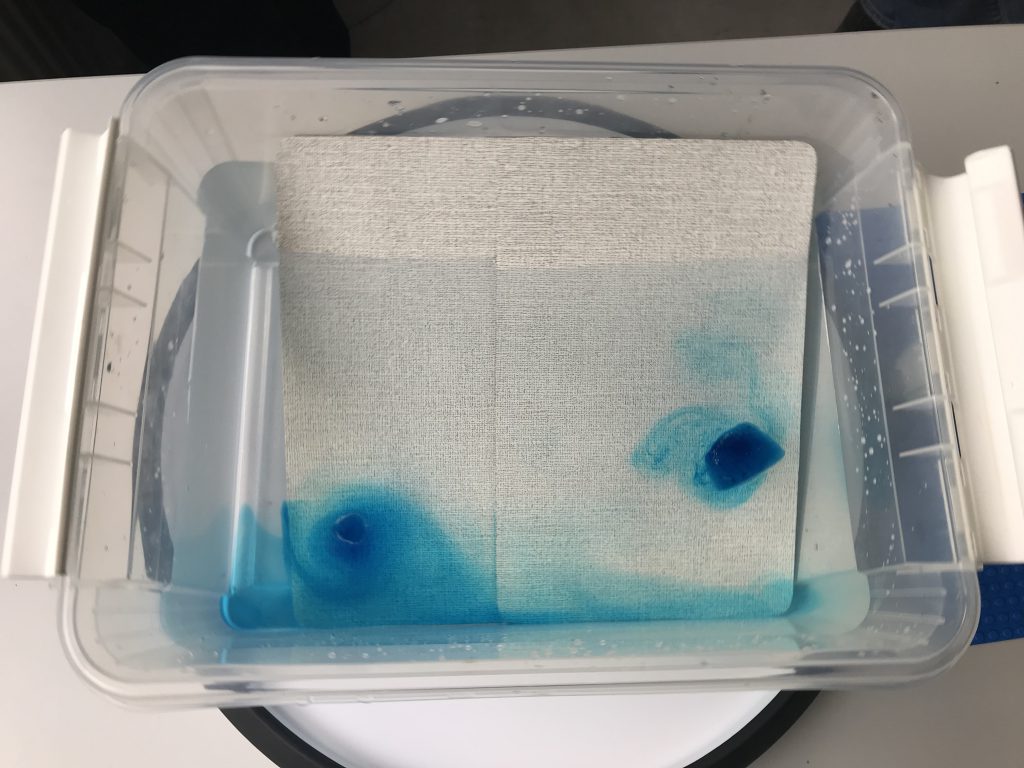 And last not least: Happy selfie because I realized that there are way too few pictures like this on my blog, where you see what things look like (in this case in the GEOMAR seminar room) and who I am playing with (left to right: Torge, Franzi, Joke, Jan) :-) 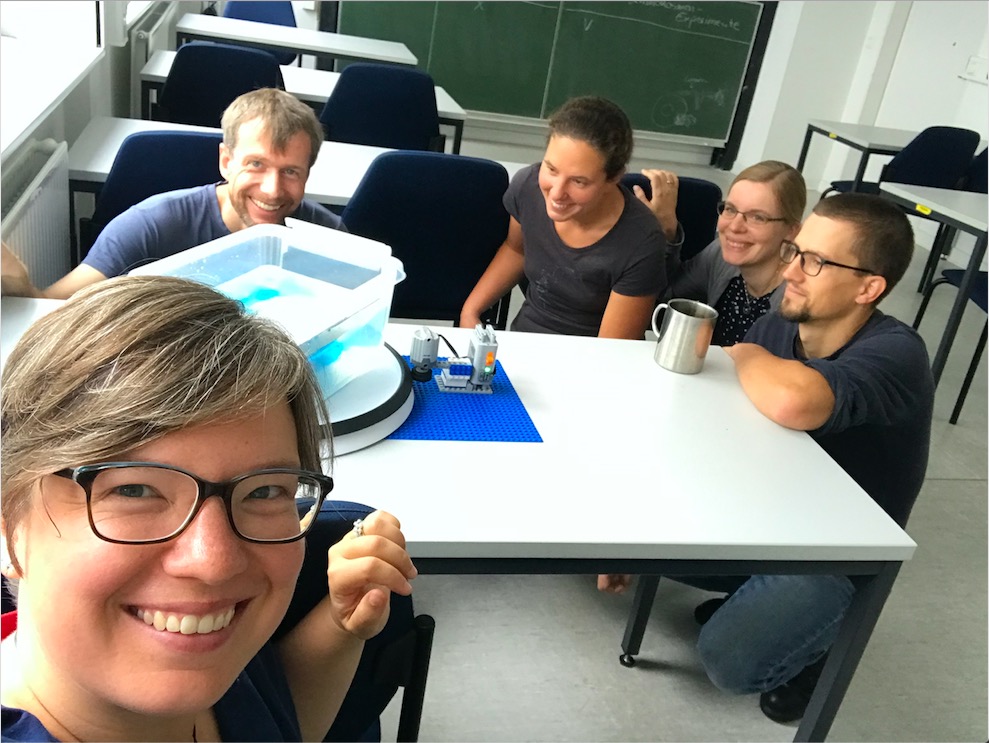