This text was written for GeoEd, the education column of EGU’s blog, and first appeared there on Nov 27th, 2015.

In my second year studying physical oceanography, I got a student job in an ocean modelling group. When I excitedly told my friends and family about said job, most of them did not have the slightest idea what I might be doing. Aside from the obvious and oh-so-funny “you are a model now?!”, another common reaction was “modelling – with clay?” and the picture in those people’s head was that of an ocean model resembling the landscape in a miniature train set, except under water. And while there are many groups seeking to understand the ocean by using simplified versions of the ocean or ocean regions, simplified geometries, selected forcings acting on it, etc – this is not the kind of model I was supposed to be working with.

Talking about climate models with the general public

Explaining to a laymen audience what a climate model is a daunting task. We have all seen the images of a region divided into smaller and smaller squares as a visualization of boxes which represent a grid on which a set of differential equations is solved, yielding a solution for each of the boxes (See Figure 1). But do we really expect everybody we show this to grasp the idea of how this might help to understand climate if they don’t have the background to understand what a differential equation is, let alone how it has been discretised and programmed and is now being solved? From my experience it is very difficult to keep people interested and captivated using this approach and, unless they already have a pretty solid background, it is unlikely they will actively engage in the topic and ask clarifying questions.

A new approach: Let them experience the process of building a model!

I therefore suggest we use a different approach. Instead of concentrating on explaining the mechanics of an ocean model, let us focus on letting people experience the idea behind it by using a “mystery tube” to represent the climate (or whatever process we want to model) and have the audience build their own “models”.

The mystery tube is all over the internet. I have not been able to find the original source but let’s look at what it is:

Basically, we have a tube that is closed off at the top and at the bottom (See Figure 2). Four pieces of string come out of it. When you pull one out, another one gets pulled into the tube. So far, so good. But the pattern of which string gets pulled in when another one gets pulled out suggests that there is something more going on inside the tube than just two pieces of string going in on one side and coming out at the other. So, how do we figure out what is going on? Some of you may have already seen a possible solution to the problem. Others might find one as soon as they’ve gotten their hands on a mystery tube and pulled on the strings a couple of times. Others might need their own tube and pieces of string to play around with before they are reasonably confident that they have an idea of how the mystery tube works. 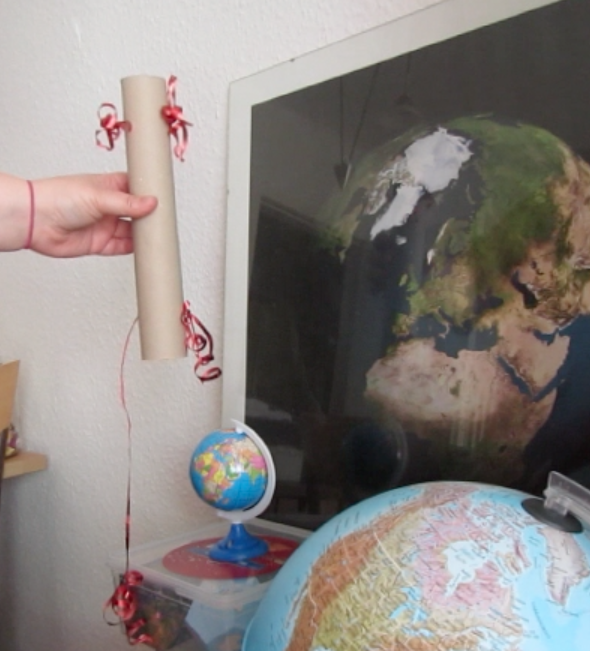 Figure 2: A very non-fancy mystery tube: A paper kitchen towel roll with two pieces of curly ribbon going through. But what goes on inside? Still a mystery!

If you were to use mystery tubes in outreach (or with your friends and family, or – always a hit – with your colleagues), it is in fact a good idea to have a couple of “blank” tubes and pieces of string ready and let everyone have a go at building their own mystery tube that reproduces the functionality of the original one. Ideally, as you will see below, you would have more than just the bare necessities ready and also offer flat washers, springs, paper clips or any other distracting material that might or might not be inside the mystery tube.

Why offer “distractor” materials? Because we are trying to understand how people come up with climate models, remember? The original mystery tube represents the process we want to model. We do not know for sure all the important components of that process, and therefore do not know what needs to be included in the model, either.

— SPOILER BELOW! If you want to solve the mystery tube mystery yourself, do not read on! —

Now, in the instructions on the internet the two pieces of string are connected inside the tube by way of a ring through which they are both fed. When I first build my own mystery tube, I was too lazy to search for a ring to connect the pieces of string, so I just crossed the two threads over. After all, the ring wouldn’t be visible in the final product, and the function would remain the same anyway!

Which brings me to the main point of this blog post, first made by my friend and fellow outreach enthusiast, Dr. Kristin Richter (http://kristinrichter.info, currently University of Innsbruck, Austria), who is always my first stop when wanting to bounce ideas for demonstrations or experiments off: This is exactly why modelling climate is so difficult! We can build a perfectly working mystery tube but unless we cut open the original one we will never know whether our solution is the same as the one in the original mystery tube, i.e. whether there is a ring inside, or a paper clip, or the two pieces of string are just crossed.

You might argue we could find out what is inside the original mystery tube by other means, for example by shaking it and listening for rattling, by weighing it, or by many other methods. Yet, can we ever be sure we know exactly what is inside? And more importantly, would we even think of shaking or weighing the mystery tube if we weren’t specifically looking for what connects the two pieces of string? And are we really sure we are reproducing the full functionality of the original mystery tube? Maybe the original ring has a blade on the inside, so after a certain number of experiments one of the strings will be cut? Or maybe there is something else inside that will happen eventually, but that we cannot yet predict because our mystery tube, while reproducing what we observed from the original tube, just does not include that element.

The same goes for climate models, of course. We can reproduce what we observe reasonably well. Assuming we know of all “parts” of the climate and how they work together, we can make a prediction. But the climate is a lot more complex than a mystery tube. Of course, climate models are based on physical principles and laws and not just best fits to observations. Yet, in many places decisions have to be made for or against including details, or for representing them by one parameterisation and not another.

Can we ever know for sure what the future will bring?

So does that mean we should give up on making models of the climate because, while we might be able to reproduce the status quo, prediction is impossible? Absolutely not! But we need to be aware of the possibility of feedback mechanisms that might become important once a threshold has been crossed or tipping points (like when a hypothetical blade inside the ring will have cut through one of the pieces of string). If we are aware that there might be more to the mystery tube than just the pattern of how strings move which we observed at the beginning of this post, we can watch out for signs of other components. Like listen intently to the noise the string makes when gliding through the mystery tube, or listening for rattling when you shake the tube, or monitor the strings for wear indicating there might be a hidden sharp edge somewhere.

Once we have gone through all this with our audience, I bet they have a better idea of what a modeller does – even though they still might not have a clue what that means for the average day at work. But typically, people find the mystery tube intriguing, and you should definitely be prepared to answer a lot of questions about what your model does, how you know whether it is right, what processes are included and what are not, and voilà! We are talking about how to make climate predictions.

Related Posts to "Outreach activity: How do we make climate predictions?":