When we speak about “observing waves”, we usually mean looking at the water’s surface as an opaque surface that reflects the sky and where we see waves mainly due to being lit differently on different sides. But there are other ways to observe waves!

For example by how they focus light on the ground below. In the picture below you clearly see several groups of waves formed of smaller ripples. Of course what we see when we look at the lighter and darker spots on the sea floor is not only an image of the waves above, but it is also influenced by the structure of the seafloor itself. You see that below: The ripples in the sand distort the image of the waves a little. Nevertheless, it isn’t too difficult to see which general shapes are due to the waves and which due to irregularities in the surface below.

Sometimes the lighting is such that you can see both into the water in some places and then see the sky reflected in others. The places that reflect the sky are showing waves the way we would usually observe them. In the picture below, we see wind ripples in the background, and in the foreground two main wave fields: one coming towards the viewer with crests parallel to the shore line on which I am standing, and a second field, whose crests are perpendicular to those of the first field.

But in the region where we can look into the water, only the second wave field shows up clearly in the lighter and darker regions on the sea floor!

Still, those regions give us a lot of information about the wave field that we don’t usually observe. For example all the small structures below don’t show up as clearly when we look at the sky-reflecting regions, do they? I find it quite fascinating how all those structures that show up on the ground are a lot more difficult to observe when just looking at the sea surface. Would you have guessed that there are so many tiny ripples on the surface? And also here, the wave crests perpendicular to the shore I am standing on show up a lot more clearly in the light and dark on the sea floor than on the surface, don’t they? Even easier to spot in a movie:

Beautiful day to be watching the water! :-)

A 1.5 hour walk around a lake — and 242 photos of said lake — later I can tell you one thing: You definitely don’t need to live close to the coast in order to observe wave phenomena!

The idea to go on a “wave hunt expedition” is actually not mine (although it definitely sounds like something I could have come up with!), it’s Robinson’s idea. Robinson had students go on wave hunt expeditions as part of their examination, and present their results in a poster. I was so impressed with that, that I had to do it myself. Obviously. So the second best thing about work travel (right after the best thing, again, obviously!) is that I find myself in a strange place with time on my hand to wander around and explore. Not that Münster might not have been a nice city to explore, but the lake…

Anyway. I only want to show you 53 out of the 242 pictures. I was going to annotate all of them so you actually see what I mean. And I started annotating. But since I am giving a workshop tomorrow (which is all prepared and ready, but I do need my beauty sleep!) I only drew the key features in the pictures, and you will have to come up with the correct keywords all by yourself (have your pick: refraction! diffraction! fetch! interference! :-)) So click through the gallery below and see first the original photo and then one that I drew in. Do you spot the same stuff that I saw, or what else do you see? Let me know! 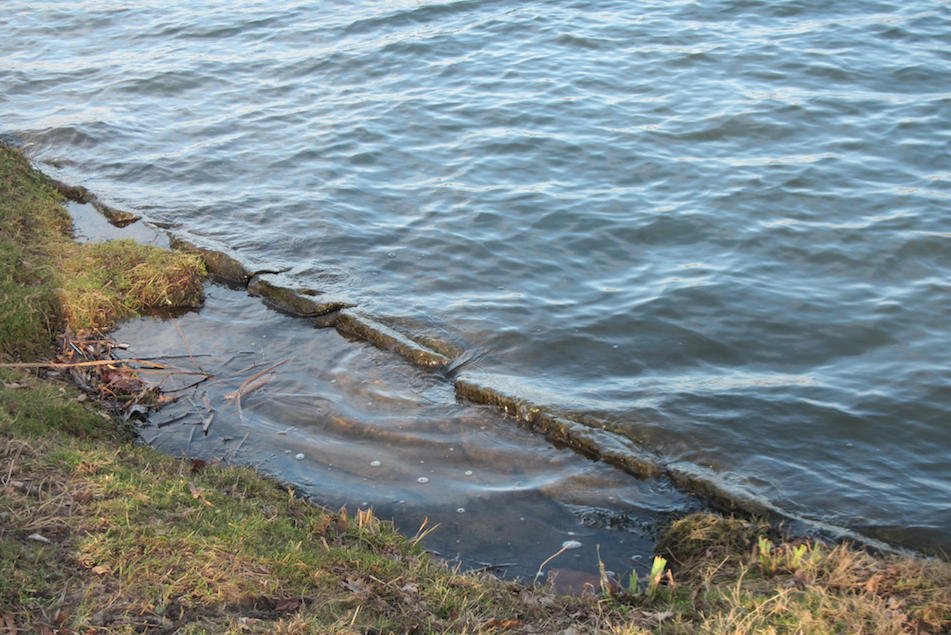 If you think it would be useful to see all those pictures with proper annotations and descriptions at some point please let me know. I might still be excited enough to actually do it, who knows…

P.S.: I actually really enjoy work travel for the work parts, too. For example, I went to a great workshop in Dortmund earlier this year to learn about a quality framework for quantitative research, and that workshop was amazing. And a week ago, I went to Stuttgart for a meeting with all the fellows of the Stifterverband für die Deutsche Wissenschaft, which was also great. And now I am giving this workshop in Münster, that I am actually really excited about because I managed to condense pretty much all I know about “active learning in large groups” into a 2.5 hour workshop. Just so you don’t get the wrong idea about my priorities. Obviously water comes first, but then work is a very close second ;-)