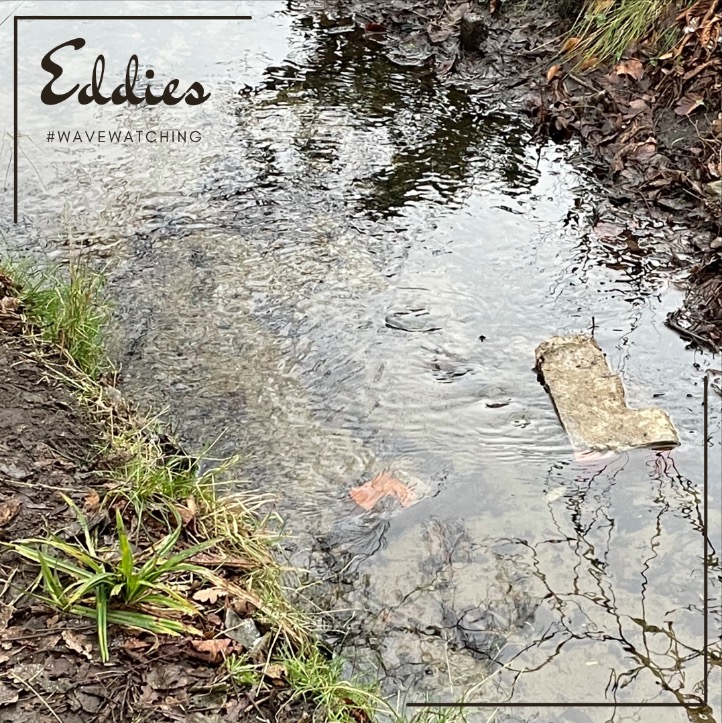 When a current suddenly gets pinched, different things can happen, for example: standing waves can appear both upstream and downstream and exactly at the narrowest point (in this case we see them feathering away from the lower edge of the large stone); or eddies can detach from the edge. I can spot four, do you see them? If not check the next pic! 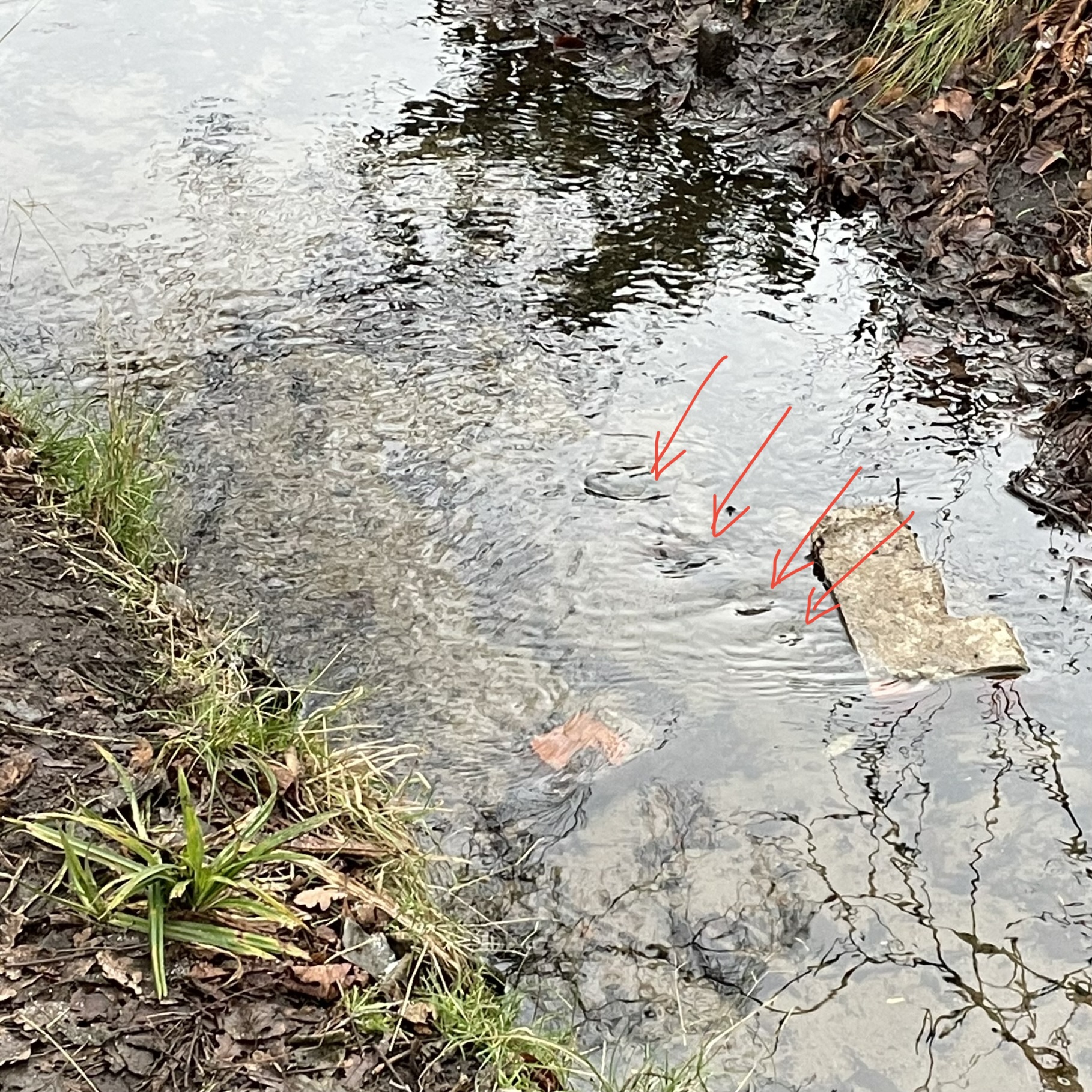 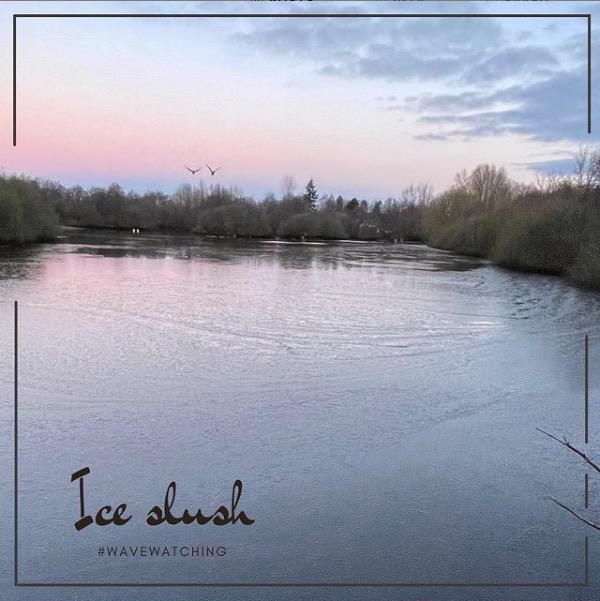 Pretty light this morning over an icy lake. Again, we see open water in the far back (where the reflections of the bushes are dark and sharp-edged and the birds are just taking flight) and then more and more small pieces of ice towards the bottom of the picture (where I am standing on top of the lake’s only outlet. See how the ice slush is slowly flowing towards me, sometimes converging in stripes? At the very bottom of the picture, the ice cover is closed because enough ice has accumulated that the gaps between the individual pieces froze shut.⁠ 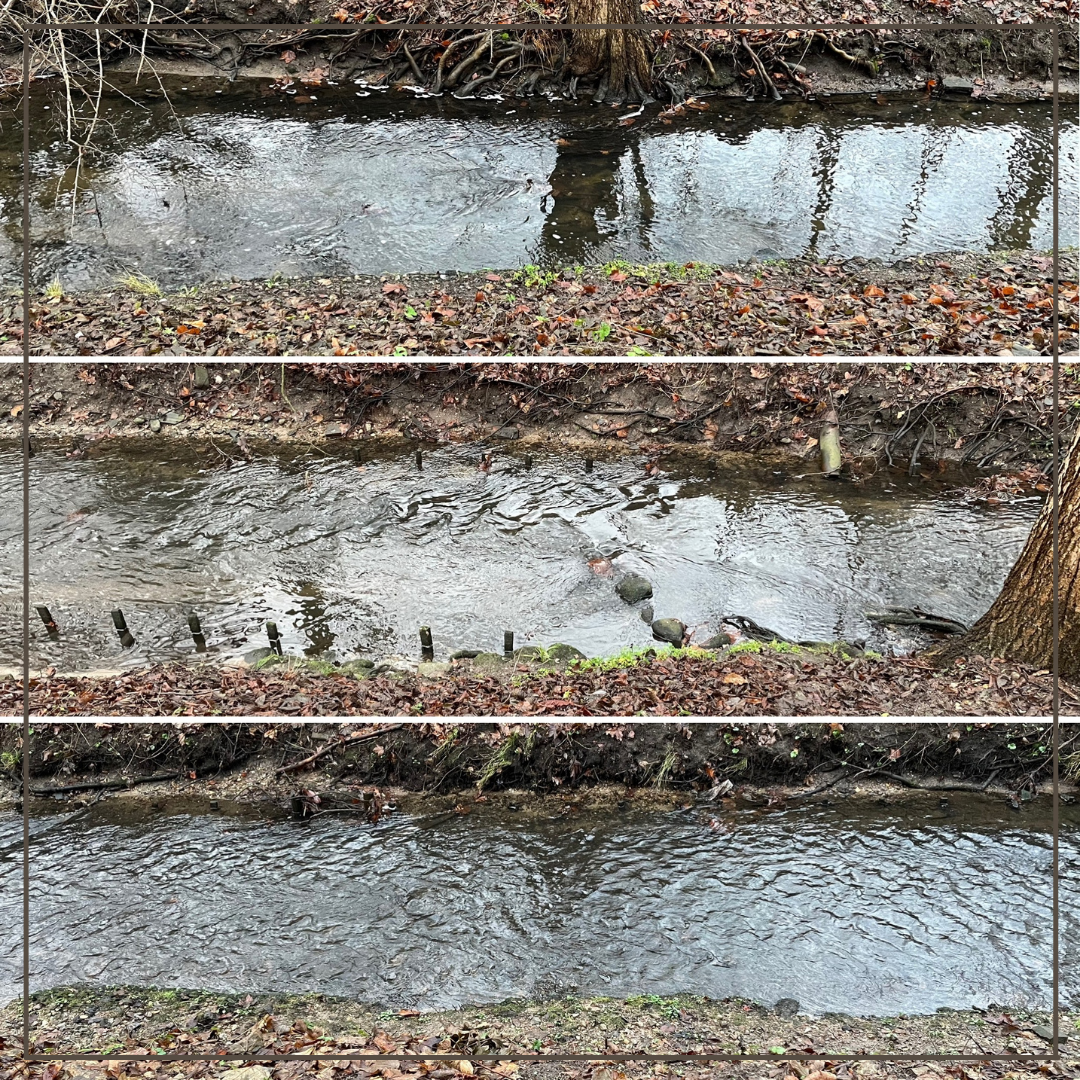 More different current flavours! Again, all currents from right to left.⠀ ⠀ Top panel: Flow is fast but not very much influenced by the river bed. Notable exceptions are the roots of the tree that you see prominently in the reflection (see how a wedge of standing waves develops from there on downstreams) and the rock in the center of the flow just left of the reflected tree that creates a V-shaped wake downstream.⠀ ⠀ Middle panel: More disturbances here! The current is squeezed together by those rocks and starting from where it is thinnest and in downstream direction, there are standing waves caused by the thinning and thus acceleration.⠀ ⠀ Bottom panel: No obvious obstacles (except possibly one in the center of the flow, a bit left from the middle of the panel; you see a wake with fewer waves than on the rest of the flow downstream from there), but a river bed that is uneven enough to support all those waves over the whole stretch of the river captured in this pic. 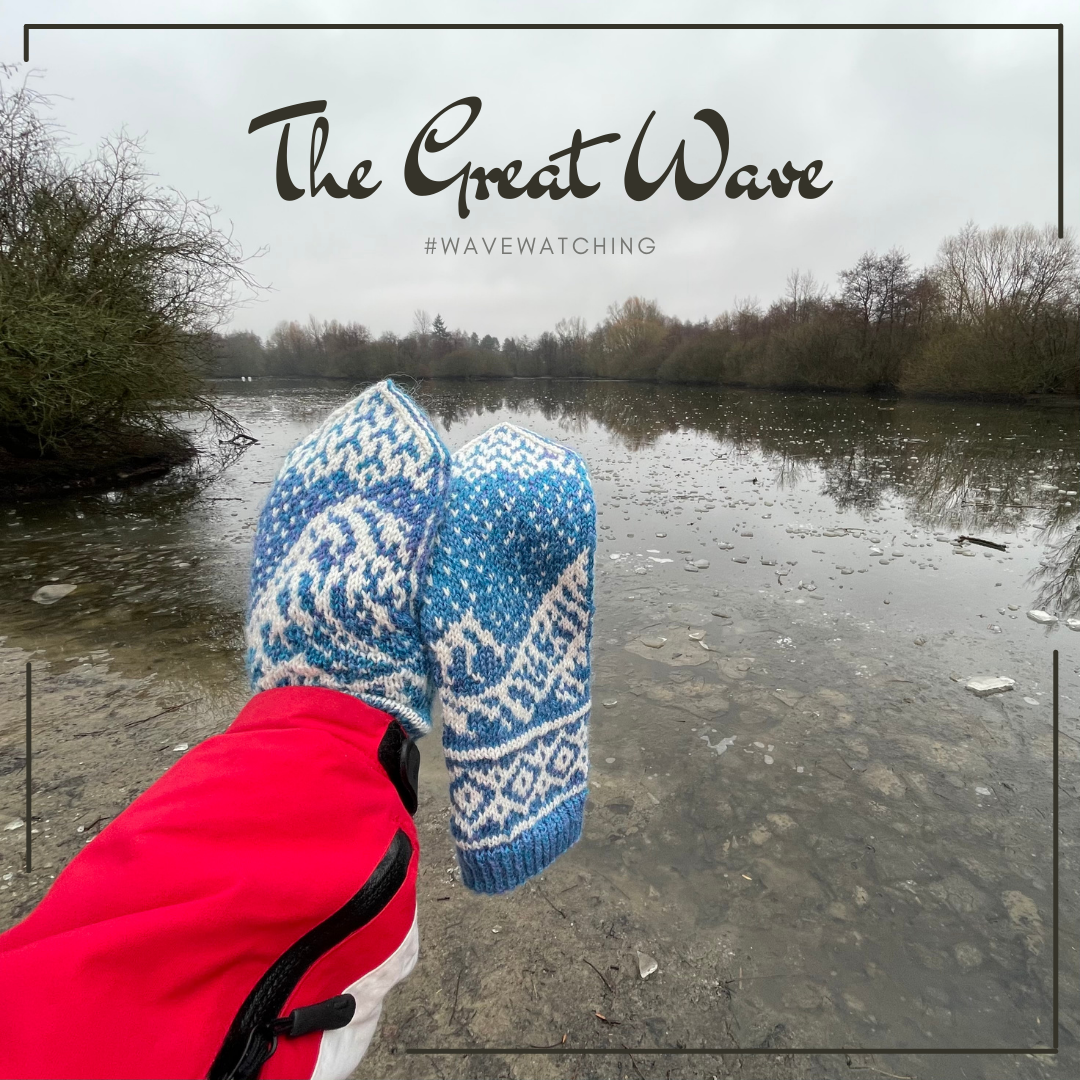 No waves? No problem! With my beautiful new mittens I always have the #GreatWaveOffKanagawa with me to admire, whenever regular wave watching isn’t as exciting. Thank you so much Kjersti, they make me sooo happy! :) 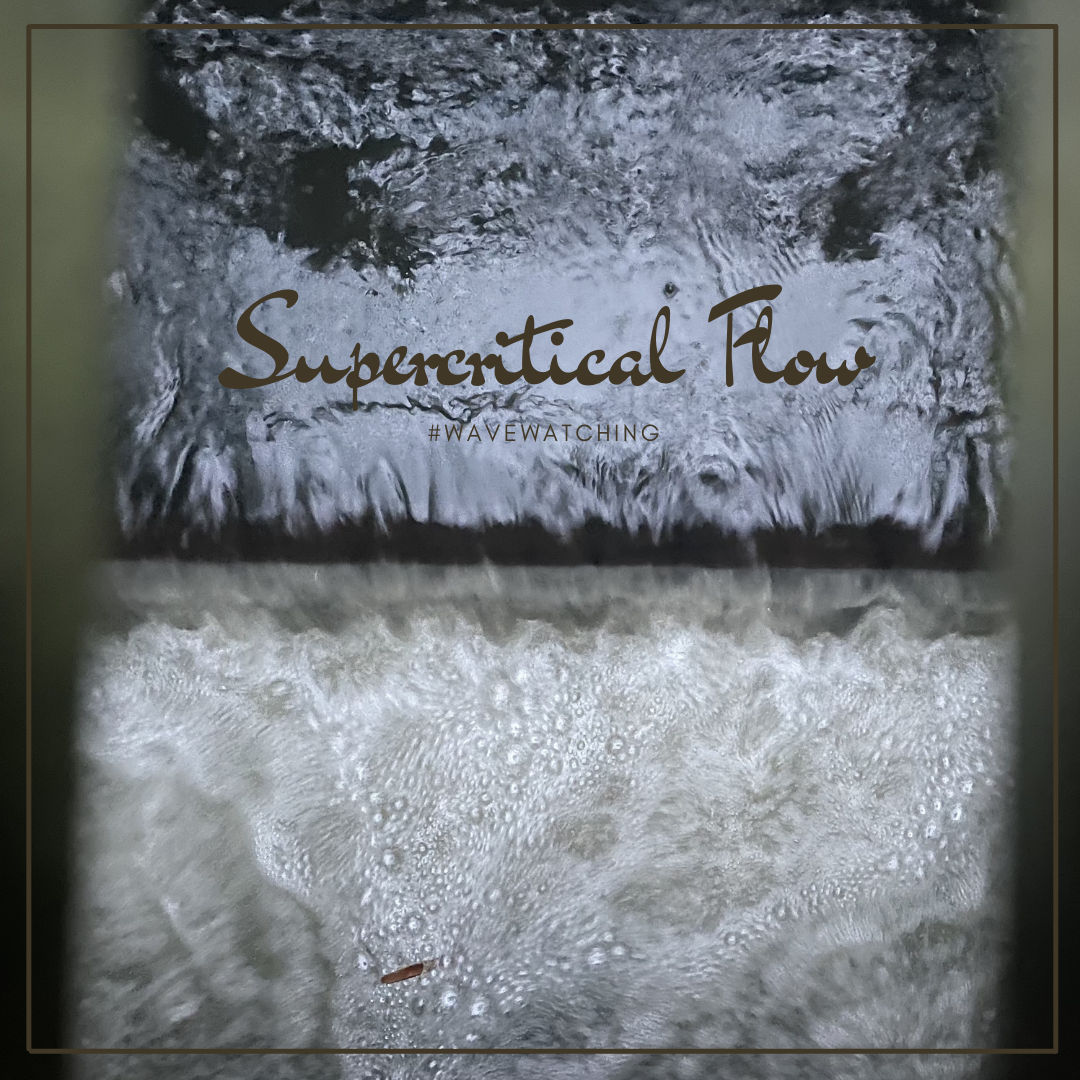 Whenever I pass this weir, there are people standing close by, fishing. But by now they’ve gotten used to me kneeling down, taking pictures of the water through the grid :-D I love watching waterfalls like this one, because I find it so fascinating how the flow changes. Upstream, towards the top of the picture, the water is flowing towards the weir, but it’s flowing slow enough that waves can propagate in all directions. But right below where it says “supercritical flow” in the pic, the flow changes — to supercritical. Meaning that it is flowing (“shooting”) faster than waves can propagate, so all waves just get flushed down the water fall. And then, somewhere submerged all the bubbles, is a hydraulic jump, where the water has slowed down enough again that it stops being a supercritical flow. And then there is the turbulent bubbly part… Very much worth kneeling on a metal grid & being stared at by fisherpeople for! :-)