Another summary post of my wave watching Insta @fascinocean_kiel! Enjoy!

What is going on in the picture below? Just from looking at the picture I could only guess, but luckily I took dozens of pictures of that location with slightly different angles and at different times, so I could figure it out!

To the right of this picture, there is a groyne. Some of the higher waves, like the one whose crest is perpendicular to the beach (looking like it’s wiping out all the smaller waves) make it over that groyne. Most don’t, so they get bent around the groyne and approach the beach with crests more or less parallel to the beach, like we would generally expect waves to behave. And there you have it: a really weird-looking wave field! 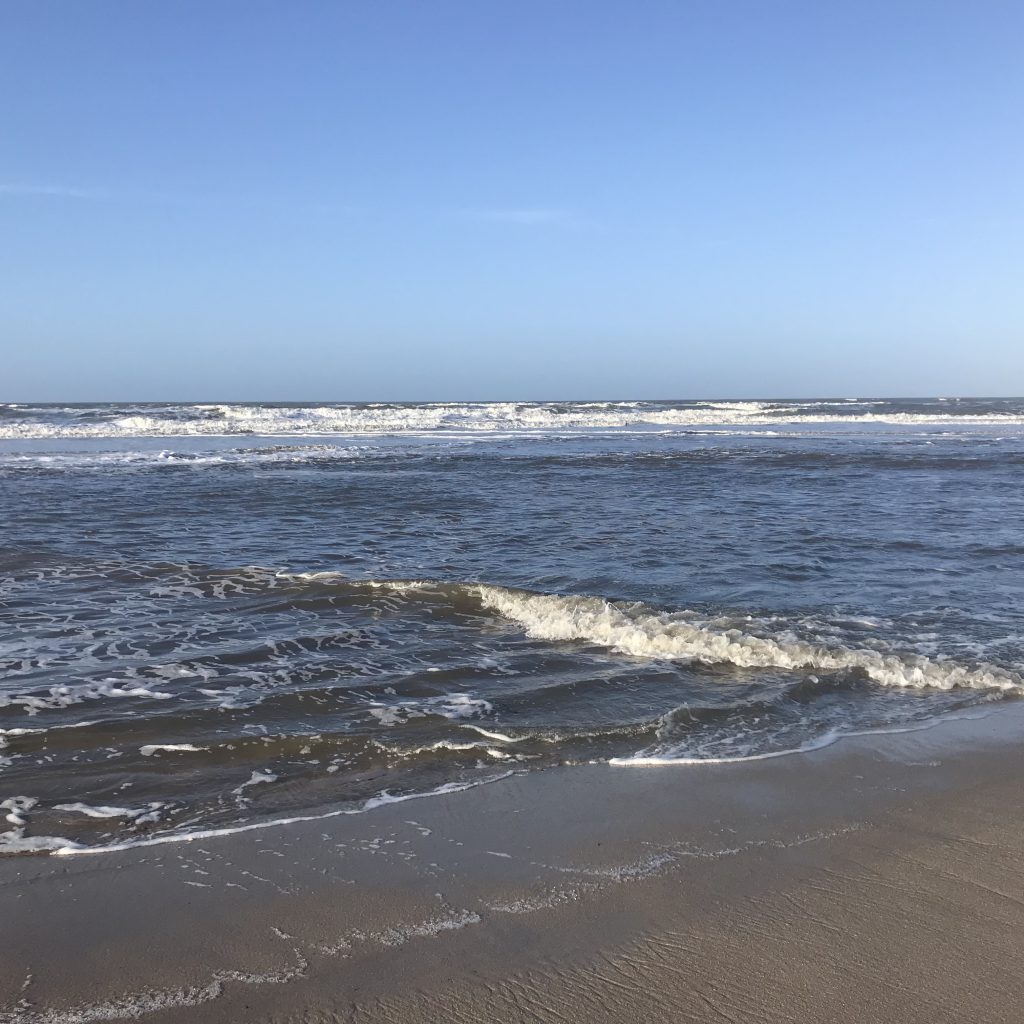 It’s so fascinating to observe water interact with obstacles, not only because of what waves are created (although that’s definitely awesome!) but also because of what water does to things that try to stop it.

Take for example groynes, those structures that are built into the sea perpendicularly to the beach. Their purpose is to regulate beach erosion by breaking up the current along the shore and creating pockets of calmer water where sand falls out and accumulates on the beach rather than being taken downstream with a current. There are many different kinds of groynes for different purposes. Those that always stick out of the water or those that are submerged, those that are completely closed off and those that let a little water and sediment through. And I find it so interesting to look at structures and ponder why specific design choices were made. 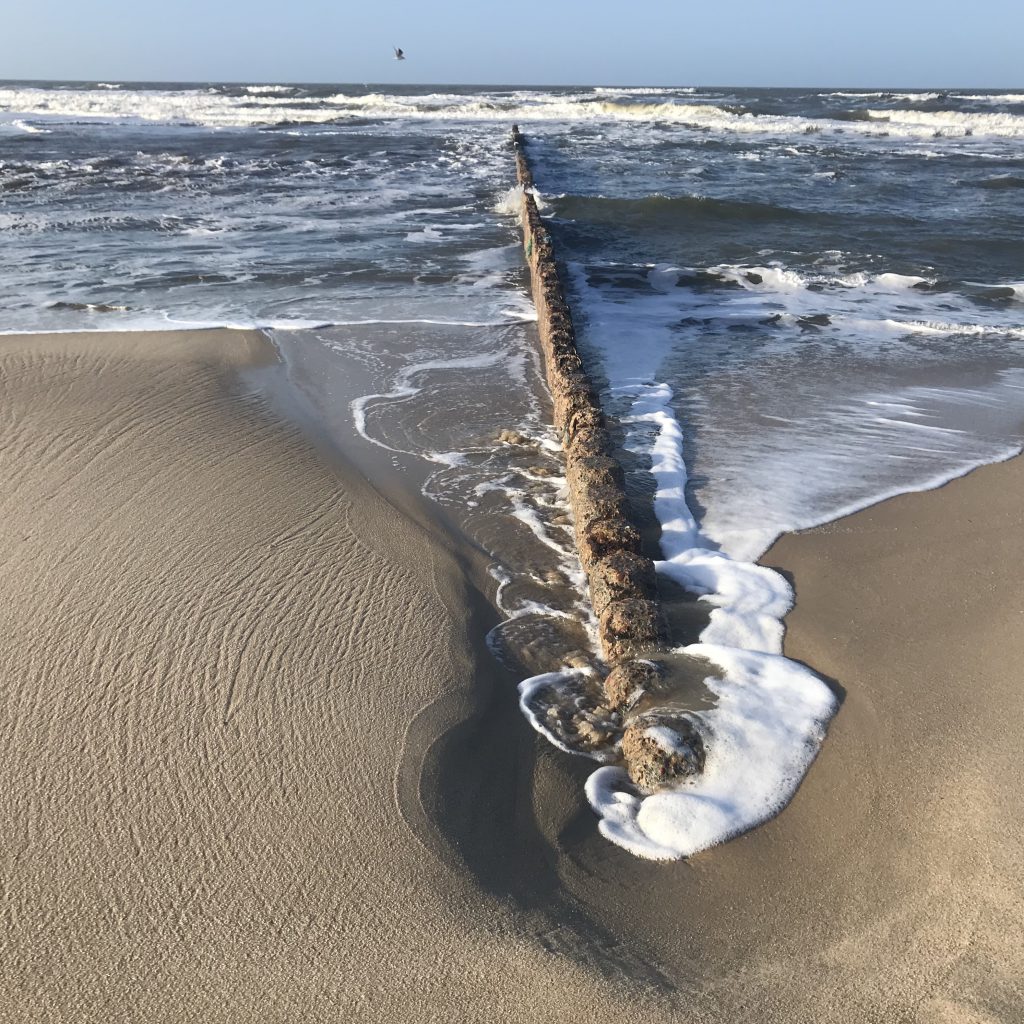 In this picture, the groyne is old and either eroded or was designed for a coastal shape that has changed since: high waves manage to flow around the landward end of the groyne, eroding the beach there. Looks cool, but not so cool for coastal protection… 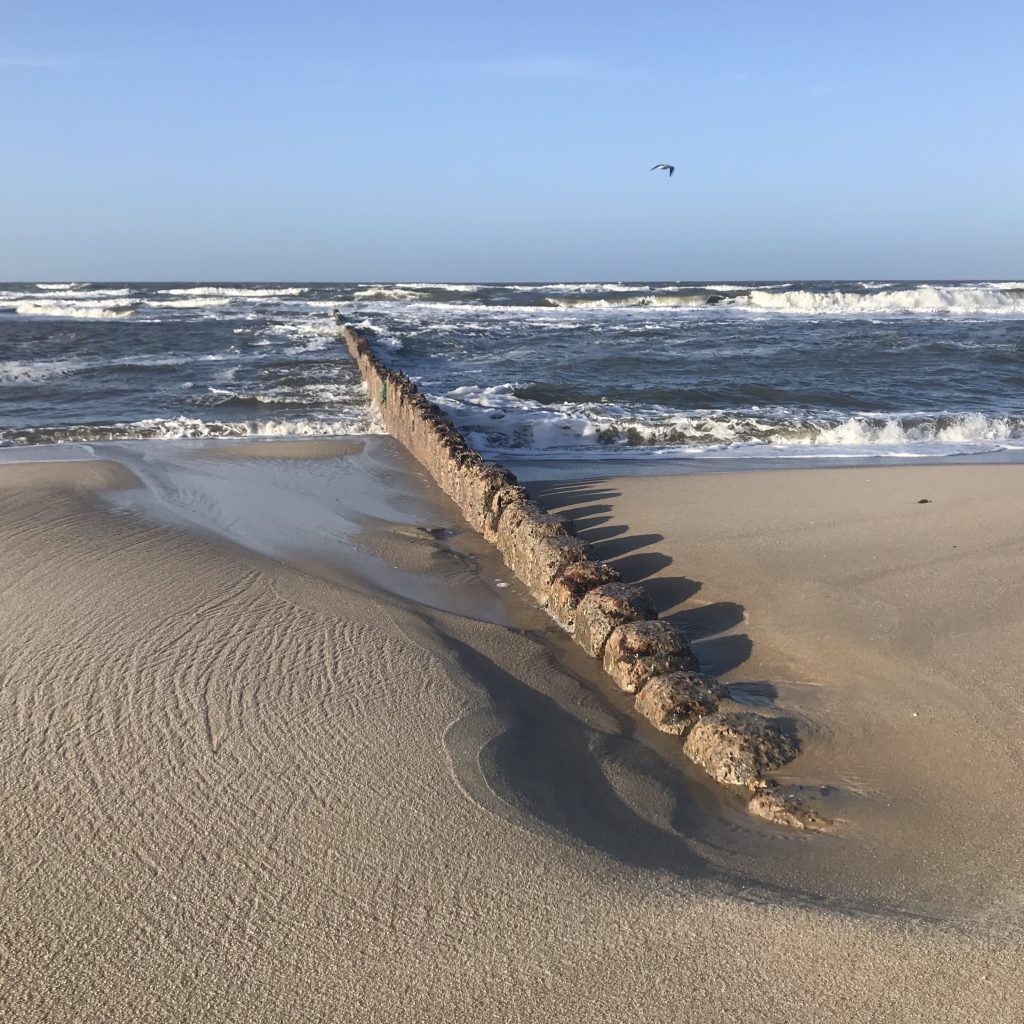 But it makes it even more interesting to come back to that beach soon to see how things develop: very close by old groynes were being pulled out of the sand as we walked past, so there will very likely new coastal protection measures in place next time I visit! What do you think what they will look like? 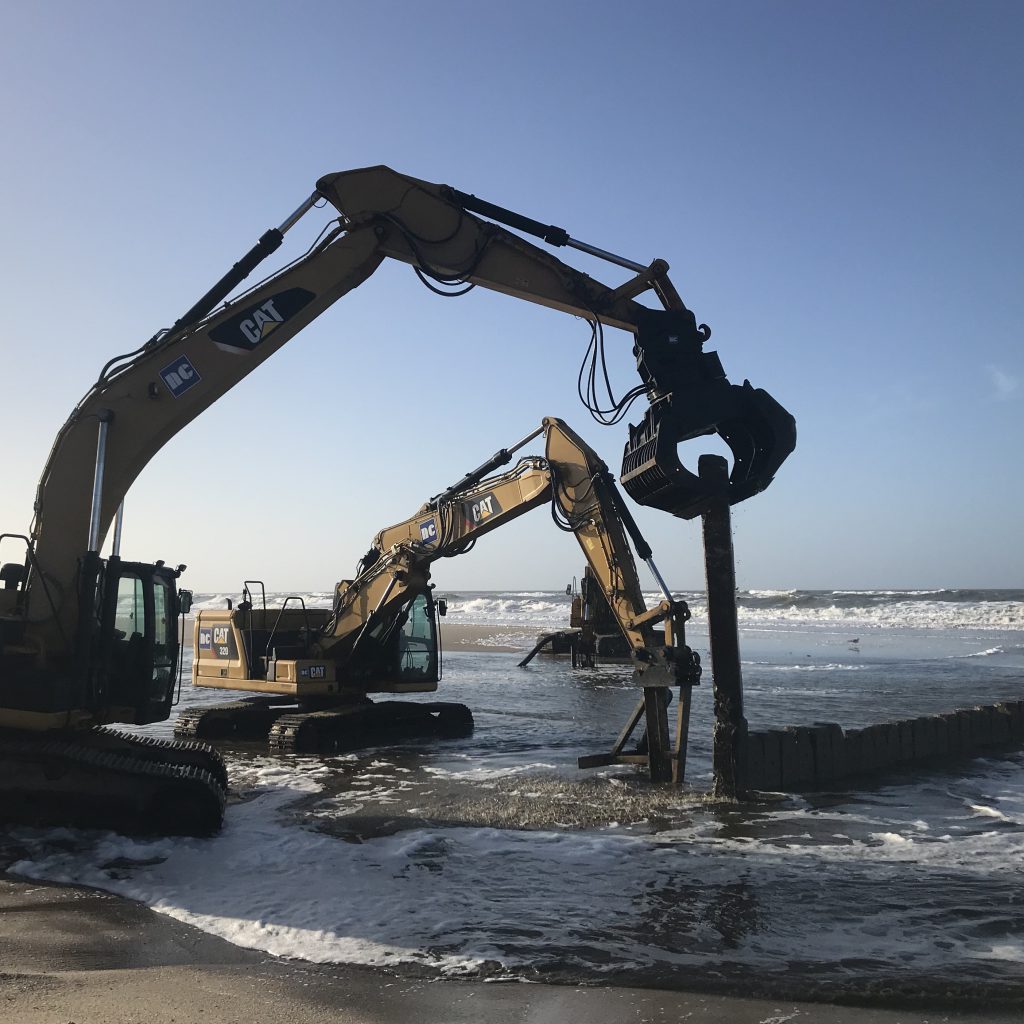 Next, I went to the trade fair “BOOT” in Düsseldorf for a long weekend. Super exciting! Here are my posts from that huuuuge trade fair on water sports:

#WaveWatching of a different kind these days thanks to @deutschemeeresstiftung and #loveyourocean: #TheWave at #BootDüsseldorf2020. I have to make time to talk to one of their technicians who are surely around… (Edit: In the end I didn’t manage to track one down. I saw where they were sitting, but there were too many layers of security between them and me…) 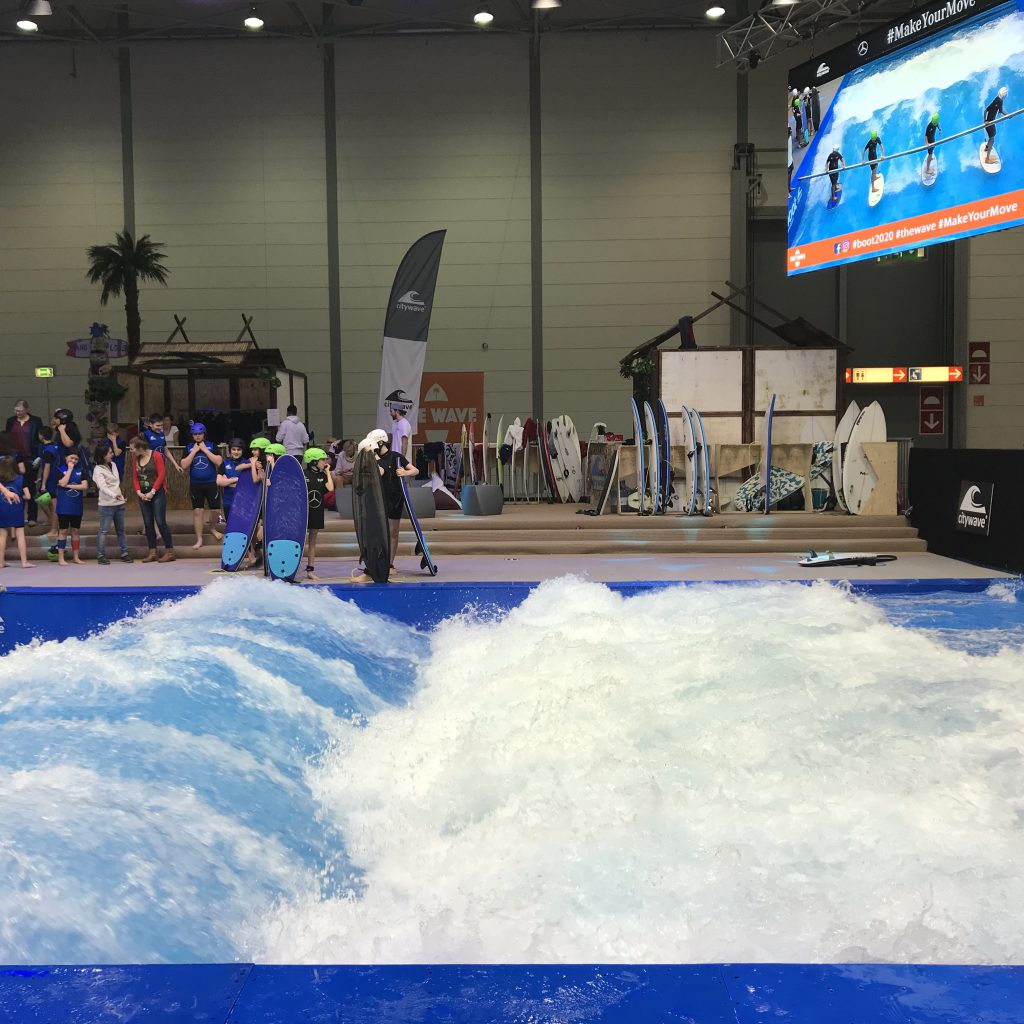 Then: hotel breakfast #WaveWatching.
Here is how you do it: take a latte glass (the glass, not a glass of latte. That would obviously work, too, but I have posted about that soo often by now that it isn’t as exciting any more ;-)), two coffee crema and then pour a little milk in. Voila: diffusive layers form! That’s a really nice example of double-diffusive mixing where heat and milk diffuse at different rates. And if you disturb the stratification, for example by moving the glas, you get internal waves! 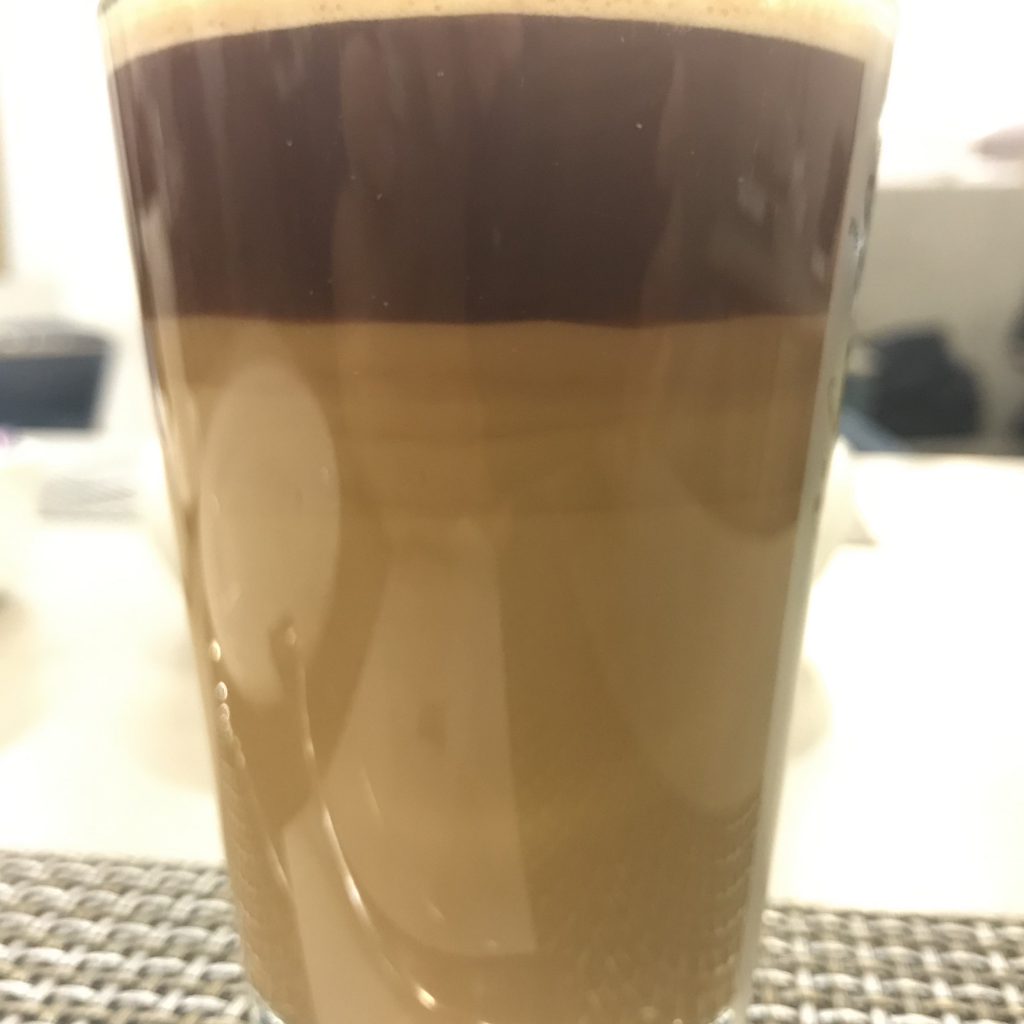 Fascinating how different people have such different perspectives on water.
Mine today was one I am not very familiar with: mainly through microscopes, trying to adjust them in such a way that visitors at the #loveyourocean booth of @deutschemeeresstiftung could get a good look at plankton. This would then lead the conversation to food webs, microplastics, and more. Very different from my usual topics, but definitely fun!
Also: taking pictures with your phone through a microscope is a lot more difficult than you would imagine! 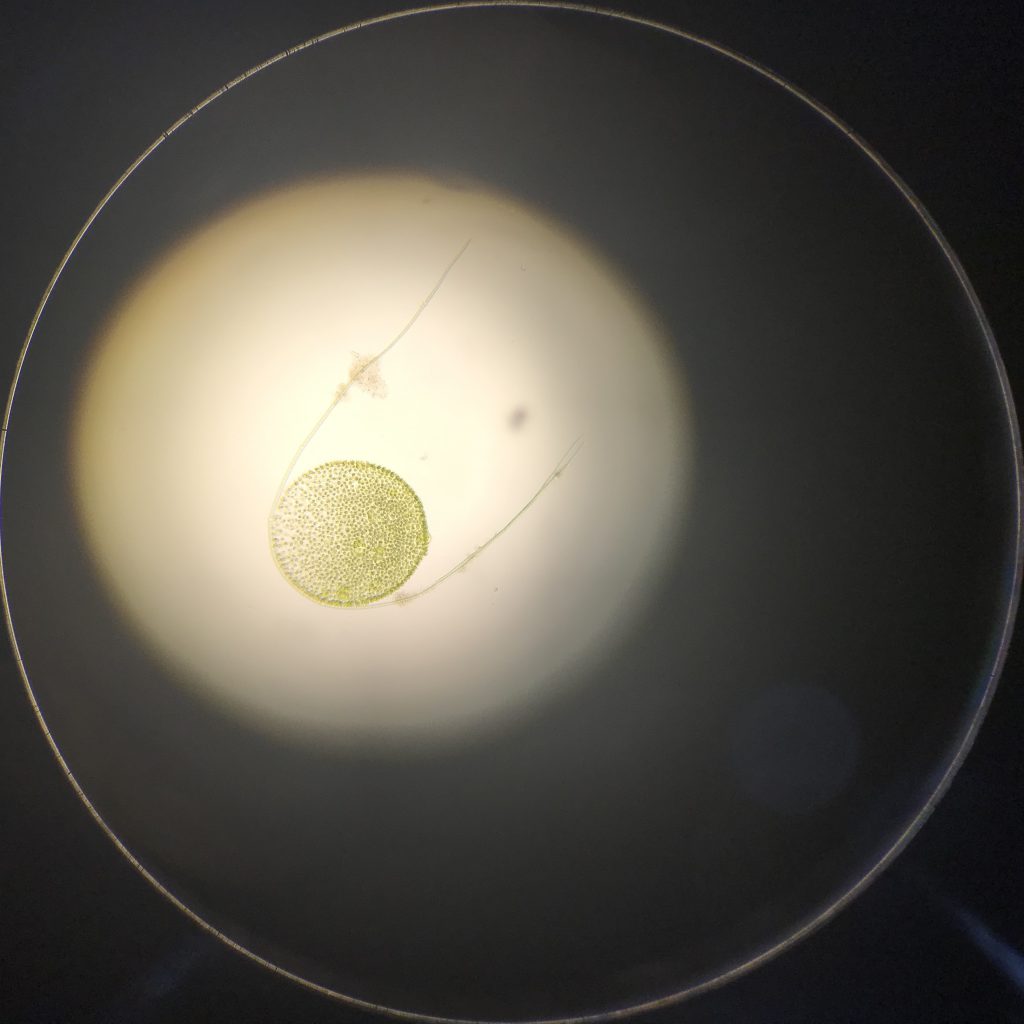 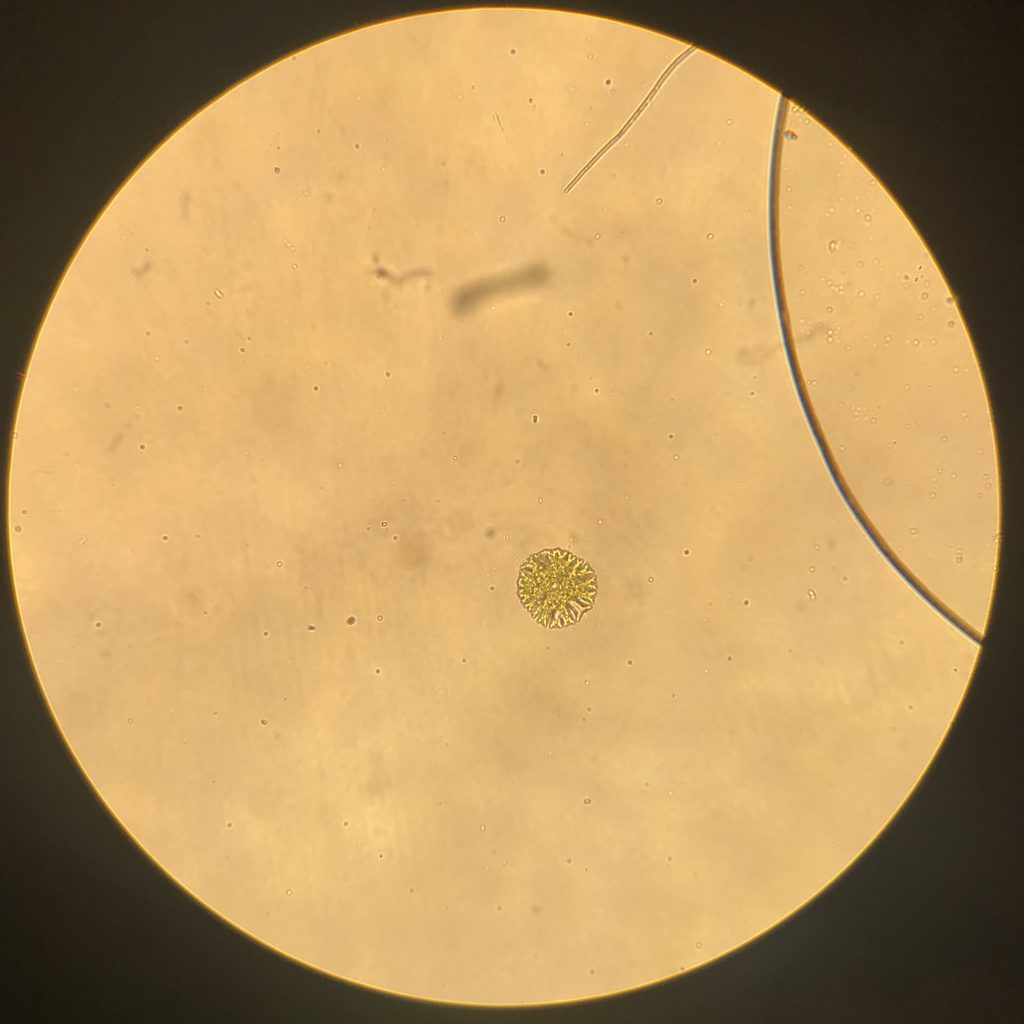 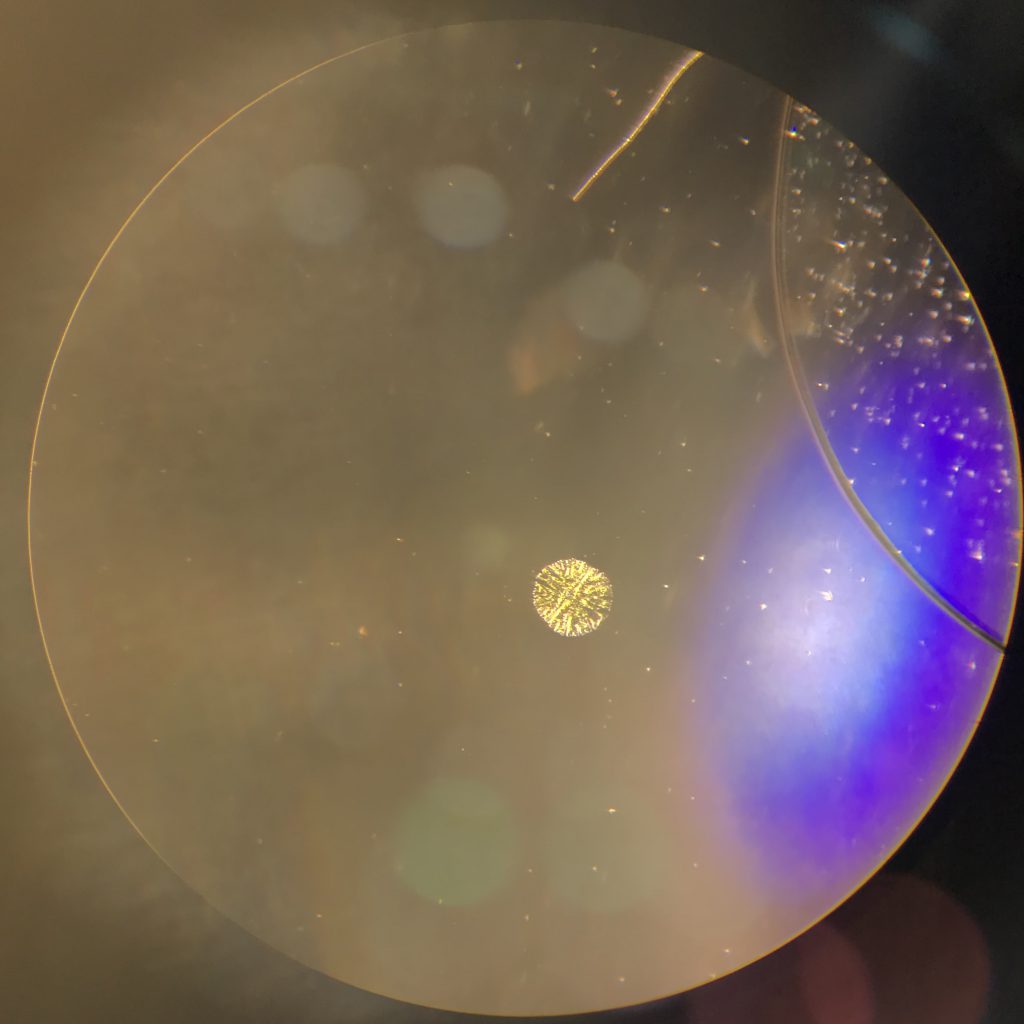 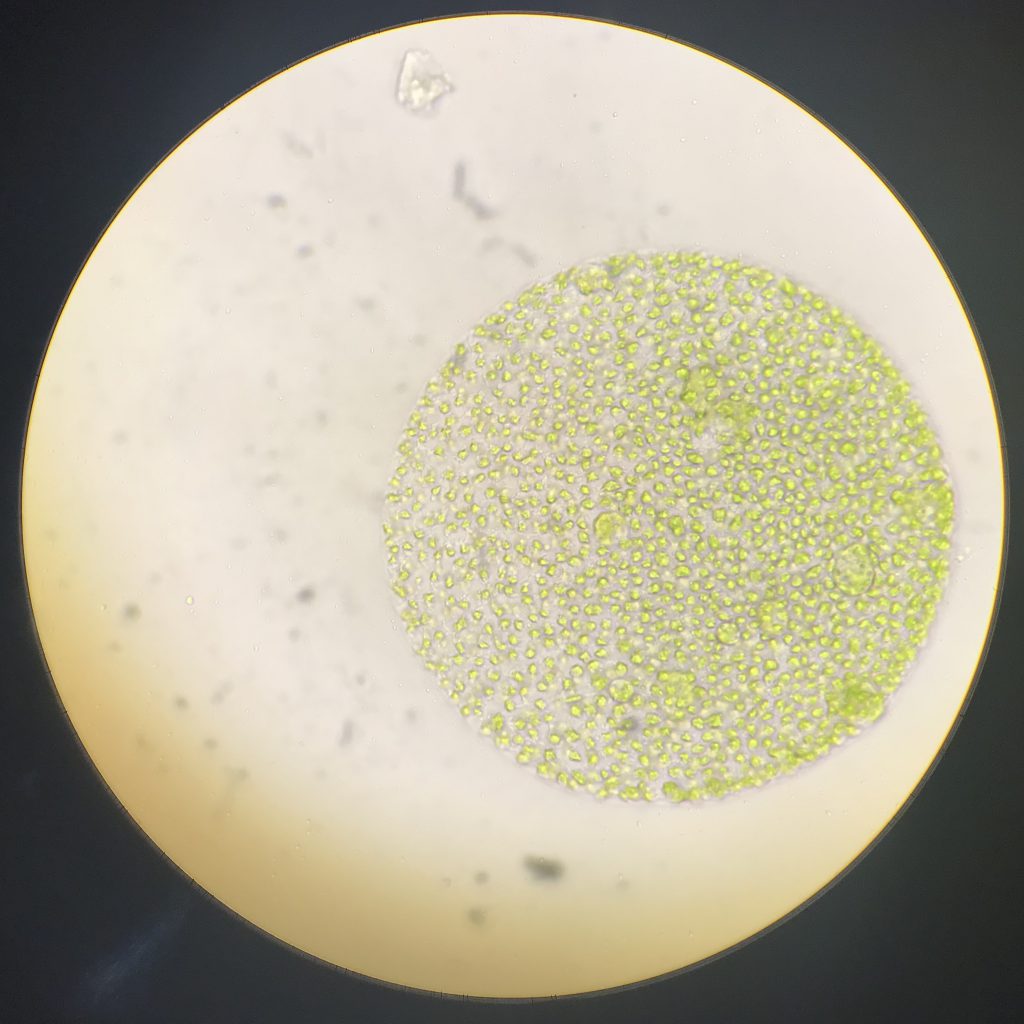 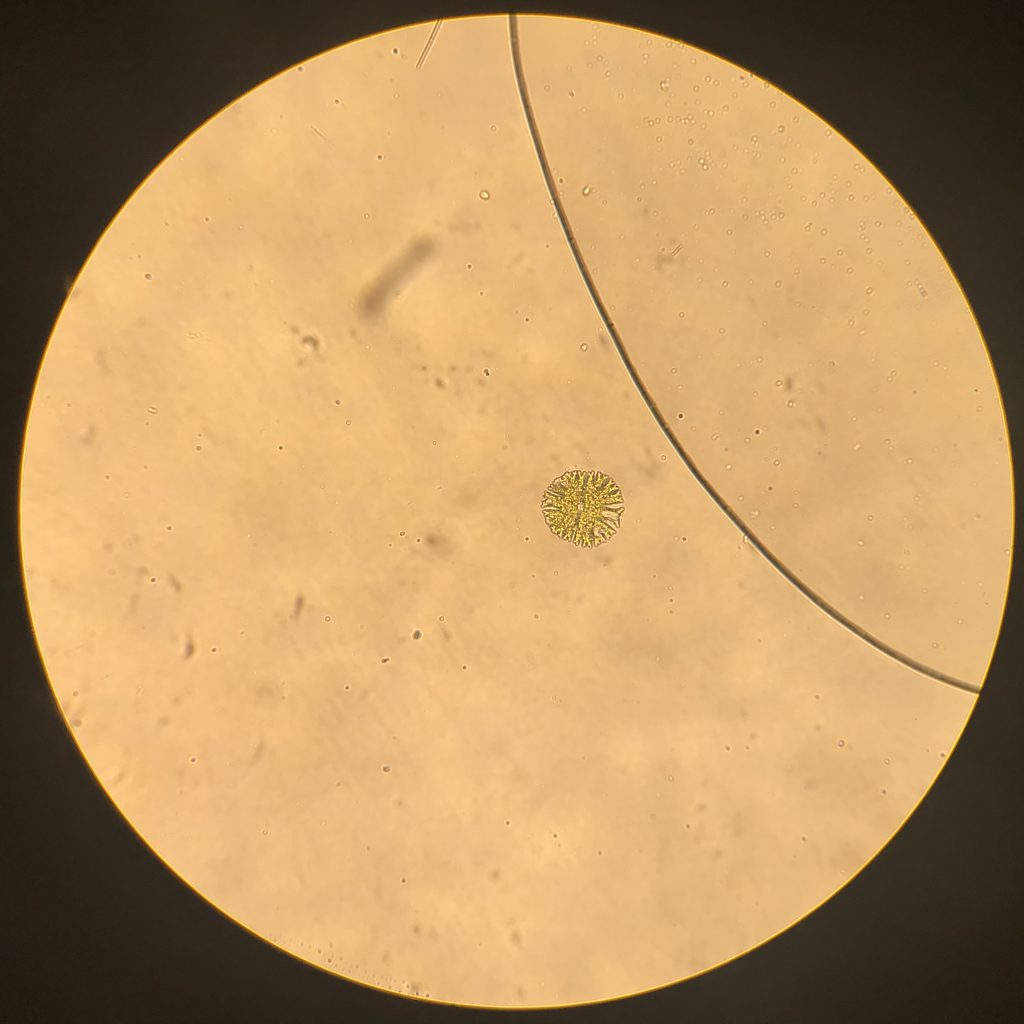 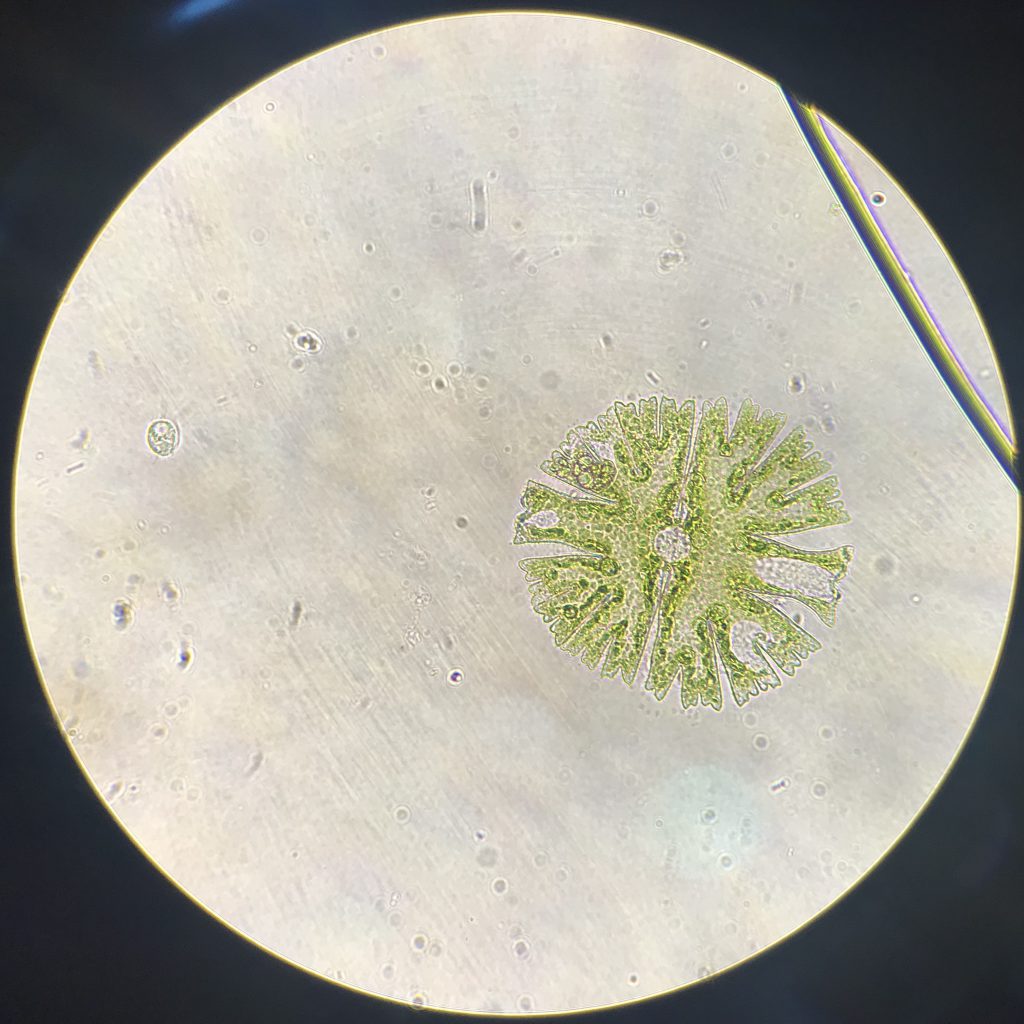 (Yes, I know there are microscopes that take proper pictures…. But where is the fun in that?!)

Pretty impressed by the effort people at #bootdusseldorf2020 put into creating fun environments to try different water sports. Indoor pools with wind machines, live grass and bushes and stuff! And also impressive how different the moods are in different areas of the congress center. Pity it’s already over for me! 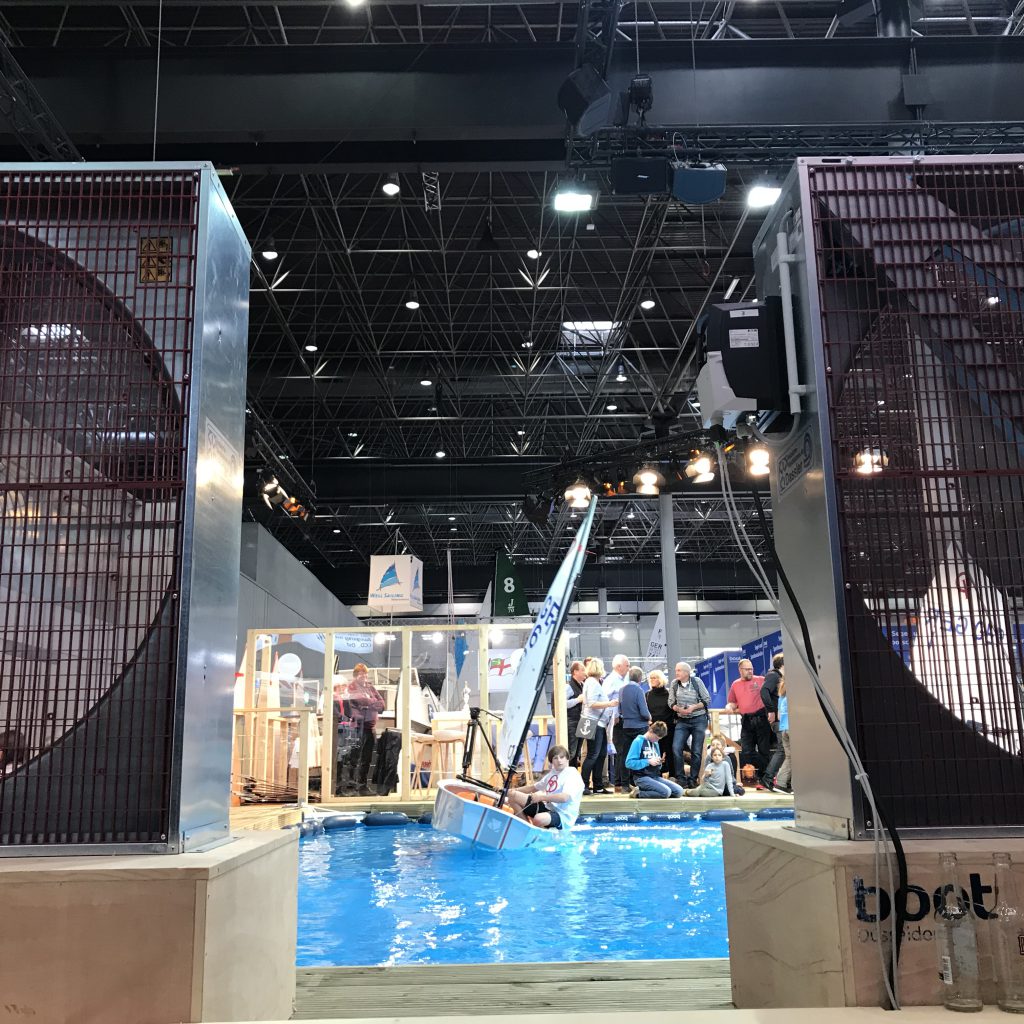 Also super awesome: the THW‘s rescue divers. And how air bubbles rapidly increase in volume as they rise to the surface :D 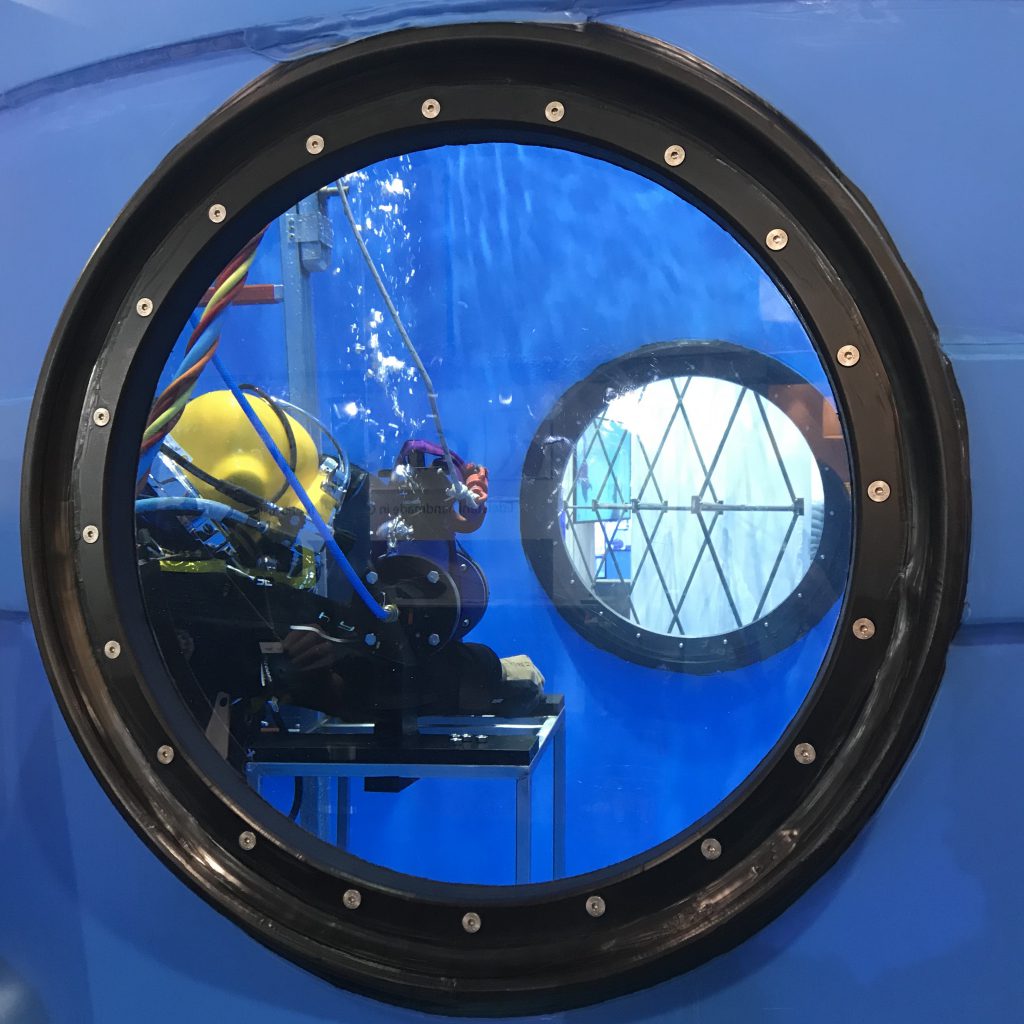 For this month’s #SciCommChall, I show you the contents of my trusty handbag. You see it in the picture here and in my profile picture. Wherever I go, it goes. And there are surprisingly many things in there that I carry with me for my #SciComm! Check out the blogpost! 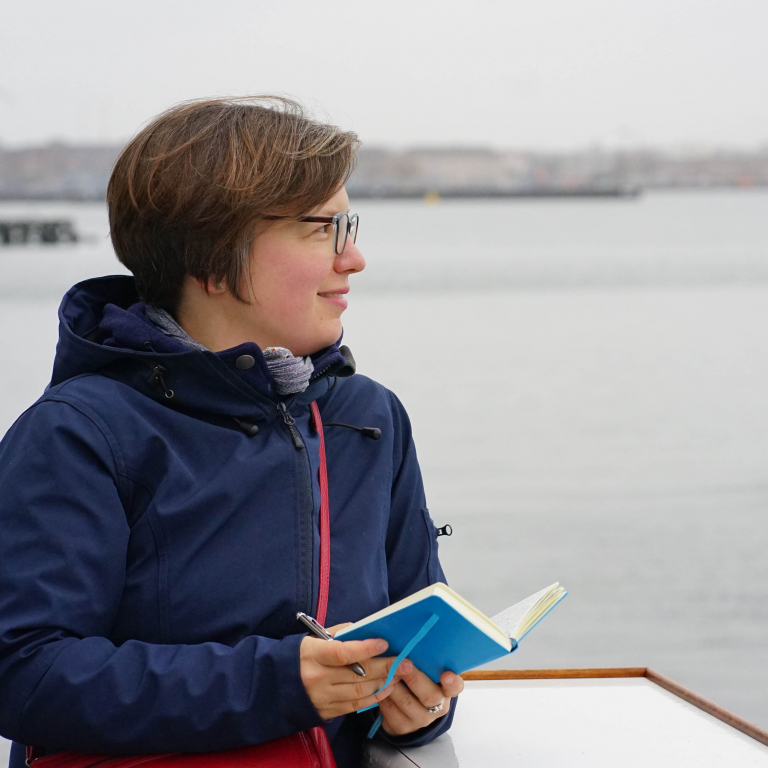 Not really wave watching, but close enough: the light installation on this church’s steeple shows how low the cloud cover was two nights ago. Looks very cool, me thinks! Even cooler than on clear nights where you don’t get the projection on the clouds and the light just disappears into space (or wherever) 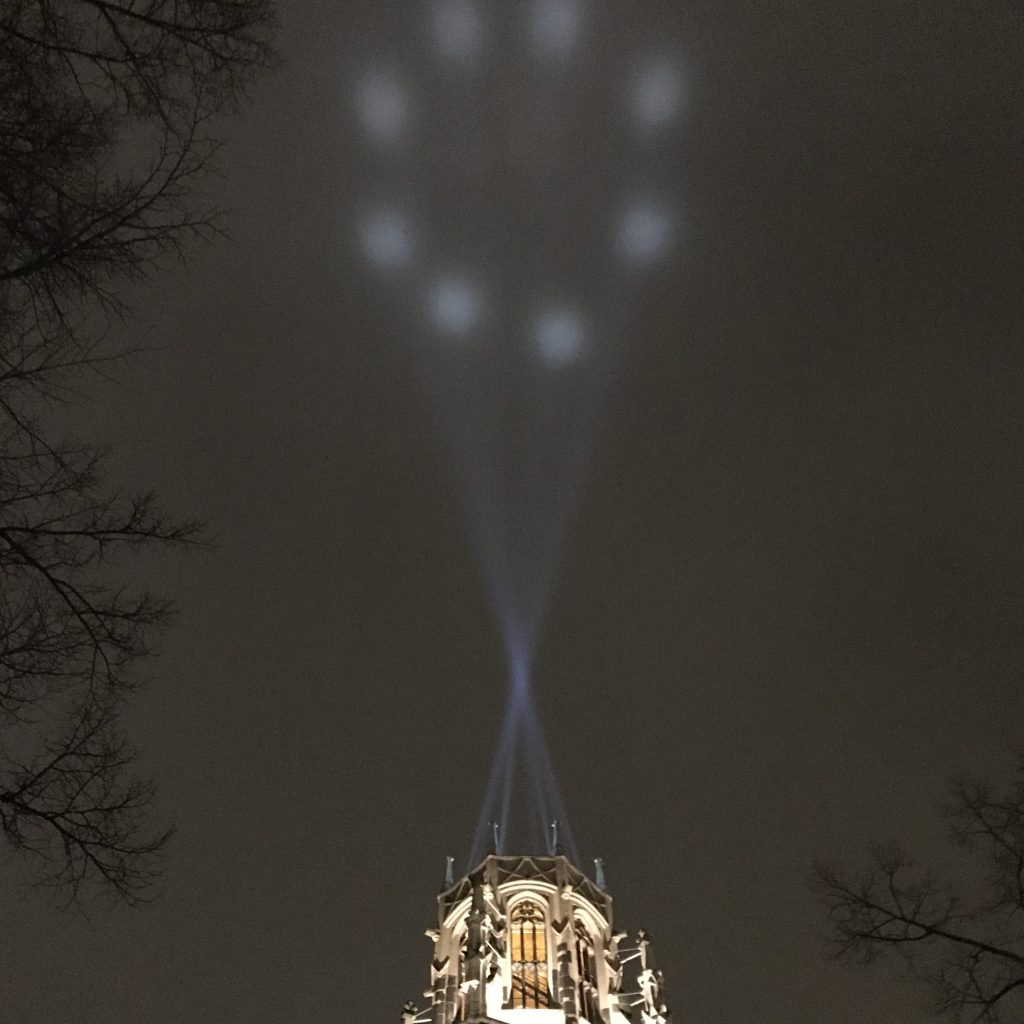 Yay! A little #WaveWatching on my way to a meeting in Berlin. Can you see which direction the waves are coming from? Check out how the ring waves are traveling from the buoy! 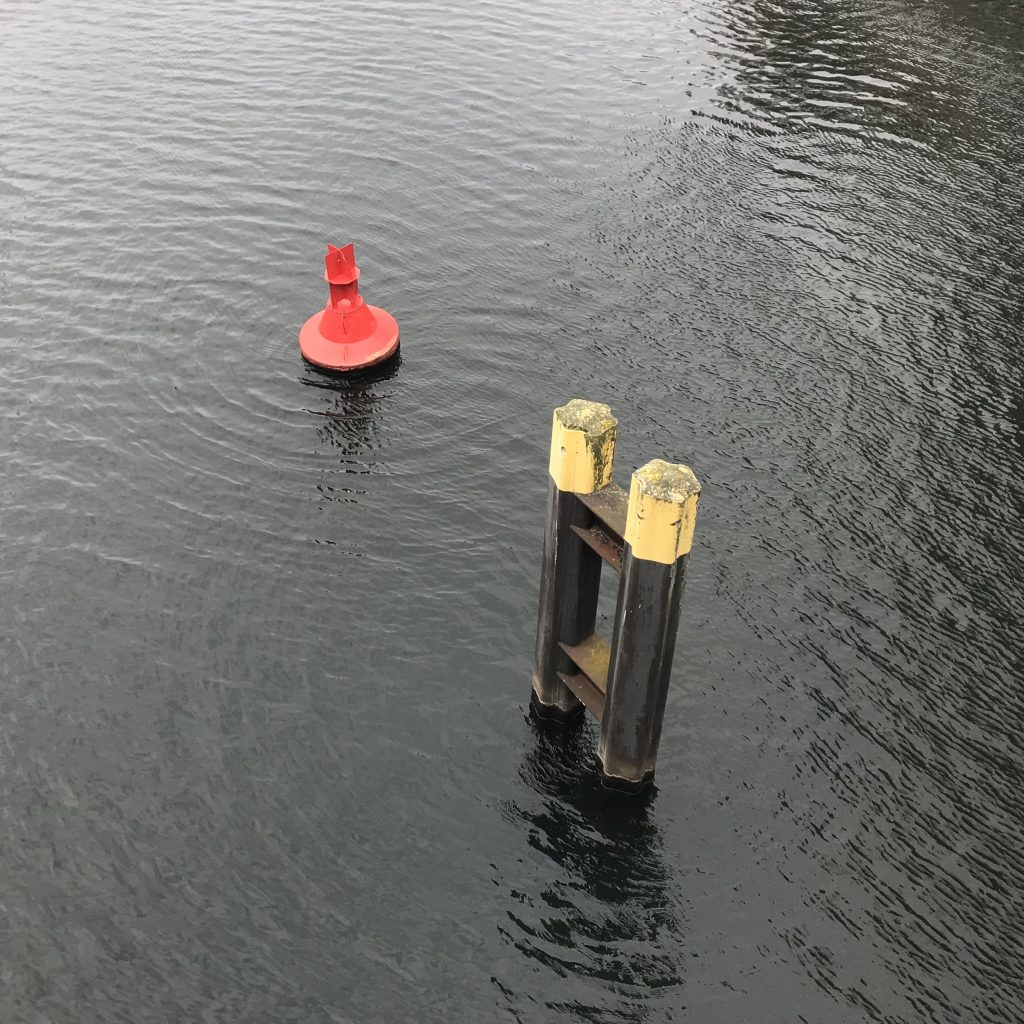 On a work trip, combining scouting locations of interest in terms of #biodiversity with (surprise!) #wavewatching. Luckily the duckies were cooperating and making interesting waves in their feeding frenzy. I especially love the splashing as the jump up and down the stone edge of the pond! 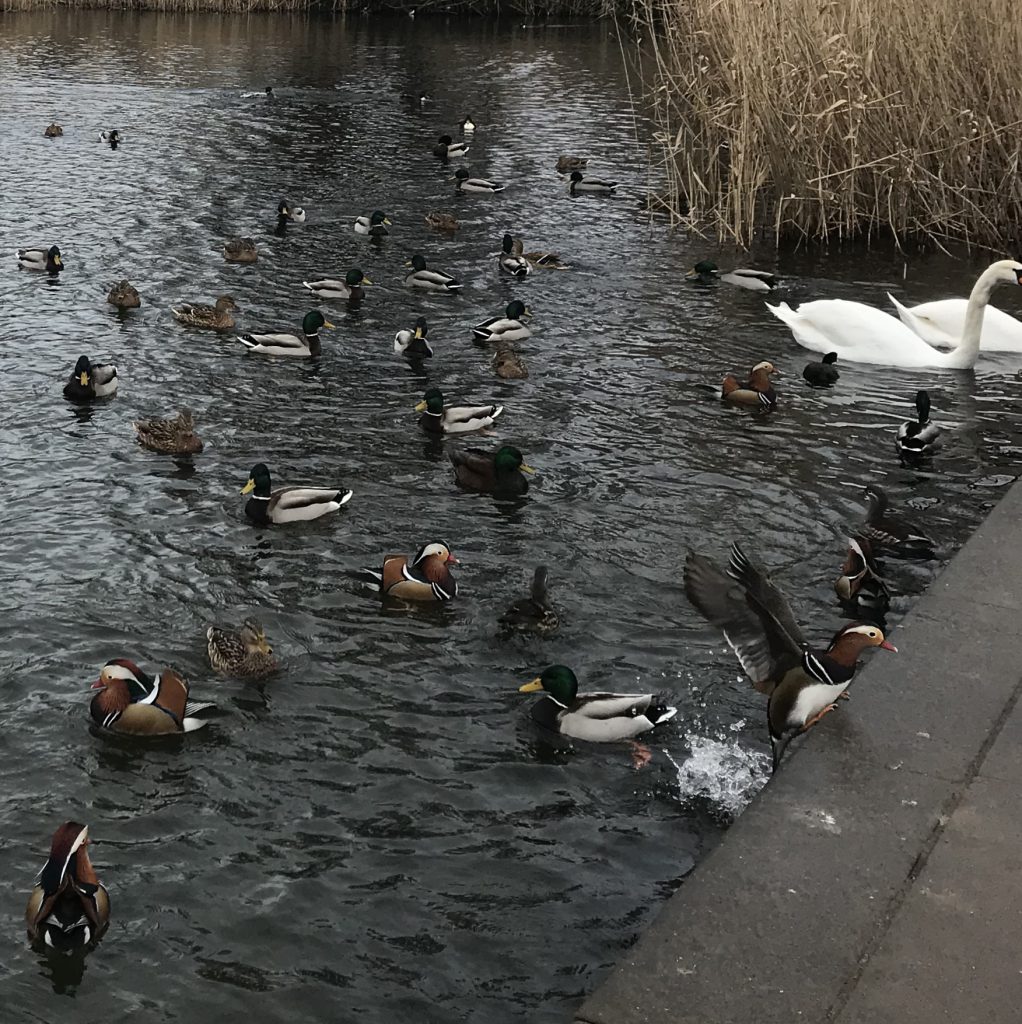 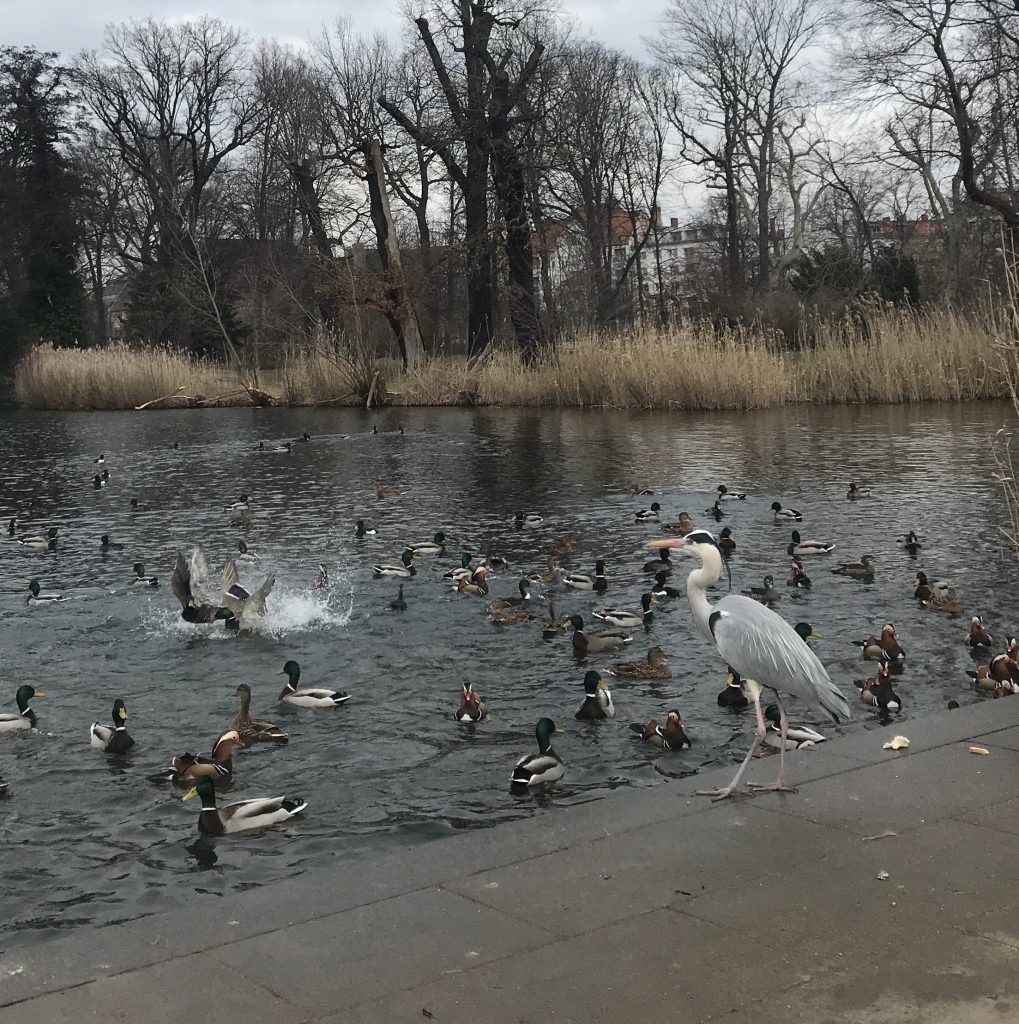 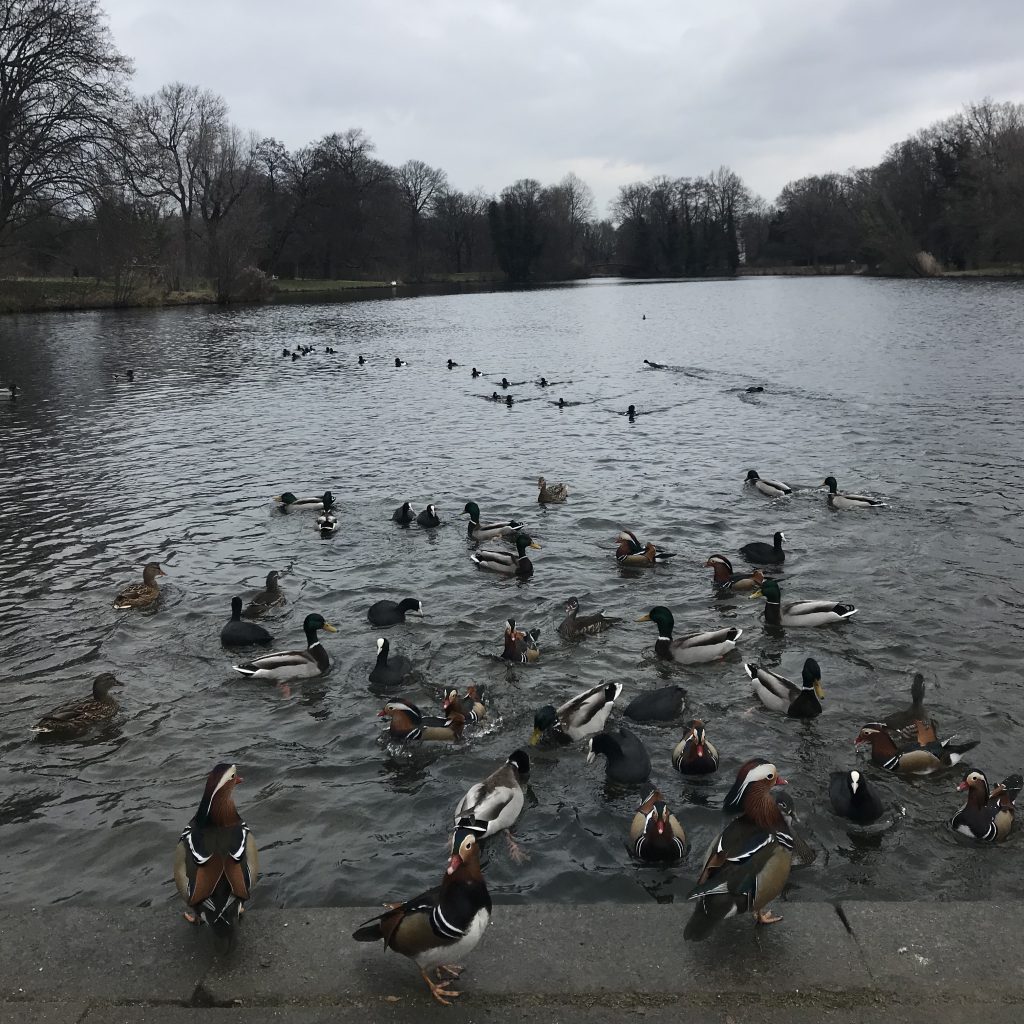 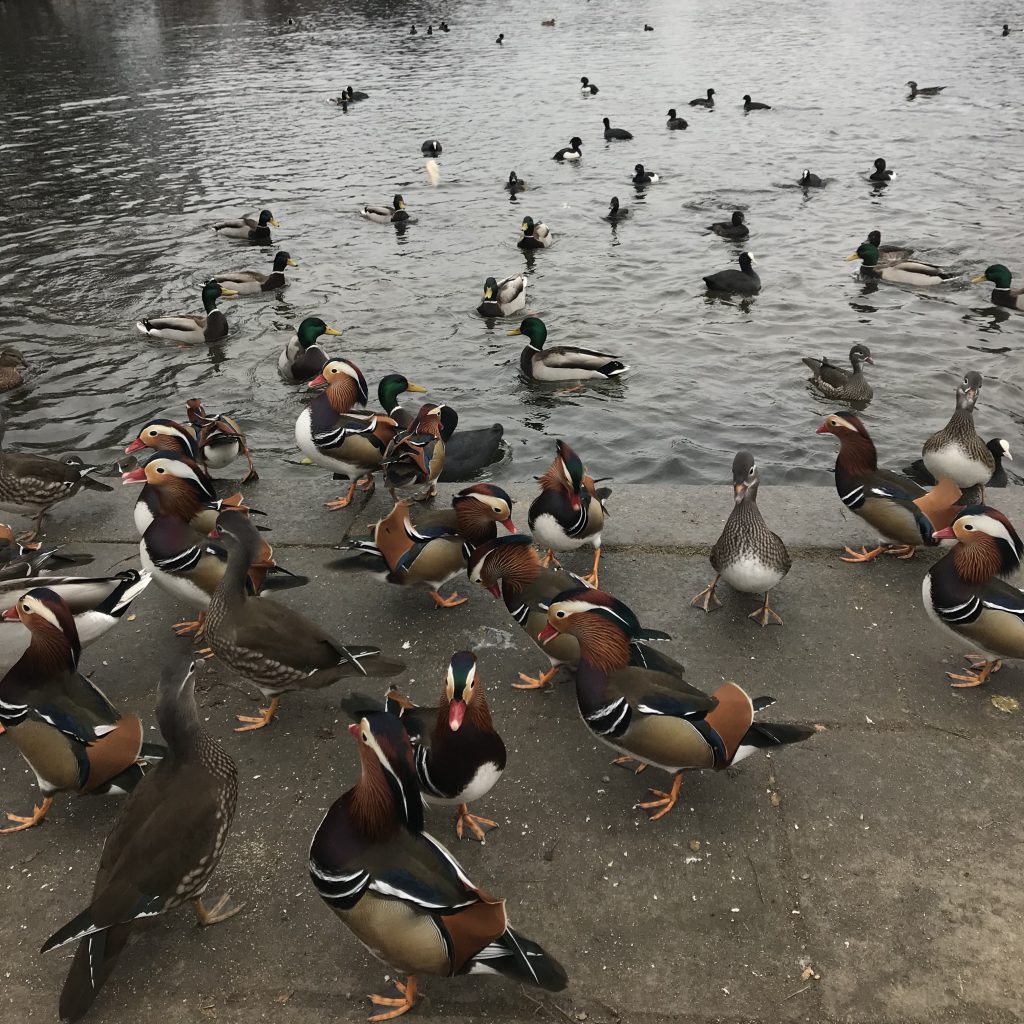 I think these ducks are so pretty! Remind me of a tiny figurine I owned as a child and that — I remember that vividly — had a glued-on part where something had broken off when it fell down…

And that’s it for this week’s #WaveWatchingWednesday! See you next Wednesday! :-)