Here are the most recent #WaveWatching posts I posted on my Instagram @fascinocean_kiel. Enjoy! 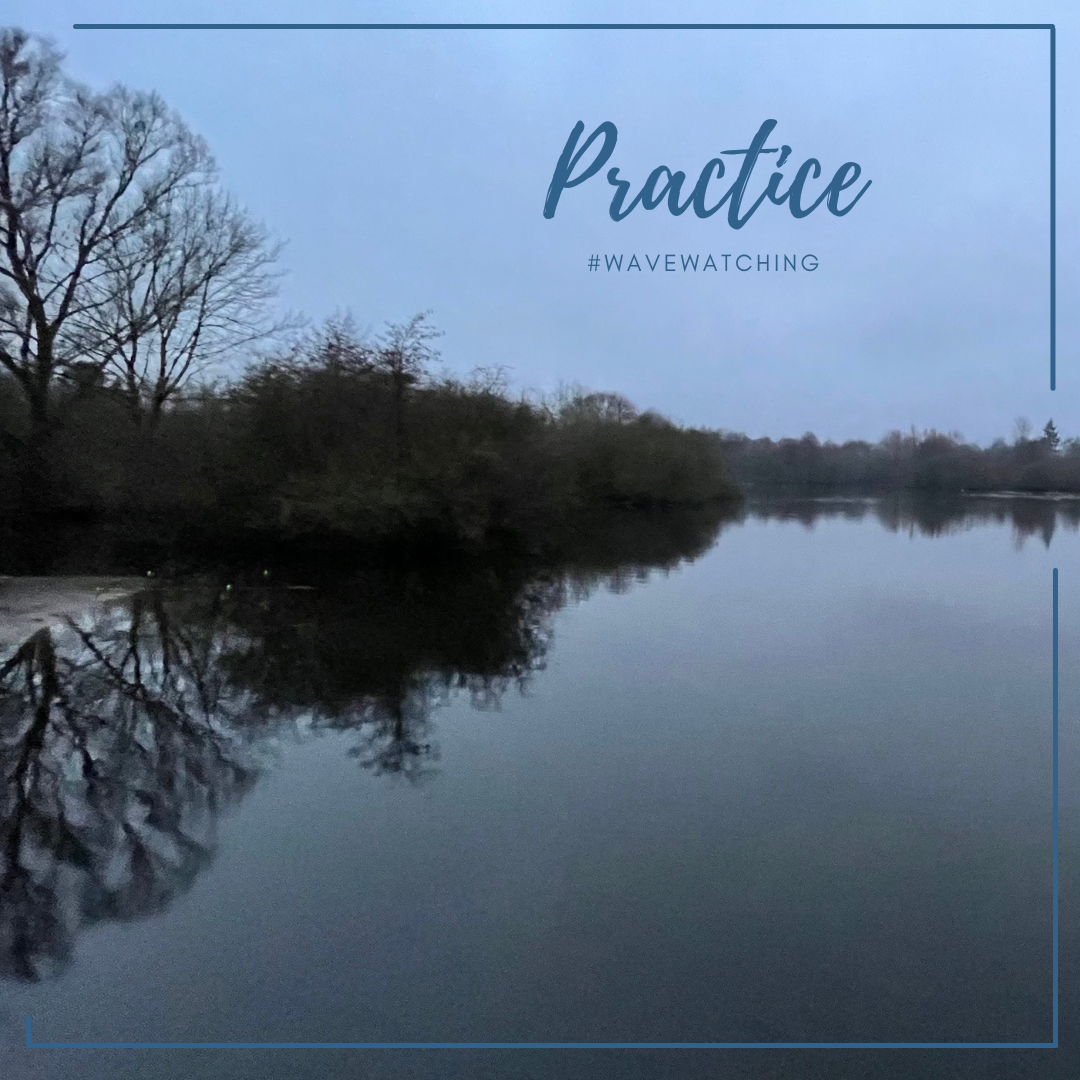 Recently, most mornings have been grey, and #WaveWatching at the little lake isn’t super exciting, as you might have noticed from the pictures I have been posting. But why do I still go wave watching every day and take pictures of what looks very similar day in, day out? For me, it comes down to practice, in two meanings of the word: 1. Practice as in the repeated exercise that we do to acquire a skill. I’ve spent a good amount of time looking at water over the years, and I have developed a good intuition in recognizing pattern that let me explain why a water surface is shaped a certain way at any given time. This is a fun skill to practice and to hone! As is taking pictures of water. Not so easy if you want to primarily make features of the water surface visible, not photograph the landscape or sunset or what have you! 2. Practice as a habit or custom. Going wave watching has, over time, become meaningful in itself. I really enjoy looking at water, spotting phenomena I recognize, chewing on those that I can’t immediately explain. Doing this as a treat throughout my day that I look forward to — at the end of a run, during lunch break on a hectic day — gives me calm and joy, and I consciously incorporate it every single day. . Do you know what I mean? What is the “wave watching” in your life?

A natural weir: An obstacle across this little stream that alters both flow and water level. Very nicely visible here by the calm surface upstream of the weir (where floaty stuff is accumulating on the surface over time in stripes) and then the wavy water downstream of the weir where the water just went down a small waterfall. 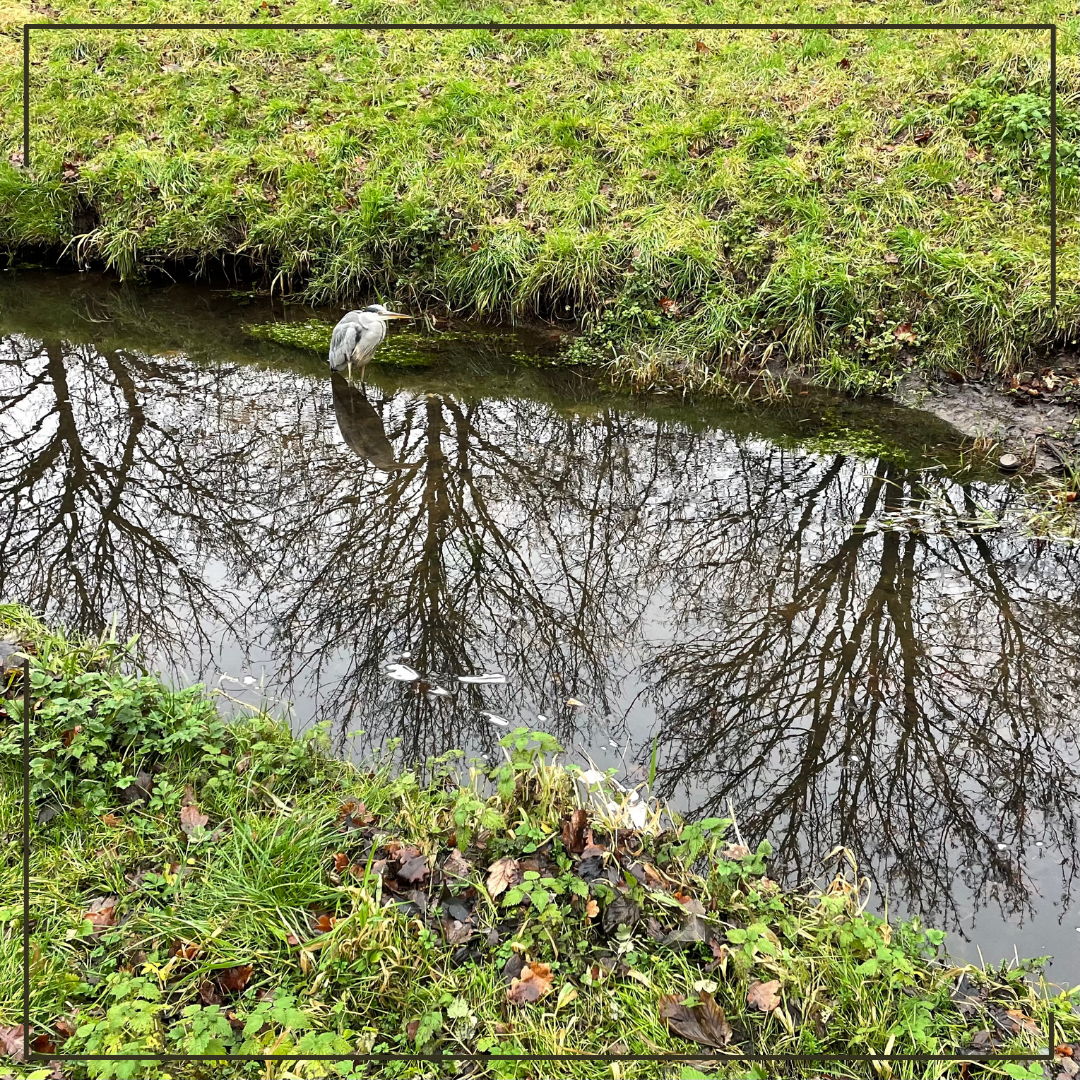 Sometimes it’s surprising how much #biodiversity can be found within walking distance in the middle of a city like #Hamburg. What you don’t see (because I artfully cropped the picture) is how close this #heron was to a busy road. Discovering nature right outside our doors is really awesome, even on the last day of my vacation before I’m back in a job that is about exactly this! :) 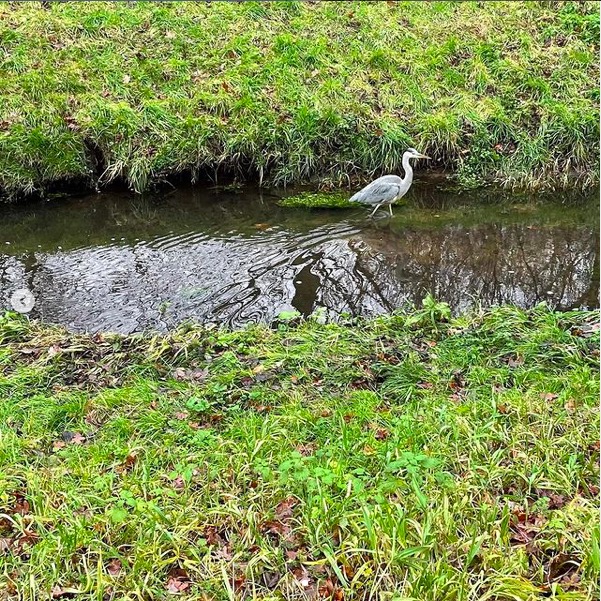 …and it does get even more awesome: when it starts moving and making waves… ;)

Ecological restauration of storm drains and small streams in the middle of the city is awesome. Saw a kingfisher and could follow it along for a bit! Plus it makes for interesting #WaveWatching when the current is following a slalom path. Love the standing waves in the current and how one can observe the different properties of the flow on the inner and outer banks! 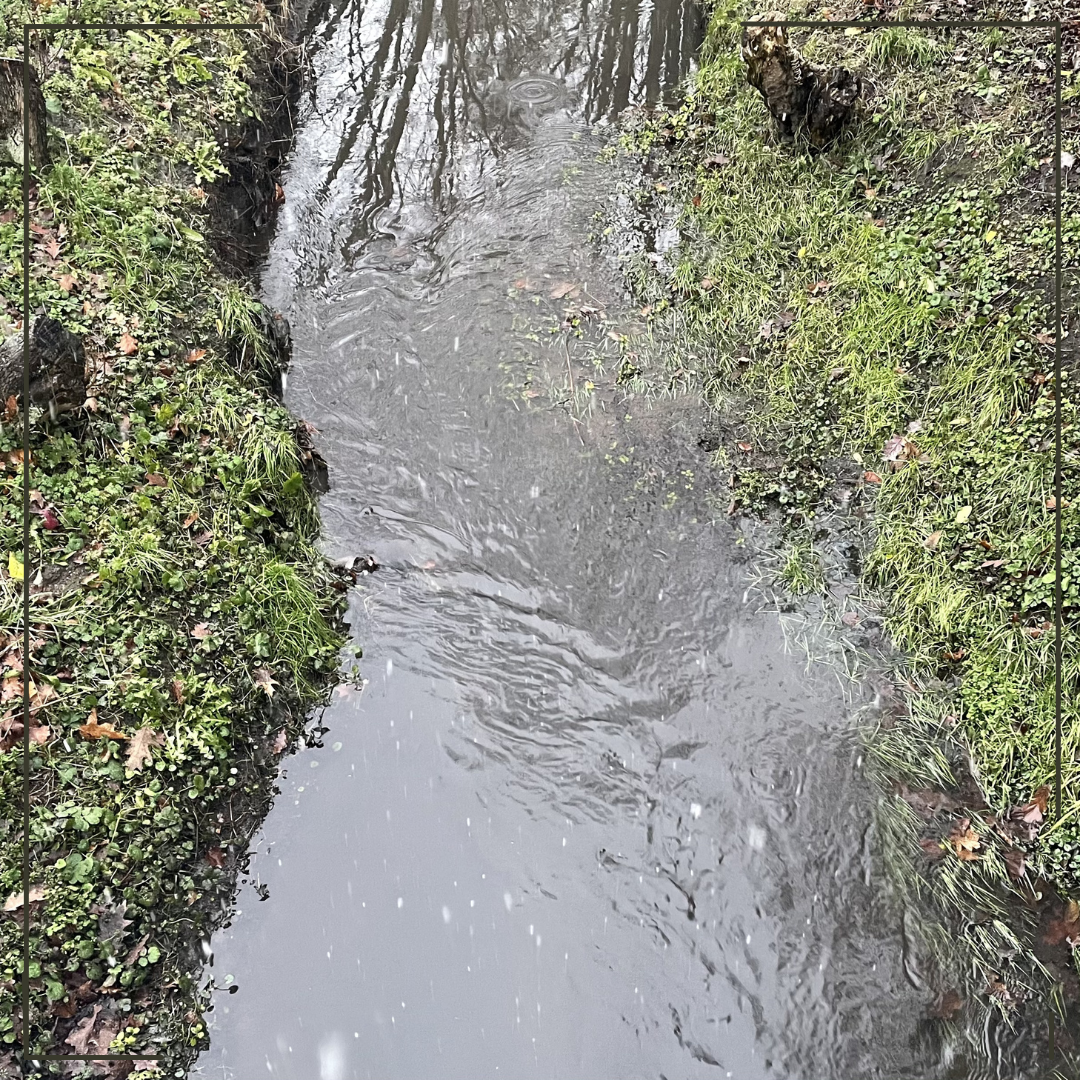 Wow, such a pretty braided pattern in this little stream, where the main part of the current gets moved around the headland (submerged, but you still see some grass being brushed in downstream direction) and then back towards the other side of the stream after it met the opposite bank. I think this looks really cool!⁠⠀ 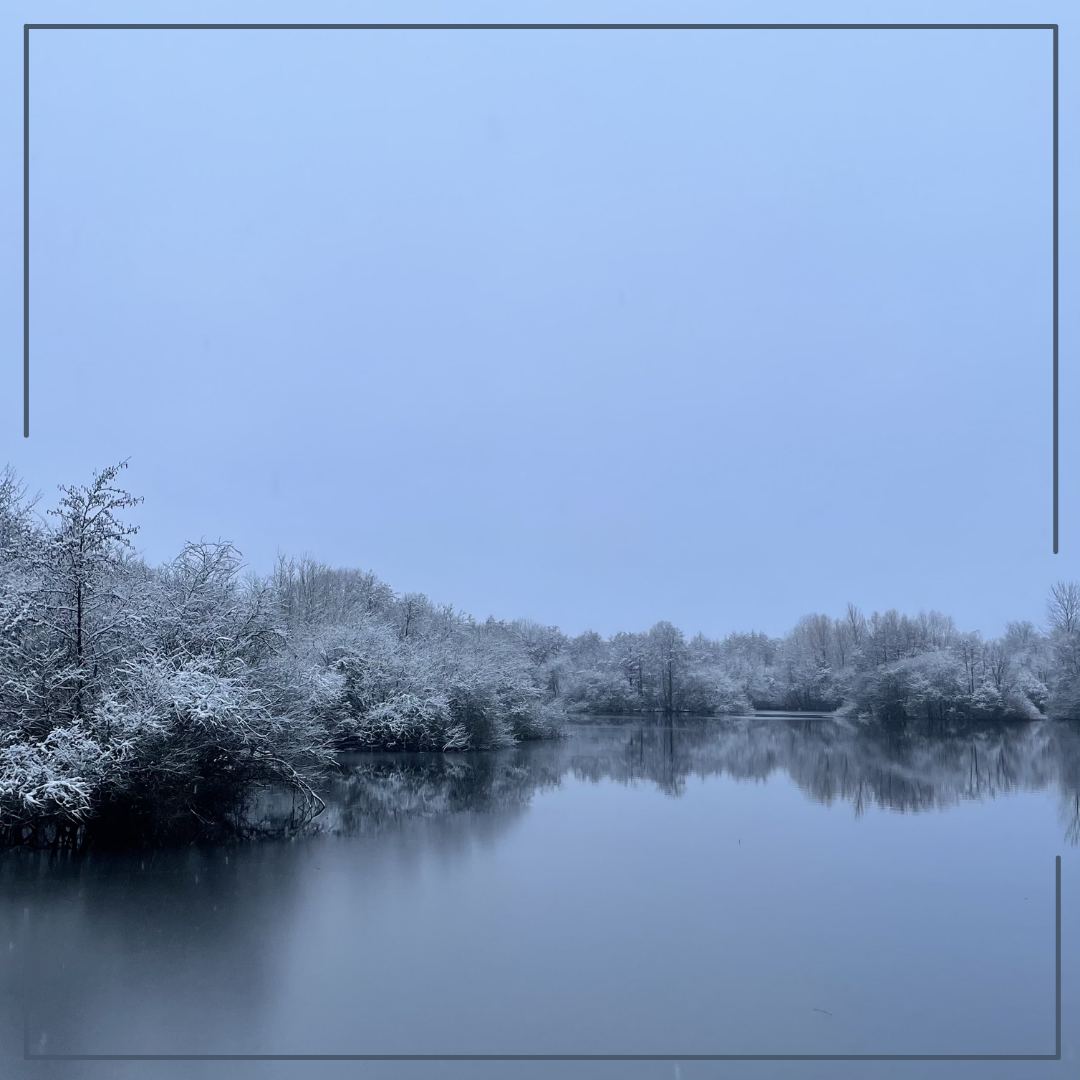 No, it’s not a smudge on your screen, the water towards the bottom of the picture really looks a lot duller than towards the back where it reflects the shrubbery. That’s because today there is some ice sludge floating on the water, how exciting! It’s too warm for it to freeze, but at least it isn’t melting right away. The slush is collecting towards the bottom of the picture because this picture was taken from the top of the weir which regulates the outflow of this little pond, so the general current direction is towards me.⁠⠀

One of the few “behind the scenes” shots of me taking #WaveWatching pictures! See the super awesome current right at my feet? :-D Similar to kitchen oceanography, I believe that wave watching is a great tool in education and outreach, especially during times where activites have to be socially distant. My article “How to Teach Motivating and Hands-On Laboratory and Field Courses in a Virtual Setting” where I am elaborating on both just came out in Oceanography, the official magazine of The Oceanography Society. Check it out at https://tos.org/oceanography/article/how-to-teach-motivating-and-hands-onlaboratory-and-field-courses-in-a-virtual-setting 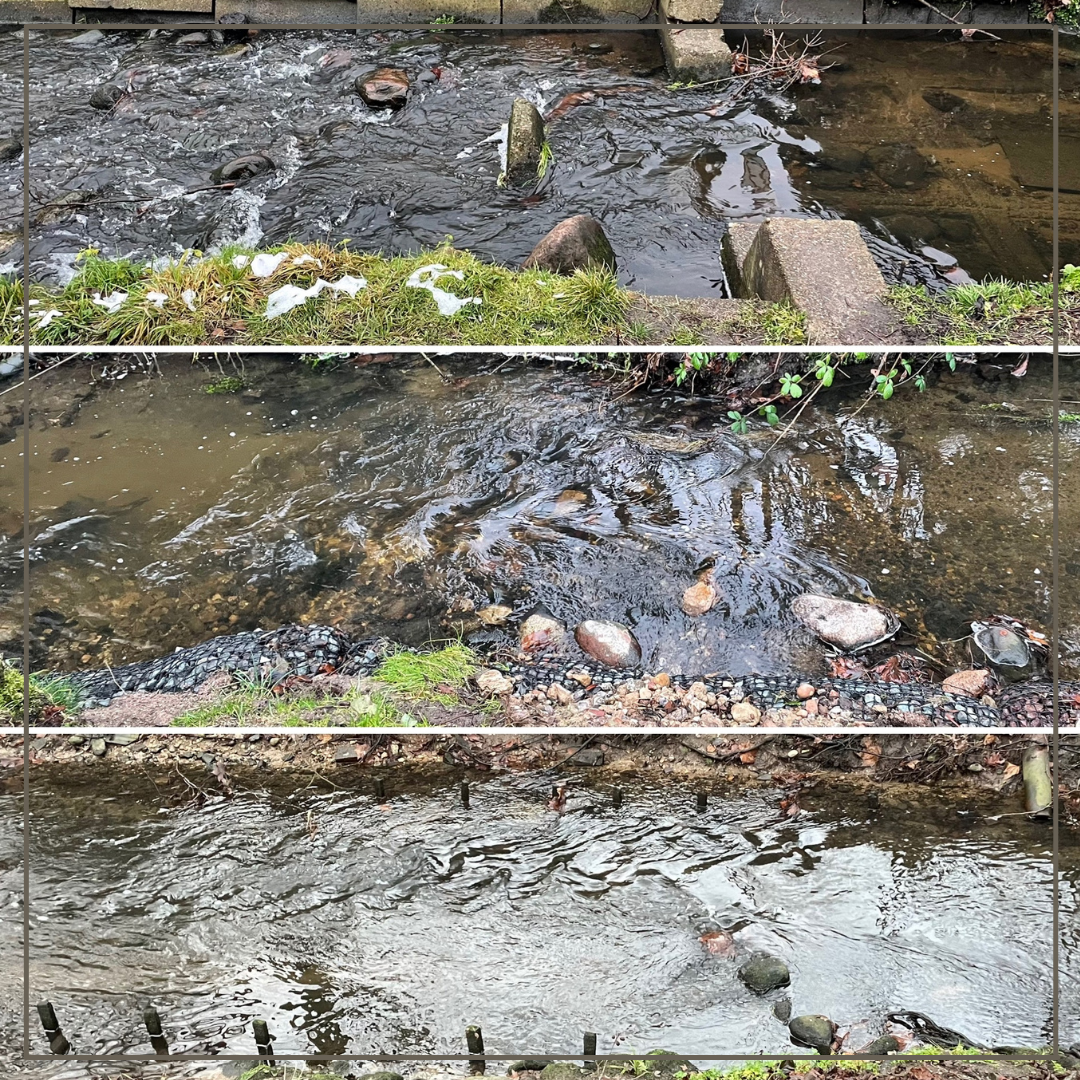 Three flavours of currents in one stream (flow always from right to left).⁠ ⁠ Top panel starts out with a slow, laminar flow (notice how there are hardly any waves upstream of the squeeze-y bit?) and then a very turbulent flow with standing waves that are breaking (isn’t it always funny that they are breaking in an upstream direction? I mean it makes total sense [after all, the lower part of the flow is so fast that it’s pulling the lower part of the wave forward and out underneath the upper part, which then collapses down onto new water, looking as if it is breaking upstream because everything else is being flushed downstream so fast], but my very first intuition is always [after looking at these kinds of flows for years and years!] that they should be breaking the other way round).⁠ ⁠ Middle panel: Some turbulence, and standing waves in the middle (i.e. fast) part of the current, but all in all a very nicely defined current.⁠ ⁠ Bottom panel: throughout the whole panel, there are waves on the flow. Some standing (where the bed is narrowest and the current fastest) and many small waves from small disturbances from the bottom of the bed. There is some turbulence where the water squeezes through the rocks that stick out of the water, but in general it’s still a quite well defined flow despite all the waves on the surface.⁠

#WaveWatching from my desk! Here internal waves in the atmosphere, seen through the gap in the lower clouds. What I think is so cool about clouds is that they can appear and disappear so easily, even without all the moisture falling down as rain or snow or what have you. So in those internal waves, the air moves up and down, and changes in pressure or temperature or some parameter (any #meteorologists here?) make the cloud appear and disappear, leading to these cool stripes!