Christina writes on Twitter: “#wavewatching from a plane, approaching #Panama. @Meermini, do you know what causes those regular ‘wrinkles’?” and how could I resist writing a blog post about what I think might be the explanation? 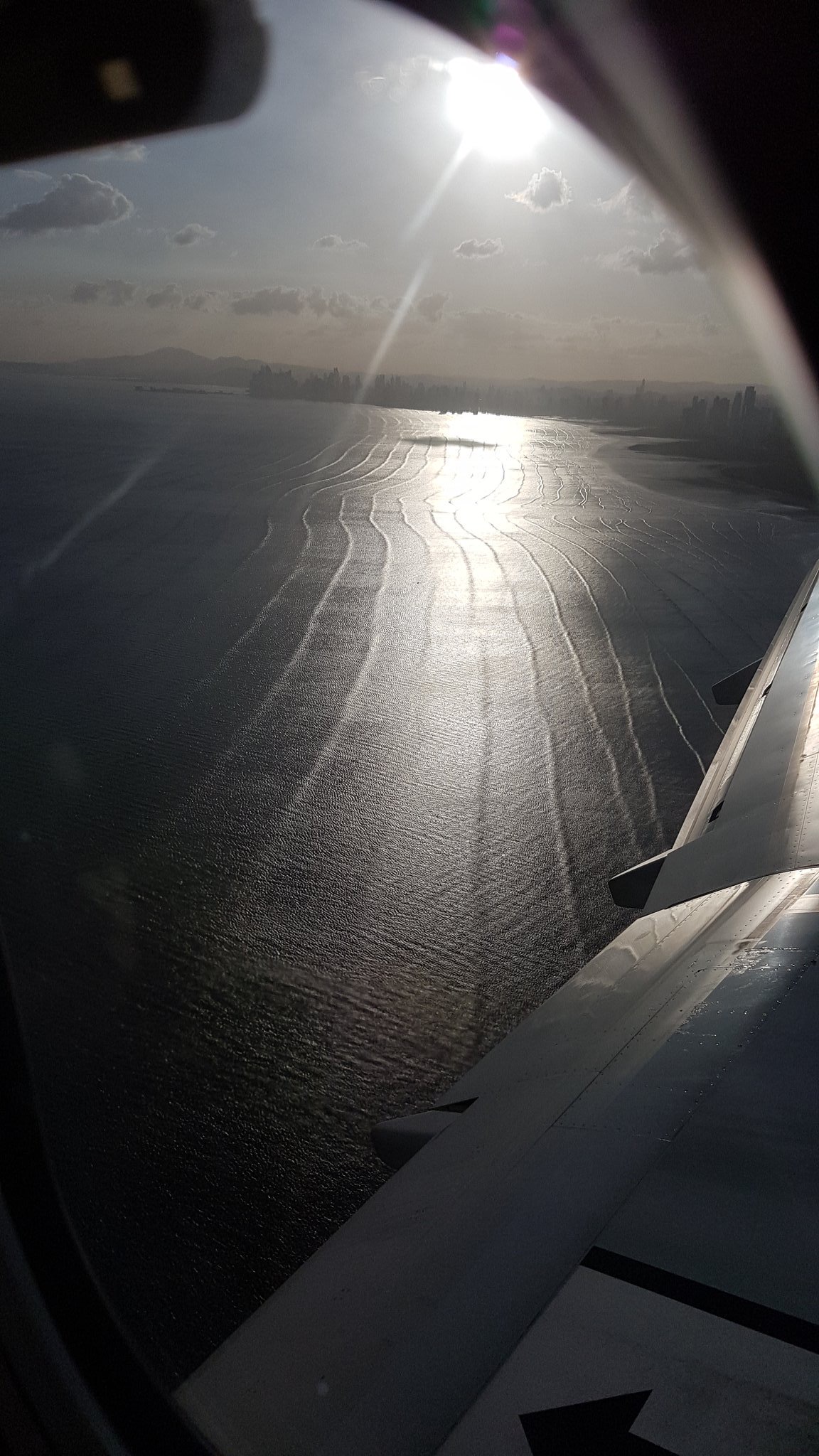 What I think we see here are basically two wave fields: The regular “wrinkles” and then a lot of small crinkle.

The small crinkle are boring: local, wind-generated waves. They are not what Christina asked about.

But the wrinkles are swell: Waves that were formed in a storm far, far away and that have propagated here over a long distance. While propagating from the area where they were formed to the beach where Christina took these pictures, the waves got sorted by wave length. The longer a wave, the faster it propagates in deep water. So long waves from a distant storm will arrive first, and over hours or days the wave lengths of the waves arriving at the beach will get shorter and shorter. The wave lengths we see here seem to be about the height of the high rise buildings we see on the shore. The highest high rise in Panama is almost 300m high, so the wave lengths might not be that long, but at least 100+m.

Why do they look so “wrinkly” and not like proper breakers? When waves are in water that is shallow compared to their wave length (so say water depth would be less than 50m for these waves if we assume they are 100m long, which I think are both reasonable estimates), their shape changes from the normal sine-shape that they would show in deep water, to steep crests and loooong troughs. You might have observed waves with this shape for example in the very shallow waters of a beach on the wadden sea coast or any other beach with a really small slope, where waves look like sausages or pool noodles that are being shoved onto the beach (compare for example to pictures in this post).

What makes me confident that we are really seeing what I’ve just described above? Mainly that I can see the interaction of the waves with the sea floor. If you look at the pic above, do you see the area where the waves bend? That’s where the water is shallower. I’ve tried to sketch that below: The red lines are — in first approximation — the wave crests (I’ve only drawn in every third or so for clarity). Red dashed lines are kinda the second approximation of the wave crests: Those are the deformations that I want to talk about. And those deformations are caused by a shallower area, which I’ve drawn in with the green dashed line. This little submerged headland slows that part of the waves down that runs above it (because in shallower water the wave’s speed only depends on water depth, not on wave length any more), but not the rest of the waves that propagate towards the beach with the straight crests intact.

It’s even easier to be confident when we look at the next two pictures that Christina shared with me. Now we are a little closer to the beach and can see the area where the waves break and where it is shallow enough that the wave lengths drastically decrease (since the waves are slowed town more and more the closer they come to the beach, waves that are further out are still faster and can catch up to waves in front of them). This is very typical for the parts of a beach where the depth changes rapidly. 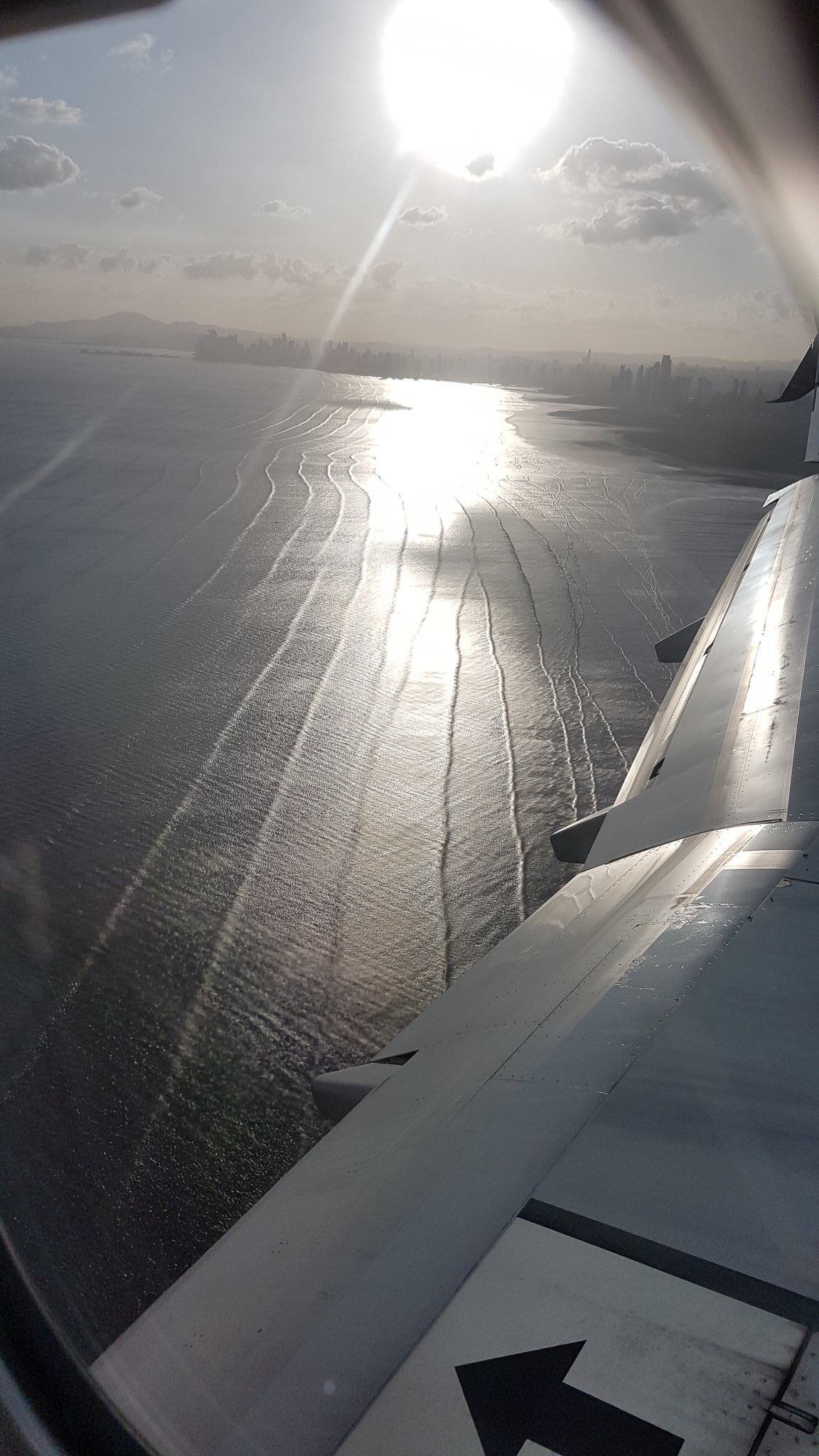 And on the next pic, we see even more clearly that the waves change from pool-noodle shaped offshore to breaking waves close to the beach: 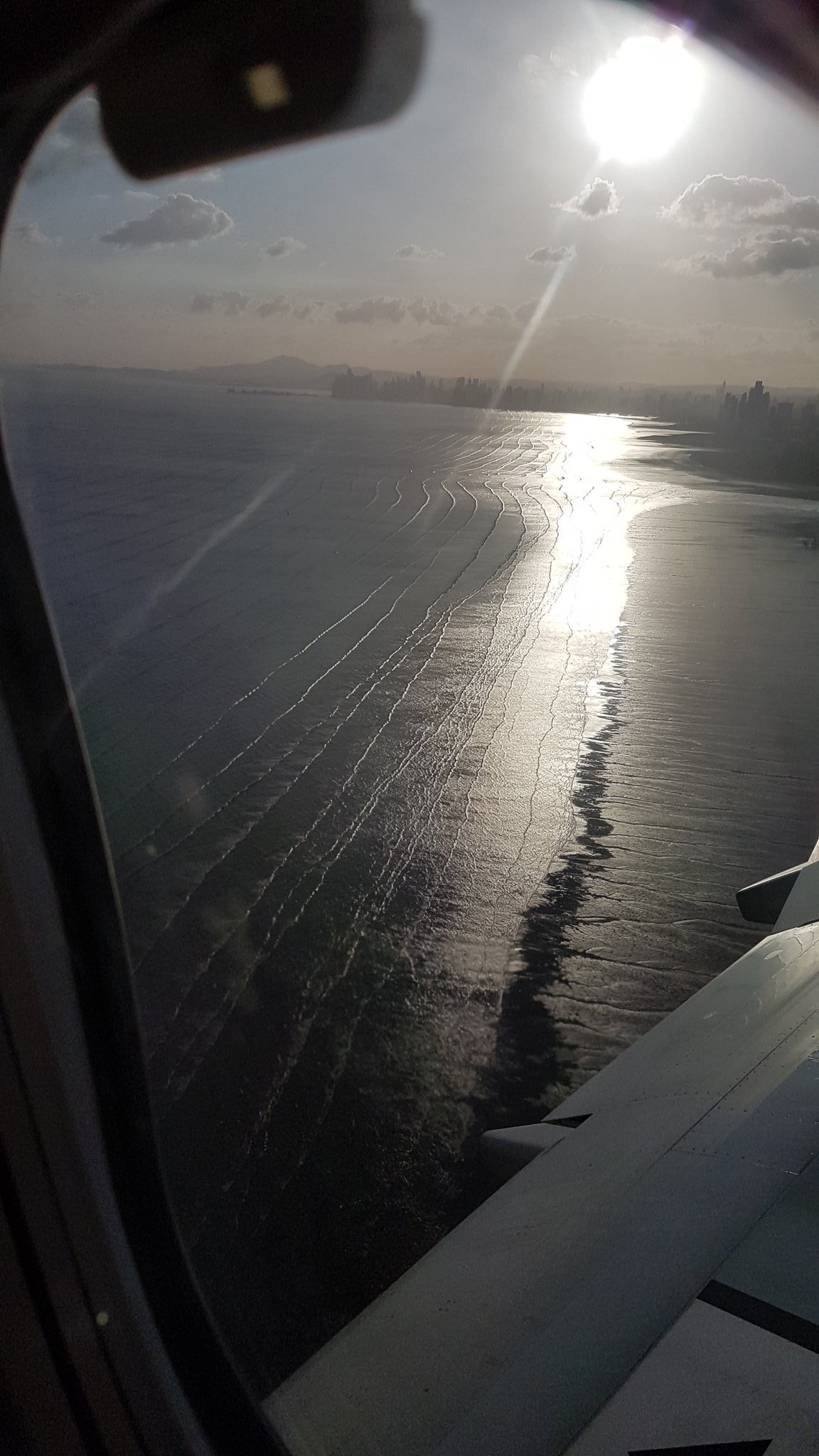 In case you don’t see what I am trying to point out, here an annotated version of the pic above. Green dashed circles: Smudges on the window, or possibly reflections on the window, but nothing to do with the waves. Red circles: Here we see foam on the back side of breaking waves, so there was definitely some wave breaking going on here. And blue circle: Cool structures in the flow of water that is retracting downslope from the beach, back into the ocean. 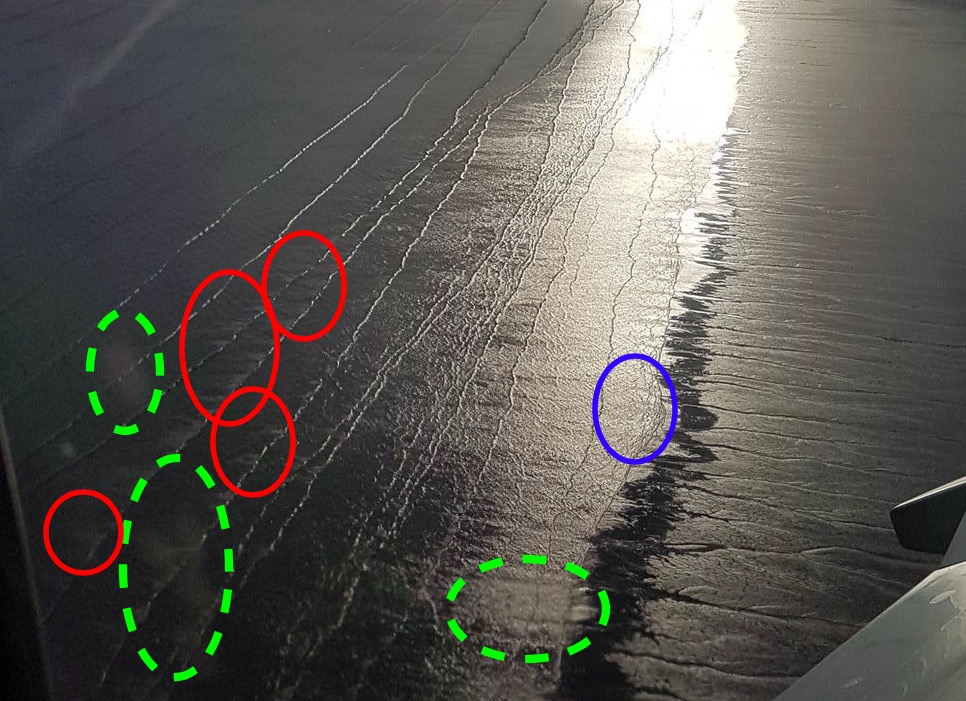 So much for now. No idea if that made any sense to anyone except myself. Please let me know! :-)

4 thoughts on “Christina’s #FriendlyWaves from Panama!”