A long, long time ago (ok, in fall of 2017) I got the chance to join Elin Darelius and Anna Wåhlin’s team for a measuring campaign at the Coriolis platform in Grenoble for several weeks. I was there officially in an outreach officer-like role: To write and tweet about the experiments, conduct “ask me anything” events, write guest posts newsletters and websites, etc.. A lot of my work from that time is documented on Elin’s blog, that I blogged on almost daily during those periods. And we had so many amazing pictures to share (mostly green, that’s because of the lasers we used). 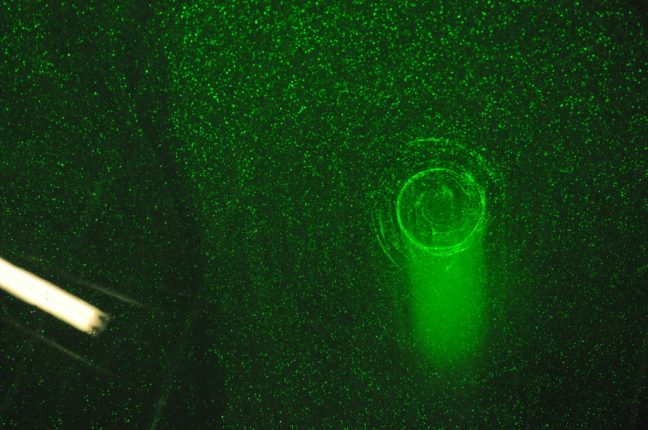 Turbulence in a rotating system is 2D, therefore the whole water column is rotating in this eddy that we accidentally made when moving parts of the structure in the tank

But I was extremely lucky: Neither Elin nor Anna nor anyone else on the team saw me as “just the outreach person”, which is a role that outreach people are sadly sometimes pushed in. Instead, they knew me as an oceanographer and that’s how I was integrated in the team: We discussed experiments all the way from the setup in an empty tank (below you see Elin with her “Antarctica”) 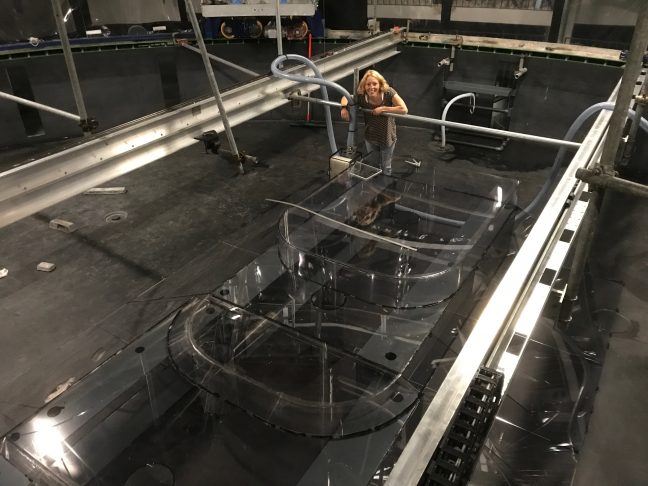 No matter how carefully you planned your experiments, once you start actually conducting them, there is always something that doesn’t work quite the way you imagined. But since time in facilities like the Coriolis platform is limited, it is hugely important to think on your feet, come up with ideas quickly, and fix things. Which is the part of science that I enjoy the most: Being confronted with a problem “in the field” and having to fix it right then and there, using whatever limited equipment and information you have available. 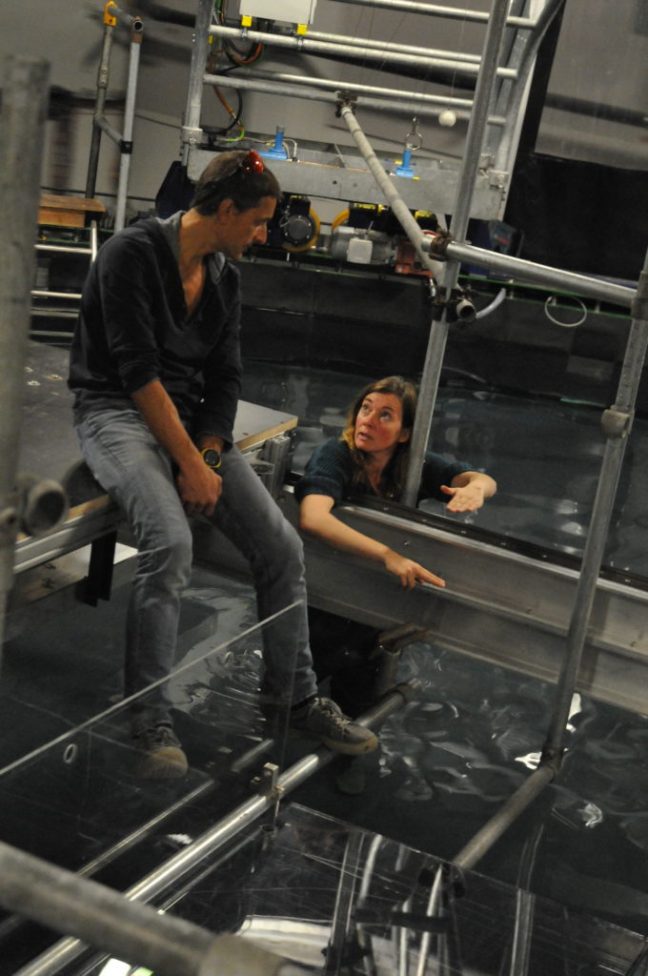 Speaking of “limited information”: Sometimes you have to make educated guesses about what’s in the data you are currently collecting in order to make decisions on how to proceed, without being able to know for sure what’s in the data. We took tons of pictures and videos and obviously also observed by eye what was happening in the tank, but in the end, the “real” data collection was happening with images that we couldn’t analyse on the spot (and that’s what the research part is about that took place in between fall of 2017 and now: many many hours of computing and analysing and discussing and rinse and repeat). 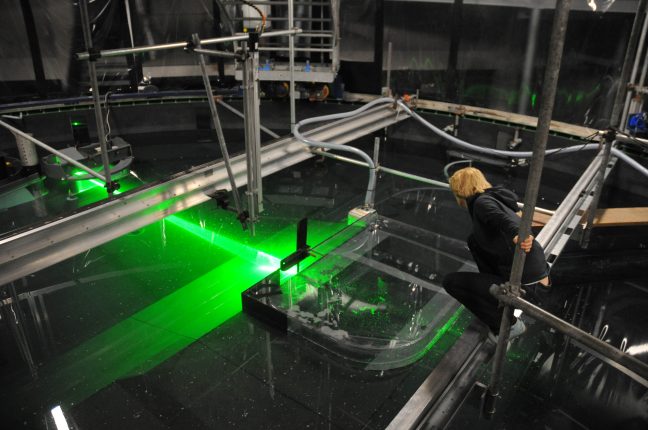 Grenoble was also an amazing experience just because of the sheer size of the Coriolis platform. Below you see the operations room, an office that is built above the tank and rotates with it. And let me tell you, being on a merry-go-round all day long isn’t for everybody! 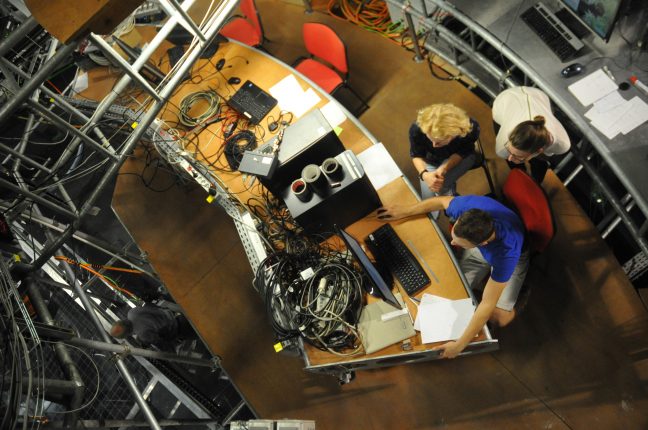 I really also enjoy the hands-on work. Below is me in waders in the 13-m-diameter rotating pool (while it’s rotating, of course), using a broom to sweep up “neutrally buoyant” particles that we use to track the flow that over night settled on the topography (so much for “neutrally buoyant”, but close enough). Sometimes it comes in handy to be an early bird and doing this work before everybody else gets up, so the tank has the chance to settle into solid body rotation again before experiments start for the day. 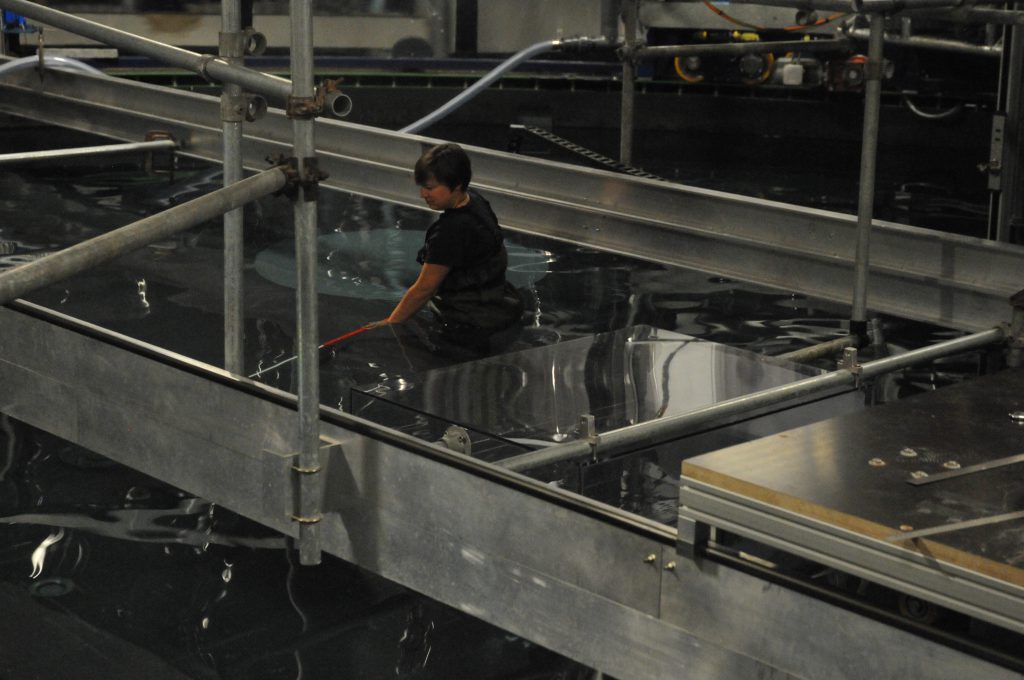 Here you see the layer of particles in different stages of disturbance, and me having fun with it (it might not be obvious from the picture, but I’m standing in waist-deep water there) 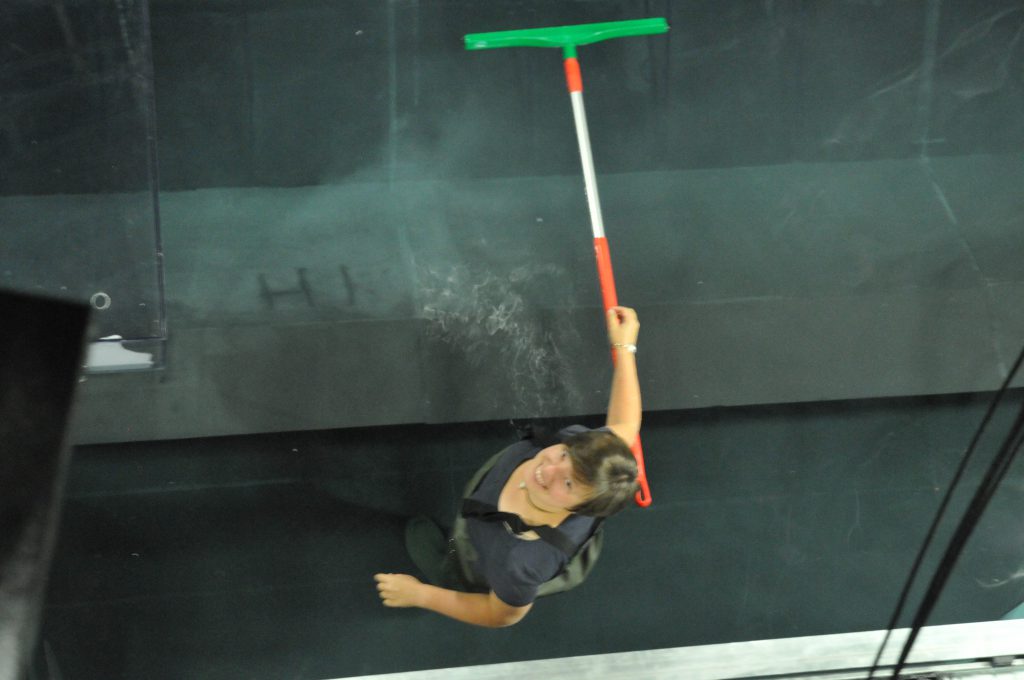 But then we weren’t playing all day long for weeks. There were times of intense discussions of preliminary results. Exciting times! And of course, those discussions only intensified when all the data was in and could be analysed in more depth. 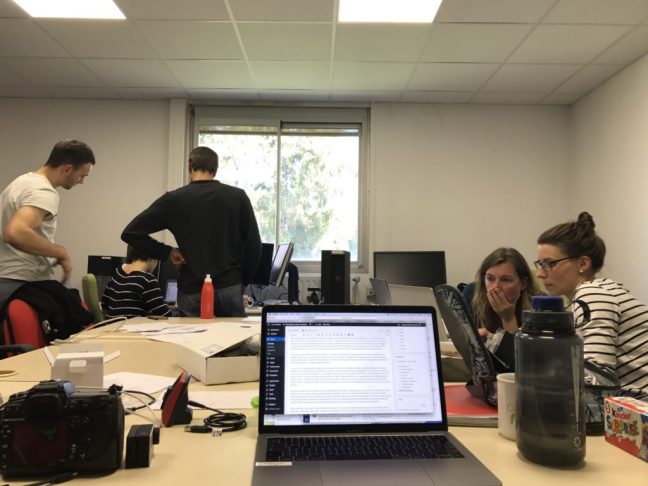 I loved being part of the whole process and contributing to this exciting publication now!

Related Posts to "Playing in a 13-m-diameter pool on a merry-go-round results in Nature article":