This is a #friendlywaves challenge, where I try to explain other people’s wave photos and they tell me how I did.

I love it when my friends see waves, think of me, whip out their cameras, take pictures, and send them to me! In this case, Nena even used a telephoto lens and took the amazing pictures below that she allowed me to share with you!

They are the perfect example for talking about wakes when a ship doesn’t just go straight ahead. Because, of cause, ships going straight ahead are the easiest case, like the one we see below. 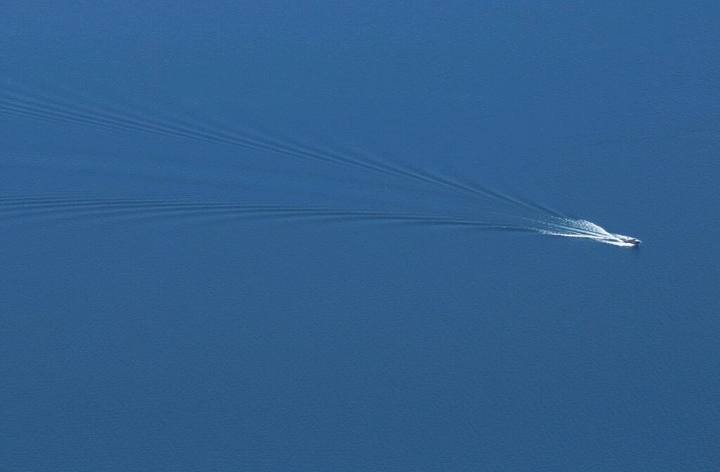 Here, we see the two different constituents of a wake: The turbulent wake that is the white stripe right behind the boat, that turns blue a little way behind the boat but stays a lighter color than the surrounding water.

Now when the boat takes a turn, this messes up the structures of the waves making up the V-shaped wake (or makes them more interesting, depending on your point of view). Below, the boat has taken a right turn, which you can see from the turbulent wake that starts right behind the boat as a white stripe that then changes color to a lighter blue than the surrounding water (with a darker stripe to each side, and then the V further out). 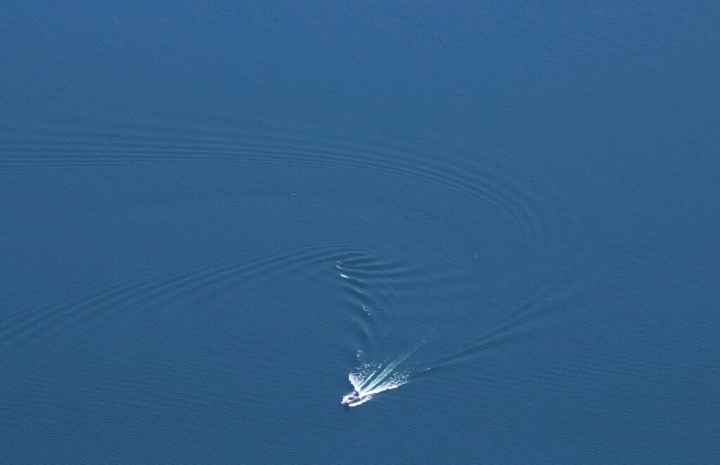 Now looking at the individual waves of the V-shaped wake, we see that they get bunched up on the right side of the boat’s trajectory, while they are getting fanned out on the left side.

Now imagine the boat’s trajectory as the shaft of a feather. If you have ever bent a feather, you will have observed that on the side the shaft is bent towards, the individual barbs (I looked this up: barbs are the little thingies that spread outwards from the feather’s shaft) get bunched together, while on the other side they fan open.

So far, so good. Still with me?

Now what happens as time goes on is that the V opens up — the two sides move away from each other. We don’t usually notice this because we are used to focussing on the wake relative to the ship rather than to some fixed vantage point. But if we looked at a fixed point while a ship going past, we’ll see the wake spreading over time until one side of the V reaches us. 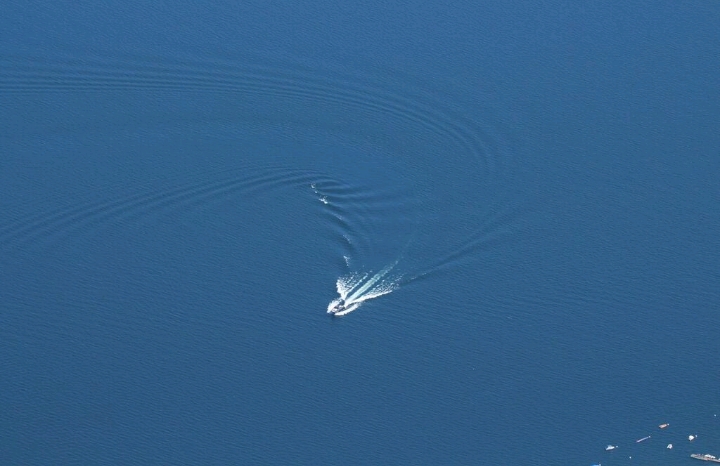 And this spreading of the V is what’s making interpretation of the picture below a little difficult. The picture below is showing almost the same part of the ocean as the one above (see the little white and blue moored boats in the bottom right corner of the lower picture? They are the same boats that are visible at the left of the bottom right corner above), only a little later. During the time between the two pictures, the ship moved further towards the bottom left corner, but also the wake spread further apart.

Above, you see that some “barbs” start running into each other (the ones where the bend is strongest, where there is foam on breaking waves because the waves suddenly become a lot steeper due to interference). So some time later, they have grown longer and are now crossing each other, which leads to the checkerboard pattern located right inside the bend of the boat’s trajectory. If you follow the V-shaped wake from the boat backwards, you can still make it out, even though it’s been deformed by the ship turning around. 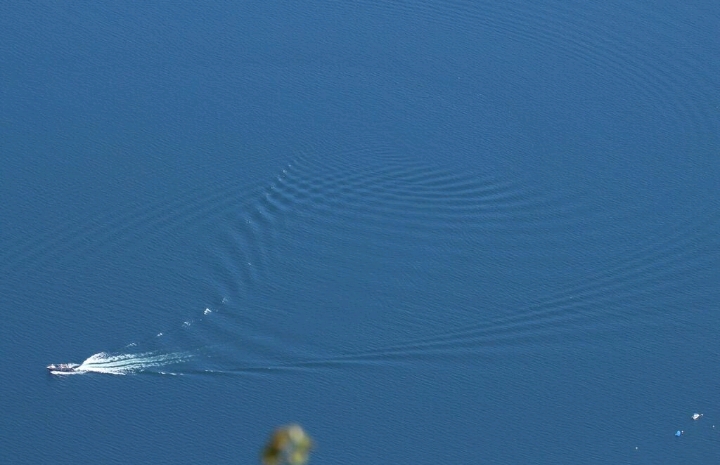 Tell me, Nena, is your family happy with this explanation? :-)

Related Posts to "Nena sent me some #friendlywaves from Lago Maggiore":

3 thoughts on “Nena sent me some #friendlywaves from Lago Maggiore”