Anyone who might be new to my blog because of yesterday’s presentation at #SiPManc — please don’t be scared and run away, this is the most complicated #friendlywaves I have ever gotten, usually things are A LOT easier! :-)

I love #friendlywaves! Victor sent me the picture above. He took it in 2017 in Tampa, Florida, and I think it’s so fascinating! There is so much going on, let’s try to make sense of it!

First, the most obvious thing making waves here: The two boats. Clearly they are making waves, and they might explain a lot of what we see here. But on the other hand, they might not.

Below, you see the part of the wave field that is 100% due to these two ships: Their V-shaped wakes (in red) and the turbulent wake behind one of the ships (in yellow). 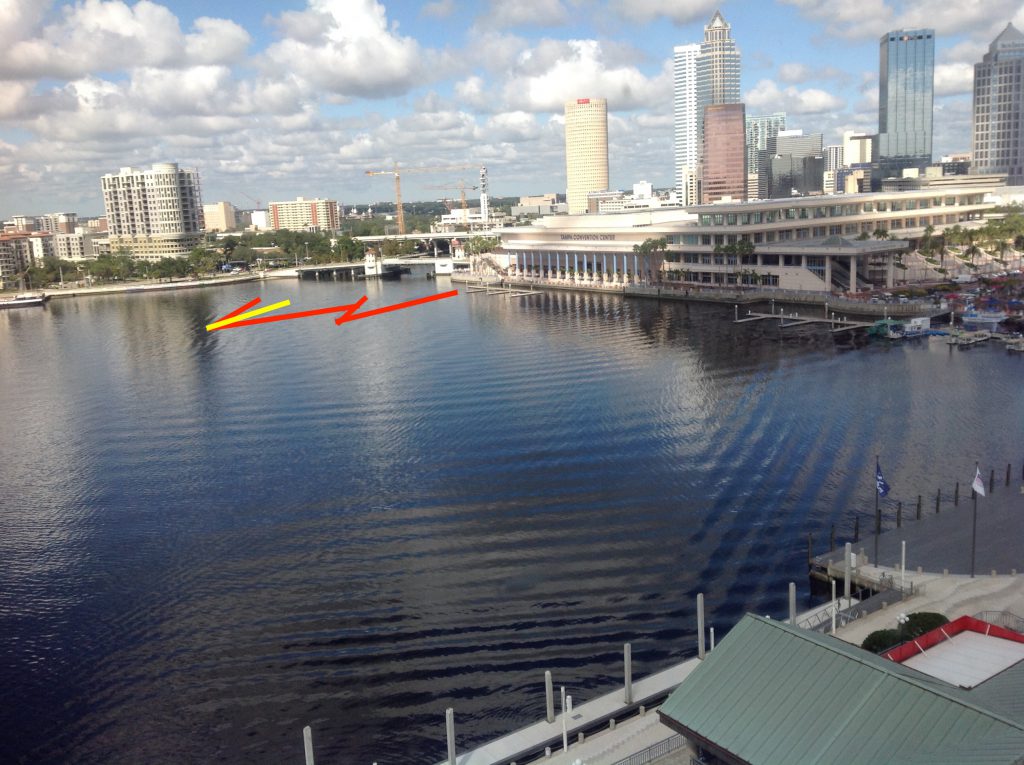 The very prominent wave pattern (marked in red in the image below) might be due to these two ships as was suggested to me, but if it is, then those ships changed course quite drastically before they created the waves I marked in the previous picture (and I can see no evidence of such a change of course, usually a turn would leave a trace similar to this one).

If the boats, as I assume they did, came out from underneath the bridge and sailed in a more or less straight line (and that seems to be the case judging from their wakes as indicated in the picture above), there is no way they could have made waves that travel in front of their V-shaped wake. Similarly to how you can’t hear the supersonic aircraft before the supersonic boom (because the sound can’t travel faster than the speed of sound and the pressure signal thus gets formed into the Mach cone), waves can’t outrun their wake (which is like their 2D Mach cone). So I don’t believe that those waves were made by those two ships. Rather, I believe that they were made by a ship that is no longer visible in the area we are able to see.

So remember, this is the wave pattern we are trying to explain (Marked is only one wave crest, but you see that there are several parallel to the marked one): 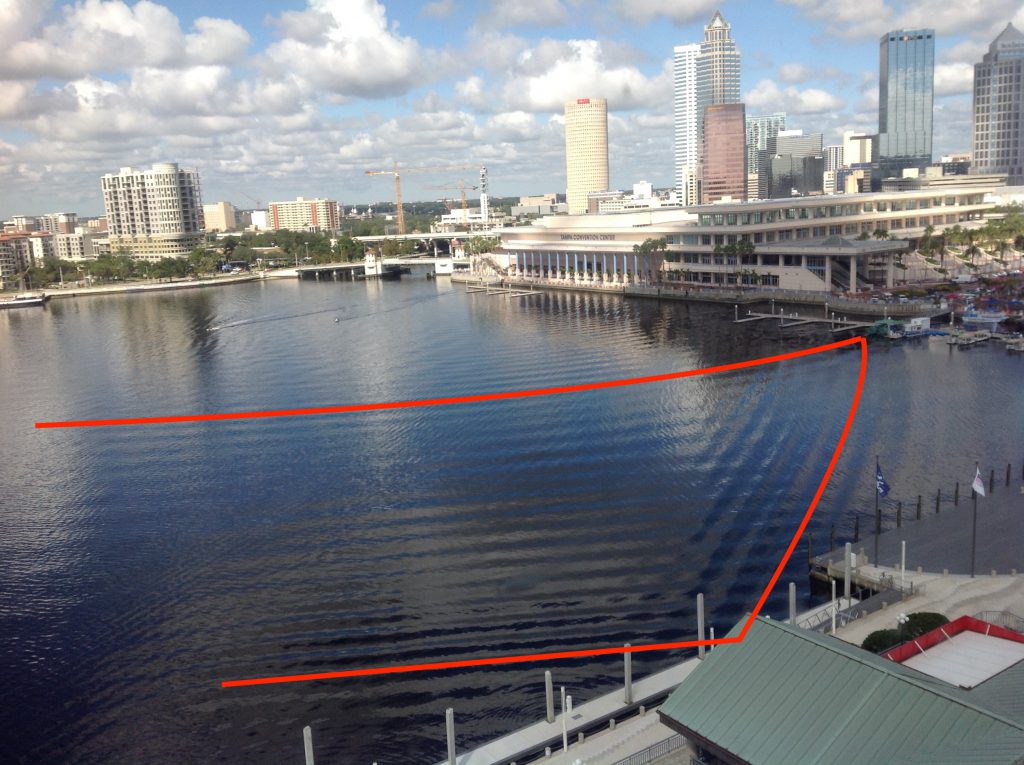 We do nicely see how the wave is reflected by the straight sea walls. But what direction is it traveling in? And what caused it? Let’s speculate!

First: let’s consider the very weird shape of the body of water shown in the picture. Quick search for Tampa on Google Maps lets me believe is that the picture was taken more or less from the position of the white star and the view is the area between the two red lines. Looking at that map, we see that the water we see opens up into four different water ways: One to the north, one to the east, one to the south east, and one to the south west. The two to the south eventually open up into Tampa Bay. 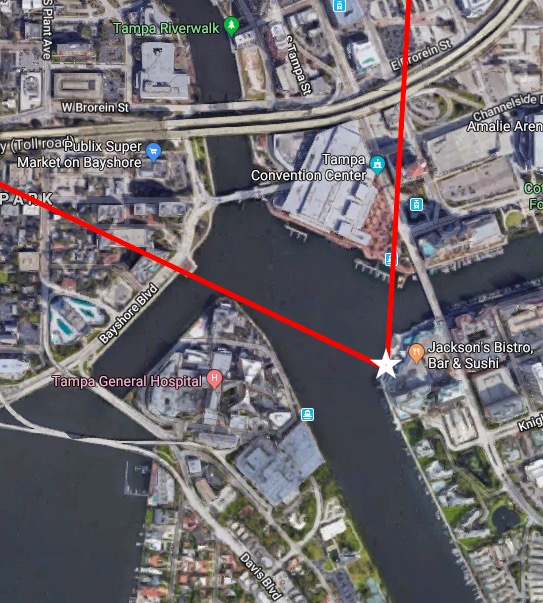 The wave field that we are trying to explain would look somewhat similar to what I drew in below (green): 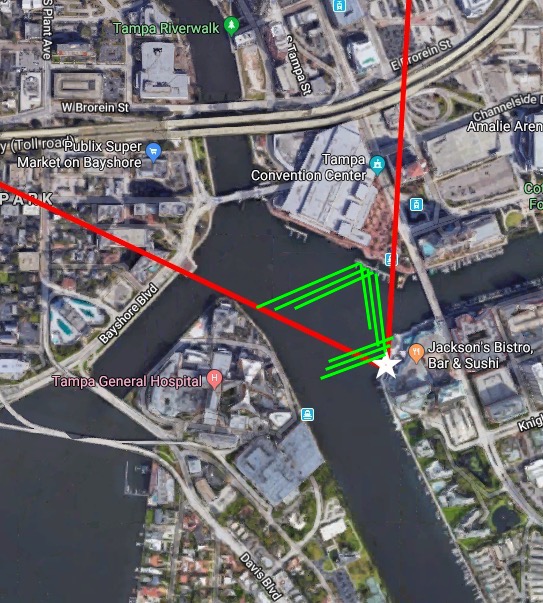 My best explanation of that green wave field above is this: A boat that went on the course that I drew in in yellow: 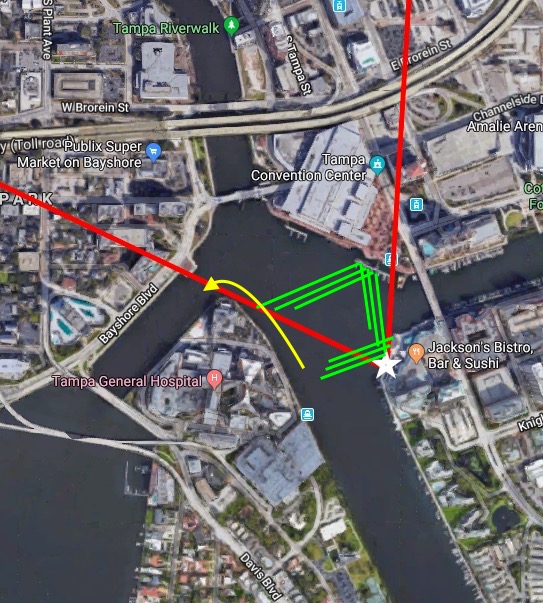 So far, so good. Wanna know why I believe this is what happened? Then this is the picture for you! 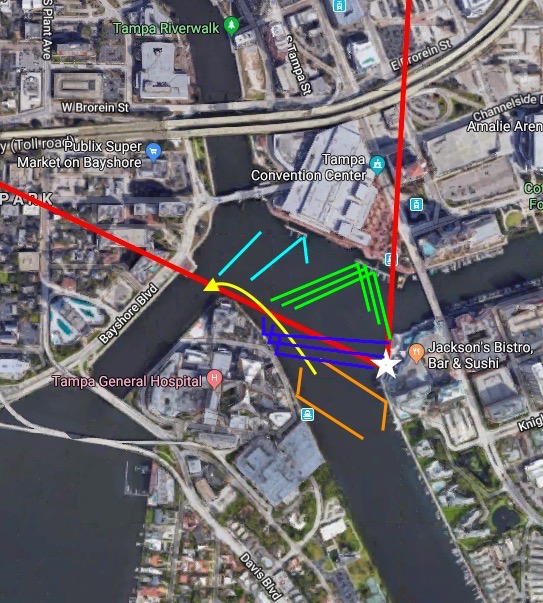 Assuming the boat followed along the yellow track, the other lines are the wake it would have produced:

This is the best explanation of what must have happened that I can come up with, and I have thought about this quite some time (more on that at the end of this post) :-)

But then there are tons of shorter wave length waves that we have to explain, too: See those marked in red, yellow and green below. 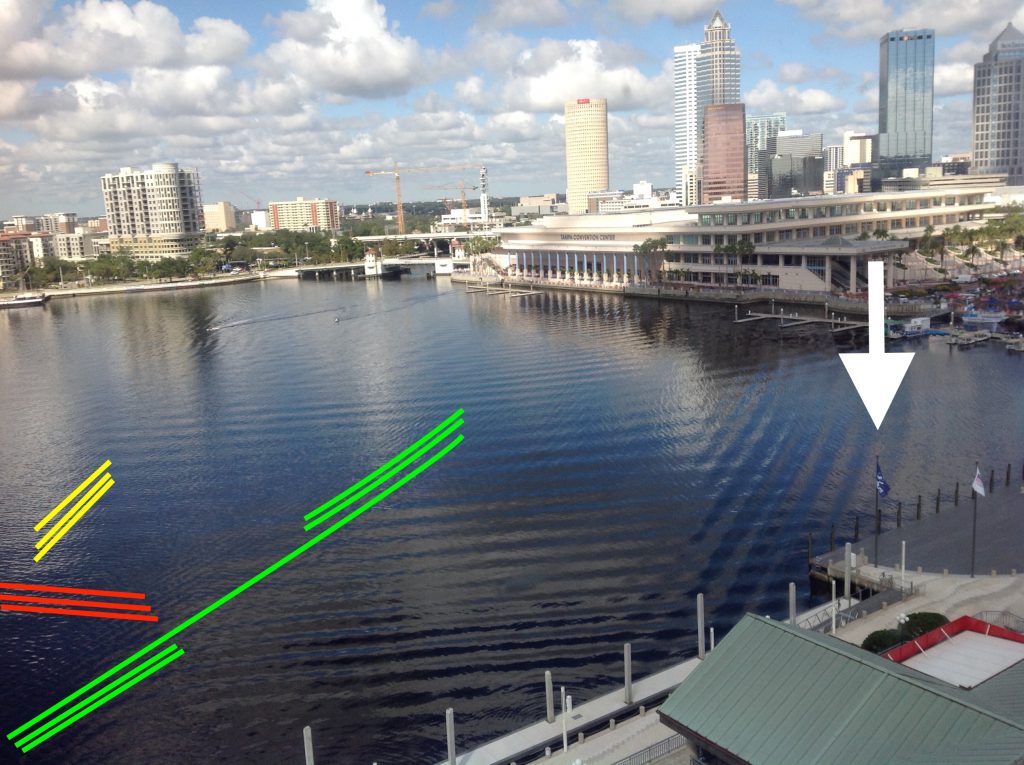 I am confident that the ones I marked in red are wind-driven waves coming across the open area. Their direction also agrees quite well with the wind directions the flags indicate (marked with a white arrow above). I believe that the ones I marked in yellow and in green are two separate wave fields at a slight angle, but that might be an optical illusion, I am not quite sure.

If we go back to the map, I believe the wave fields I marked above would look pretty similar to the ones I drew in below (I changed the red waves above to magenta waves below, because red was already taken. Note the wind direction marked with a white arrow: it looks pretty much perpendicular to the now-magenta wave crests): 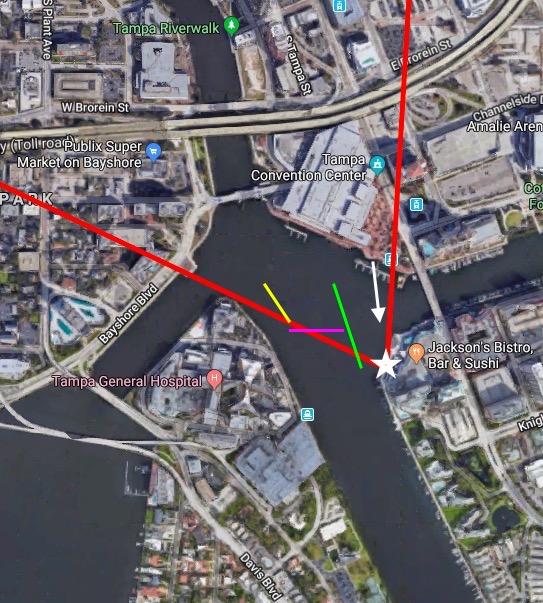 And looking at the angles in that depiction of the waves, I could imagine that the green wave field is a reflection of the magenta wave field where that one hits the shore on the side where the picture was taken from (see light blue wave crests). As for the yellow one: I still have no idea what caused that. But maybe there need to be some mysteries left to life? ;-)

To end on something that I am confident in: The half circles near the bottom of the picture are the result of something (two buoys? two small boats?) moored on that pier, bobbing up and down in the waves, thus radiating wave rings with shorter wavelengths and higher frequency than the wave that is exciting the movement. 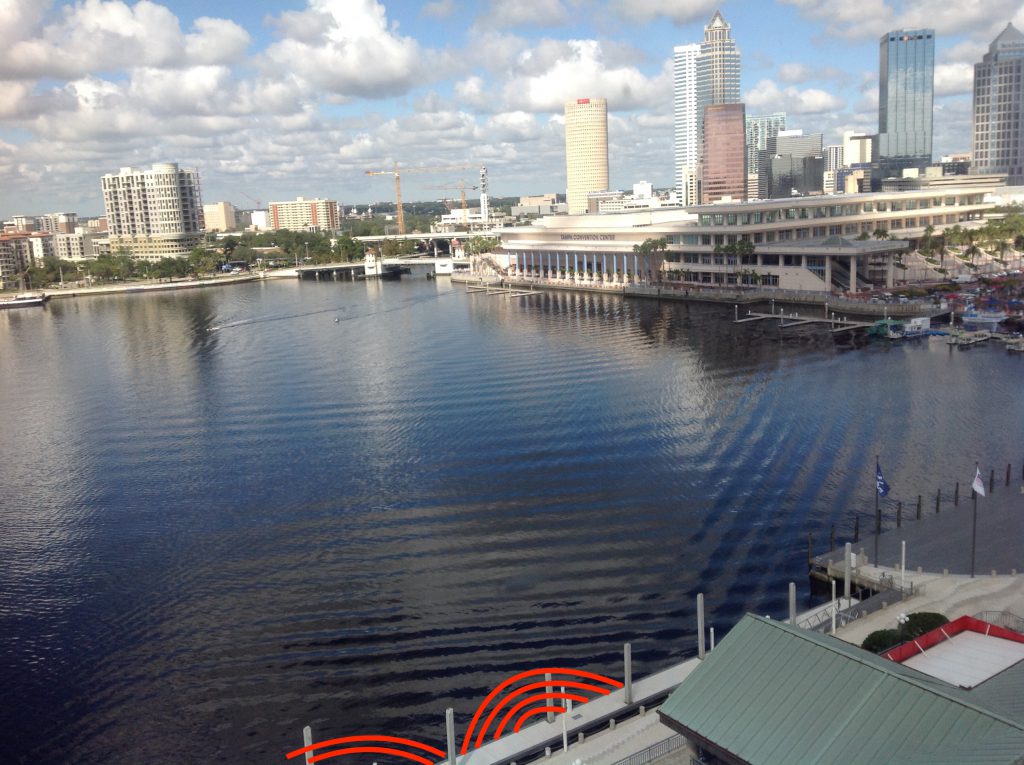 But after all this hard work (more on that at the bottom of this post) — let’s take a minute and look at those beautiful interference pattern again where the wave fields cross each other and create a checkerboard pattern. How amazing is this? 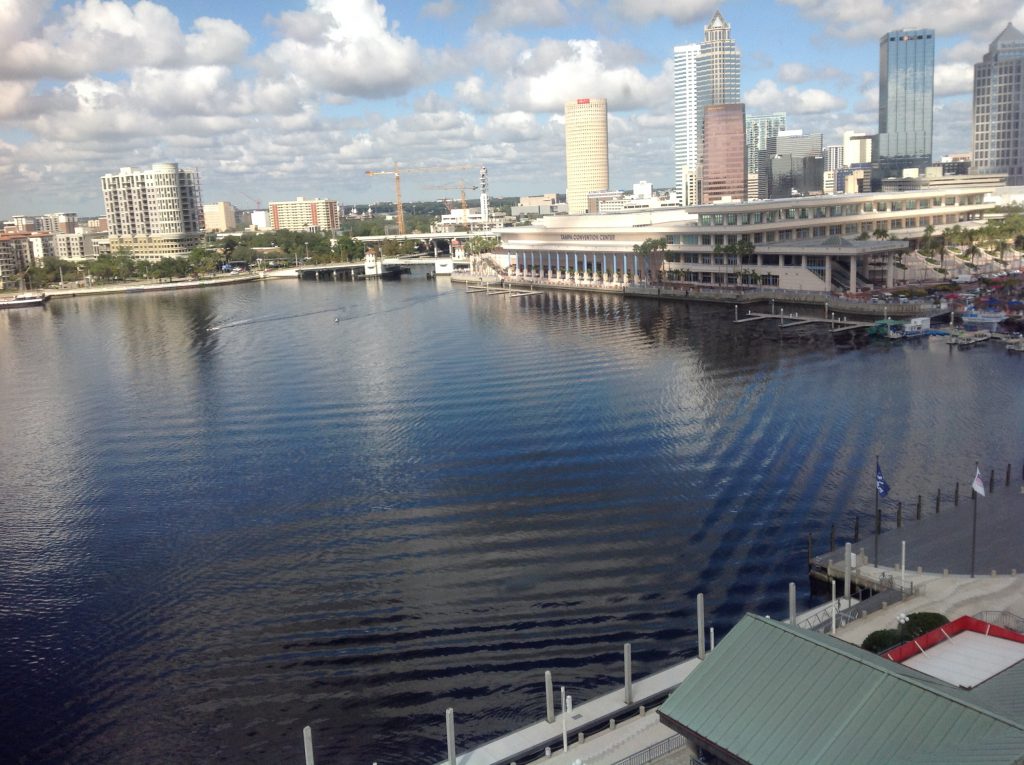 Phew! I love #friendlywaves, but this was quite a challenge! How did I do, Victor? :-)

If you or anyone else have any comments or suggestions — I would love to chat about alternative explanations!

P.S.: Just to give you an idea of what my process was like: It involved late night scribbles on a tea bag (because that was the best “paper” I had available on my bedside table in the hotel in Manchester) and I needed to play scenarios through in my head… 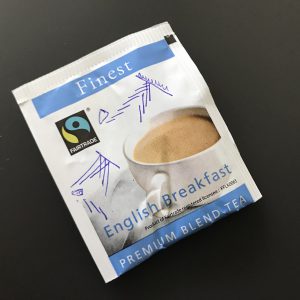 This is how much I love wave watching! :-)

Related Posts to "A #friendlywaves from Tampa, Florida":