A little more wave watching, today with a focus on how waves change direction when they run into shallow water. Let’s look at this beautiful wave and see what happens when it reaches the shallow shore. 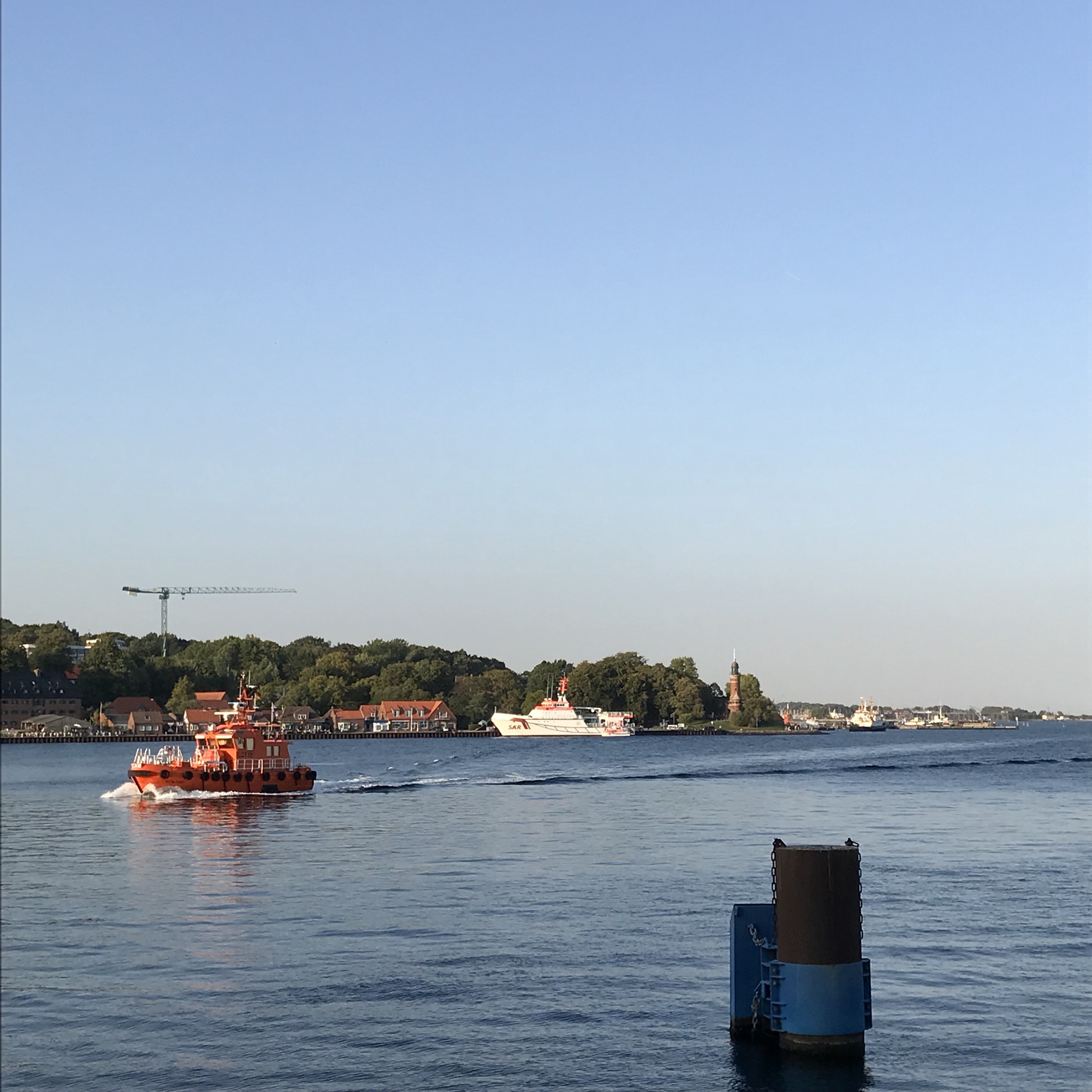 Above, you see the wake of the pilot ship, consisting of many wavelets that propagate as parallel wave crests towards the shore.

Below, you see that the wave is propagating at an angle to the shore (something around 45 degrees, maybe?). If you focus on the wave crest that is just offshore of that little obstacle in the water (curious enough, a piece of brick wall), you clearly observe that angle. But then looking at the next wave crest in-shore, it is almost parallel to the shore! Assuming that both crests come from the same wave field, so that the second one was in the same position as the other one only moments before (which I know it was because I observed it), something clearly happened between then and now.

Why do waves change direction as the water depth changes? As waves run from deep into shallow water, at some point they start to “feel” the bottom, which slows them down. 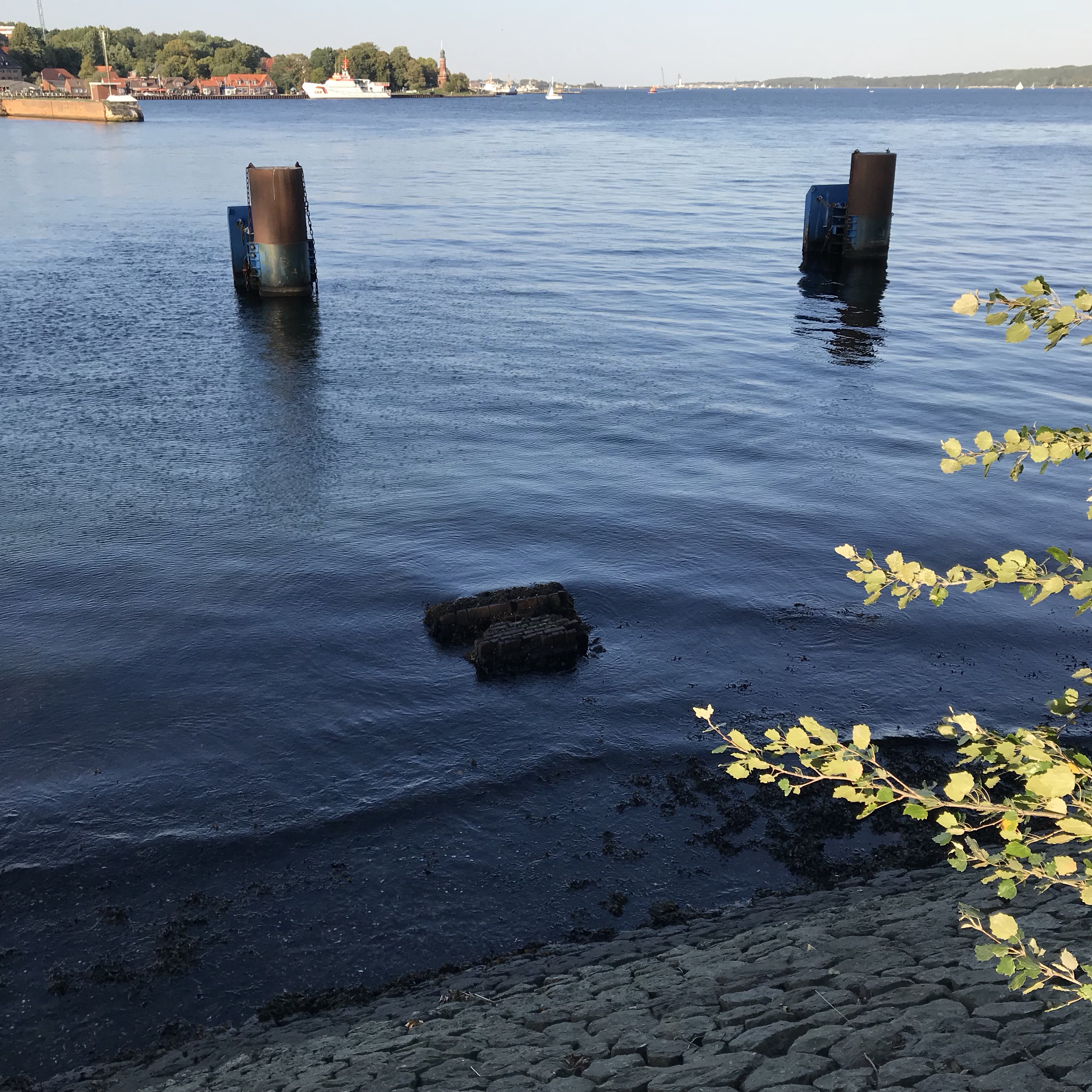 Or, more scientifically speaking, the dispersion relation for shallow water waves is a function of water depth: The shallower the water, the slower the waves. That means that if a wave crest is running on a slope with one side being in shallower water while the other one is still in deeper water, it will change direction towards the shallow water because the shallow side of the crest is slowed down while the deeper side keeps on moving faster, thus forcing the whole crest around a curve. 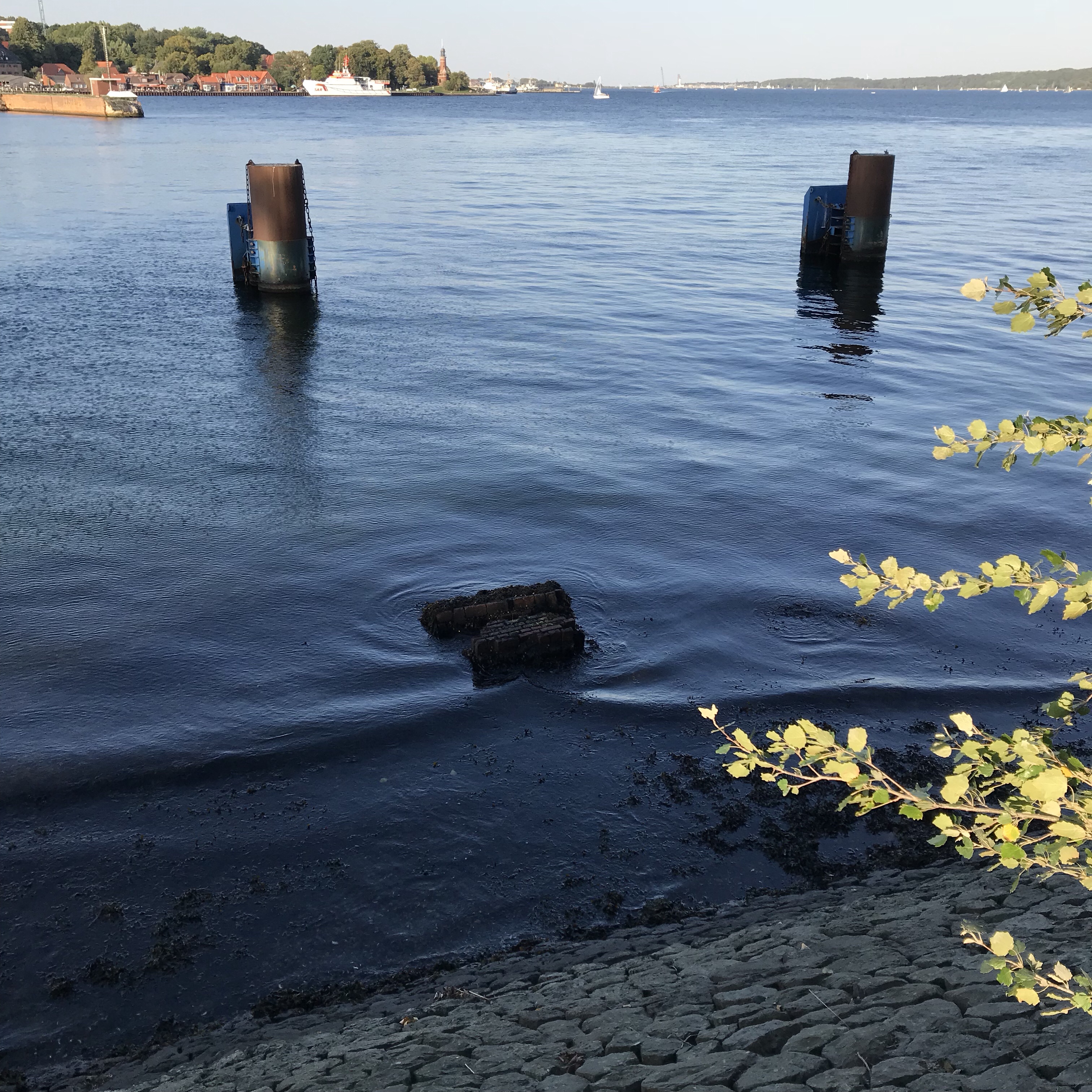 But in this picture series there is more to see: See how the wave crest gets deformed after it has passed that obstacle?

This is a process called diffraction: The change of direction after a wave crest has passed either through a slit and then starts radiating from that slit as circle segments, or, in this case, an obstacle. The wave passing an obstacle is, in a way, the same as the wave passing through two wide slits which are very close to each other, only separated by the obstacle: The edges of the wave crest at the edges of the “slits” also start radiating out as circle segments! 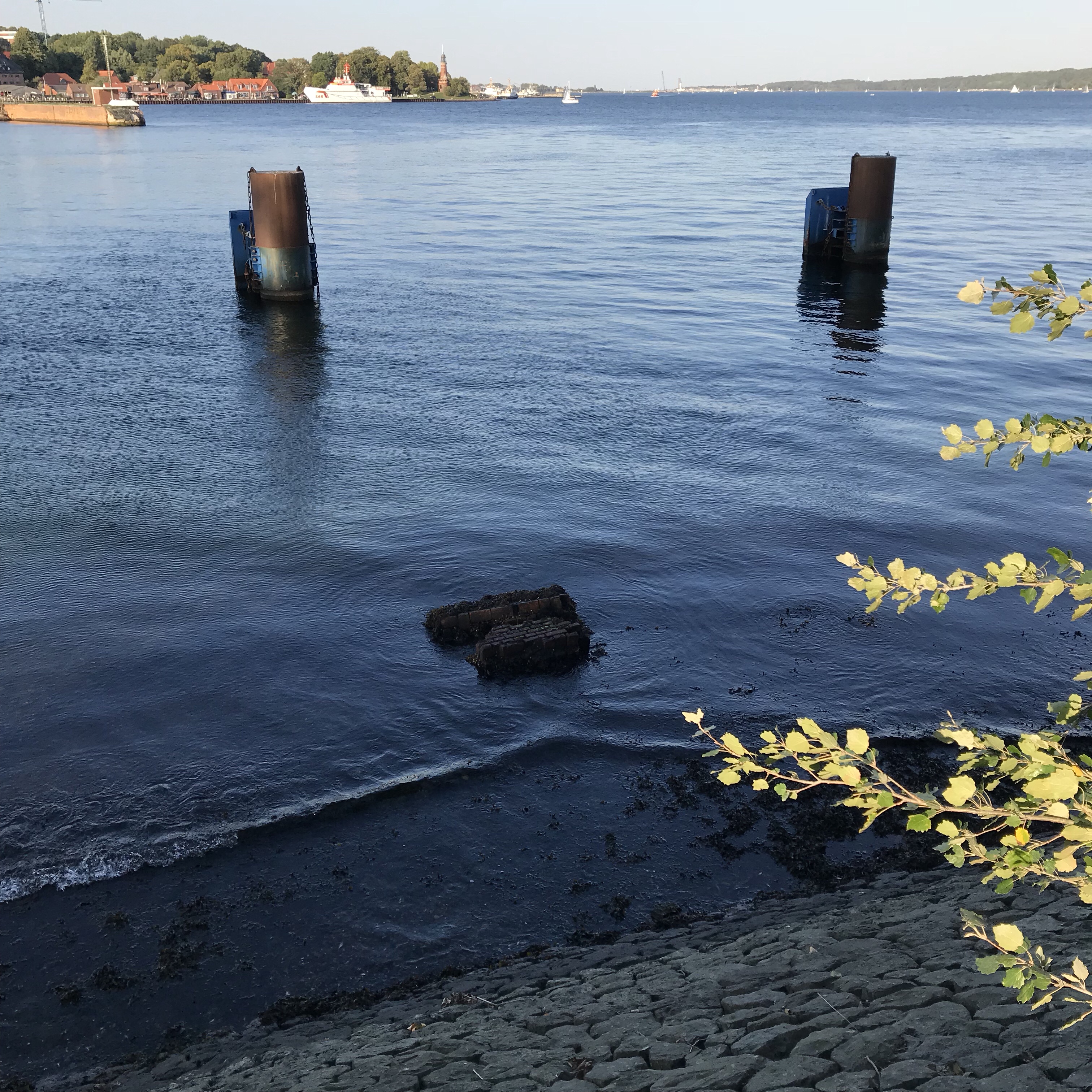 One spot, so many things to observe!

And there are, of course, ships. What I wanted to show on this picture is a close-up of the turbulent wake of the ship, but it’s really difficult to see so I’ll let that pass for today.

And the picture below shows so much cool stuff: Waves radiating from that pylon. Ripples on the surface by a gust of wind. Wave crests getting a lot steeper as they run up on the slope. And, my main reason for posting: I really like how the wave is spilling as it breaks! :-) 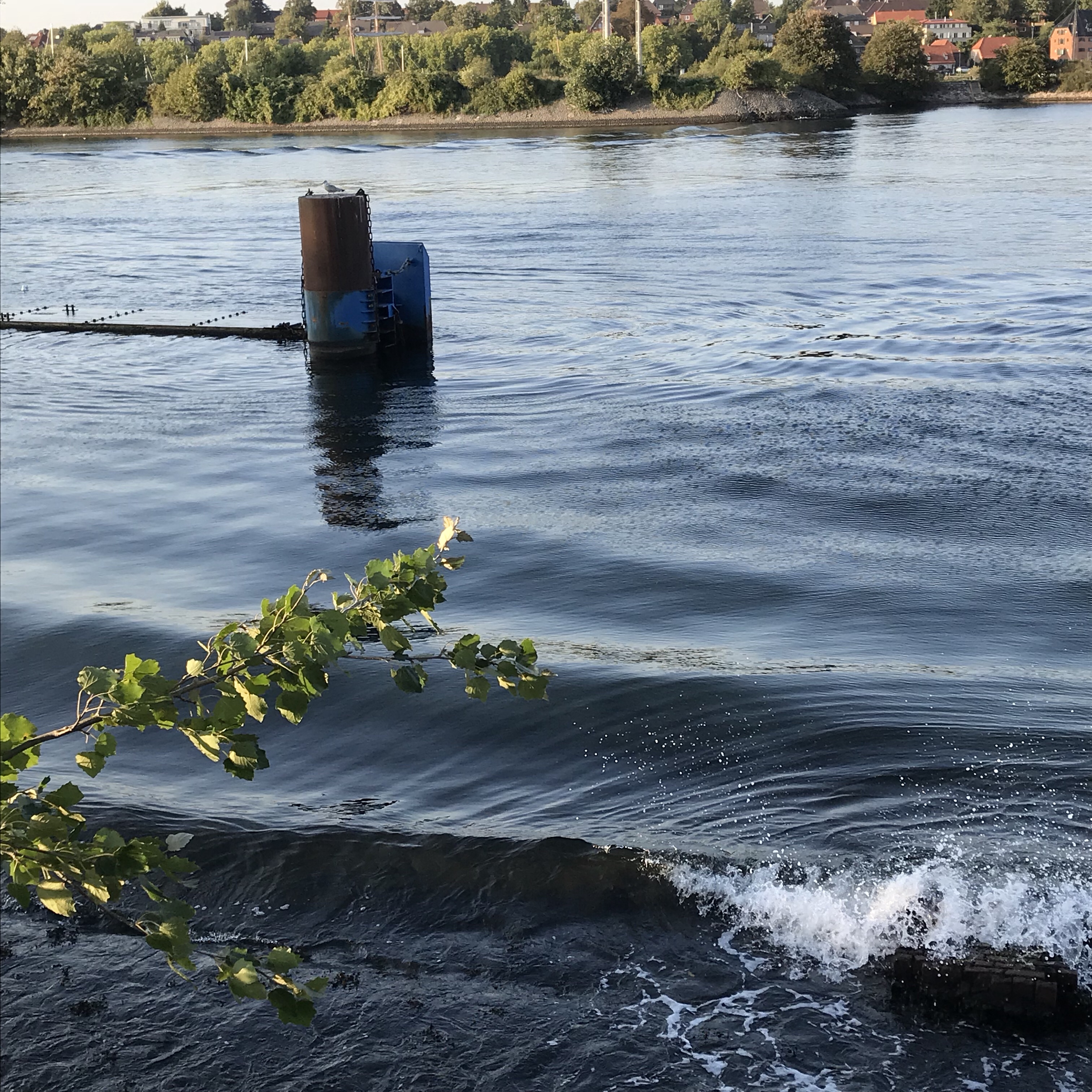 Related Posts to "Wave watching: Refraction and diffraction of waves":

1 thought on “Wave watching: Refraction and diffraction of waves”