When I go wave watching back home in Kiel, I tend to be drawn to other places than this particular one, but sometimes you find gold in the places you least expect it. And then, what is usually a really nice and easy to explain kind of wave — shallow water waves — acts up and becomes difficult. You win some, you lose some…

In these pictures, we see these very weirdly-shaped waves in very shallow water. When the water is shallow enough, waves don’t even have a “proper wave shape” any more, they look more like pool noodles that are being pushed towards the beach, but in a very inefficient, sideways manner. 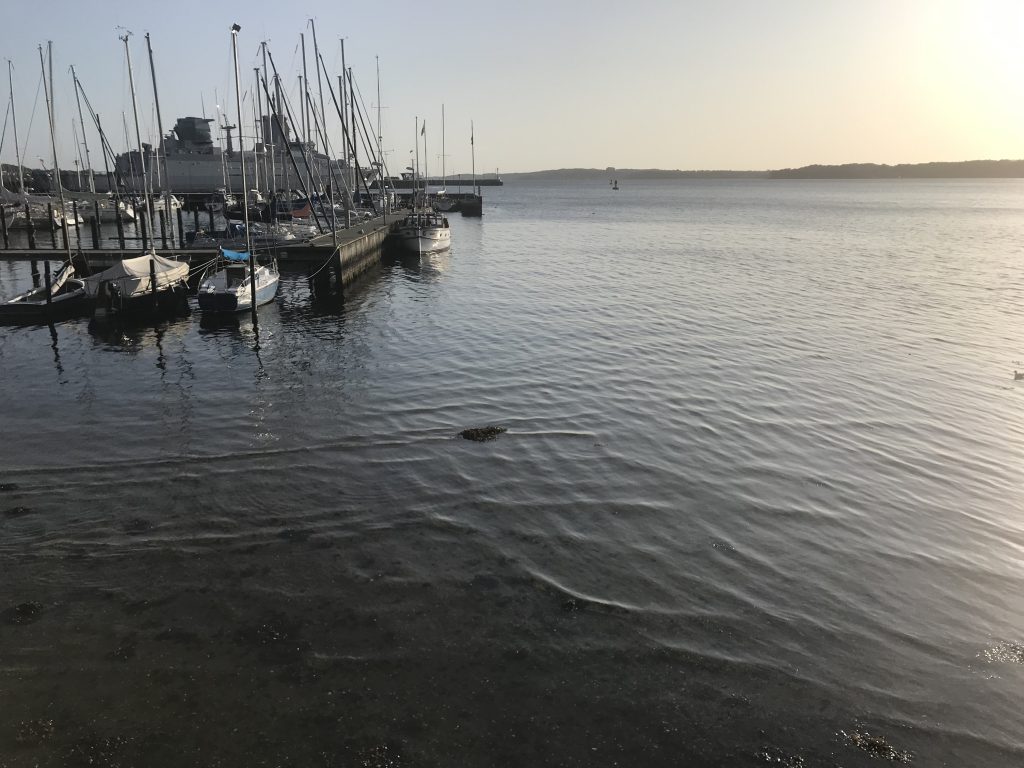 When the water is shallow enough, the waves also change their behaviour in that usually we can just add two incoming wave fields and get a good idea of what the resulting wave field will look like, but in very shallow water, things become very nonlinear and messy. 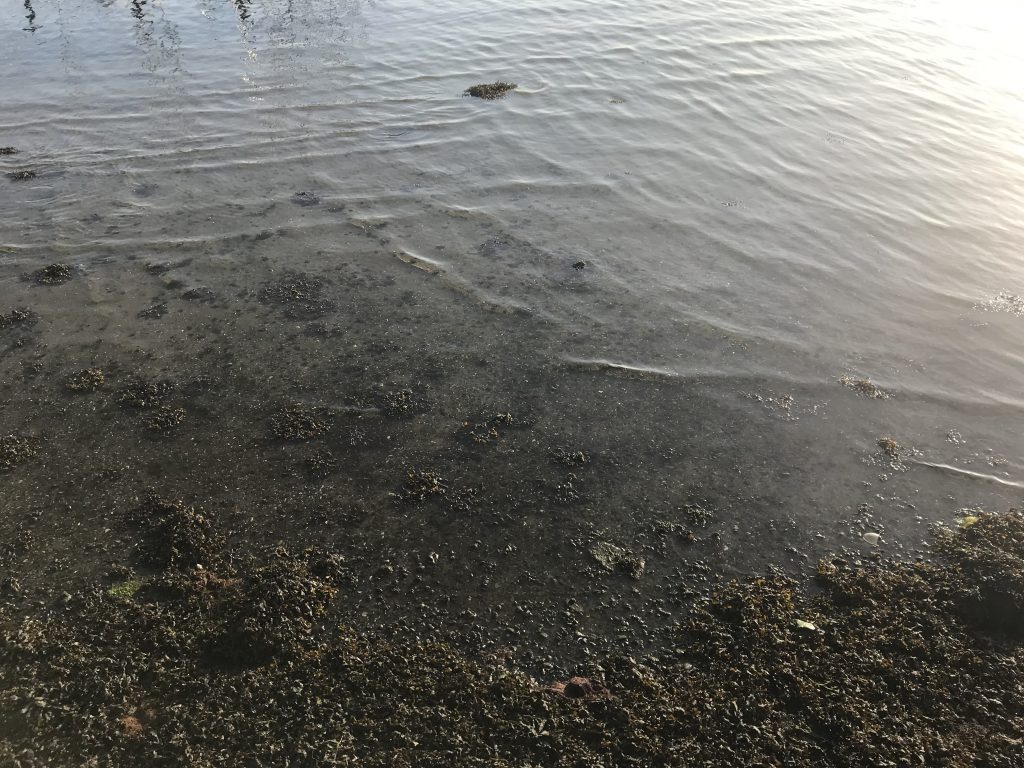 Do you see how wave crests seem to start clinging together, resulting in weird X and Y shapes?

Usually we can easily calculate the velocity of shallow water waves just from the water depth, but here in this picture, all kinds of weird and wonderful things are happening and I don’t actually have a clue what’s going on. 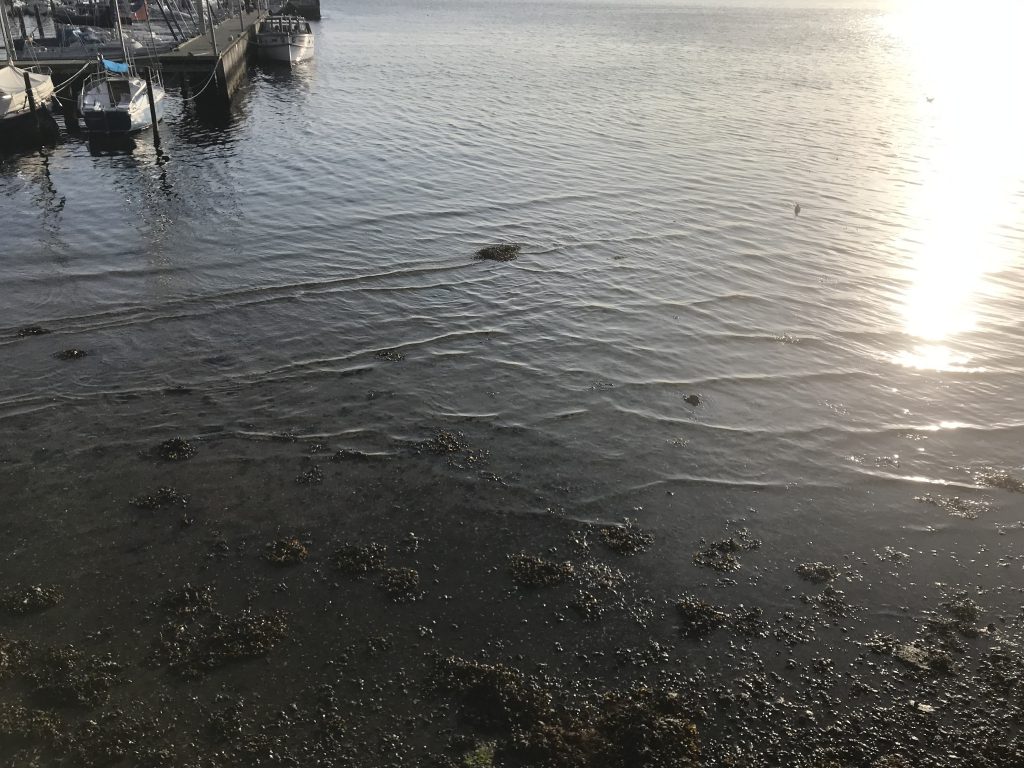 A little bit further along, some other surprising wave watching: A wake is running onto the shallow beach. 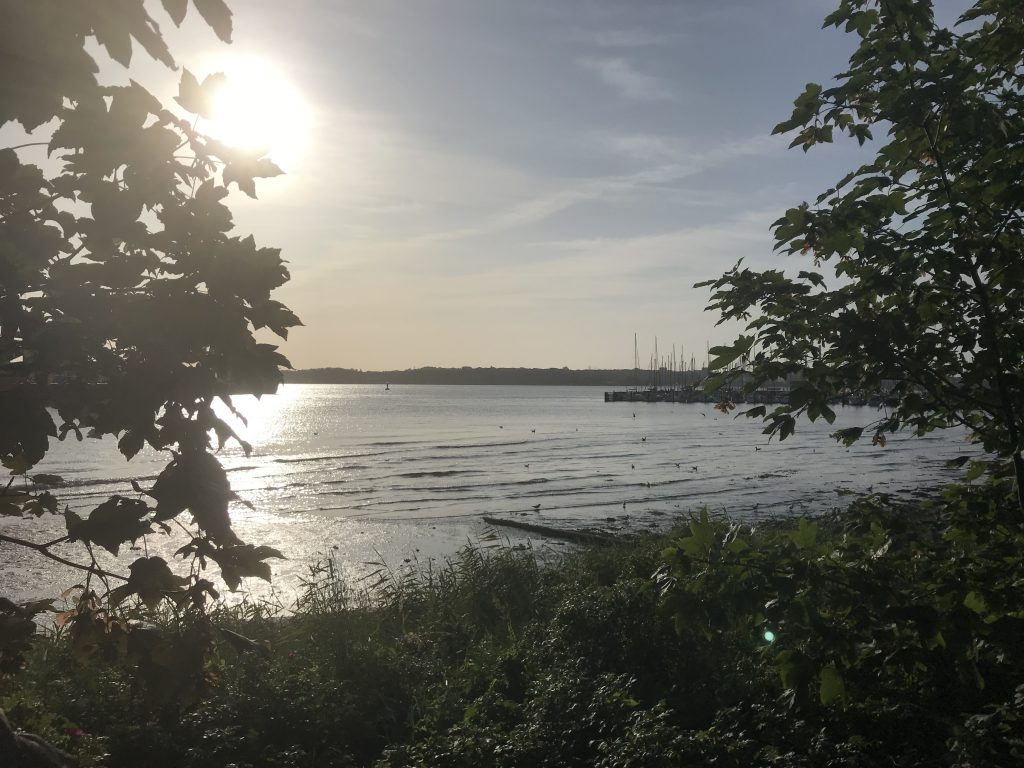 What i find really interesting here is the one long, straight wave crest that runs all the way across the picture, and then how different the waves look on either side of the draining pipe (actually, I don’t know what’s going into Kiel fjord there, although now I am curious…).

On the left side of the picture, the wave crest hits the shore and that’s the end of waves on that side. On the right side, though, wave crests continue on in shallow water for quite some time before they end up on the shore, and here we see how they get bent by the changing water depth (Remember? Phase velocity of shallow water waves should only depend on water depth, so the deeper the water, the faster the wave). The wave crests get slowed down a lot faster on towards the shallow water on the left than towards the deeper water on the right, thus the right side starts overtaking the left, bending the whole wave crest around. 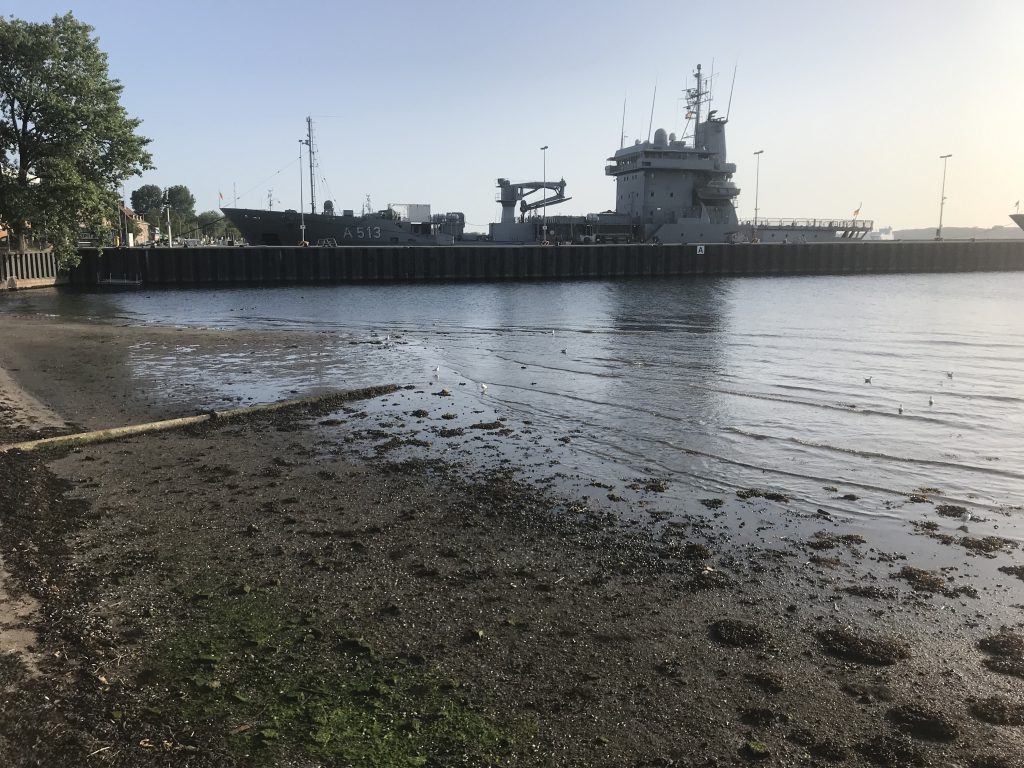 This is the blogpost I wanted to write today before I got distracted by all the adventures on MS Stadt Kiel with sightseeing and swing dancing and all the good stuff that wasn’t wave watching. I had even uploaded all the pictures of this morning’s wave watching walk on my blog already, but then things just got too exciting… But here we go now!

Here we see a really nice example of shallow water waves: The wavelength is a lot longer than the water depth and the shape of the waves looks very different from the almost sinusoidal waves in deep water: The troughs are very long and the crests short and steep. 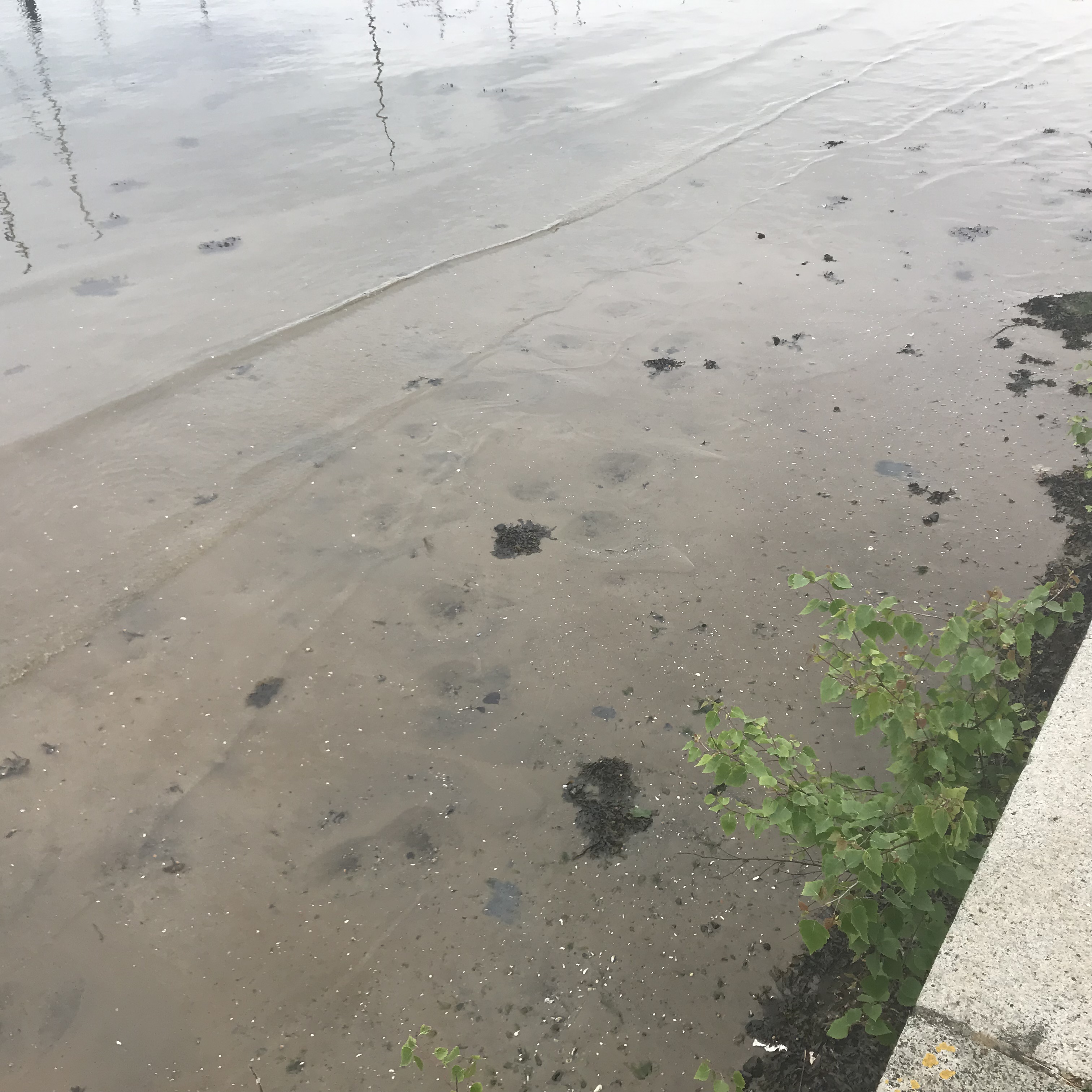 And here they show the influence of water depth on phase velocity: Where the water gets shallower and eventually the land falls dry, the waves get slowed down. This means the part of the wave crest that is still in deeper water is faster, overtaking the shallower part, and thus the waves get bent around, towards the shallower areas in the water. 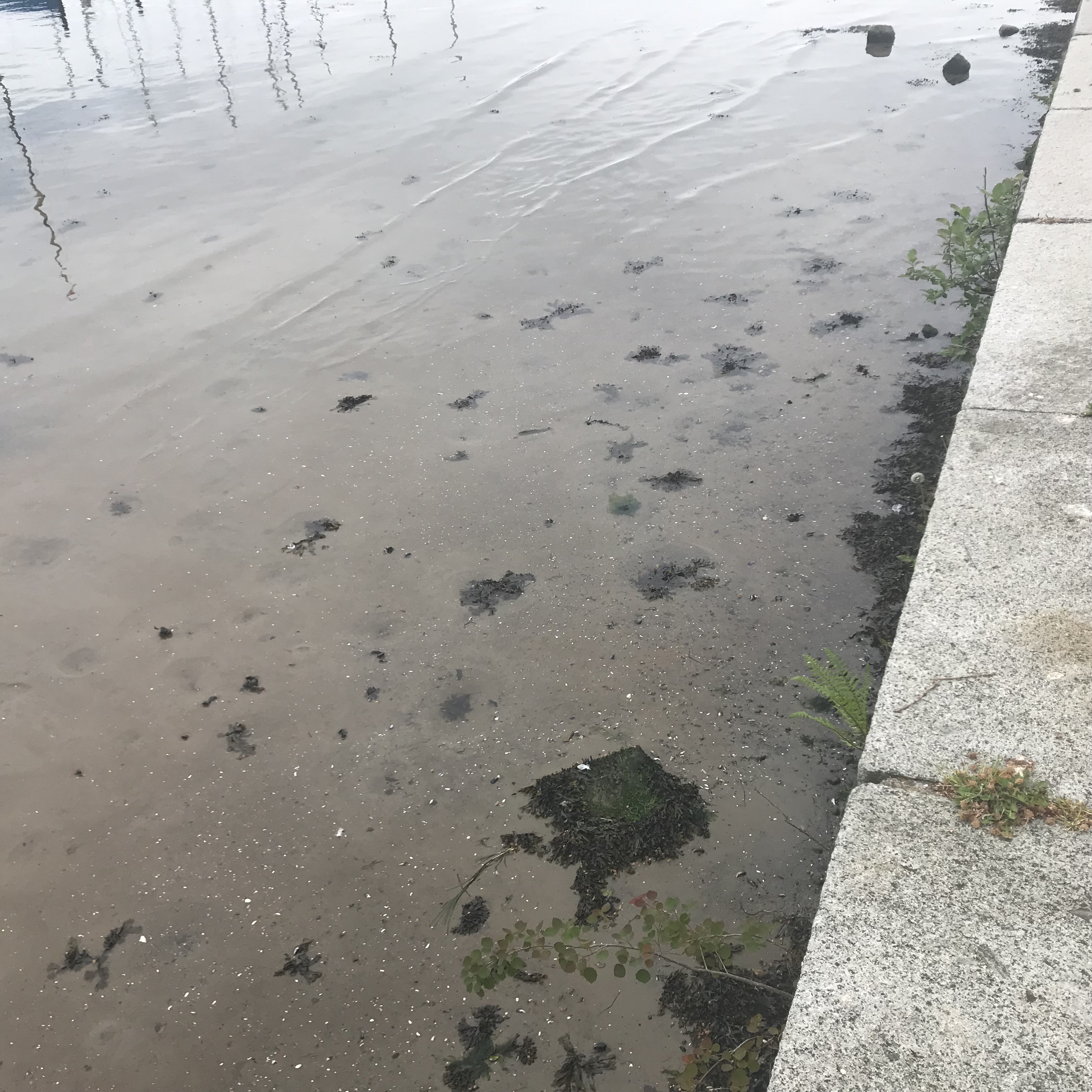 For comparison here the shape of waves in deeper water. Do you see how they are much more sinus-shaped? 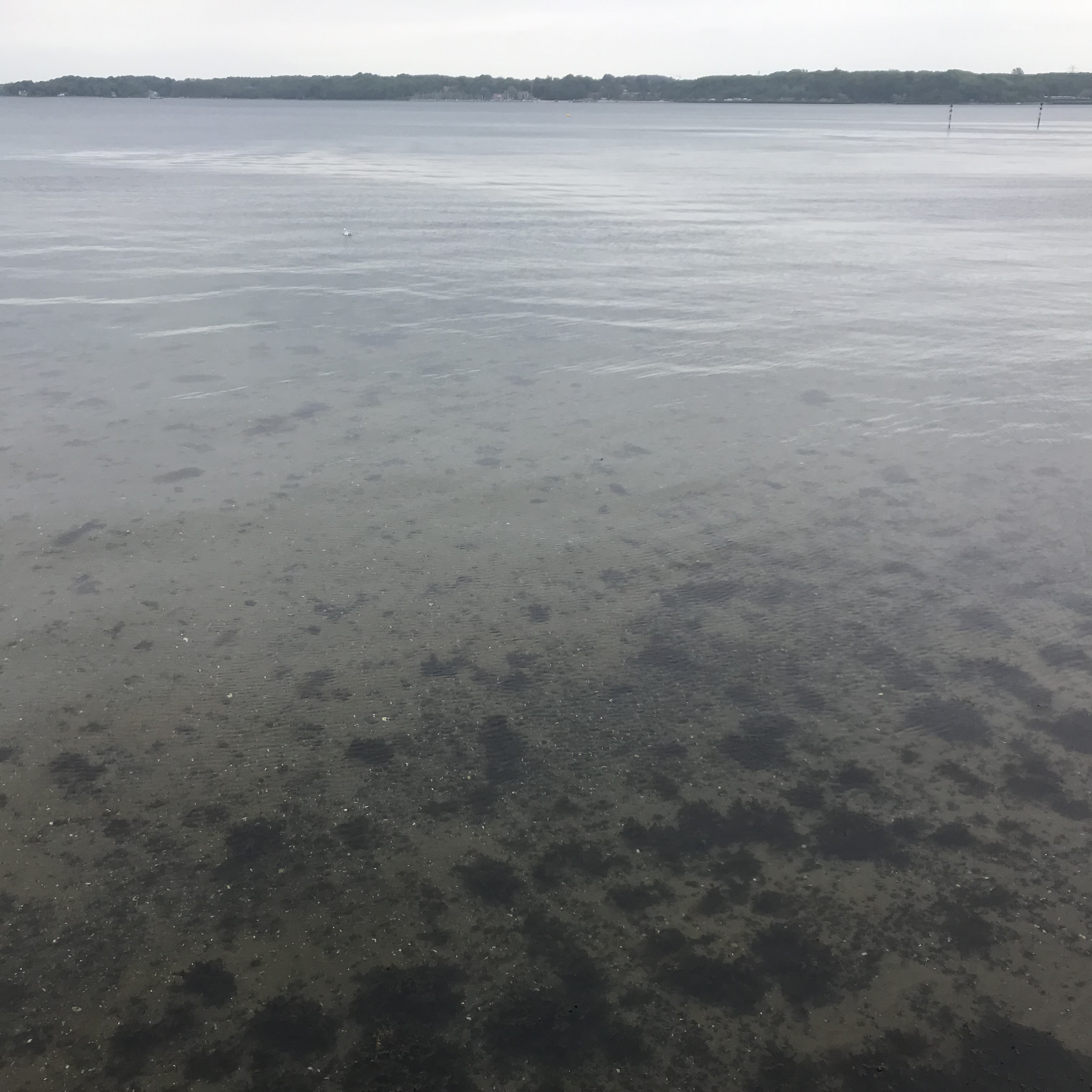 Above we also see fairly well how gusts of wind change the water’s surface roughness: where the water surface looks darker, it is covered in small capillary waves caused by gusts of wind.

Btw, if you were wondering where the longer wave length waves came from: They are the wake of a boat accompanying the training session of some race kayakers. 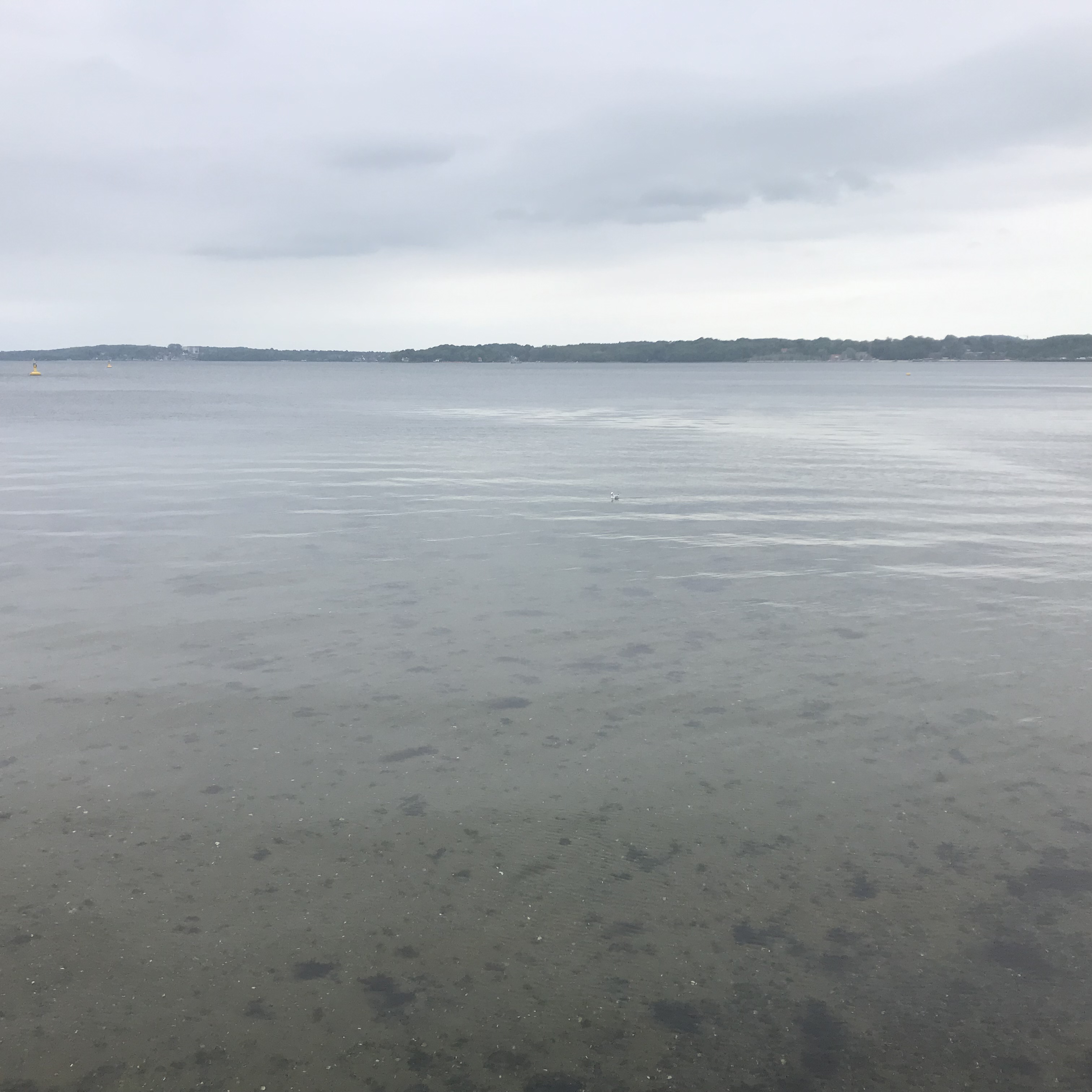 When those waves hit the sea wall, we see nice reflections and a checkerboard pattern! 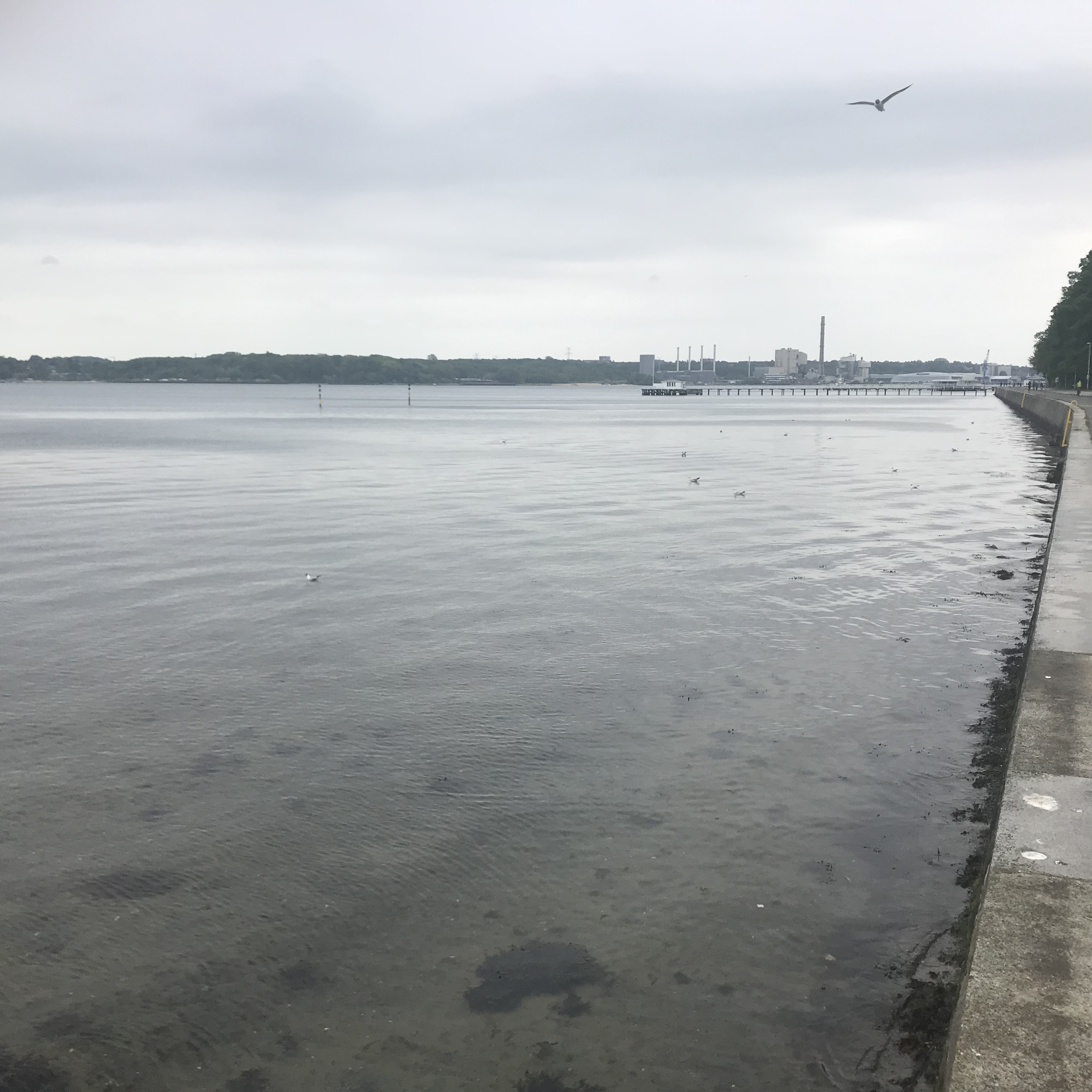 Btw, I find it super eye opening how the structures that, to me, absolutely dominate the picture above are not picked up as dominant in my comic app (see below). Of course the structures of the power plant or sea wall are more prominent, but the criss cross of the reflected waves is hardly visible. Maybe that’s how little it is visible to most people even in the photos? On my Instagram poll on whether comic-y-fying pictures helps to show what I am talking about, 60% of the responses were that yes, comics make it easier to see what I mean. Not quite sure yet what I will do with that information moving forward… 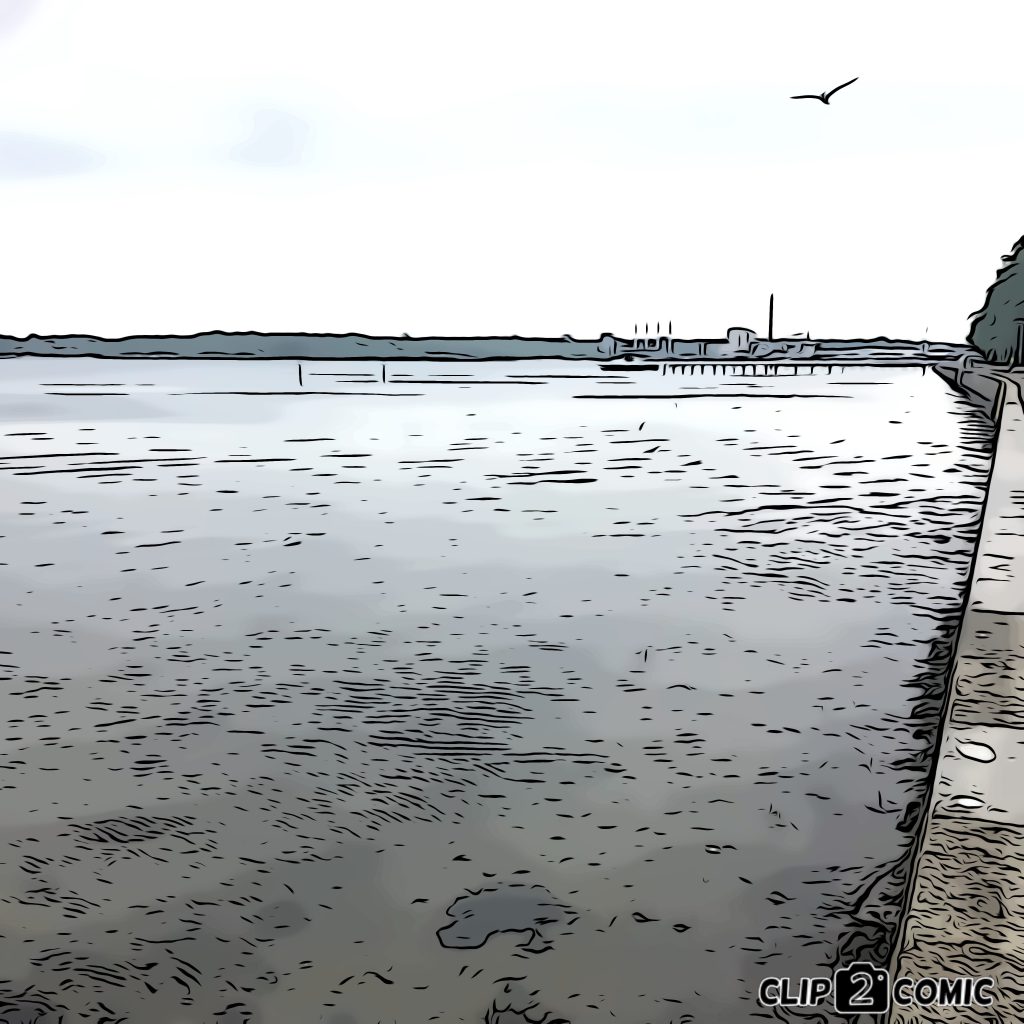 Something else really curious today, btw: The way the sea floor looked! Usually there are lots of ripples here, mostly parallel to the sea wall. And today these weird patterns of darker (finer?) sediment. I think I need to observe the sea floor more consciously to figure out what’s going on there! 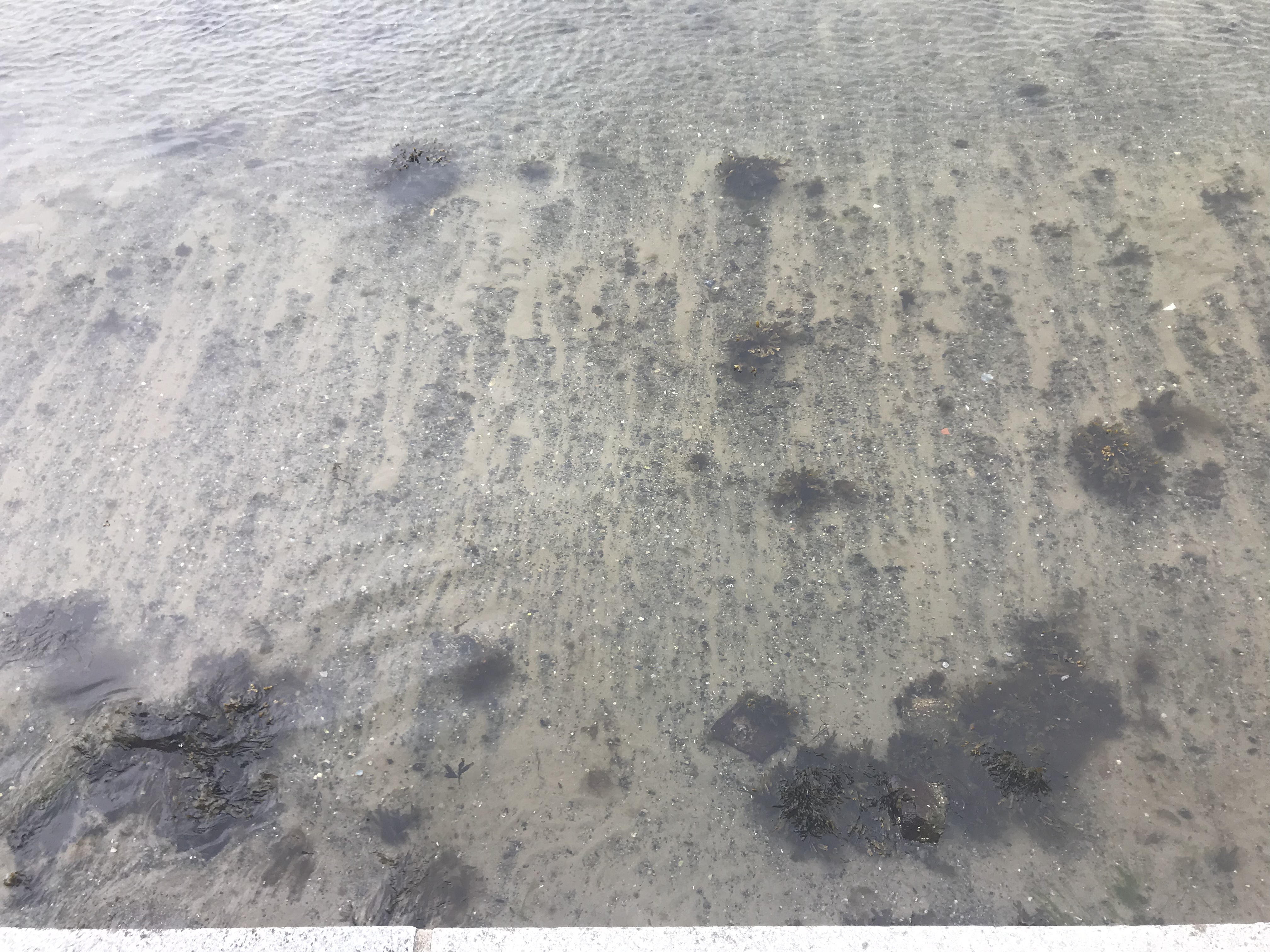 And now the race kayak and accompanying boat are coming back. I love how you see their wake and then that bird’s wake in the picture below! 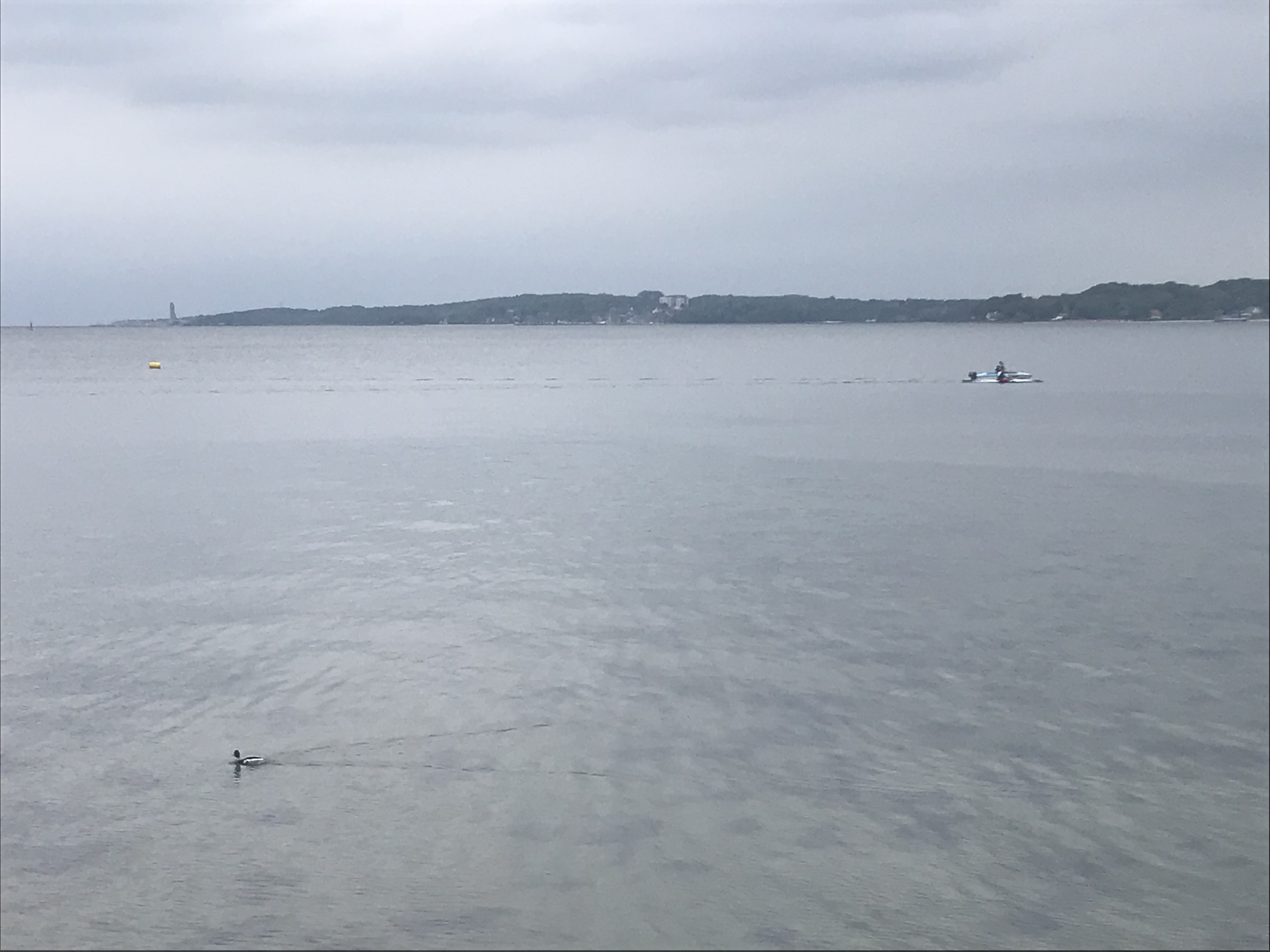 And then, finally, some larger waves, again the wake of some ship that I didn’t pay attention to. 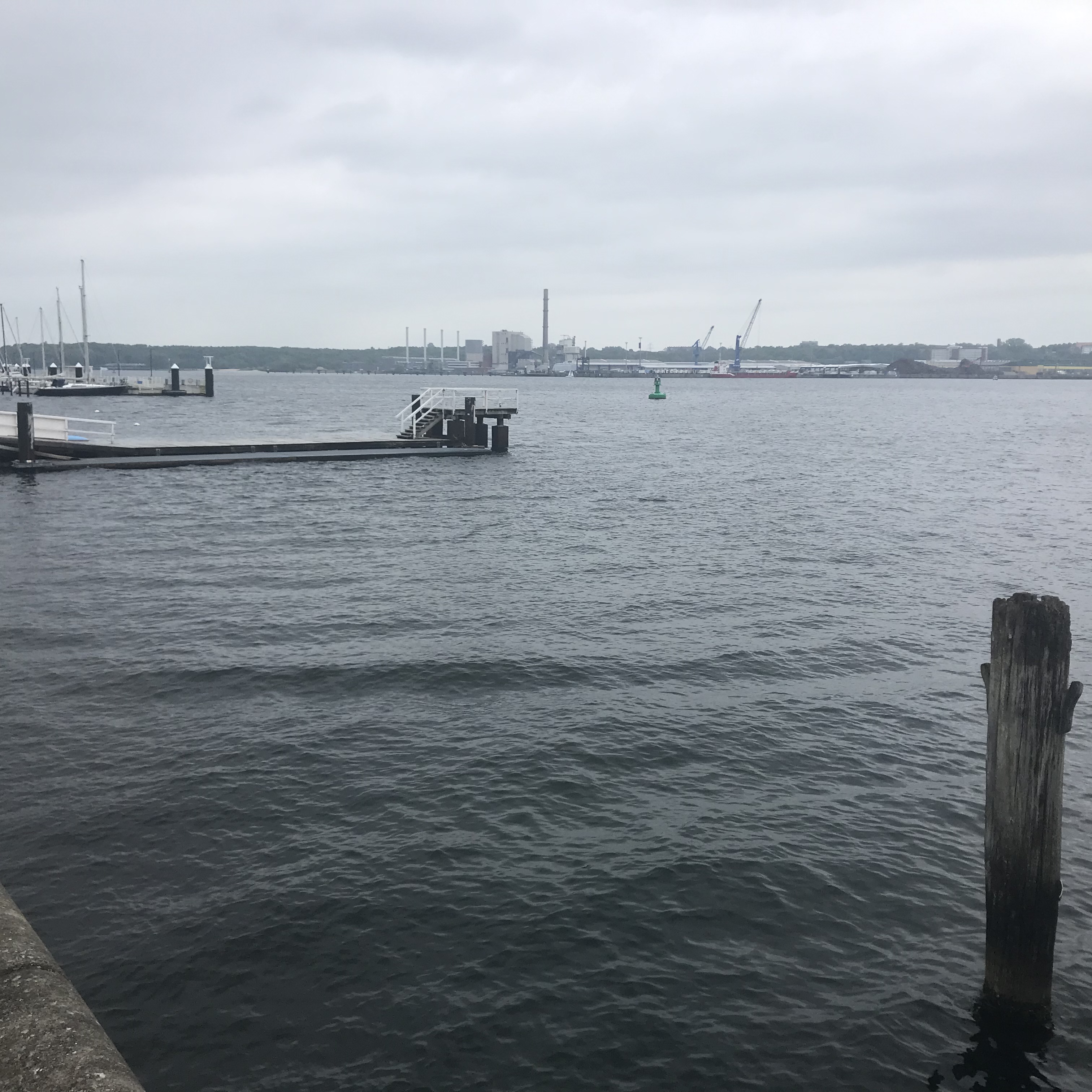 And sometimes, the reflections are just suuuuuper difficult to see when you don’t know what you are looking for. Do you see them in the picture below? 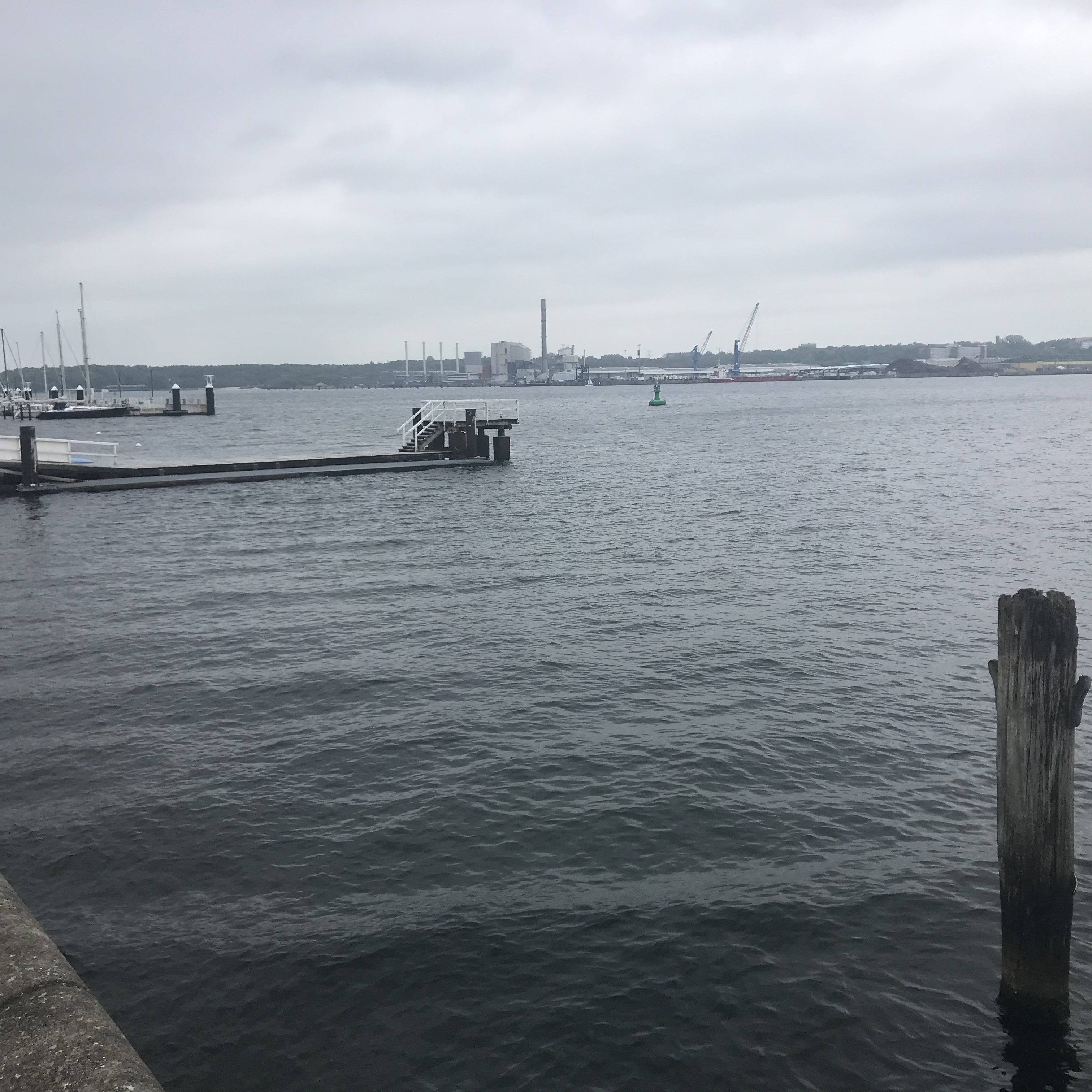 Have you ever noticed how, if you are at a shallow beach, no matter how choppy waves are further offshore, everything becomes nice and orderly on the beach? Funny that in all these years of wave watching, I have never thought about that before!

Watch the movie below to see for yourself

Do you know the feeling when you, even on the most beautiful of days, want to get out of the pretty parks as quickly as possible so you can finally see the water? And it is so worth it, there is always something to see. For example on that day: what a nice field of shallow water waves! And what an awesome criss-crossing of waves being reflected on the sea wall on which I was standing when taking that picture. And how sad that this lake was frozen over! :-) P.S.: Still looking for a christmas present for your nerdy friend, your niece, anyone who should spend more time looking at water? Check out my book :-)

Earlier this year at Forscherfreizeit Ratzeburg – the summer camp at which Conny, Siska, Martin, a bunch of teenagers and myself spent a week sailing, exploring and playing with water – I spent a good amount of time staring at waves hitting the wooden boards that form the slip in the port. They create a nice slope with a very interesting structure, especially at the joints where the angle of the slope isn’t exactly the same.

Watch what happens when the wave approaches the shore (and focus on the left part of the picture, where it is clearer):

At first, it arrives pretty much as an ordinary wave. As it is running up the slip, you start seeing the structure of the boards below. As the wave becomes steeper and steeper, the front one is being slowed down more than the second one, because it is in shallower water (and we all know that the phase velocity of shallow water waves depends on the water depth, right?). Eventually, they form one steep wave and break. Watch the movie to see it happen:

For more waves on a slope, check out these posts (Norway, Hawaii).