After spending a good chunk of yesterday afternoon transferring #WaveWatching pictures from my Instagram into a blog post here, and wondering why I did not bother to write better captions for all the cool pics I’ve posted, I thought I’d go back to my roots and start with, at and for my blog. And if I transfer stuff to Instagram later — even better!

So since I have the time and enjoy this stuff: Here are this morning’s pictures! 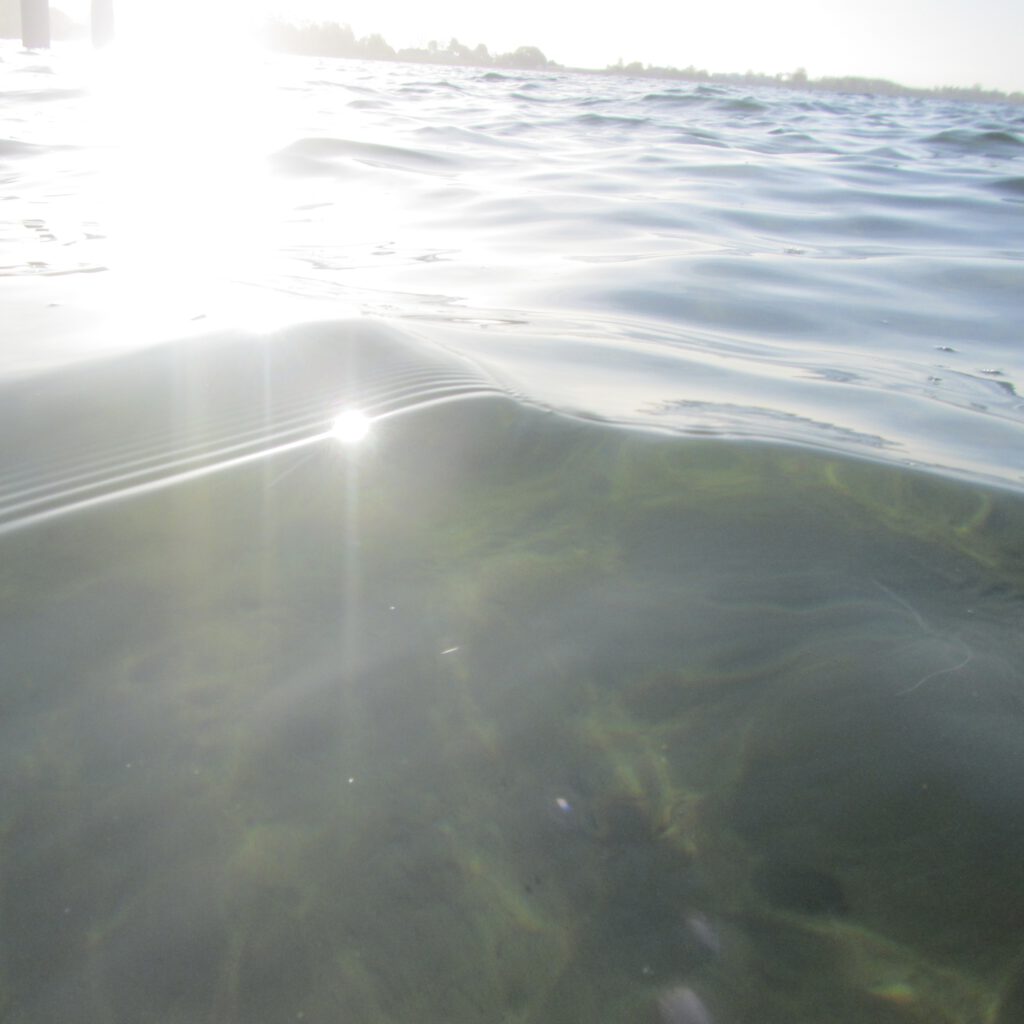 I really enjoy morning swims, especially when the sun is still low(-ish)! Here the sun’s reflection nicely highlights a group of capillary waves travelling away from us (probably caused by me moving in the water). One really interesting thing about capillary waves is that they behave differently from “normal”, longer waves: the shorter the wavelength in a capillary wave, the faster it travels! That’s why we see the one large wavelength-large amplitude wave on which the sun spot sits, and in front of it several parallel waves that are progressively getting smaller and with shorter wavelengths. Capillary waves, in contrast to “normal” waves, aren’t driven by gravity as the restoring force, but by surface tension. That’s why they are only a few cm long at max. I really enjoy how they always look so neat and tidy on top of a much more messy wind-driven wave field! 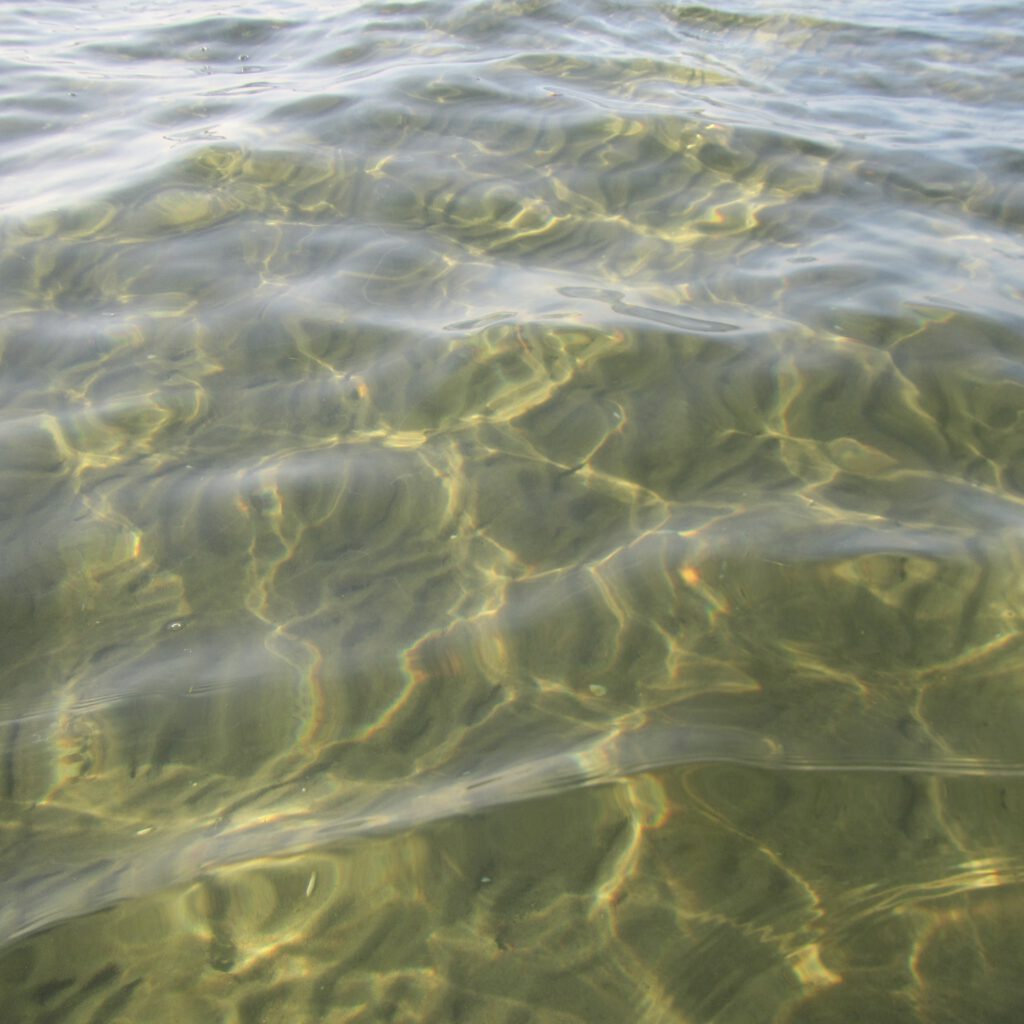 A couple of days ago, I commented on how the ripples on the sea bed were much more pronounced on a more windy day. Same thing today: Look at how they are several cm high in about maybe 70 cm water depth! 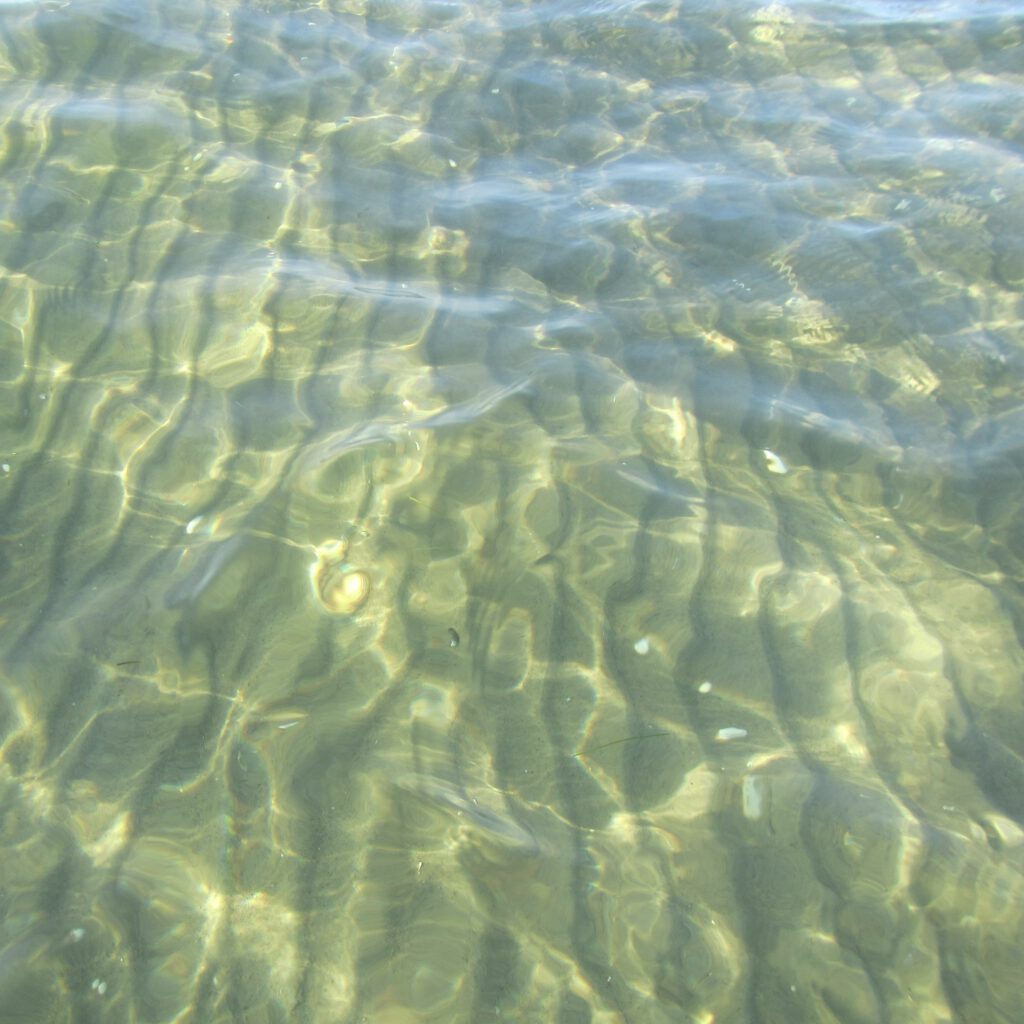 One thing this picture shows really nicely is also the problem that comes with interpreting these kinds of pictures: We see (at least!) three different pattern at once: 1) The waves on the water surface that show up as the reflection of the sky the shallower the angle we are looking at the water surface at is (but that, on the other wave slope don’t show up and let us look into the sea). Thanks, total internal reflection! 2) The light pattern on the sea floor where the sun is focussed and defocussed due to the shape of the sea surface that acts as a lens: rippling caustics. 3) The actual shape of the sea floor, the sand ripples 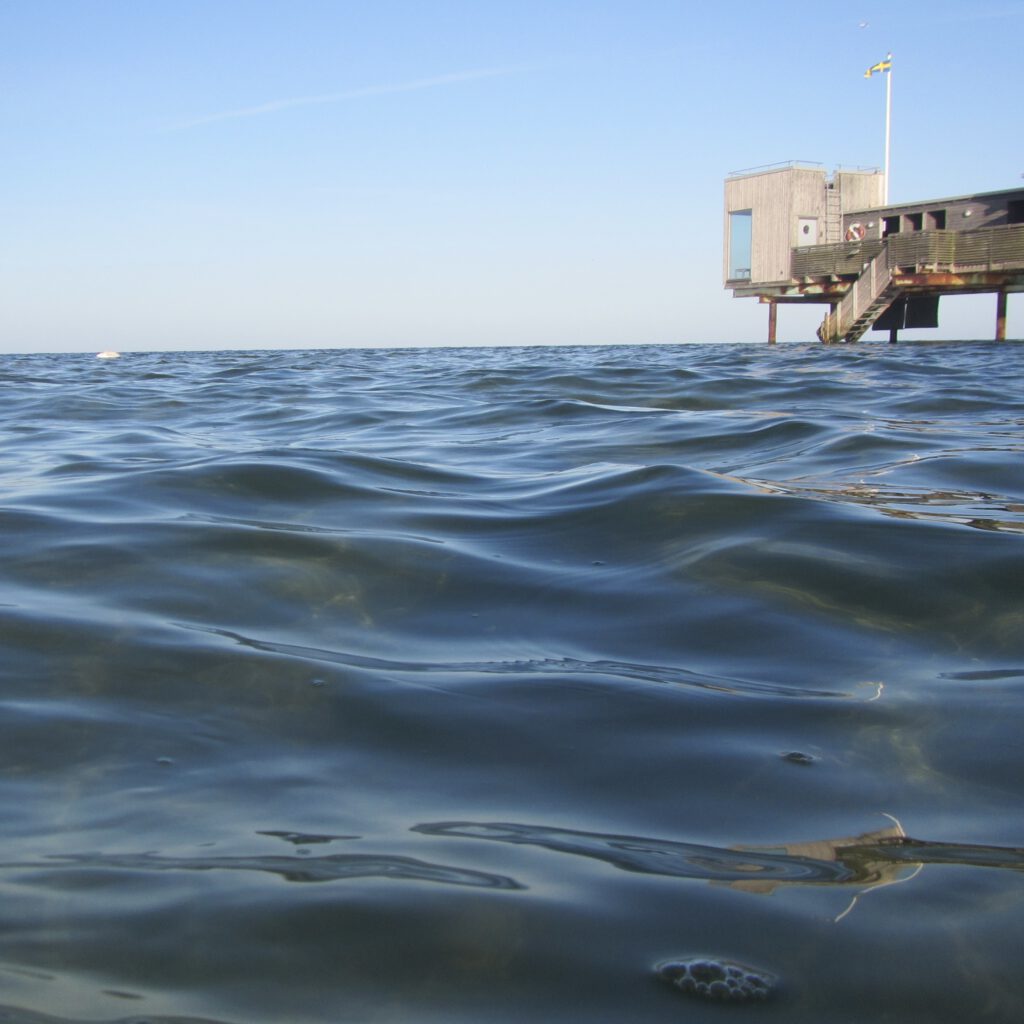 This is my new morning bath spot, and I have to say that I love it! First, it’s at the end of a 500m pier, which is awesome in itself for any wave watcher. Then, there are pigeon hole type shelves so my stuff stays put and doesn’t get blown into the sea. And then nice and clean and sturdy metal staircases leading into the water that is bio-free enough to see where you are stepping. And already after a week, a community of morning bathers who recognize me and comment about the weather and how morning baths are the best start into the day. I did not think that there could be another place as awesome as Seebar in Kiel, but I have to say that for as long as I can’t be in Kiel, this is a worthy replacement! 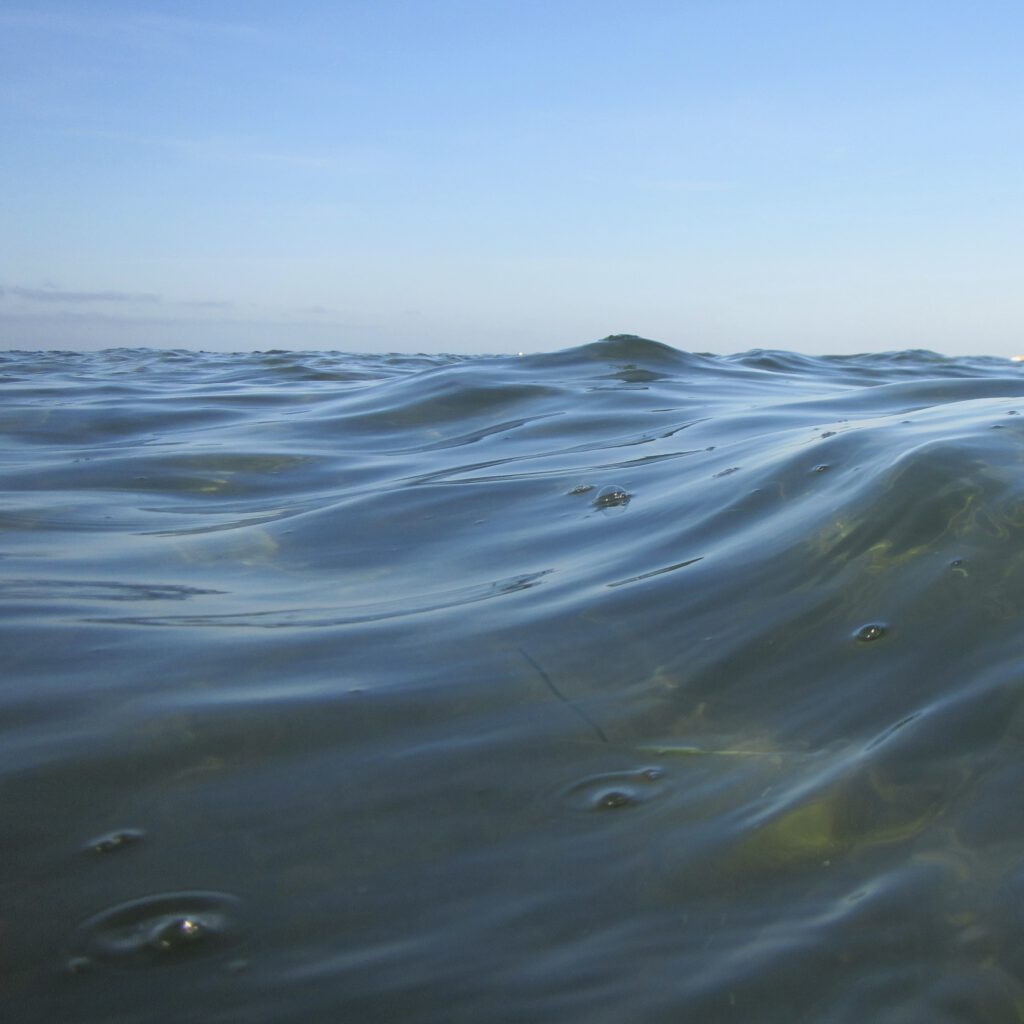 What I enjoy most about swimming is the change in perspective, and being able to look at waves from really close up. Aren’t the shapes just amazing? And I am so fascinated by how everything about water changes depending on the angle I’m looking at it (so whether I can look into the water or just see reflections of the sky), and also which direction I’m looking at relative to where the sun is (so whether there is sun glint), where the open sky is (so what colour the surface appears to be), where the wind is coming from (huuuugely important for what shape the waves seem to have, because you are either looking towards the steeper leading edge, potentially up breaking crests, or along the shallower back slope). And then, of course, all of this is ever changing, not two seconds will ever look exactly the same. It’s a wonder I get out of the water and stop taking pictures! (Well, maybe not that big of a wonder — it’s still not all that warm…….) 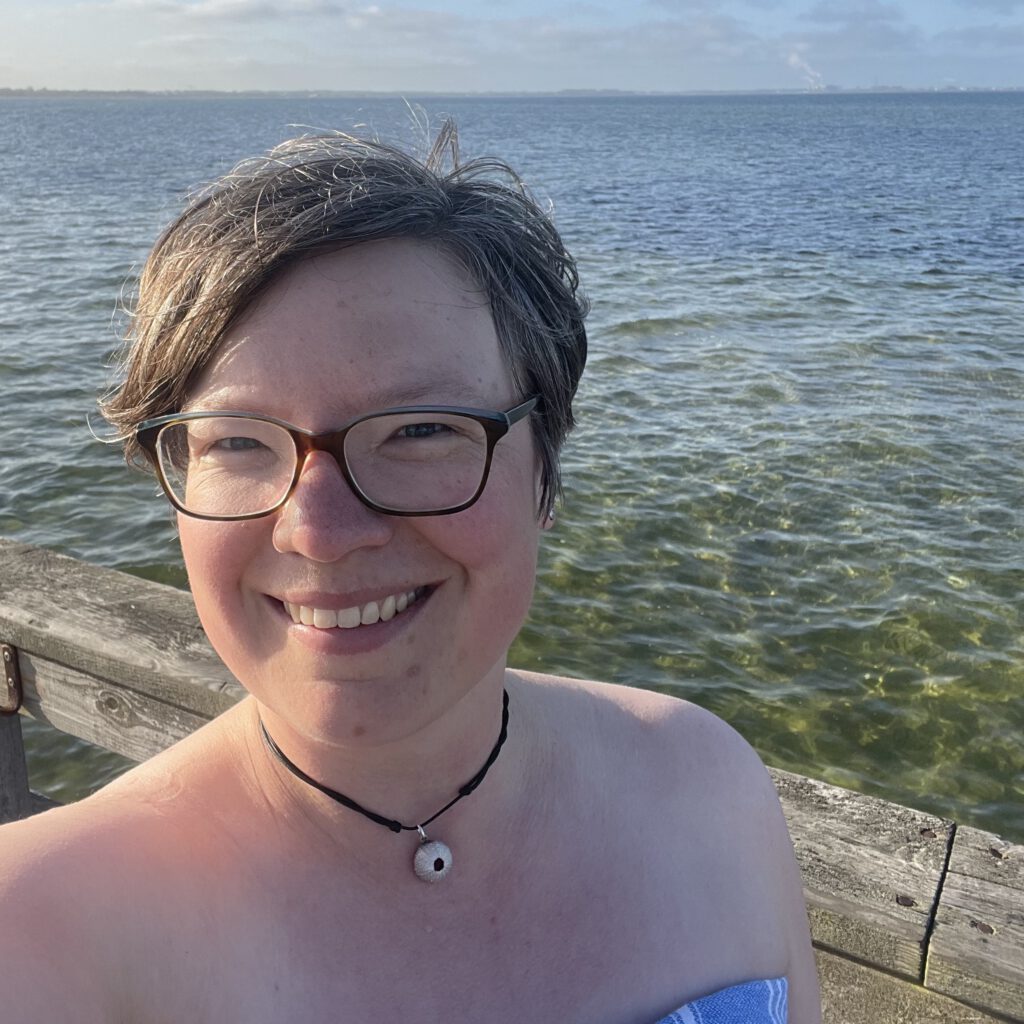 Hello, my name is Mirjam and I am addicted to #ColdWaterTherapy. It really makes me sooo happy every day! 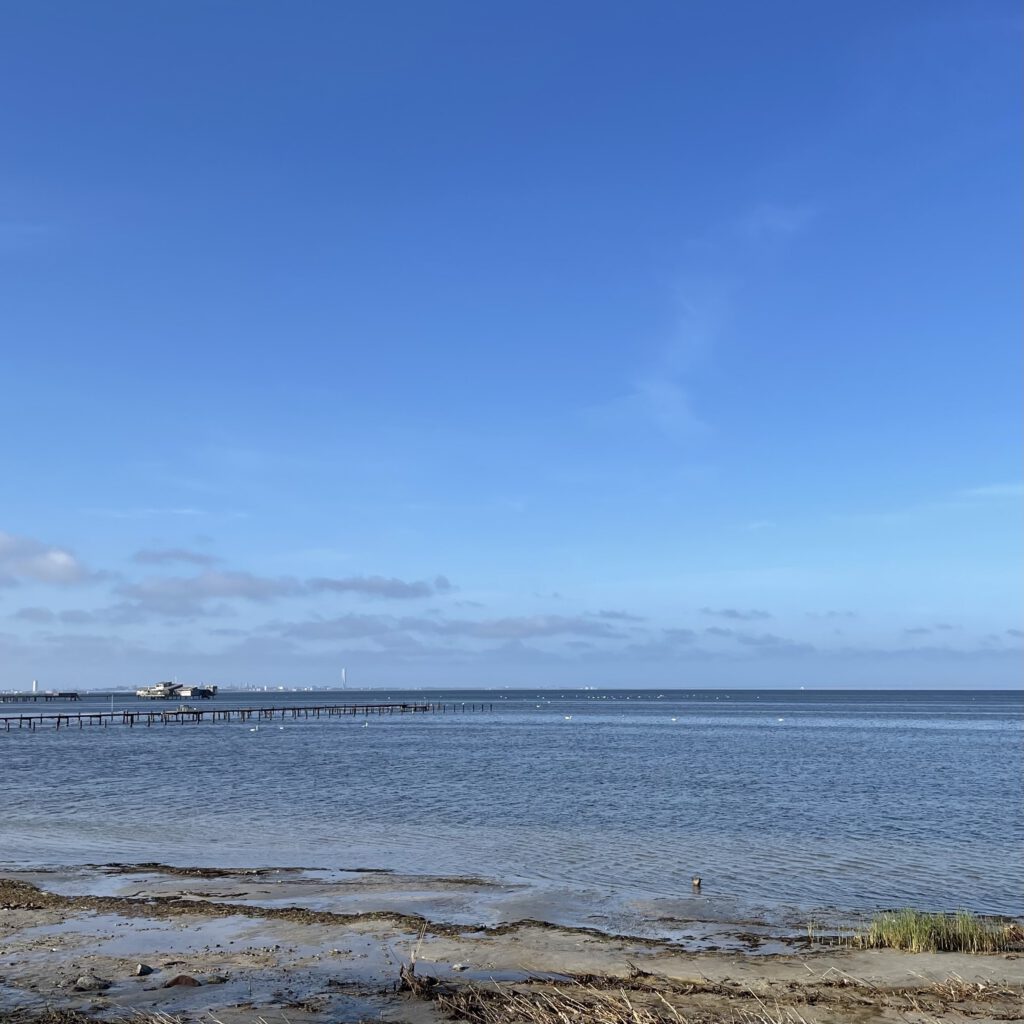 Ok, and now on to some serious #WaveWatching. I was sitting on a deckchair on the beach, enjoying the sun and my coffee and talking to my parents on the phone, and then I spotted the wave pattern you might or might not be able to see (but it will become clear over the next couple of pictures).

See all the waves that come across Öresund? And then how something suddenly hapens at some distance from the beach, where some waves start travelling in a different direction, more parallel to the beach (so their crests perpendicular(ish) to the beach)? (Also, please admire some leftover sand ripples on the beach! Such a pretty contrast to the waves in the sea!) 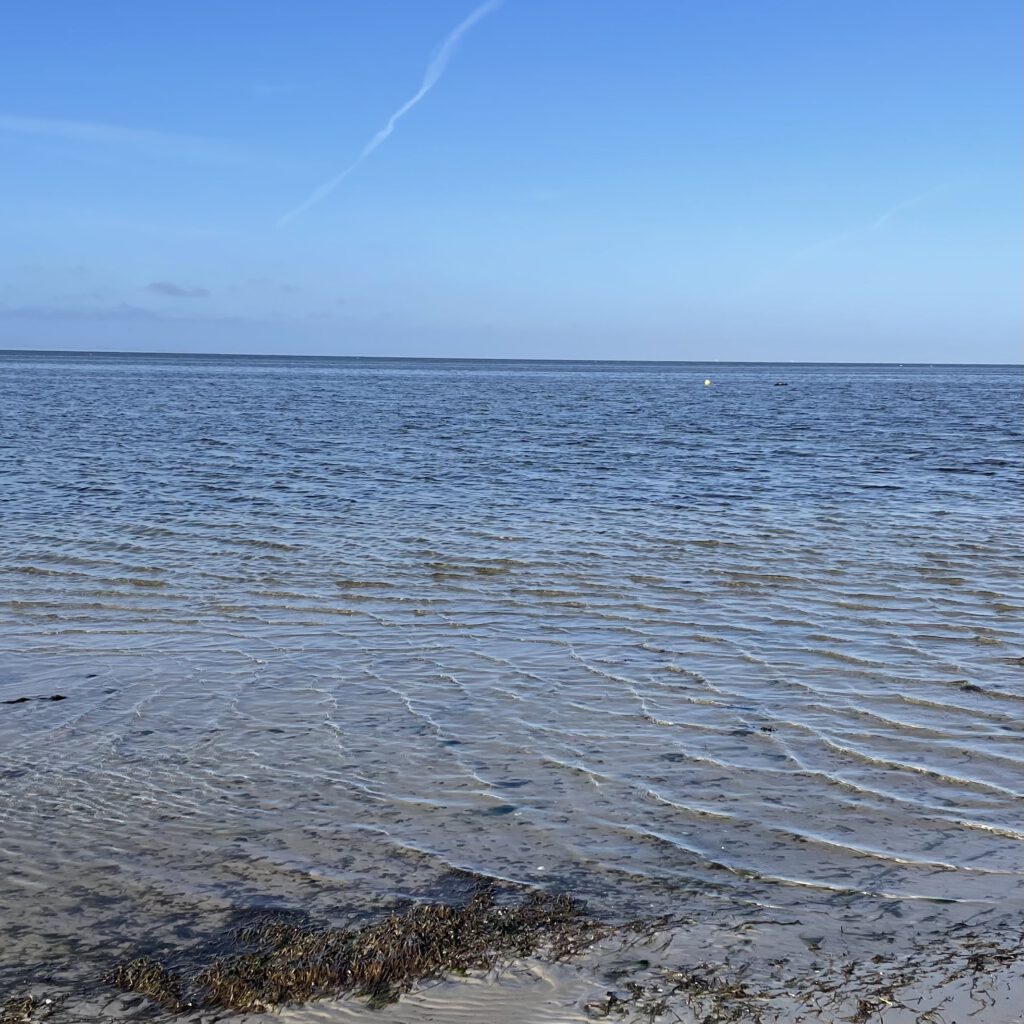 If we look a little bit further downstream, we see that there is a sand bank maybe two meters from the water line, and that some waves are propagating around it on the landward side. The sandbank is a little bit submerged, which is why the wave crests are curving in that direction, too. 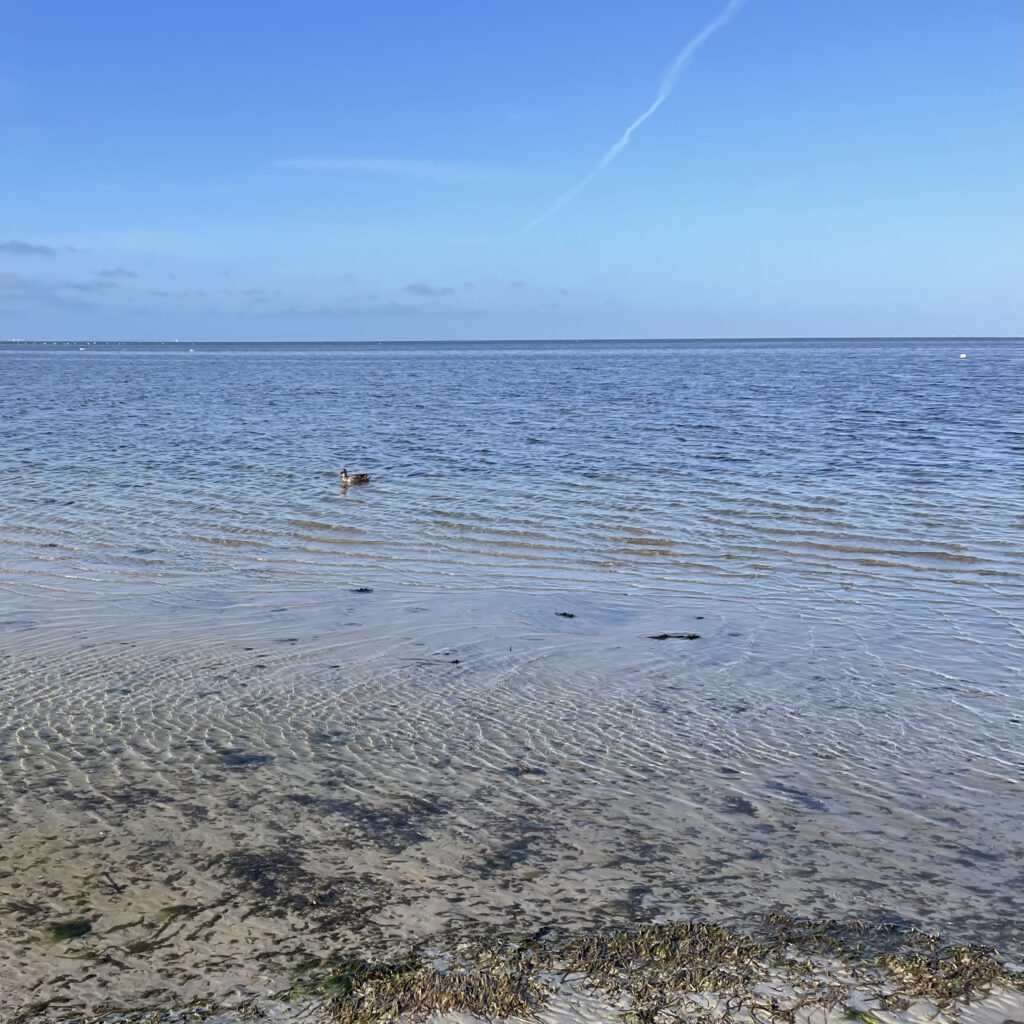 And here, a little more downwind, we have the two regimes: The wind waves, still being forced by the wind, running onto the sand bank (steepening up as the water gets shallower), and then the old wind waves running around the sand bank, now not in wind direction any more, and with a much smaller amplitude. Love how the wave crests are curving towards the shallower water on either side of the channel landwards of the sandbank!

So that was my Sunday morning wave watching! :)