Yay! Another recap of my wave watching Insta!

The year started off in the very best company — watching ships and waves and flowers with Astrid! 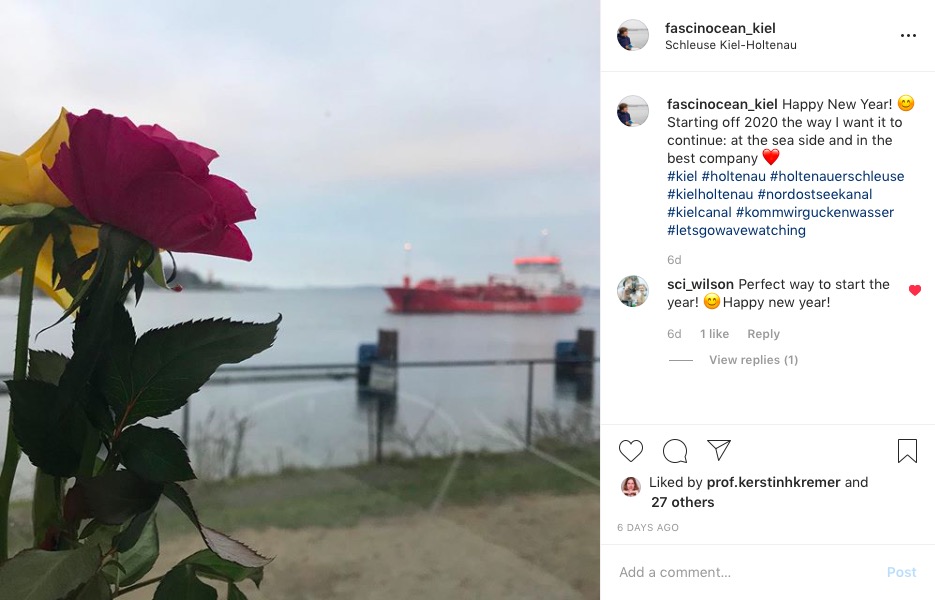 But of course there is also actual wave watching happening: Here we see a ship’s wake arriving. I find it fascinating how there are the stripes where you can look into the water and then those where you can’t! Total reflection in action. When I learned about that in physics class I never thought that was a phenomenon I would ever see in real life! 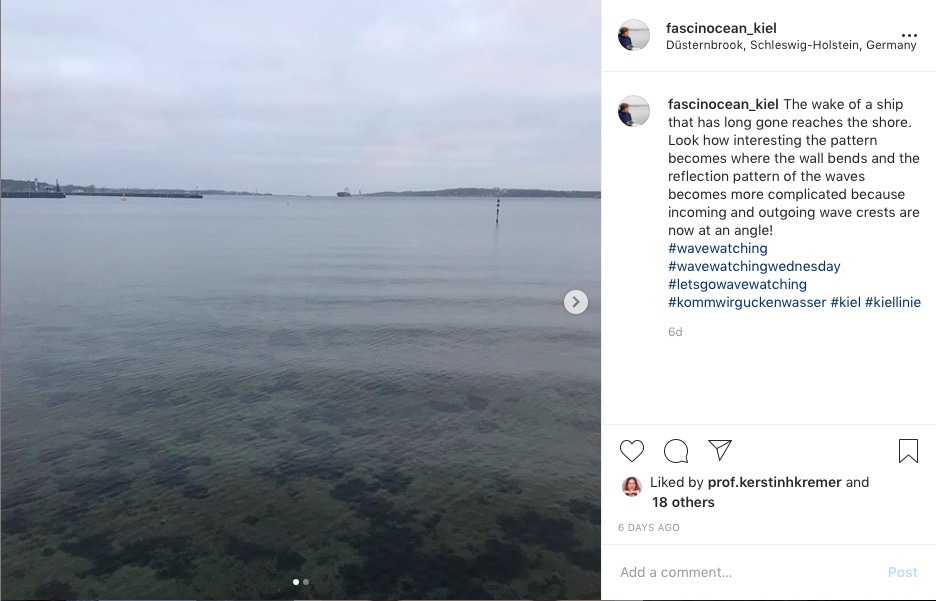 When the waves from the picture above meet the curved sea wall, they get reflected into this pretty pattern. 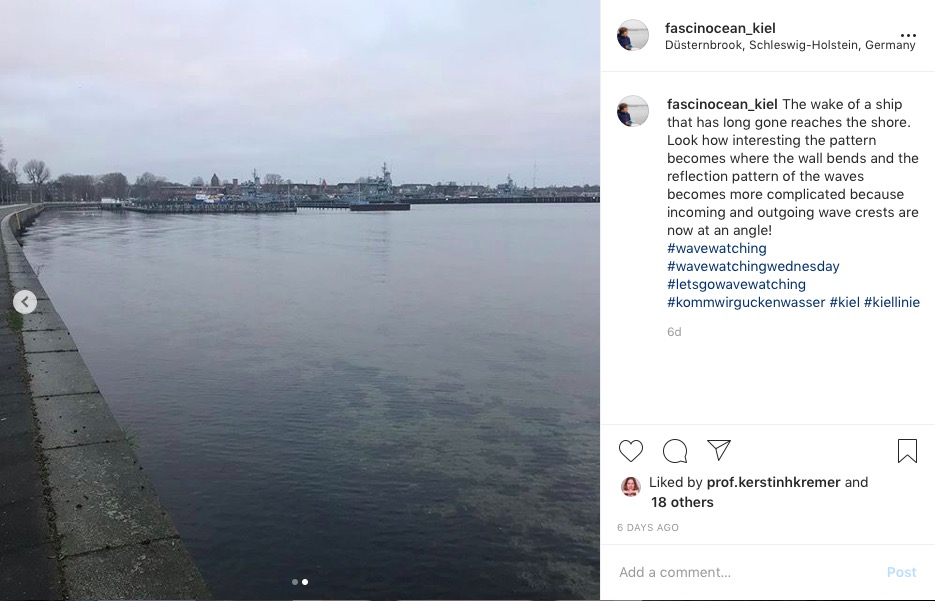 Another day, foggy and very windy! That day,  my focus was on how there are no waves in the lee obstacles. Only after sufficiently long fetch do waves start to grow. 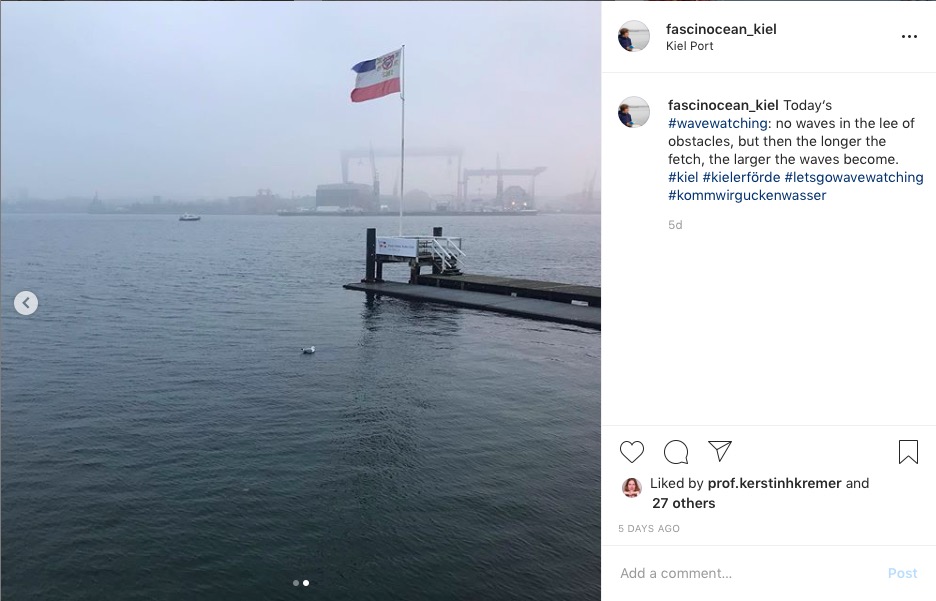 See how the surface roughness changes with distance from the obstacle? 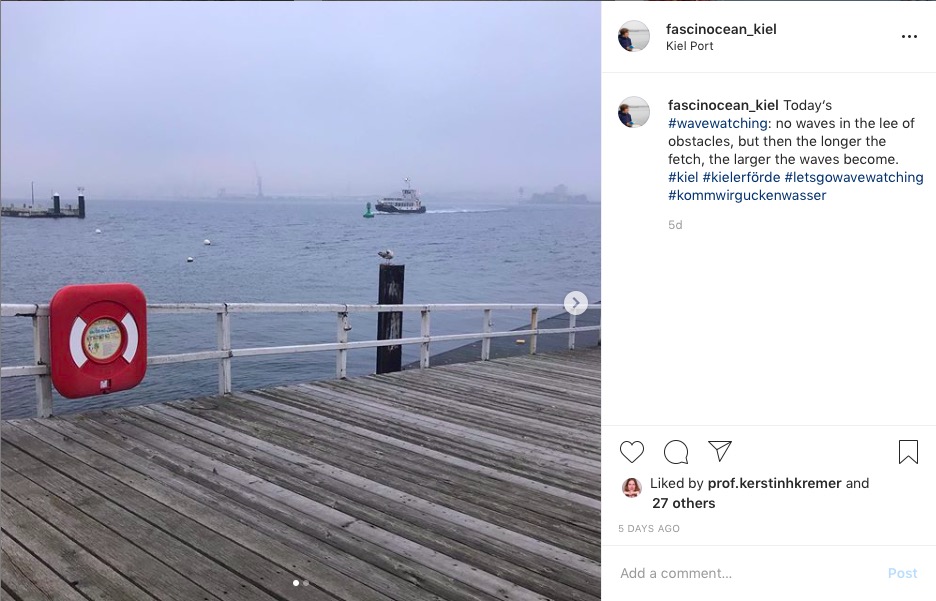 Oh, and then there was a sunny day! The Oslo ferry is leaving in the distance. See the stripes in different blue tones? In the foreground you can see how the colors are related to surface roughness. Areas that are more exposed to wind are rougher with more waves and different wavelengths, and look darker. More sheltered areas in the lee of structures have fewer waves and appear in a lighter blue. 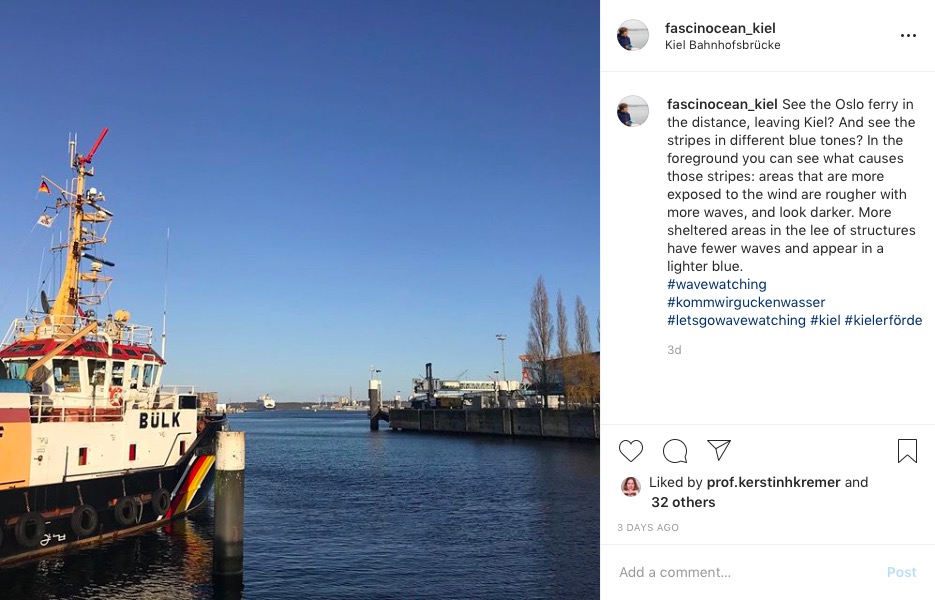 Oh, and then I had a great day with my nephew in the port of Hamburg with harbour boat trips, walks on the beach, and tons of wave watching. He was very impressed by my skill to know how far each wave would run up the beach, especially since we saw lots of people who either ran away screaming or got wet feet :-D 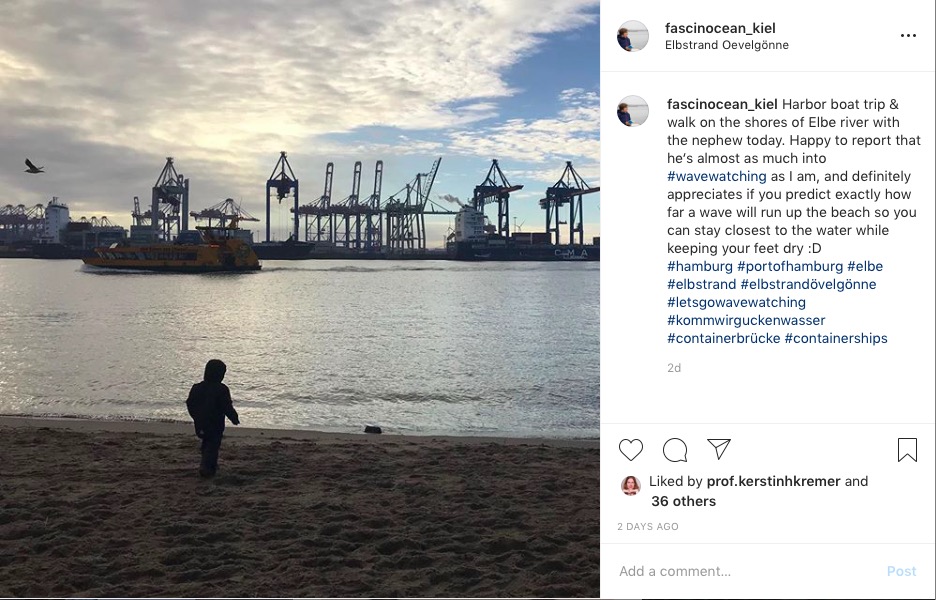 Another picture from the same day with my nephew: Here is a wave train from a ship’s wake arriving at the beach. I love watching this kind of stuff! 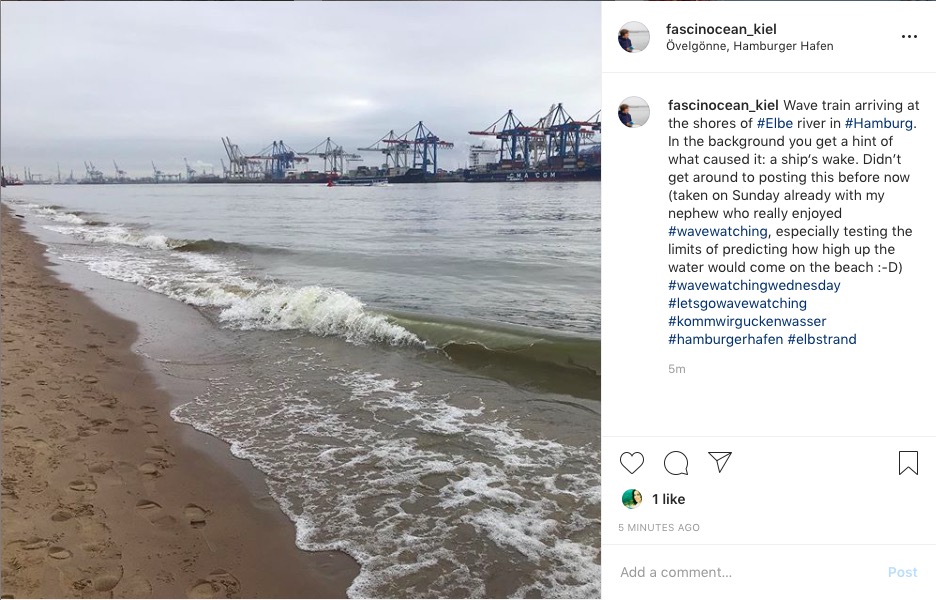 And then one day, I went#WakeWatching! On all three pictures below, you see waves made by the same little ferry. On the right is the turbulent wake where the ship just moved through the water, and on the left some of the feathers that form the V. 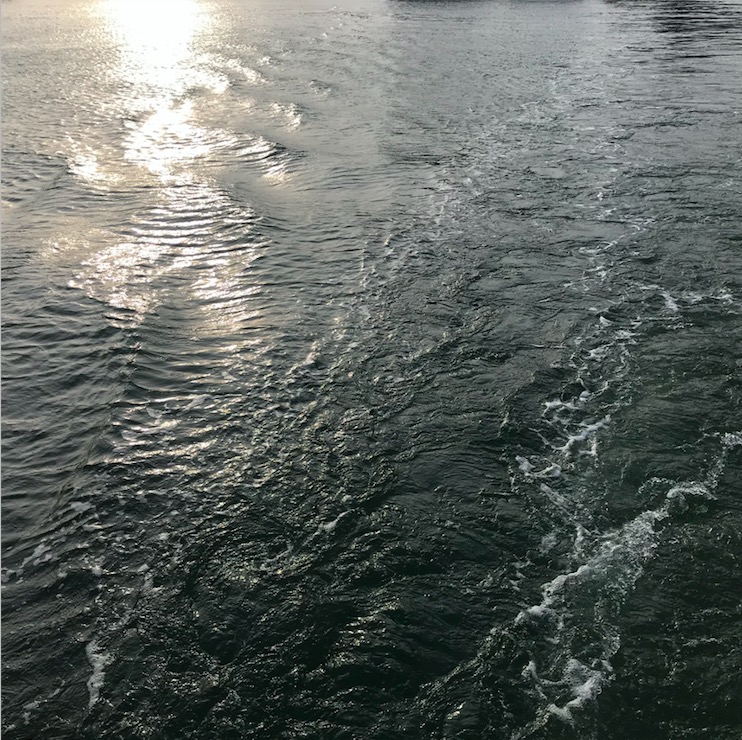 Here the ship is turning so we see water that is disturbed by the ship moving through, but doesn’t have the „boiling“ like where the propeller stirred up everything. 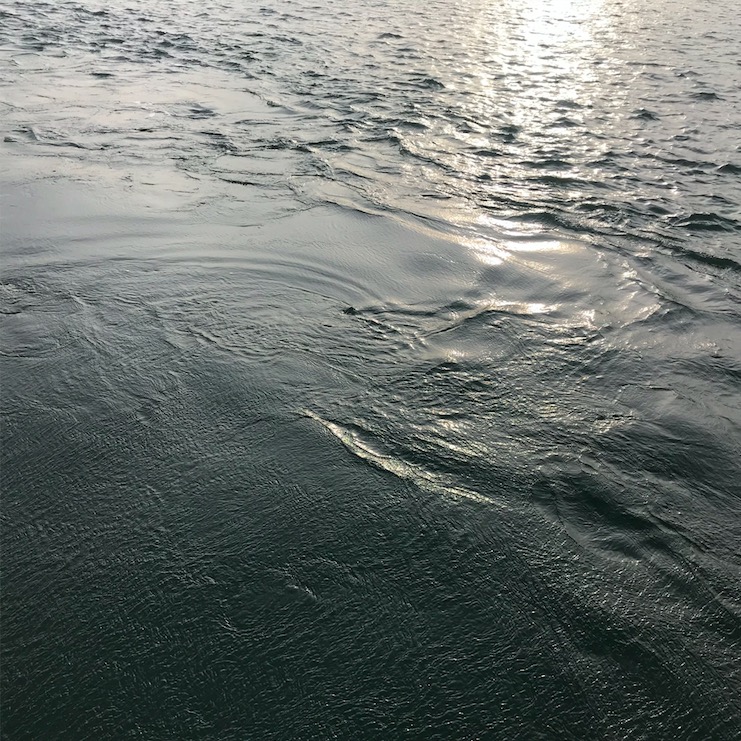 Now we see how the wind waves seem to be bunching up at the boundary between the wake and the area that wasn’t affected by the ship moving through. 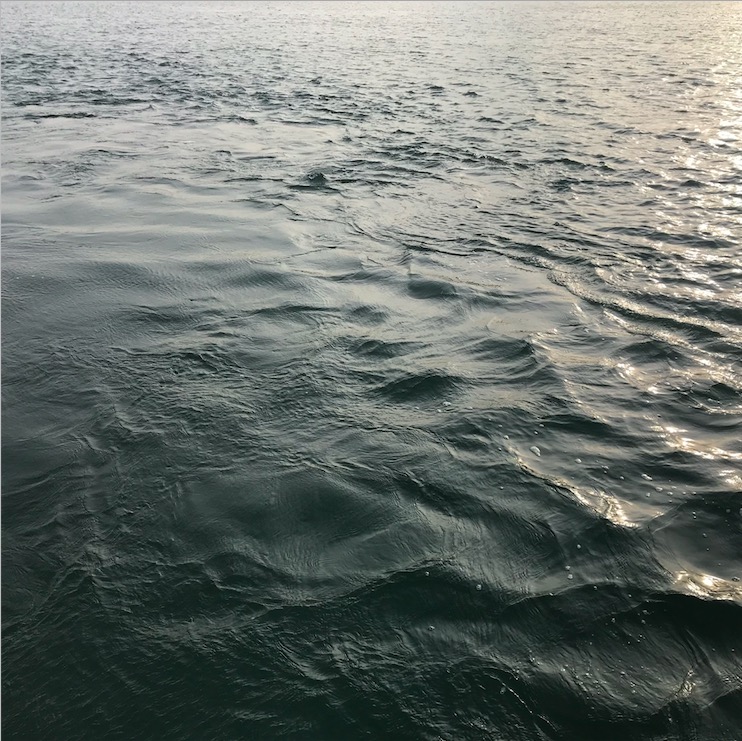 Then, for #SciCommSunday, I posted a picture of a book that I think is a brilliant introduction to the science of communicating science that I also wrote a blogpost on. 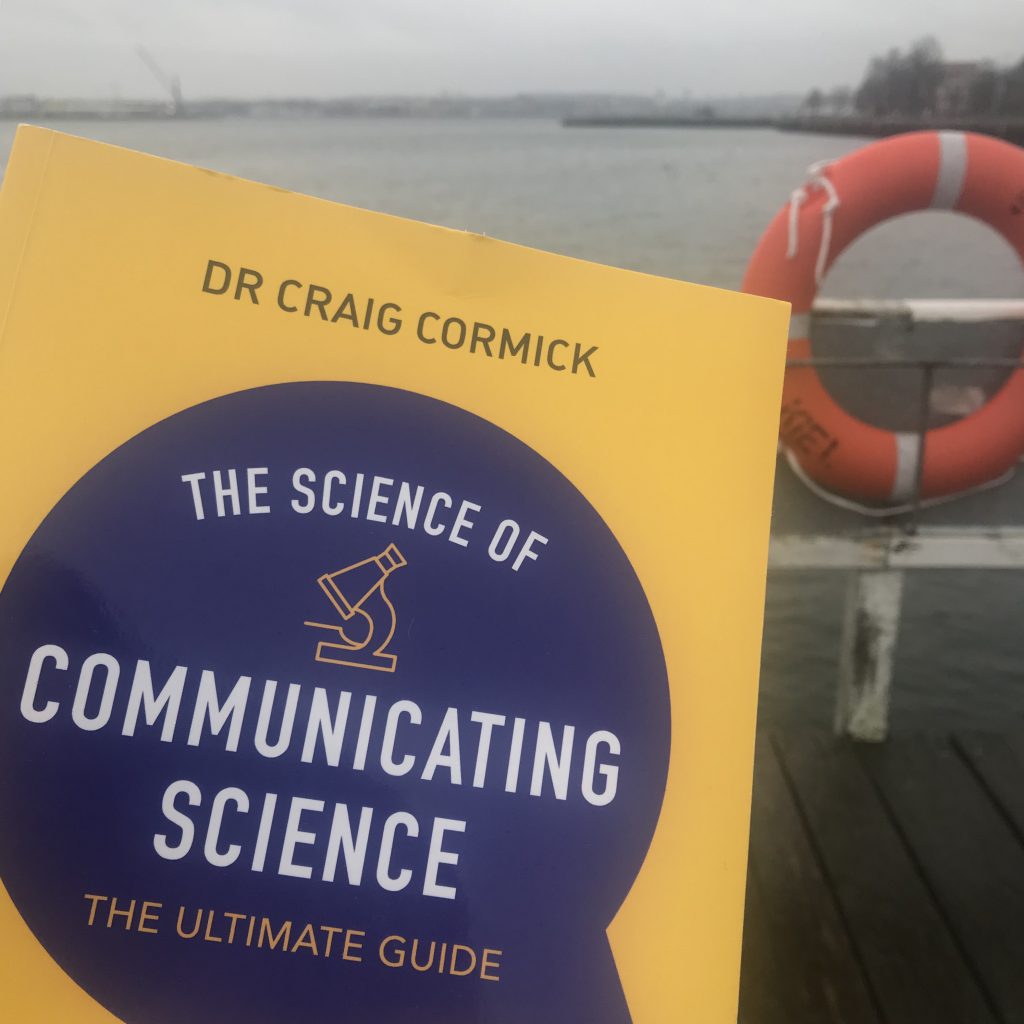 And surprise: Bonus pic for my dear readers that I didn’t post on Instagram but that I think is cool (will definitely experiment with this kind of pictures more! Except panorama mode does weird things to waves, so on second thought maybe not…)

What we are looking at in the picture above is a really low-water day in Kiel. Which leads to interesting wave watching opportunities!

See how waves that arrive with straight crests somewhere offshore get bent as they reach the shallow water? That’s because the velocity of a wave depends on water depth. The deeper the water, the faster the wave can move. The shallower the water, the more the wave is slowed down. Therefore, waves get slowed down first in regions where the water is shallower, and the parts of the wave crest that are still in deeper water wrap around the shallower part. Kinda like when you are slipping on an icy road, you fall in the direction of the foot that didn’t slip because your body spins in that direction. 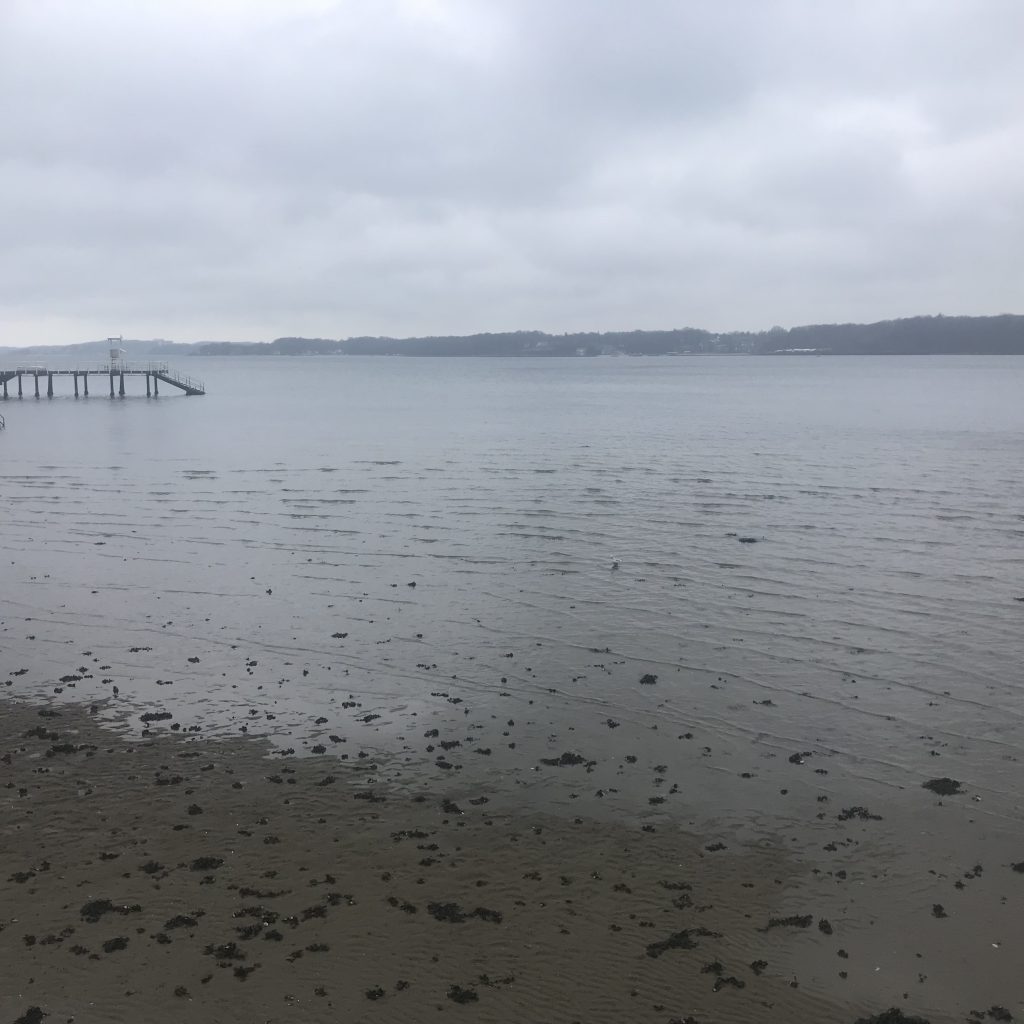 When there is really low water in Kiel fjord, we can observe the influence of topography on waves much better than we usually can! For example here we see how on one part of the “beach”, there are several wave crests behind each other, all breaking, whereas on the other part on the other side of the headland there is only one wave crest at the water’s edge. Why is that?

Wave crests get steeper and start to break when the water is shallow enough for the wave to “feel” the bottom. On the left side of the picture, depth is increasing faster towards the open ocean: The wave only feels the bottom right before it has reached the water’s edge. On the right side of the picture, on the other hand, the depth changes very gradually. Therefore waves feel the bottom already much earlier and many wave crests are steepening, preparing to break and finally breaking at the same time. 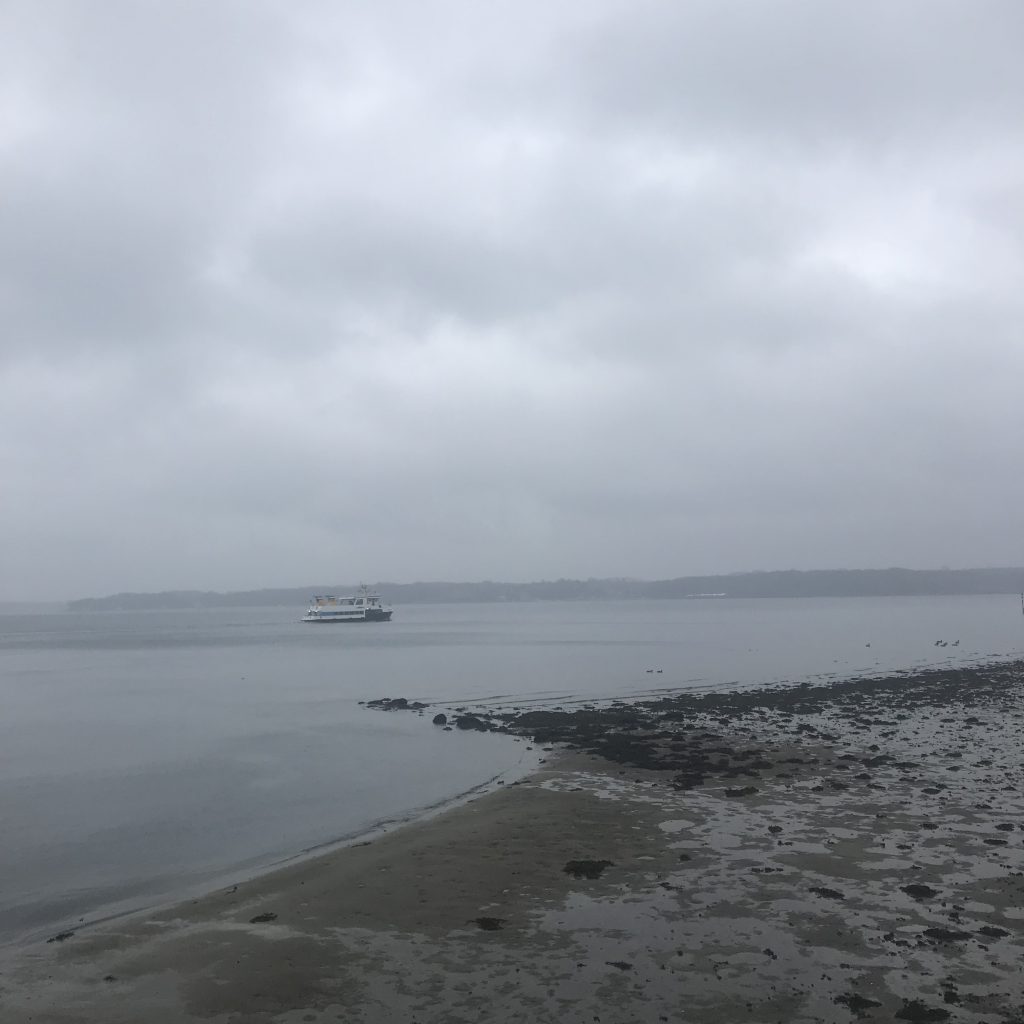 And then I just thought this picture was fun :-) 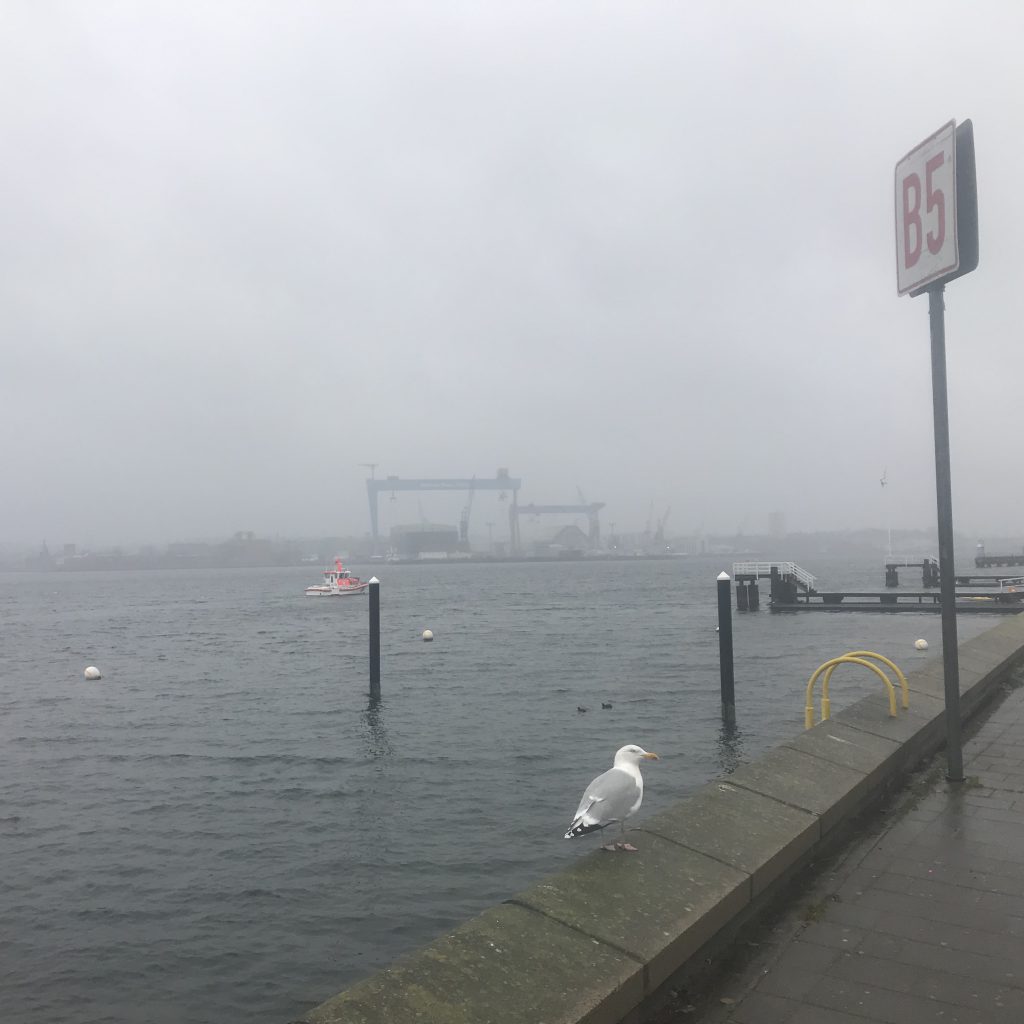 And a rainy day at work! 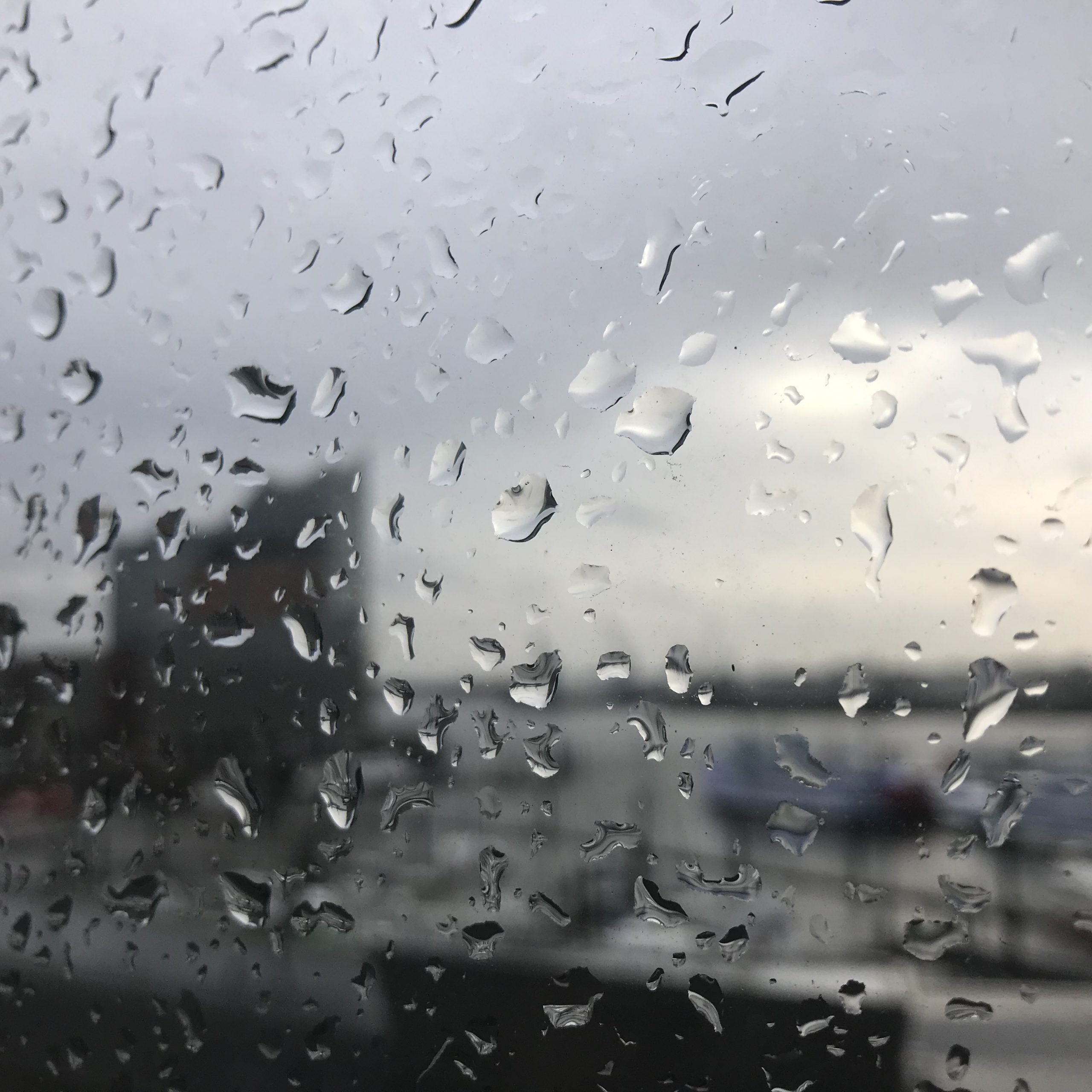 I actually don’t mind all the rain: It makes the flow in all the storm drains so much more interesting! Here we see how water shoots out of a pipe into a little lake. Note that I’m saying the water is shooting rather than flowing: That means that it is moving so fast that any disturbance is washed away with the water.

As the water shoots into the much slower flowing lake, it pulls water from the sides with it. This water obviously needs to be replaced from further away, so a recirculation is set up. 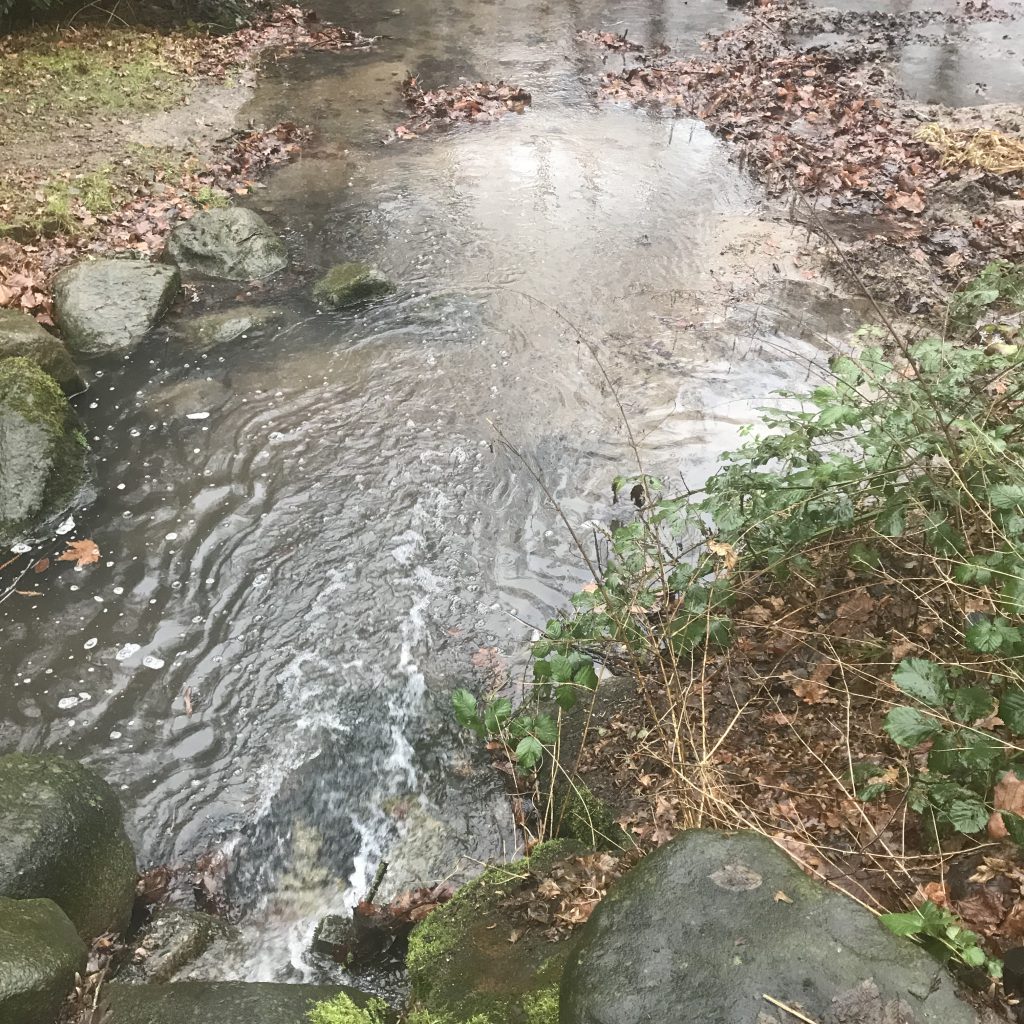 Here is an annotated version of the picture to see the recirculation going on: 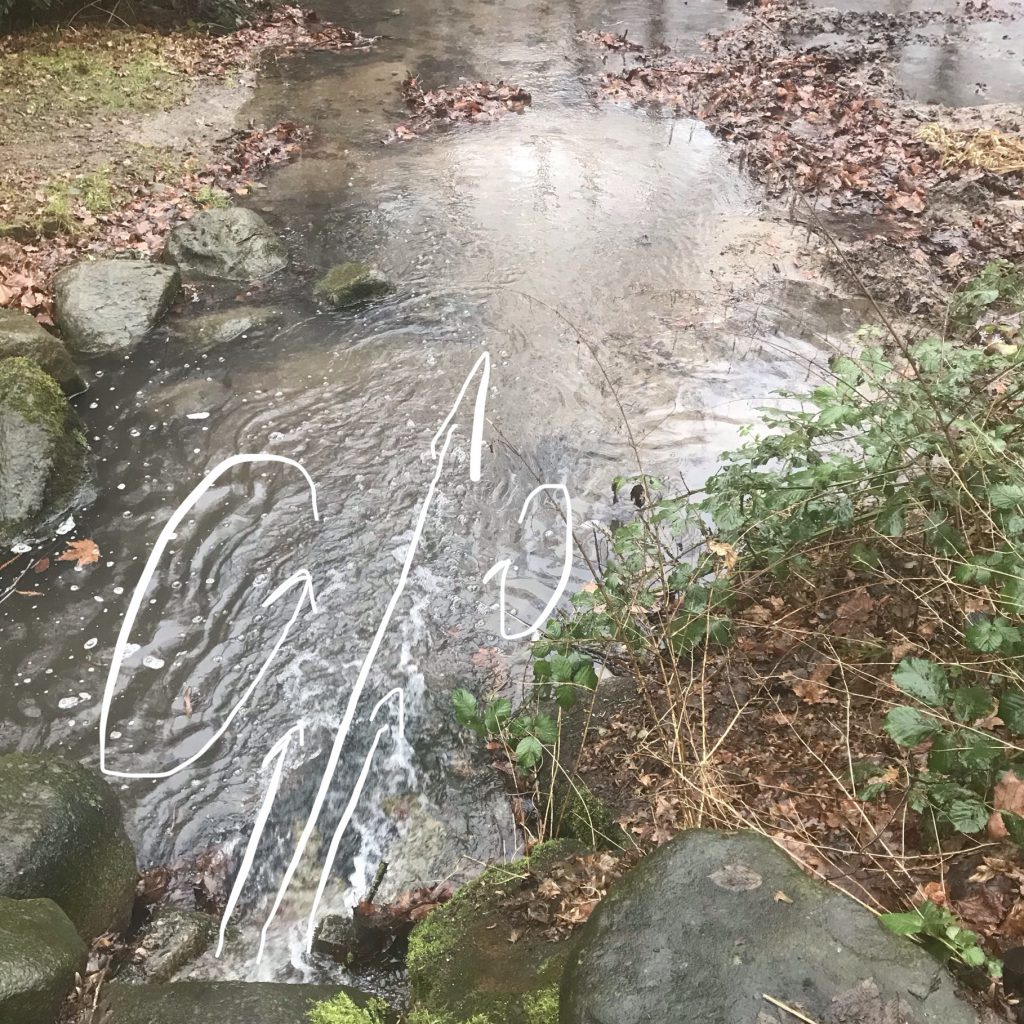 So that’s what has been going on over on my wave watching Insta @fascinocean_kiel! :-)