Inspired by the article “Affordable Rotating Fluid Demonstrations for Geoscience Education: the DIYnamics Project” by the Hill et al. (2018), I spent a fun Sunday afternoon with my friends Joke and Torge in their kitchen, playing with Legos, water and food dye. 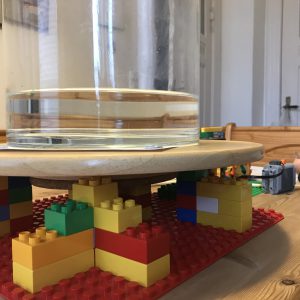 Turns out building a rotating table isn’t as easy as we had hoped, because my Lazy Susan’s axle is unfortunately really off centre (how did I never notice before?), which makes it pretty difficult to drive it with a grinding wheel, and the LEGO motor we were using only has one speed (which would have to be regulated by changing the diameter of the gears). That makes it really difficult to spin up a tank at rest if you go at it zero to full force… 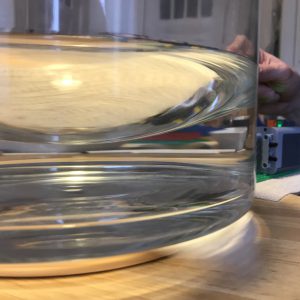 But we got it to spin! Look at the cool paraboloid surface!

Next issue, though: my awesome glass vase which looks like it should work well as a tank has a really irregular bottom, which makes it very difficult to have anything stand in the centre without too much of a wobble. Also, for the Hadley Circulation experiment we were trying to set up here, when do you add in the cooling in the center? Would be best to do it after the tank is spun up, but that is such a pain to do! And I messed up the dye here, too. 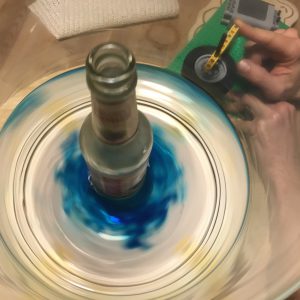 But at least you can see a little bit of what it will be like when we are done, right? 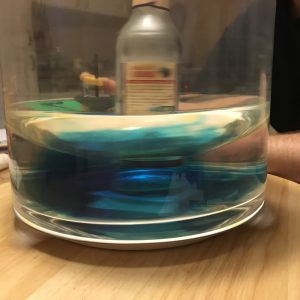 And then it will be almost ready to be used in teaching. Well, almost…

Funny how tank experiments that you think should be quick and easy to set up & run always take sooo much longer than expected. But it’s so much fun that I really don’t mind! :-)

Related Posts to "My first attempt at building a rotating table for kitchen oceanography using LEGO":