Can you do a bottom Ekman layer demonstration without a rotating table? That’s the kind of challenge I like :-)

The way I’ve previously showed bottom Ekman layers is by spinning up a cylindrical tank on the rotating table until it reaches solid body rotation, adding dye crystals to visualise the circulation later, and then stopping the tank to create friction at the bottom (and the sides, but we are mainly interested in the bottom since we want a bottom Ekman layer) as the water continues moving but comes under the influence of friction. But what if we just invert the whole thing?

Move the “bottom”, not the water

My initial idea was to use a Lazy Susan (you know, the kind of tray on a swivel base that you can use for your jam and honey etc on your breakfast table, but which you shouldn’t turn too rapidly (ask me how I know)) and to have a cylindrical vase sit on it, which will then be put in rotation and will rotate around and under the (initially still stagnant) water. The friction with the moving vase will then lead to a bottom-intensified circulation.

That worked quite well, didn’t it? 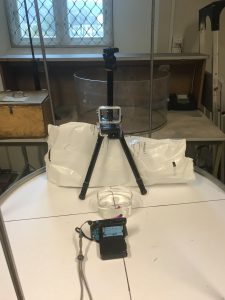 So how would that work as kitchen oceanography without an actual rotating table?

The physics themselves obviously work in this setup. However, they will be really difficult to observe for several reasons:

So all in all: it was a nice idea, but either I haven’t thought it through well enough, or it is a whole lot easier to do with a rotating table. I would imagine that it’s quite hard to observe when you don’t know very well what you are looking for, so it is unfortunately not useful as a demonstration to introduce people to the topic. What do you think? Any suggestions on how to improve this and make it work at home?

Related Posts to "Bottom Ekman layer without a rotating table":