We saw Piel Island with a very cool castle ruin across the bay when visiting the South Walney Nature Reserve the other day,  and were intrigued by it. Depending on the tides, you can drive over by car, walk, or take a ferry, which is what we did.

Arriving at the spot where the ferry was supposed to leave, we were greeted with this beautiful sight: A pier going down into the water, creating beautiful wave pattern in the strong incoming tide! We see a hydraulic jump similar to the one we saw on Walney Island, except that this one is even cooler: It happens in the area where the pier is just below the water surface, but a strong current goes underneath the pier on the land side as soon as it is above water level. 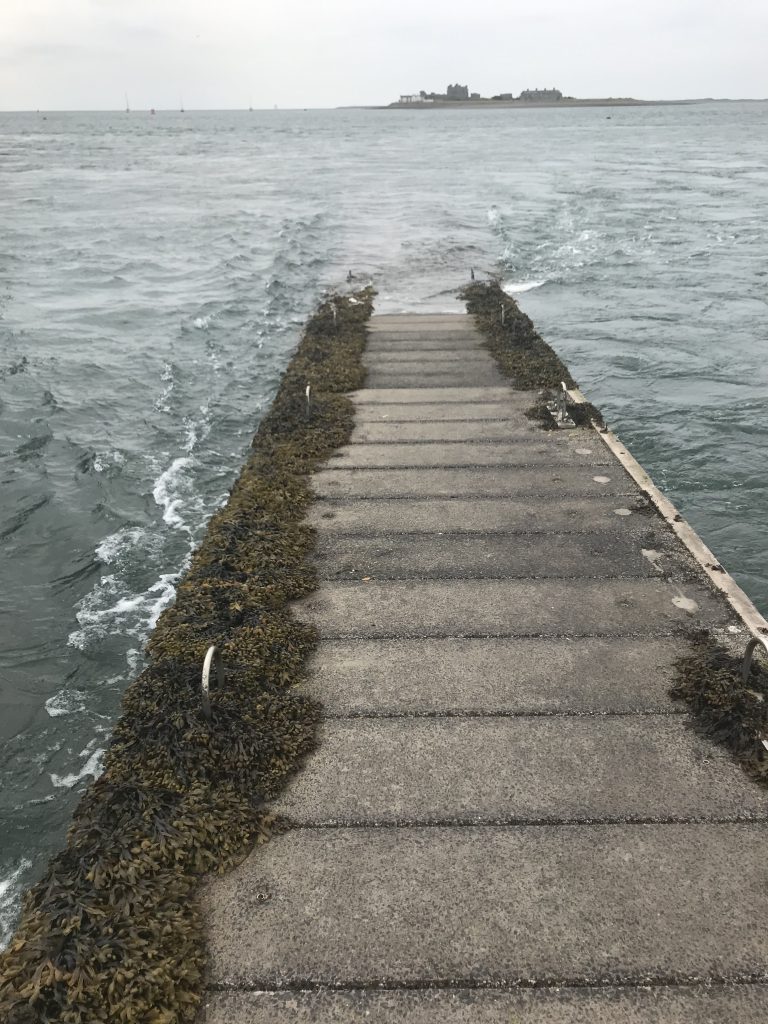 Above, you see the current going left-to-right, creating a lot of turbulence where water comes out from underneath the pier (see those eddies where the water looks as if it was boiling?). You also see the waves hitting the pier on the left side, and then standing waves towards the right of the pier, locked in place because they are propagating upstream with the current’s exact velocity, thus staying in place (aka “standing”).

This is super fascinating! To me, anyway ;-)

Once on Piel Island, there is a lot of really cool wave watching to be done, too.

Below, you see waves reaching the island and “wrapping around it” — i.e. being refracted towards regions of lower velocities, which means that they will be bent towards the shore, no matter which direction they originally came from. 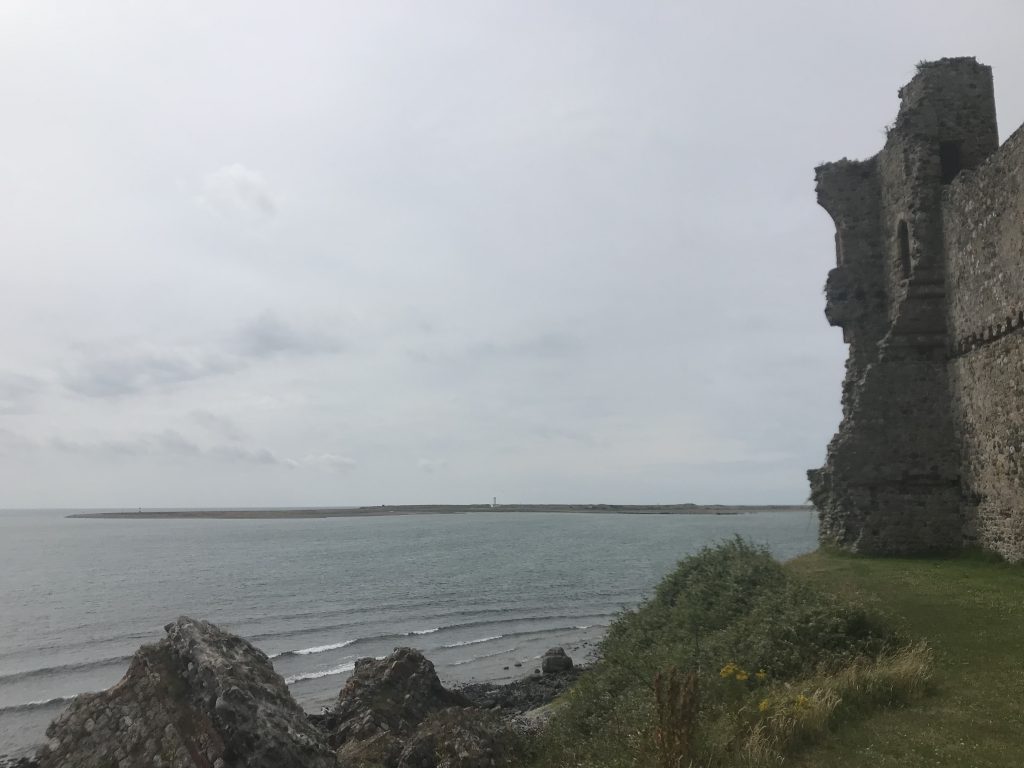 You can observe this for quite a big part of the island as you walk around it! The original wave direction is the one seen in the bottom left, all the rest of the wave field has been refracted by the change in water depth! 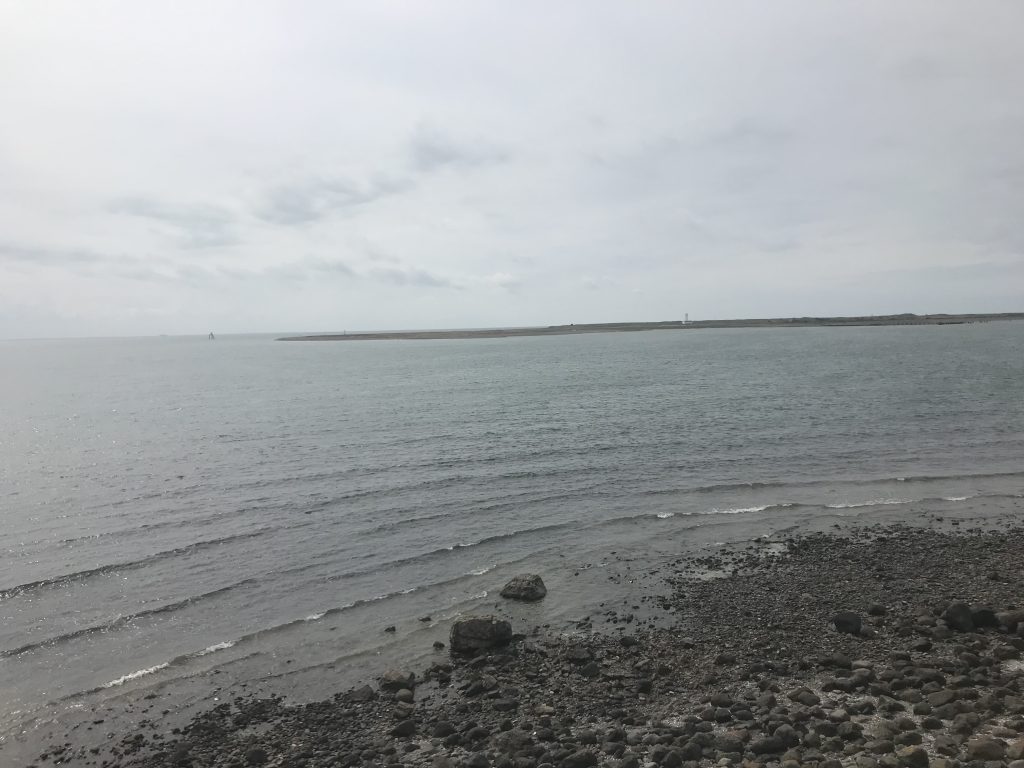 But obviously there is a limit to how long you can play this game. Below, you still see waves wrapping around the island, but they aren’t reaching the shore more or less parallel to it. 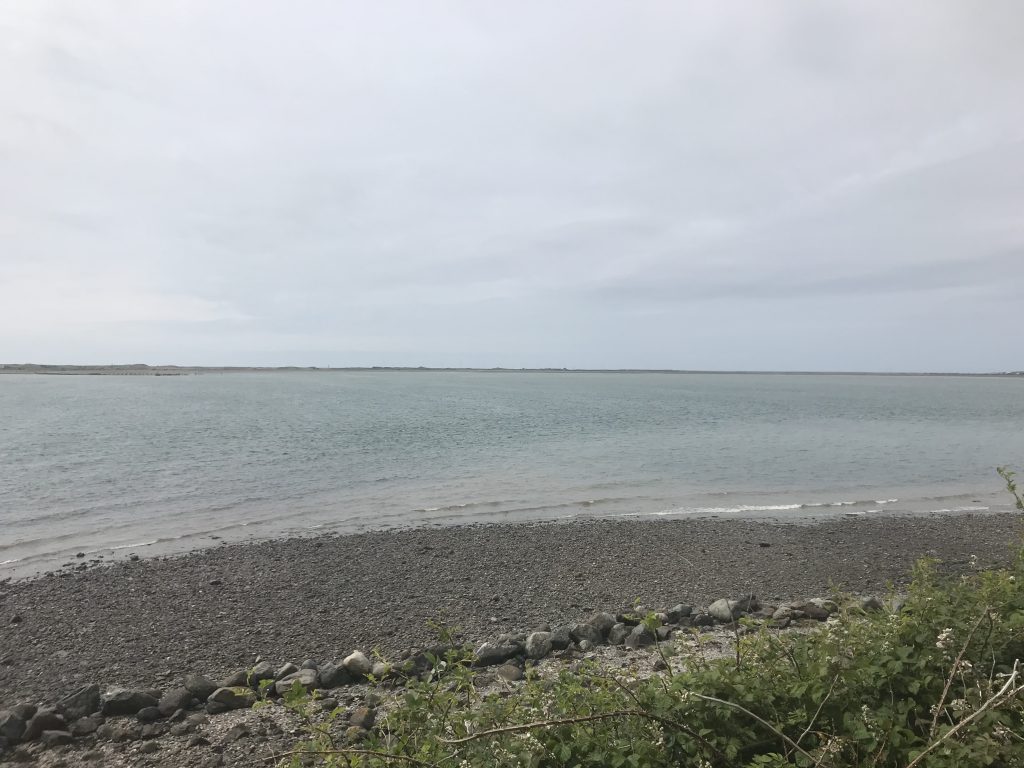 But even just watching all these crests break, one after the other, along the shore looks pretty cool! 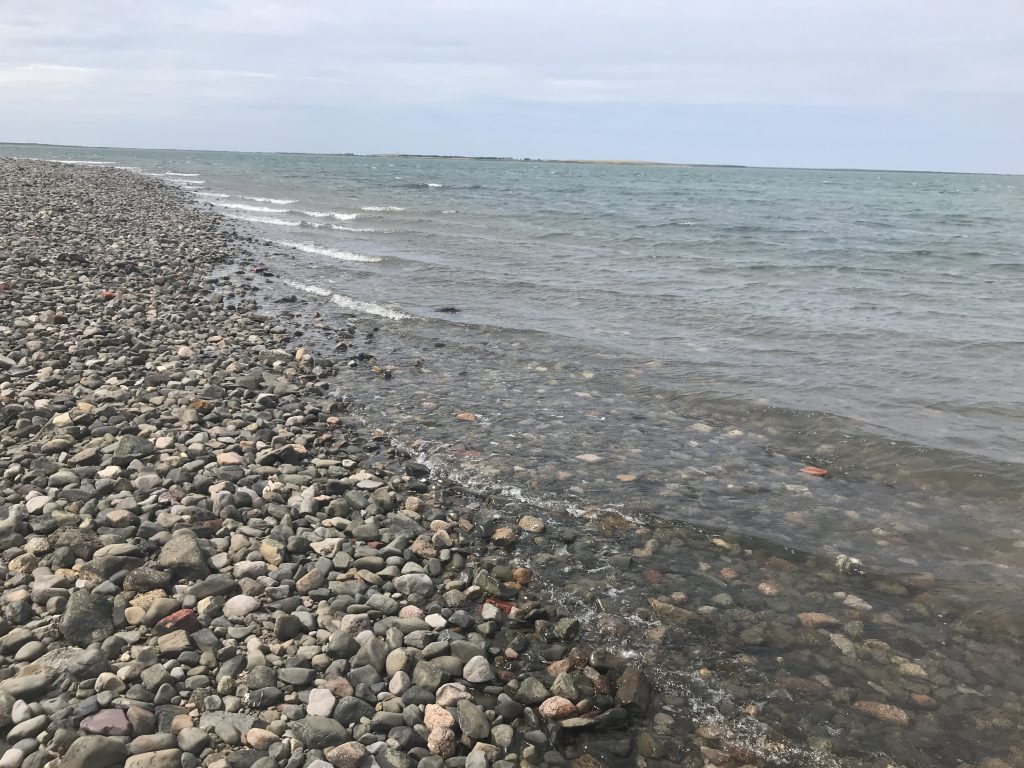 But, obviously, if waves get wrapped around an island, but not completely, there must be areas where wave fields going around either side of the island meet up at an angle to each other. Like here: 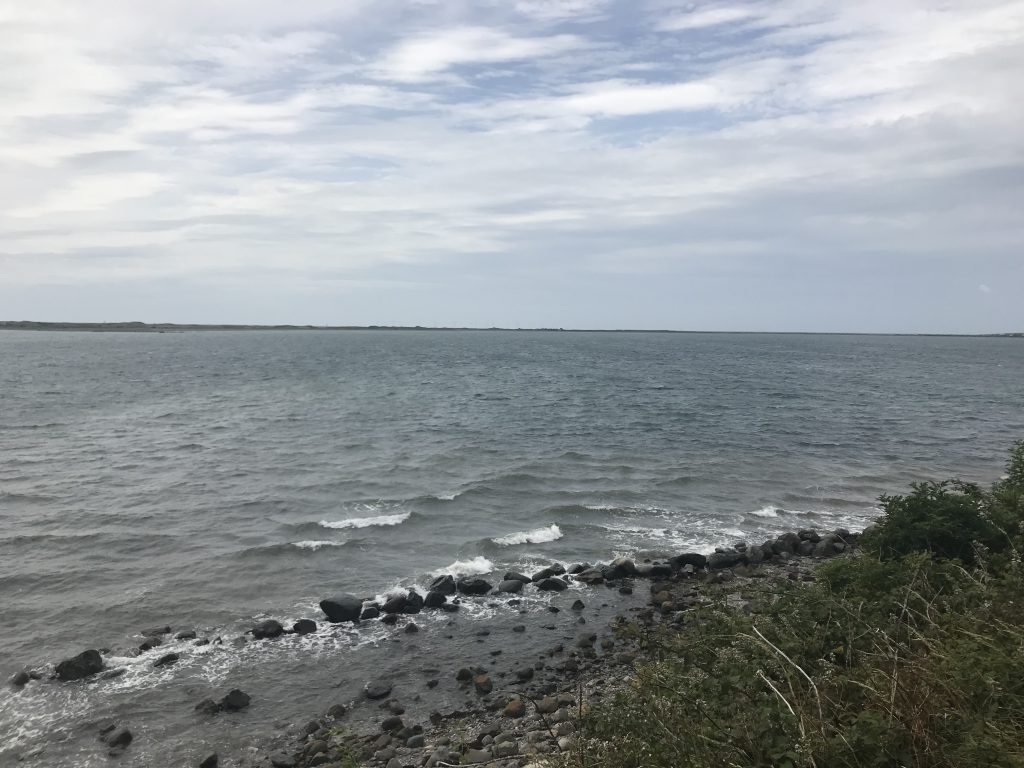 And once again, this time moving:

And another very good spot to see this kind of pattern is a little headland like below: 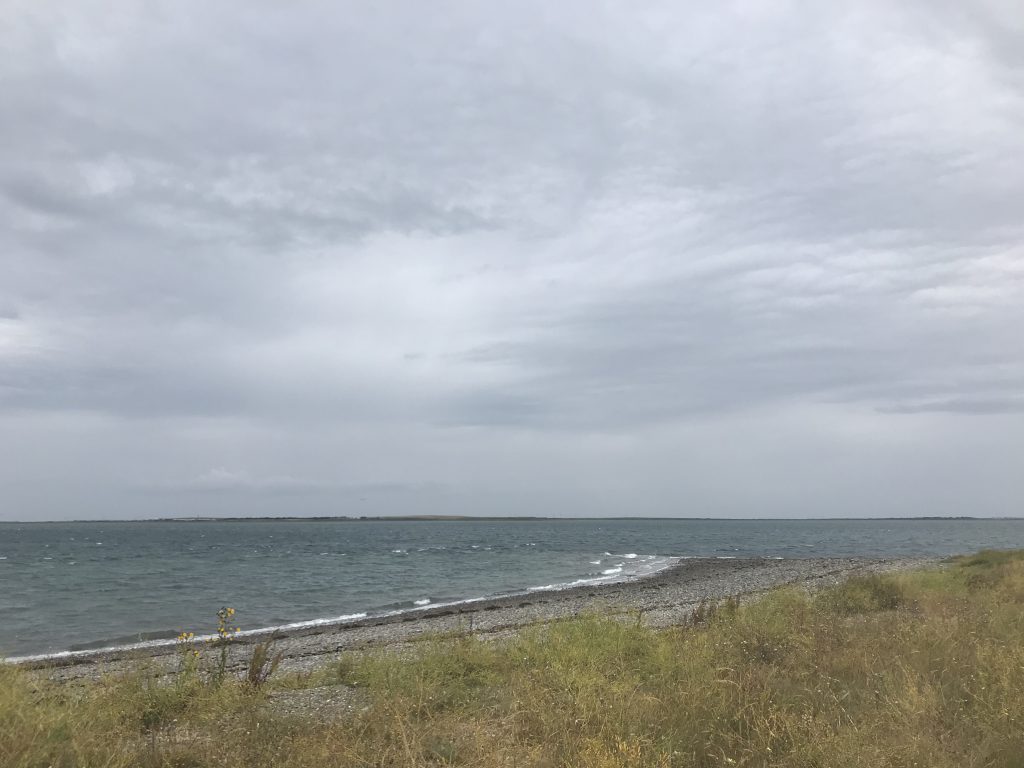 Can you spot the distinct checkerboard pattern of the waves, and see how they break where a crest meets another crest? 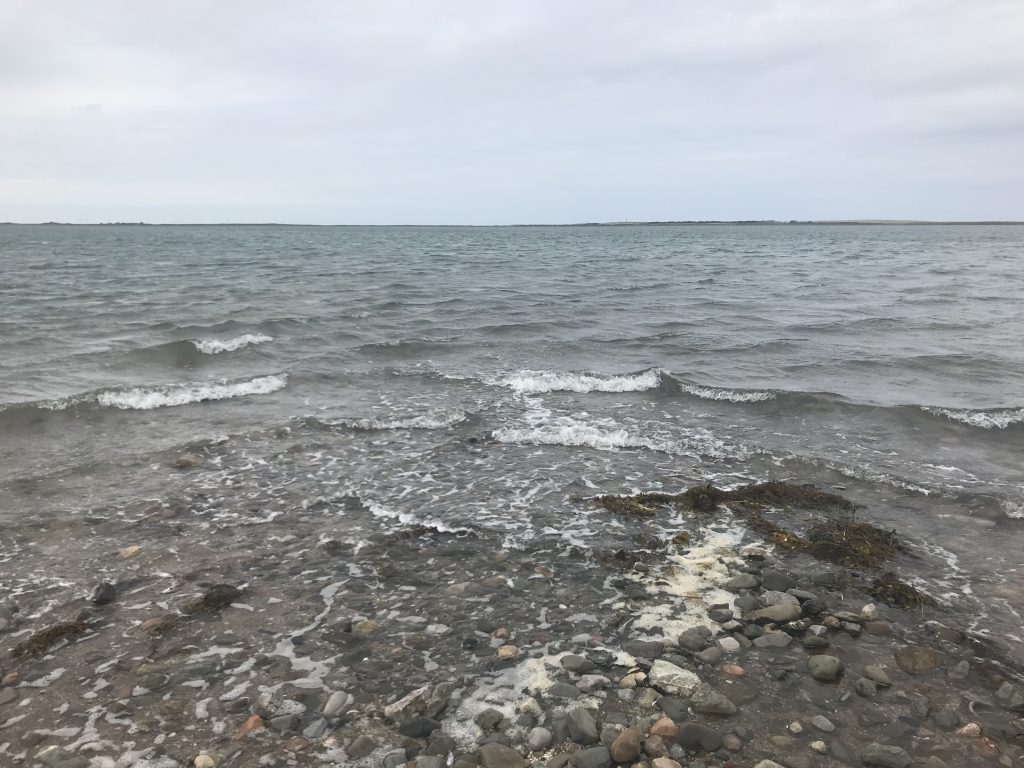 I can watch these kind of things forever without getting tired of it! 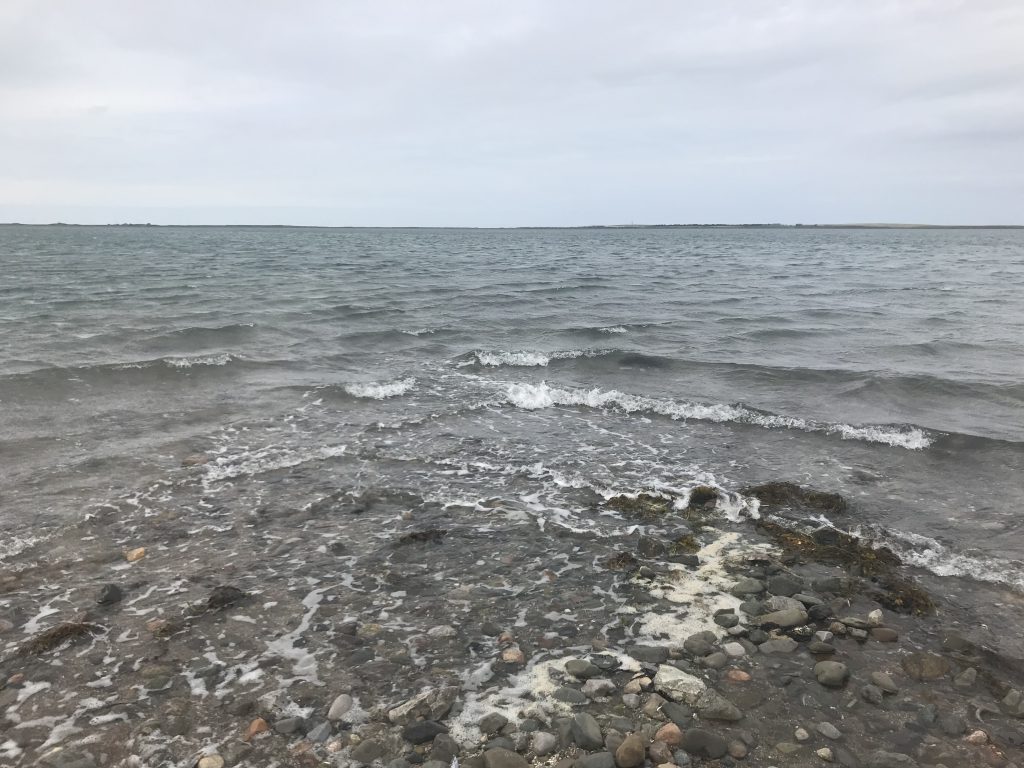 And once more, as a short movie, because waves are even more awesome when they are moving: 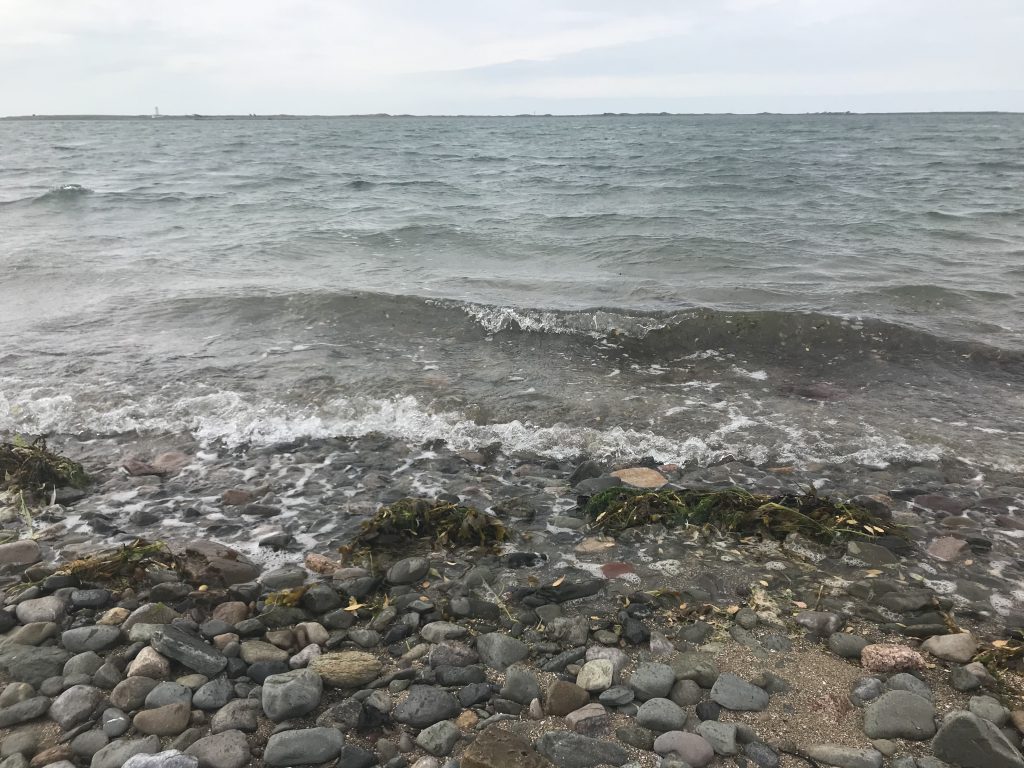 How beautiful is this? 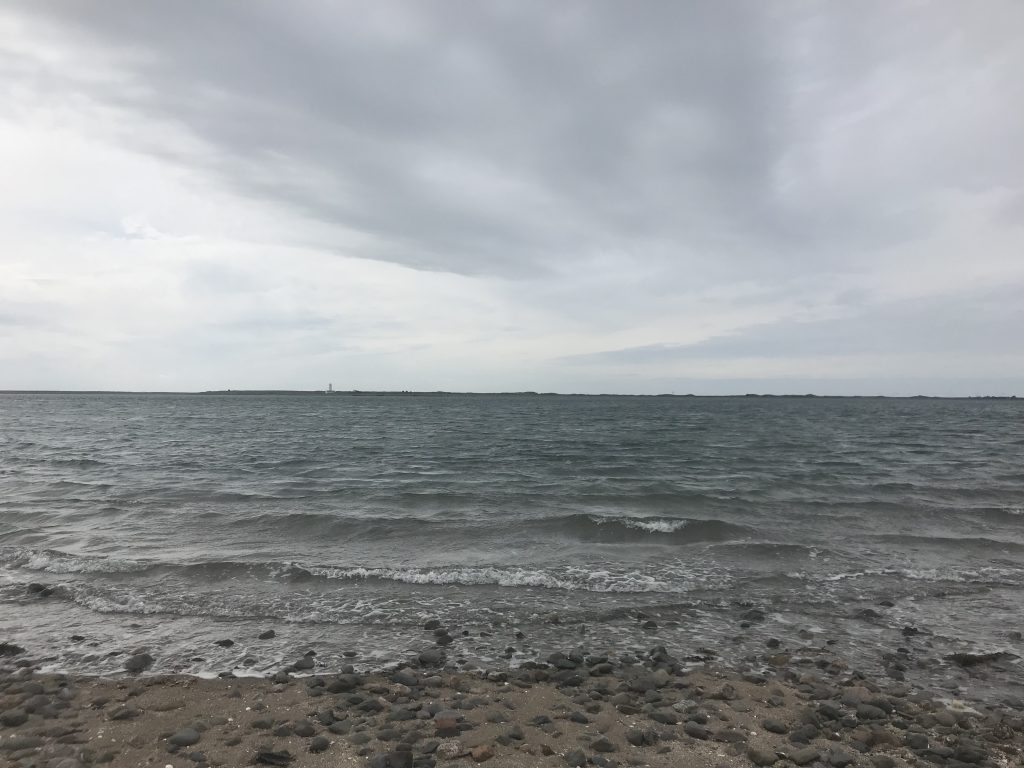 I can really watch waves for hours without getting tired of it. 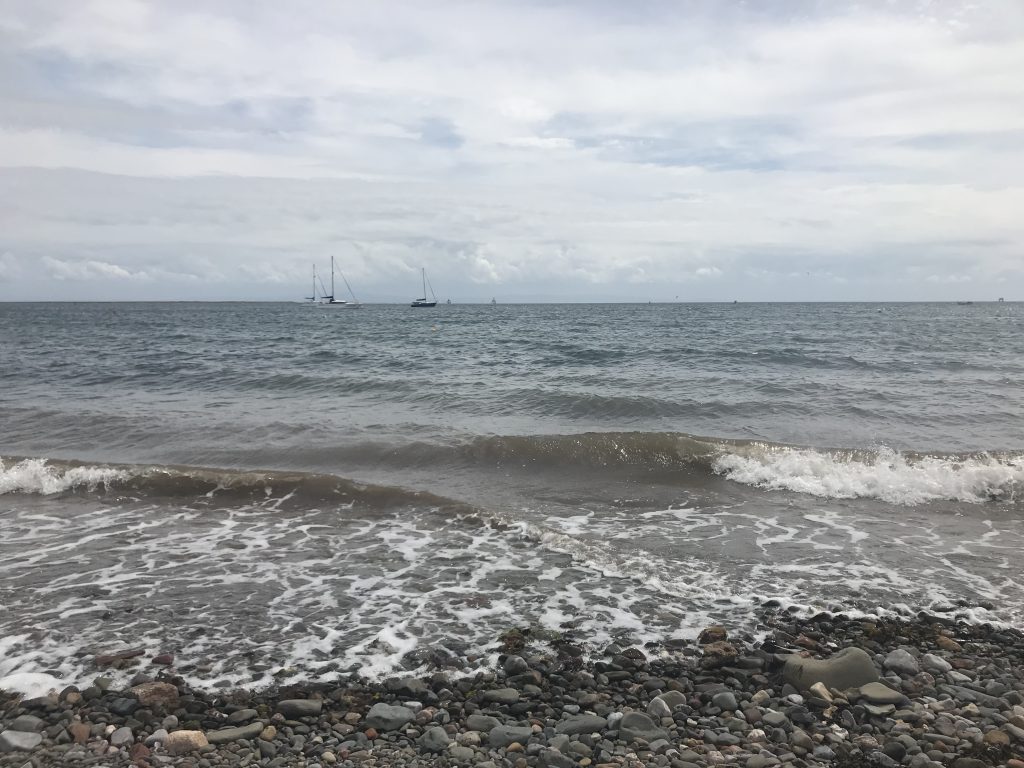 But anyway, walking further around the island, here is a spot with fewer waves: Here we are in the lee of the island, the area that is sheltered from the wind by the island itself. 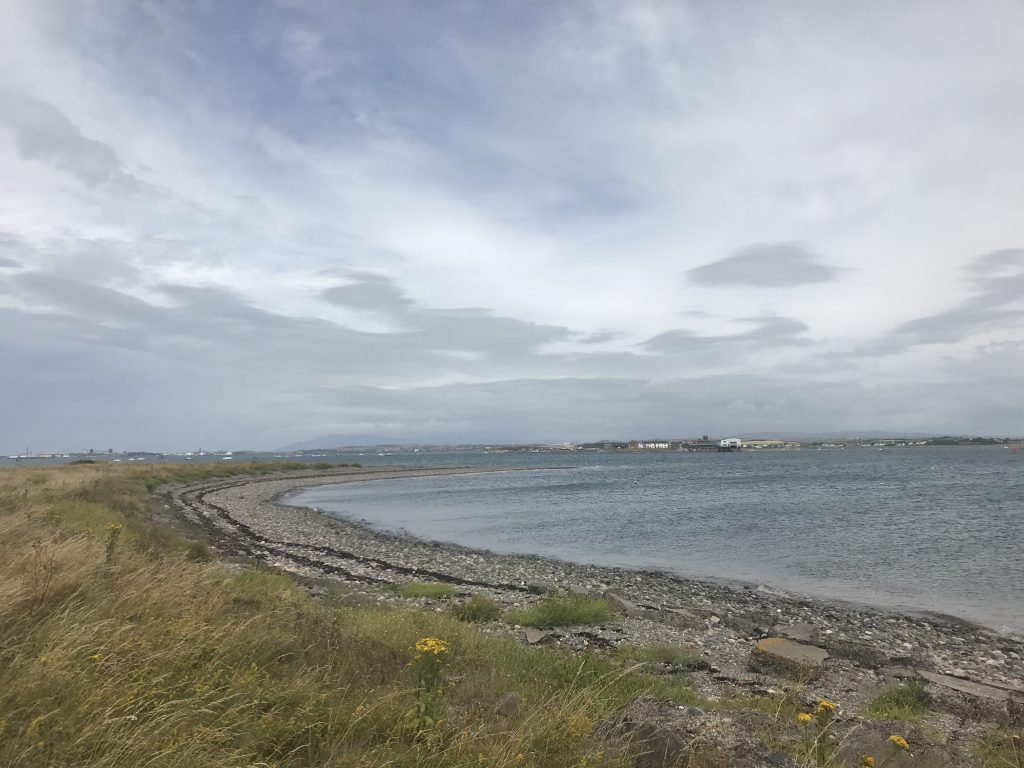 Oh, and this is the ferry that got us over to the island. As you might notice below, the current has turned and is now going out — unfortunately I didn’t take another video or even good picture! But you see the edge of the jetty in the lower right, and the current downstream of the obstacle with a very different surface texture than the surrounding water. And then there is always next time… ;-) 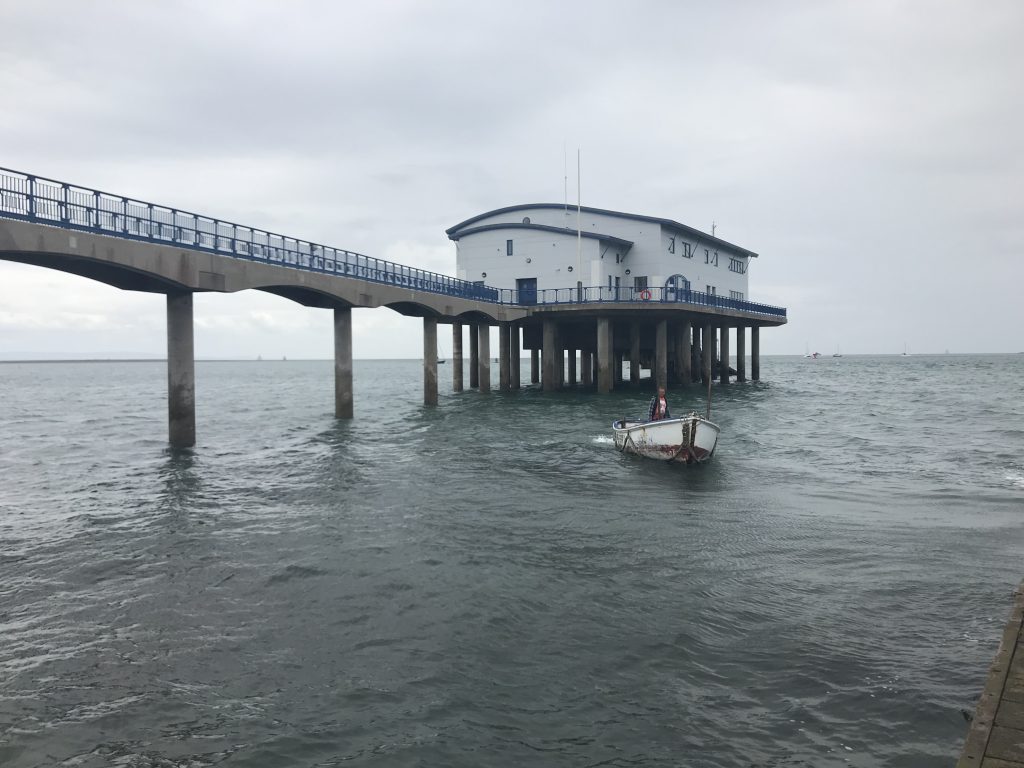 On our way back home, we stopped for scones and coffee (sorry, no tea) and had the amazing views you see below. These channels don’t look dangerous by themselves when they are empty, but thinking back to how quickly the tide comes in around here they don’t seem as harmless any more, do they? 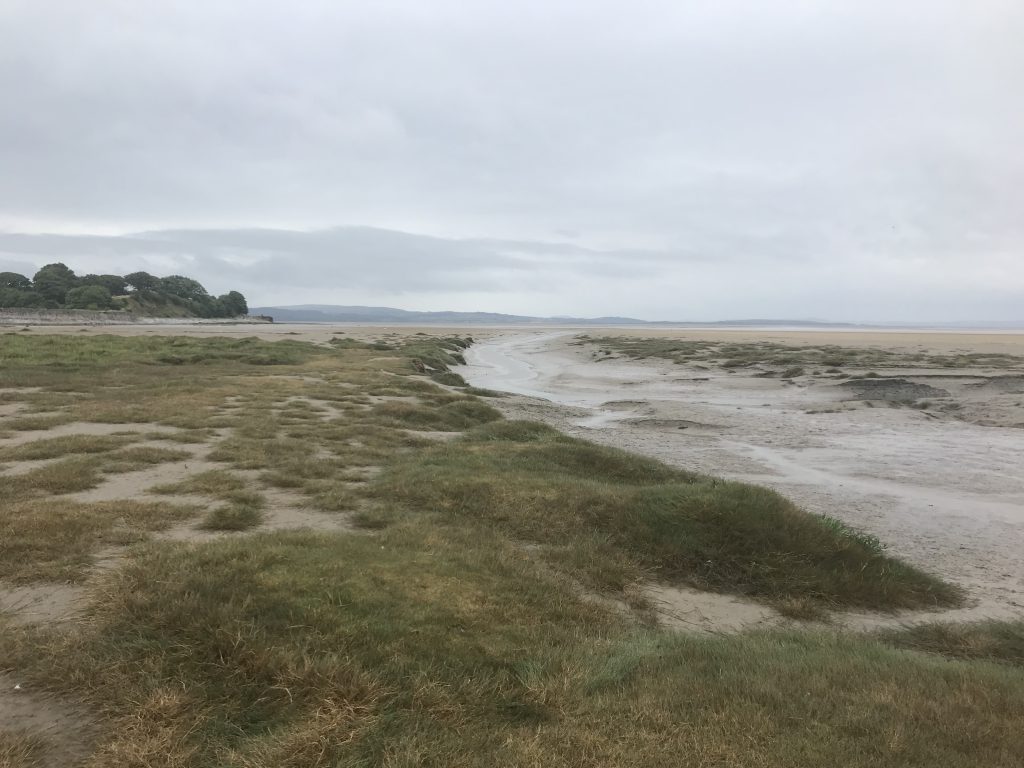 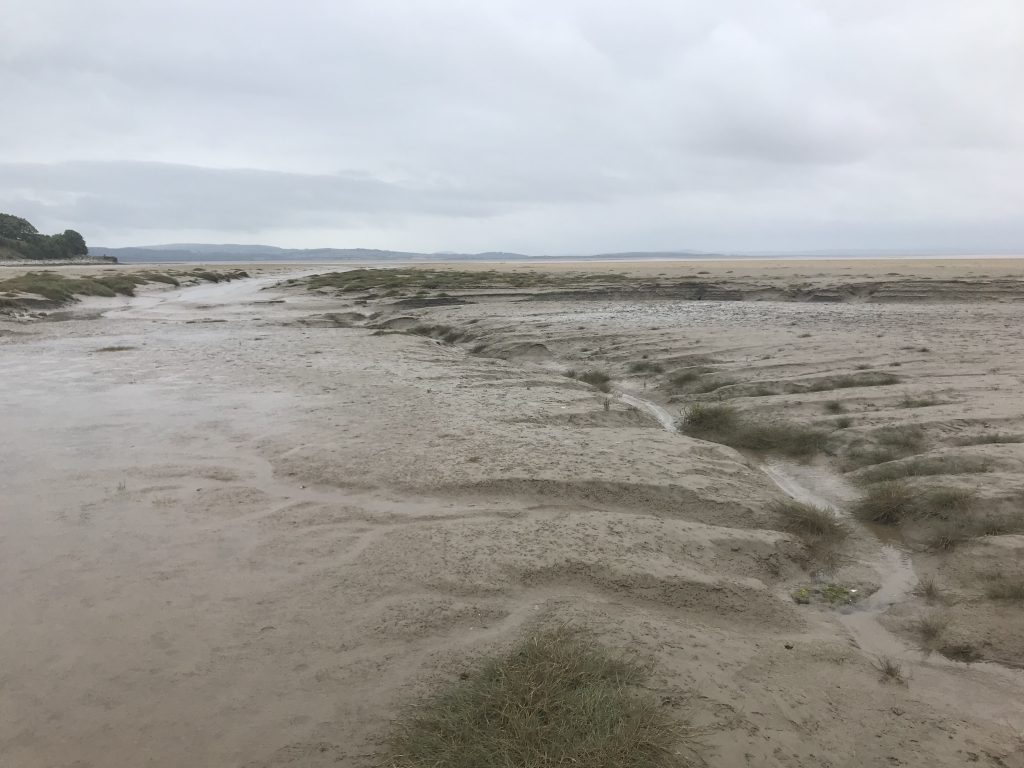