END_OF_DOCUMENT_TOKEN_TO_BE_REPLACED

Setting up an overturning circulation in a tank is easy, and also interpreting the observations is fairly straightforward. Just by introducing cooling on one side of a rectangular tank a circulation is induced (at least for a short while until the tank fills up with a cold pool of water; see left plot of the image below). 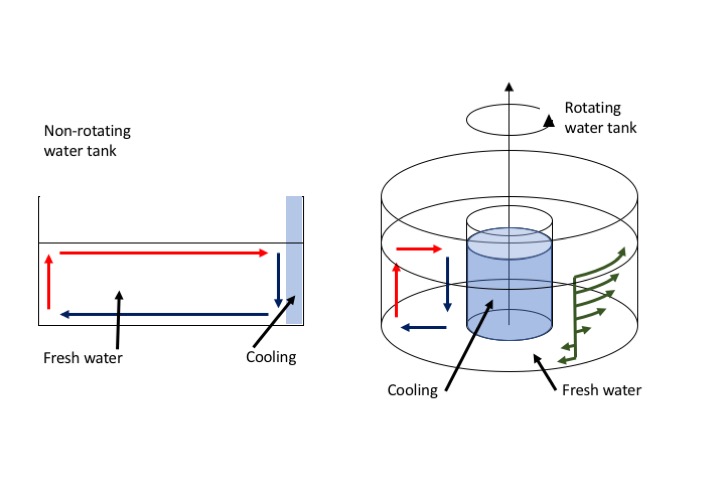 But now imagine an axially symmetric setup where the cooling happens in the middle. What will happen to that overturning circulation if the tank is set into rotation (see right plot above)?

First, let’s check there is an overturning circulation. We can see that there is when we look at dye crystals that sank to the bottom of the tank: Dye streaks are moving outwards (and anti-clockwise) from where the crystals dropped on the ground, so at least that part of the overturning circulation is there for sure. If our tank were taken to represent the Hadley cell circulation in the atmosphere, this bottom flow would be the Trade winds.

Now, in addition to having water sink in the middle of the tank, spread radially outwards, and returning by rising near the outer edge of the tank and flowing back towards the middle, a secondary circulation is induced, and that’s the “thermal wind”. The thermal wind, introduced by the temperature gradient from cold water on the inside of the tank to warmer waters towards the rim, tilts columns that would otherwise stay vertically.

You see that in the image below: Dye dropped into the tank does not sink vertically, but gets swirled around the cold center in a helix shape, indicated in the picture below by the white arrows. In that picture, the swirls are tilted very strongly (a lot stronger than we’d ideally have them tilted). The reason for that is that we just couldn’t rotate the tank as slowly as it should have been, and the higher the rotation rate, the larger the tilt. Oh well… 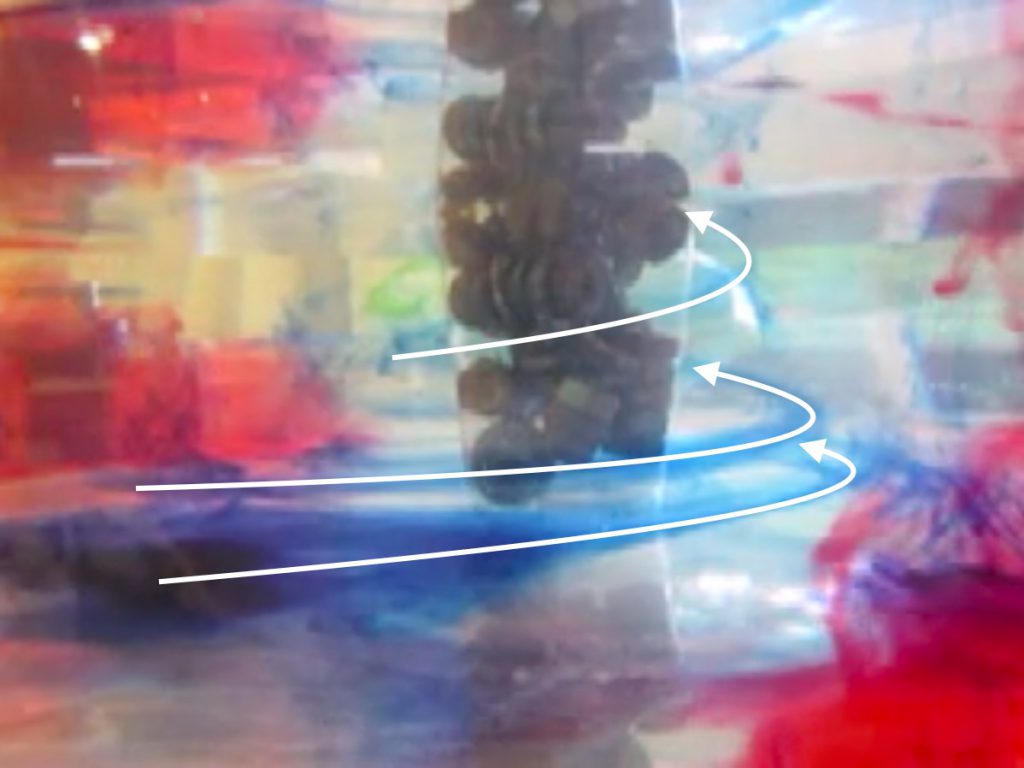 So this is the current pattern that we observe: An overturning circulation (sketched with the red arrows representing warmer water and the blue arrows representing colder waters below), as well as the thermal wind circulation (indicated in green) with stronger currents near the surface (where the water is moving in the same direction as the rotating tank, but even faster!) and then a backward flow near the bottom. The velocities indicated here by the green arrows are what ultimately tilted our dye streaks in the image above.

The thermal wind component arises because as the overturning circulation moves water, that water carries with it its angular momentum, which is conserved. So water being brought from the rim of the tank towards the middle near the surface HAS to move faster than the tank itself the closer it gets to the middle. This flow would be the subtropical jets in the Hadley cell circulation if out tank were to represent the atmosphere.

Here is an old video of the experiment, first shown 5 years ago here. I’m looking forward to when Torge’s & my rotating tanks are ready so we can produce new videos and pictures, and hopefully being able to rotate the tank even more slowly than we do here (but that was the slowest possible rotation with the setup we had at that time). I promise you’ll see them here almost in realtime, so stay tuned! :-)

Now that I have introduced the new tag “kitchen oceanography: food related” to my blog, it’s time to add a couple new posts to that category. And today I have a fun post for you!

But first, what does “kitchen oceanography” even mean?

The benefits of “kitchen oceanography”

It’s pretty apparent why “kitchen oceanography” is a great alternative to regular tank experiments: because you can do it with stuff you have at home rather than needing access to a lab with a tank, and then a lot of water, salt, dye, other resources to conduct the experiments. Doing kitchen oceanography, we use a minimal amount of resources.

But the second, even larger benefit to me is that you can do these kinds of experiments and observations basically everywhere and at any time. So you can fit in a quick session of kitchen oceanography while sitting in front of the fire place on a skiing trip with friends, or while doing the dishes with your godchild. And you can inspire others who might not have access to labs to still do cool oceanography experiments, at home or wherever they like!

Apparently, the biggest predictor of future interest in STEM topics is whether people as kids often cooked with their parents! No literature source for this, but that’s what my educational research colleagues next door told me… So playing in the kitchen, whether on kitchen oceanography or with food, is a good thing!

Observing boiling eggs might not sound like a super exciting activity to engage in, but sometimes it is. Last year we did observe interesting foam pattern when boiling eggs (I still can’t explain where the foam is coming from! Can you?). 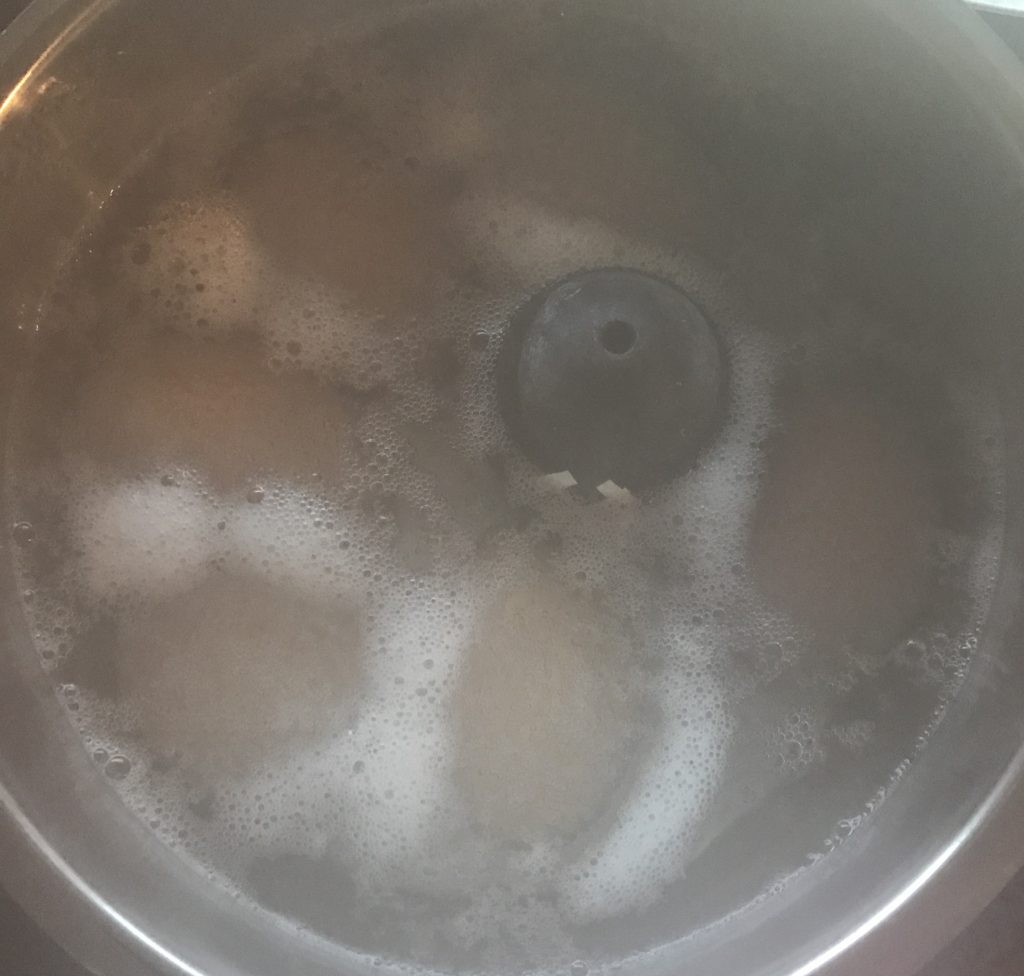 Foam pattern in a pot of boiling eggs. P.S.: The “black egg” sings different songs to let me know how hard-boiled my eggs are at any given moment. I love this because they are songs I learned from my godson and it always reminds me of him and his family :-)

The pattern in the foam show the convection pattern of the boiling water around the eggs which act as obstacles. Water is raising from the bottom of the pot to its surface, bringing up foam. But the eggs are located so close below the water’s surface that the circulation above them (if there is one) is pretty much disconnected from the convection happening all around the eggs.

But then if you throw out the water…

Even the empty pot still shows you what the circulation pattern must have been like!

But then the next cool thing happens when you throw out the water: There are limescale crystals on the bottom of the pot! And, interestingly enough, they show the former locations of the eggs. And I think they are forming in exactly those spots because just as there is (hardly any) circulation above the eggs, the circulation below is also inhibited, water has longer residence time (because it isn’t whipped away by convection) and those crystals can form.

Which explanation do you think is more likely? Or do you have another one entirely?