Today is a great day for a wave riddle! Below you see a picture I took on my walk home the other day.

Can you tell what caused those waves? (Solution underneath the picture!) 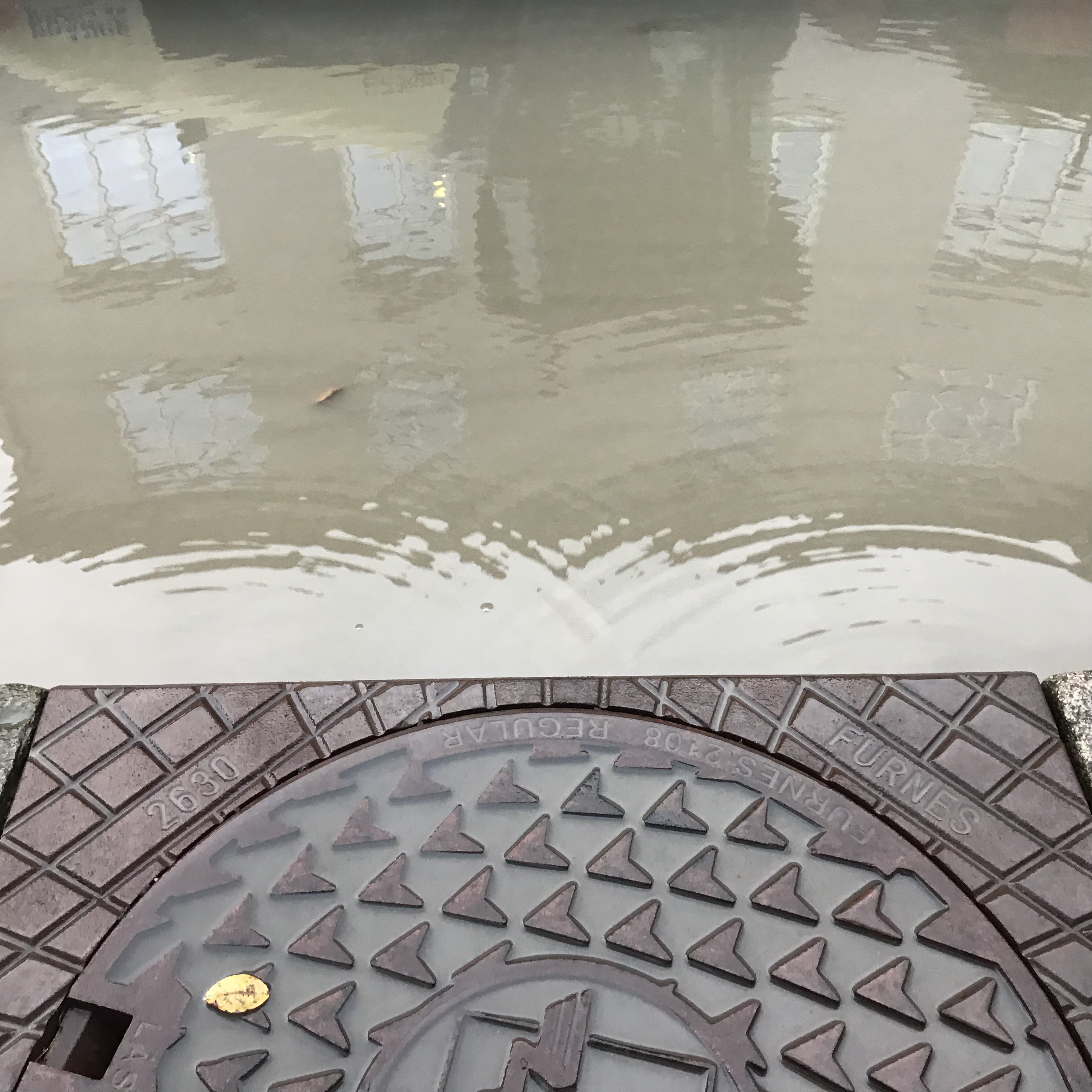 In the picture above, we are looking at the curb and the lid of a drain. There are two ring-shaped waves radiating outward from centres that seems to be sitting pretty much on the edge of the curb stone on both sides of the drain cover, and these are the waves we are trying to explain.

Now there are several possible explanations for ring-shaped waves:

Raindrops falling on the water

As we see from the absence of ring-shaped waves on the water surface (except for the two we are trying to explain), it wasn’t raining at the time this picture was taken, hence raindrops are not the explanation to our observed wave pattern.

Also, there are a lot of concentric rings radiating outwards from each of those two points. This doesn’t work well with a “rain drop” explanation. Raindrops do create more than one ring wave because a raindrop makes the water surface oscillate and sometimes secondary raindrops are thrown up into the air and then fall back into the same spot, creating a wave ring of their own. But still, raindrops typically do not create more than two or three rings. But as you see from the picture above, there are a lot more concentric waves!

Something other than rain dripping on the water

So if raindrops are out, since we can’t expect them all to be falling just in those two centres of the wave rings in order to create so many concentric rings, how about water dripping (or even pebbles falling, for that matter) from some defined place to create that structure?

This is actually a good explanation, except that we would expect to see some evidence of something falling. Yes, we might have just captured the picture right after the last drop or pebble or whatever else of a whole series of things dropped in the water, so we get the waves but don’t see what dropped in. But that’s pretty unlikely, isn’t it?

So on to the next explanation:

Something beneath the water surface poking at the surface from below

This is actually something we see a lot: If there are rocks or other obstacles on a shore and we have long waves washing over the obstacle, it will create wave concentric rings on the surface. This happens because when a wave trough goes over the obstacle, water is displaced in a different way than if there wasn’t an obstacle and the wave could just pass through undisturbed. And then, when a crest comes, the obstacle is in the way again, interrupting the orbital movements in the wave.

This might actually be the case in the picture above — except we don’t see any evidence of long waves on the puddle. So this explanation is out, too.

Water draining from the puddle

So now we’ve come to the last option that I can think of: Water draining from the puddle into the drain. And not only that: Water going around an obstacle and through two small-ish holes while draining underneath the drain cover! Those holes would be the centres of the wave rings. And the waves would be created by the little surges of water leaving whenever the water level was high enough, then a short pause as the reservoir filled up enough to overcome friction and surface tension, and then the next surge.

And after thinking through all this, I bent down to check, and indeed — the last solution is the correct one! Would you have guessed? :-)

And we are wave watching again!

A ship’s wake and the different zones within

Here is the wake of the little ferry that goes across Kiel canal.

I love how you can see the different parts that a wake consists of: The V with the ship at its tip that consists of wavelets from the bow wave and that spreads outwards. And then the turbulent wake where the ship has physically displaced the water when sailing through, and that then has been thoroughly mixed by the ship’s propellers. 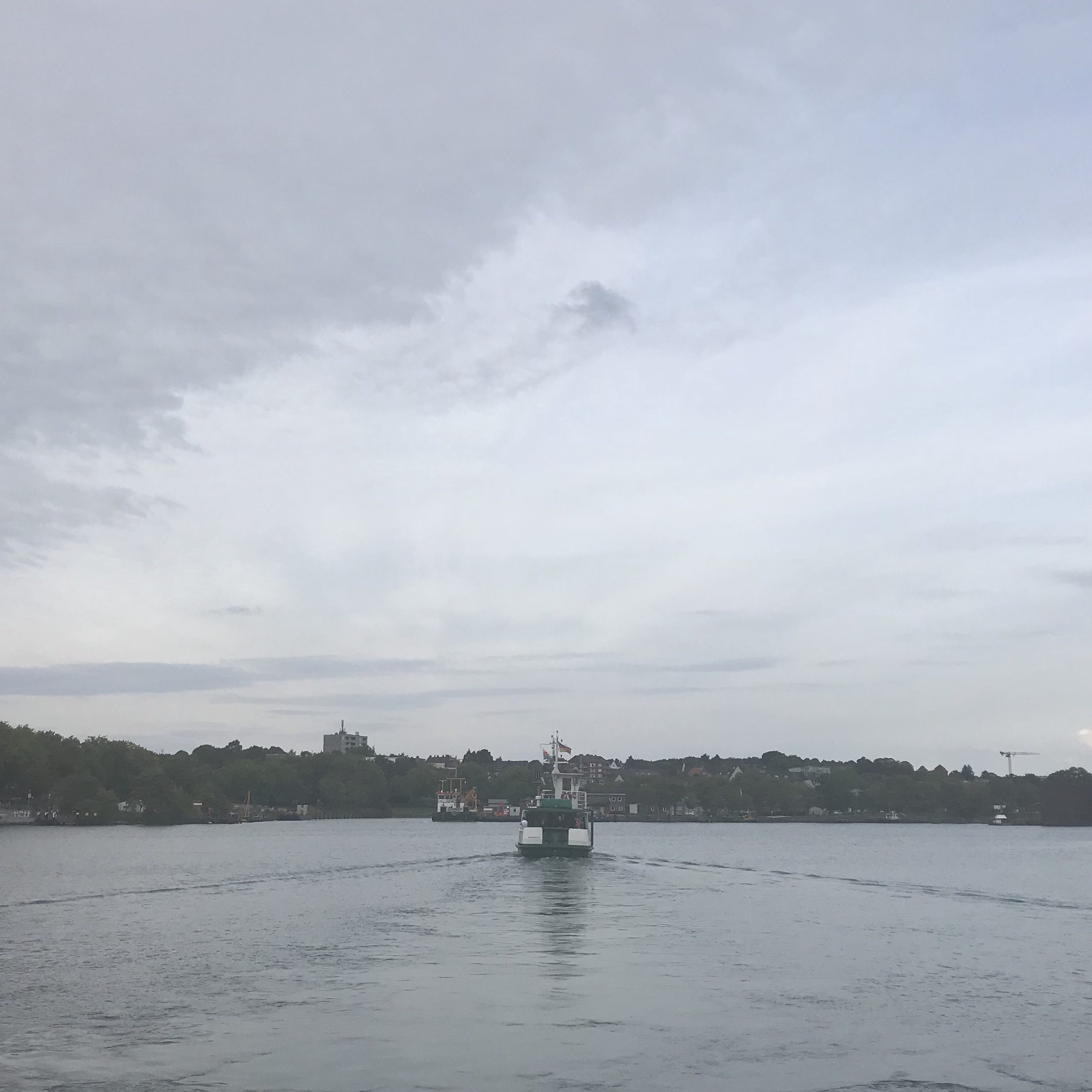 This second, turbulent wake actually changes the water’s surface for quite some time. Propellers put the water in rotation and it slowly entrains surrounding waters, and this turbulent motion looks substantially different from the “normal” sea surface. It can even be spotted from satellites long after the ships are gone. You’ve probably sometimes noticed streaks on the sea even though no ships were present — those might well have been the remains of wakes!

But speaking of ships that have sailed…

Wake of a ship that sailed past a while ago

Here is another example of a wake being visible quite some time after the ship has sailed past. However what we see here is the feather-y train of wavelets from the V reaching the shore. 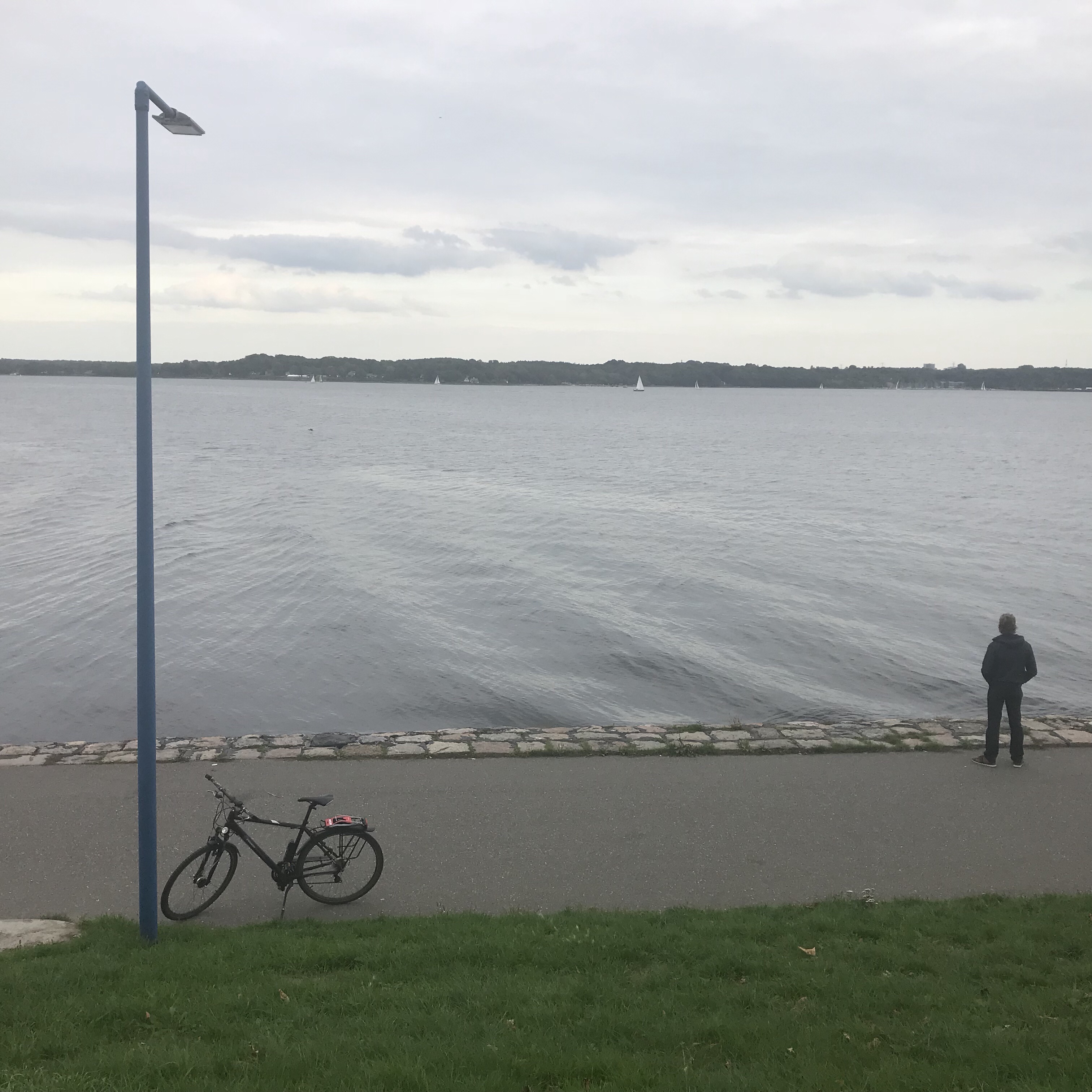 While we were looking at it, my friend mentioned that the waves seemed to approach a lot more slowly than she had expected. That’s because the movement we first notice is the phase velocity of individual wave crests. But when you look closely, you can’t follow one individual wave crest for a very long time, it always appears and you have to start over. That’s because the signal, the V itself, only moves with the group velocity, which moves at half the velocity of the wave crests. That really looks confusing! Unfortunately I didn’t get a good movie of this. But there is always next wave watching session! :-)

And a mystery wave!

But then what would any wave watching session be without a riddle.

Any idea what caused the wave pattern below? Not the obvious, larger waves, but the concentric circle segments that radiate outwards from somewhere in the bottom right? 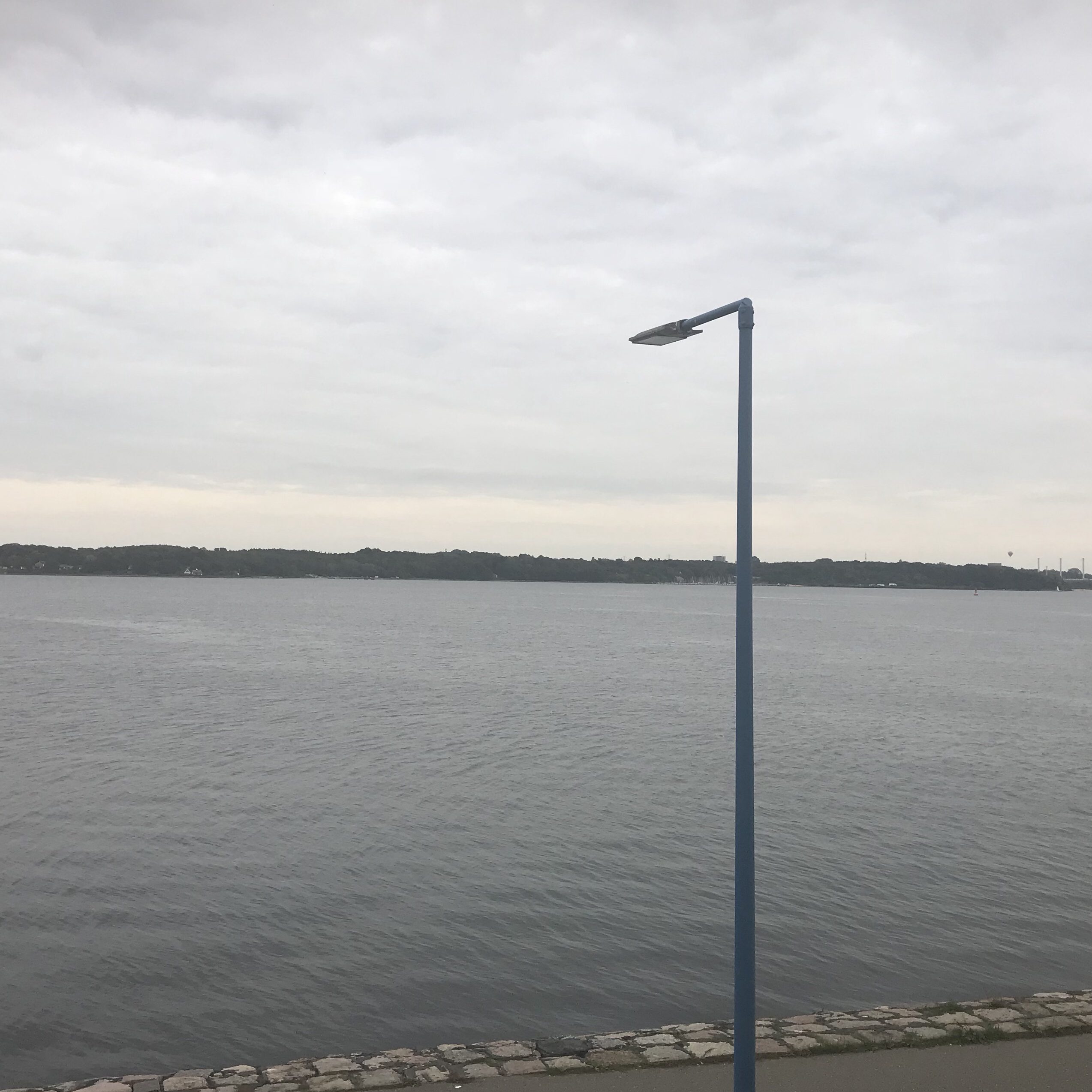 This is a case where it is really helpful when you recognize where the picture was taken, because there is some important information missing from the picture: The straight edge continues on for a little to the right, and then it opens up to a fairly long channel coming in.

However what you do see is the wind direction from the way the water is smooth right at the shoreline and then ripples start to form as you look further away: The wind is blowing out onto the water.

Now combine those two informations and you understand how that wave pattern was generated!

Diffraction at a “slit”

Wind-generated waves move as (more or less) straight crests out of the channel that opens into Kiel fjord just outside the right edge of the picture above. Then, suddenly, they aren’t bound at the sides any more, and what happens looks like diffraction at a slit (except the slit is fairly wide in this case): The straight crests turn and form 90 degree circle segments that radiate outwards. Voila!

Back by popular demand: Reading the water in my mystery pictures series!

Who knows what’s going on in the picture below? You might recognize a couple of details that might give you a hint: There are waves parallel to the rope and drops of water falling from the rope. And here is what happened: A floating rope was repeatedly being pulled up from the water’s surface and then sank back down as the research ship Håkon Mosby moved in swell (white). Each time the rope broke the surface, it caused waves that propagate away from it, the ones we see as lines parallel to the rope (yellow). And when it was pulled up, water dripped from it, so drops falling directly underneath the rope (green) cause the wave rings (red).