I used to hate it when in in-person workshops everybody was asked to give a statement at the end, about what the most important thing was they learned, or how they liked something, or that kind of thing because on the pressure I felt in those situations. But virtually, fo example as a lightening storm in the chat, I rather like the method because it gives an equal voice to everybody instead of a few people dominating everything, and it’s also documented rather than just everybody just quickly saying something before then rushing off. It’s definitely a nice way to get a quick impression from everybody!

Doing this synchronously (as in everybody submitting what they wrote at the same time) also gives you an overview that is less biased as in there wasn’t some kind of group opinion forming as people started talking, that other people later did not want to go against. And sometimes there are weird group dynamics at play when people start off negatively and everybody just keeps piling on…

Another method I quite like: asking students to write a letter to themselves where they reflect on what they learned. This can happen virtually as an email, and I’ve even used it in in-person workshops on paper, where people then put it in a sealed envelope and we sent it out to them a couple of weeks later. I really liked getting those letters from former me, especially when I had set goals or points to follow up on, and was reminded of them! The time delay there is quite useful (spaced repetition? ;-)) and also getting hand-written mail (even if written by myself) is always nice…

Five finger feedback can be done in in-person workshops, but also virtually (for example in a table with five columns where everybody notes down their comments). 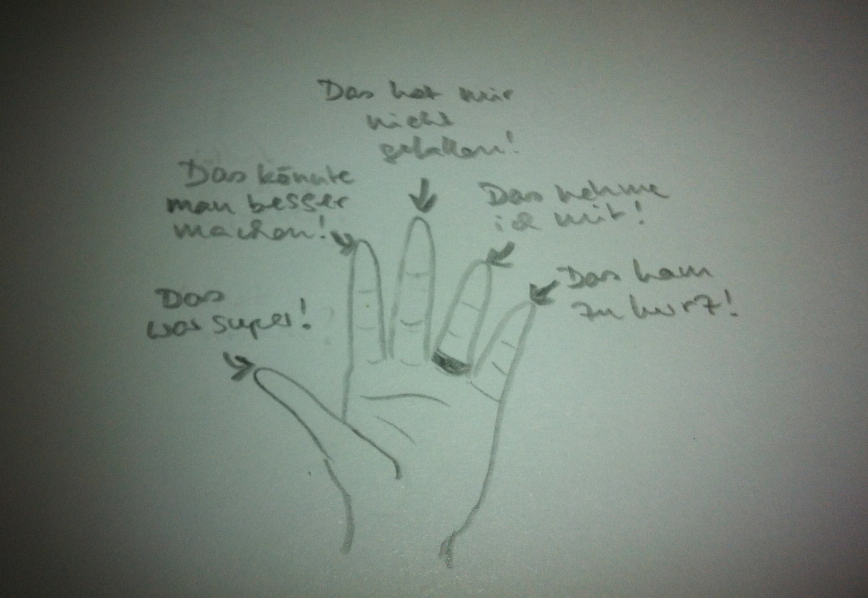 In in-person settings, this tends to take a looong time, and also put too much pressure on participants to make me feel comfortable, but I can see this working a lot better online!

This is another fun method to look at what students want to remember from a lesson: Having a graphic of a suitcase or bag, and then adding sticky notes with the things students want to take away from the workshop. Works offline as well as online! But then it’s not really different from minute papers etc, so maybe use it to spice things up occasionally. Or, if you use it regularly, seeing the graphic of the luggage might already act as trigger for students so they start on the task, without you having to remind them. That might actually also work well!

Coming up with exam questions

Always a great method: Asking students to come up with good exam questions. They can then be discussed in small groups or with the large group, used as exercises practicing for the exam, or even used in the final exam!

But beware: Coming up with good exam questions is really difficult and students might need a lot of guidance, for example discussing a grading rubric and what kind of knowledge and skill should be able to be shown by completing an exam question. And I would always also ask them to provide the solution with the question, otherwise it is really difficult for students to get a good idea of how difficult or easy a question is (usually they become super difficult if students try to make them interesting).

That’s it for now about E.-M. Schumacher’s “Methoden 2 go online!“! There are plenty more where these came from, would you be interested in reading about more?

Related Posts to "#Methods2Go: Methods for feedback and reflection in university teaching":