If you don’t want to “preach to the choir”, how do you, as science communicator, reach new audiences occasionally?

One way that I tried today is to give the (invited, I swear!) laudation at the vernissage of Wlodek Brühl‘s exhibition on “liquid art“. The idea was that visitors would mainly come to the event because they are interested in art itself, but that I will try to give them a new perspective on the art by exposing them to the science behind it. Which I think is a pretty cool concept!

Yesterday, I got a sneak peek into the exhibition which features new art that isn’t even two weeks old! I took pictures of some of the art to show on this blog (with Wlodek’s permission!).

Let’s start with a sculpture that isn’t even part of the actual exhibition but that is displayed in my living room (and I love it!!!): A very simple drop sculpture. A drop fell onto a water surface. Due to surface tension, the water surface deformed, got pulled down, bounced back, overshot, and a drop shot up again, pulling a thin trail behind it. As the drop was flying upwards, it got hit by a second drop which fell straight on it. That second drop splattered into this umbrella, which is starting to disintegrate into small instabilities that form tiny filaments. A fraction of a second later and the whole thing would have collapsed and look totally different. 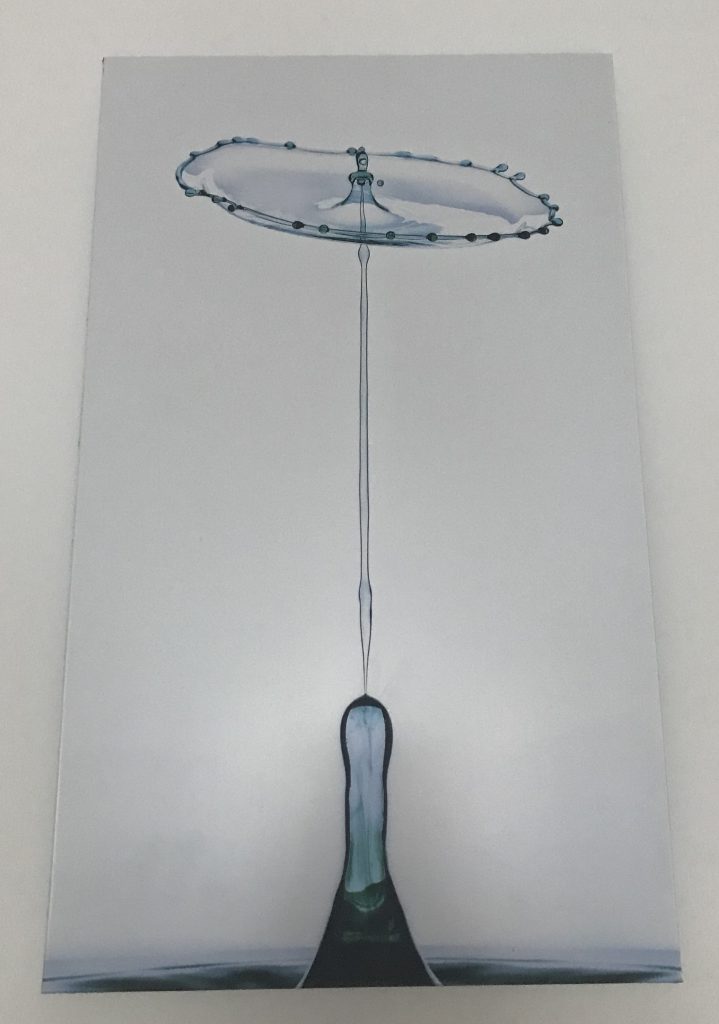 That’s part of the art of capturing these sculptures: timing. Not only does one need to be super precise in the timing of drop releases, one also needs to capture the exact right moment to light the dark room with a flash, which is a lot shorter than the exposure time of the camera. Of course it’s all controlled by a computer!

But here is an impression of the exhibition itself. 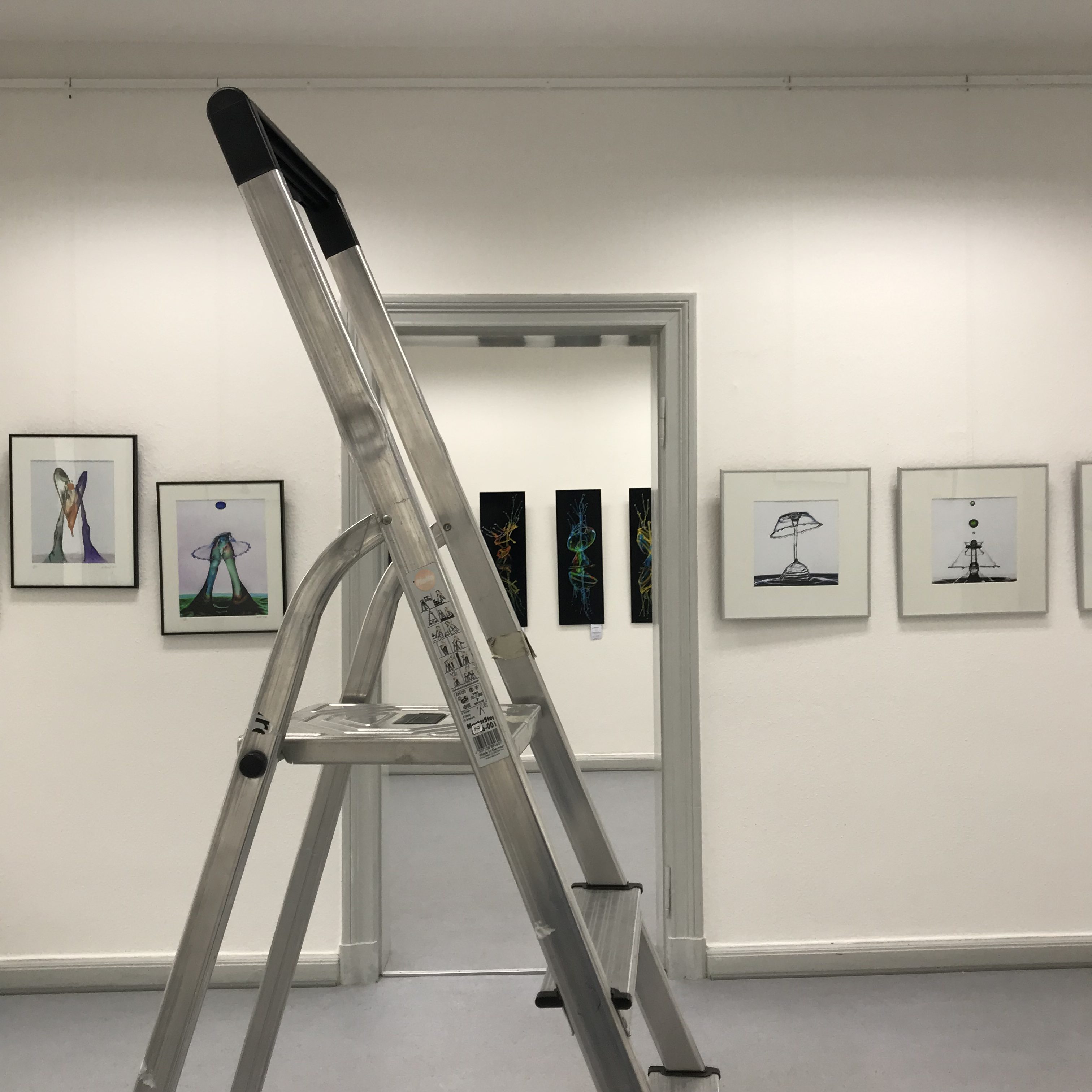 I’d like to start out with some of the older art from 2016 which is easier to explain: “Simple” drops like you see to the right of the door above, then double pillars to the left of the door, and then reflections, before we move on to the kind of art that you saw at the top of this post.

In the picture below, what happened is pretty similar to what happened in the picture above: A drop fell, bounced back up again and was hit by a second drop. The second drop hit the first one when that one was still fairly fast, therefore the vase-like structure. (And don’t you just love the waves that you see on the water surface? I feel like I see the actual dynamic process of the surface rising up!) 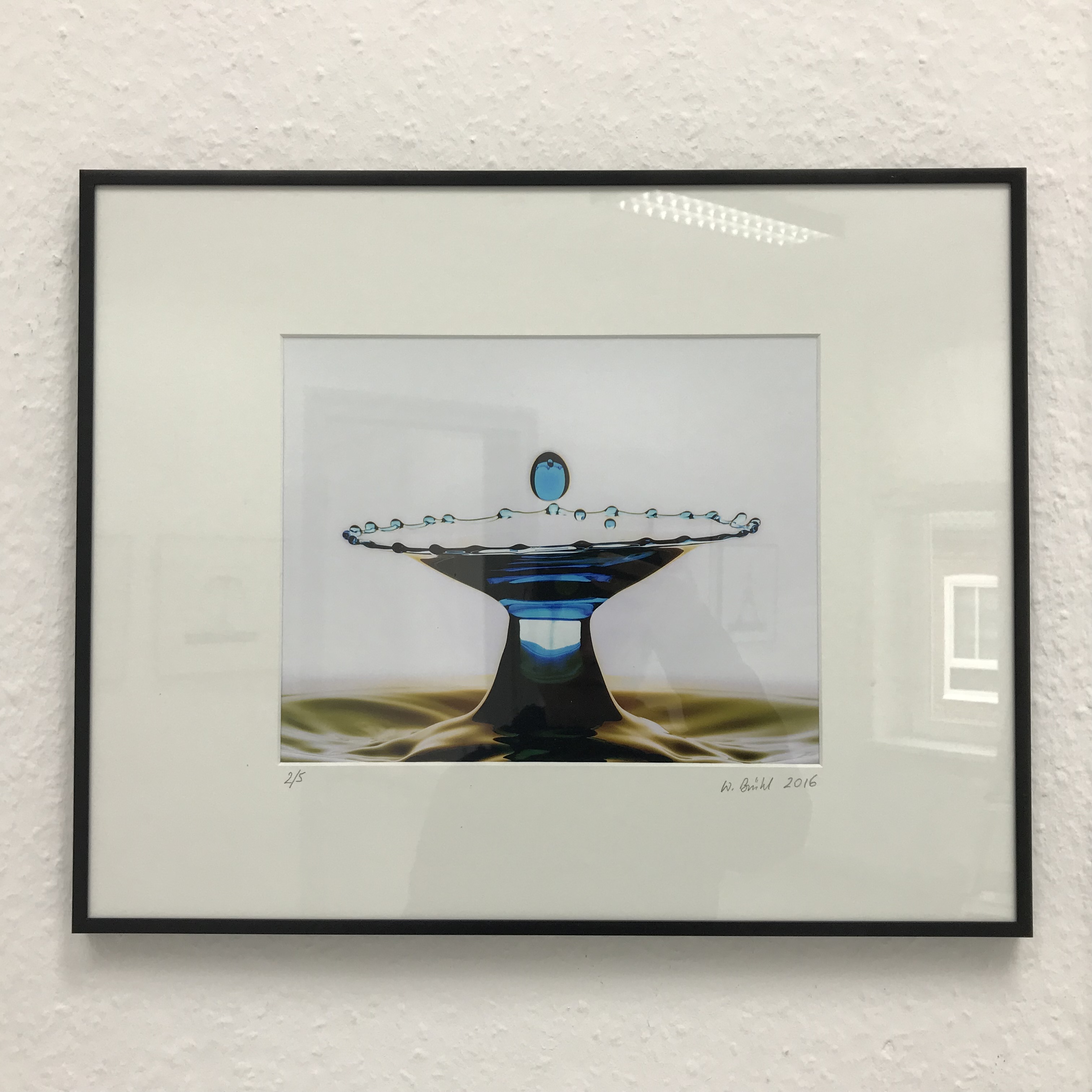 Or below, another similar setup, except here the drops collided in such a way that the larger, bottom one formed an umbrella-like shape, whereas the upper one rose as a vase. 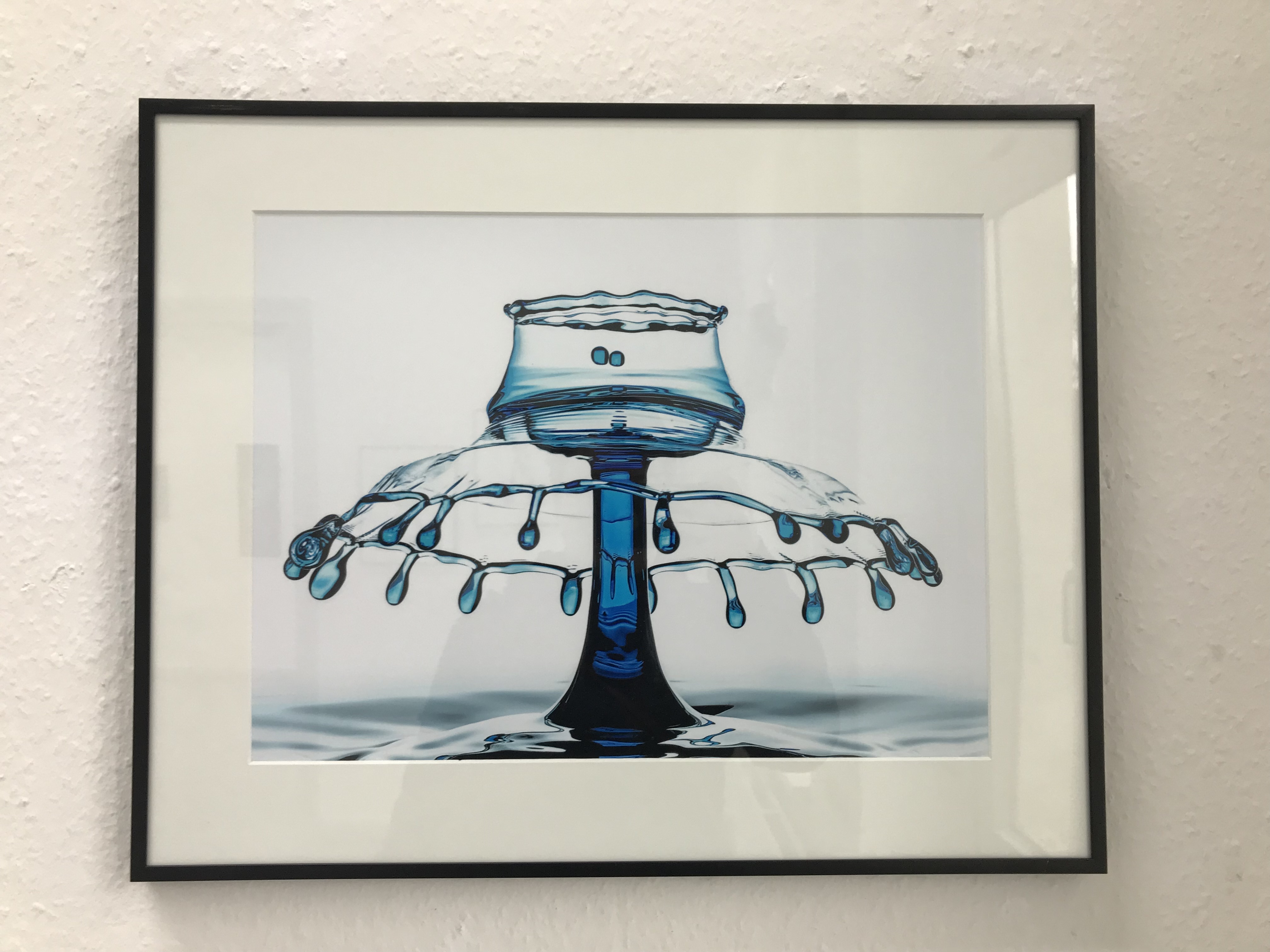 It gets more complicated if two drops are released simultaneously as below, and then a third one hits them in the middle with a little time delay to form the umbrella, and a fourth drop is still falling down and hasn’t reached the sculpture yet.

So much for the “simple” structures, now on to more complicated ones. The ones below are similar in their setup to the ones above, but now they are photographed against a black background and in a large, black dish. Therefore we see the reflection of the sculpture on the water surface. This lets us look at different structures within the sculpture from two angles, making it even cooler to think about all the physics going on here! 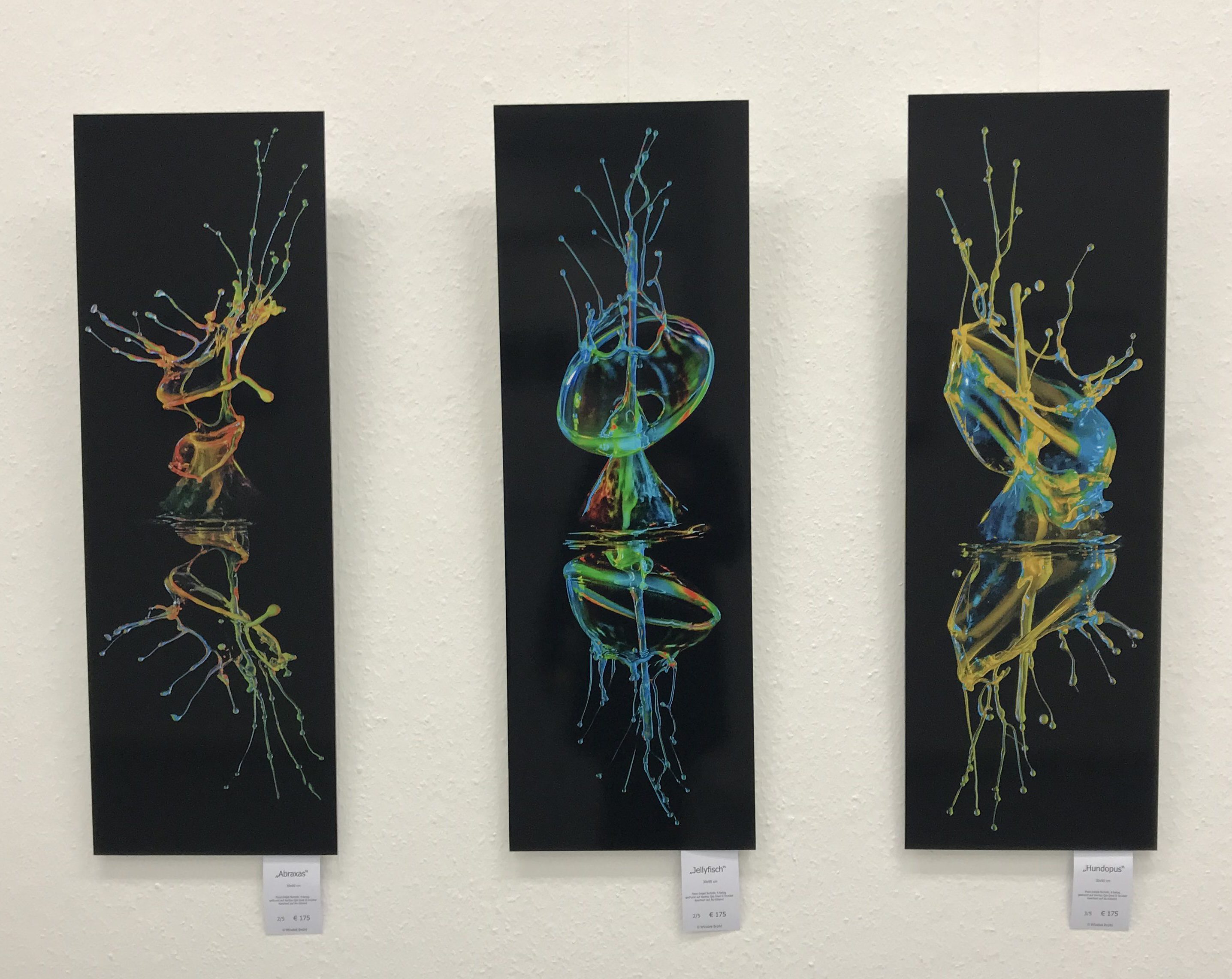 But now on to stuff done with more fun toys: 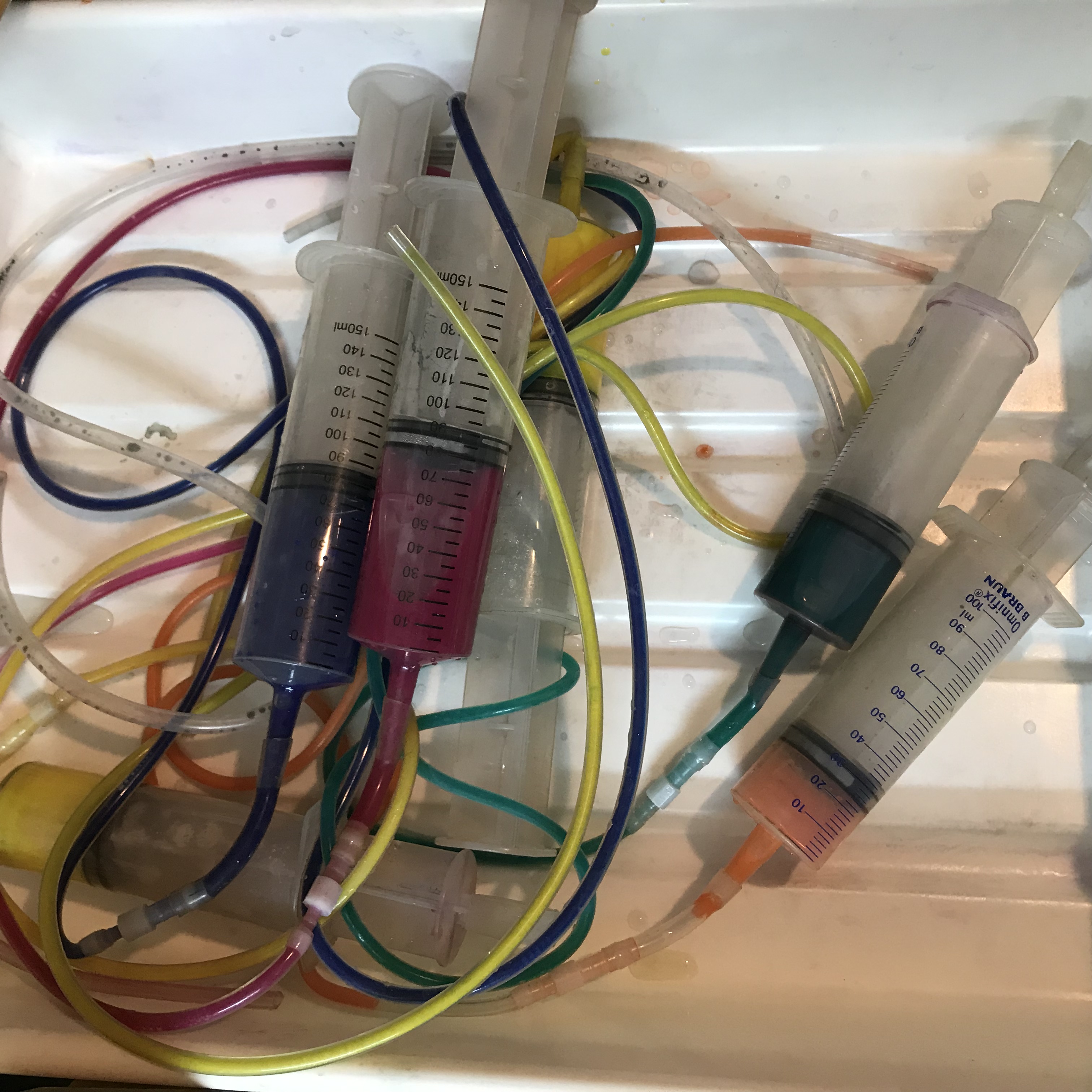 These are the newest works of art that Wlodek did only within the last two weeks! I personally prefer the translucent, fragile, light sculptures like the one in my living room, but I can also really appreciate those bouquets of spring flowers for their dynamic and lively shapes.

Below I am showing a larger version of the sculpture to the very right above. In these new sculptures, Wlodek isn’t “only” working with drops, but now he has started to incorporate colored jets that are driven up by pressurised air. See how the yellow central jet broke through the umbrella formed by the orange drop that dripped on it from above?

Additionally, Wlodek is building vases around the bouquets by pushing dyed water through a rotating turbine. This vase breaks up into tentacles when it gets unstable!

The sculpture below is called “sundae with umbrella” and I cannot un-see this! 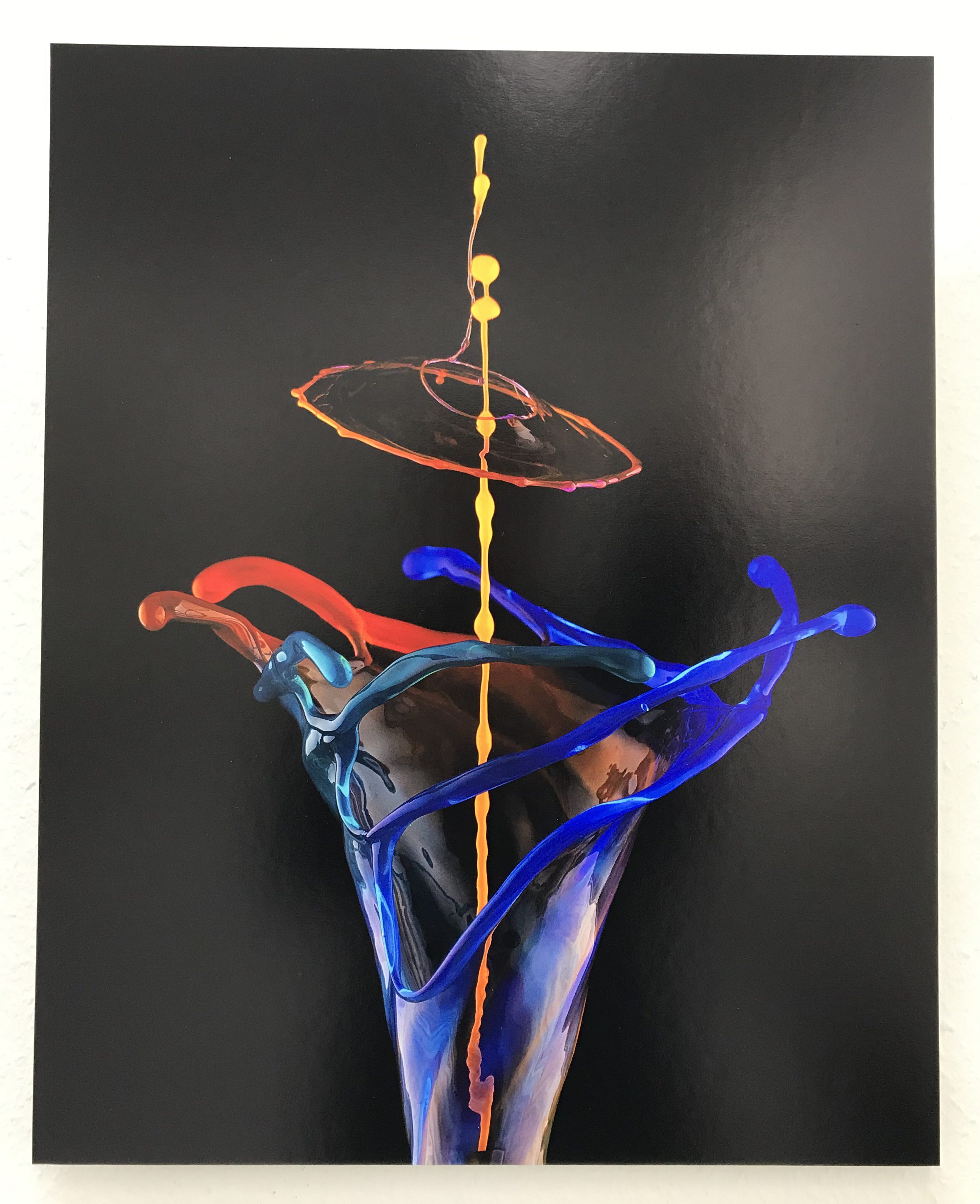 But mostly I see flowers, specifically orchids. Below, the yellow drop from the top didn’t hit the green-ish jet from below completely center, therefore the latter broke up and seems to be turning towards us, wrapped in the orangey-yellow vase that has become very unstable on one side, but not so much in the back. Don’t you just love how the rims bulge together due to surface tension? 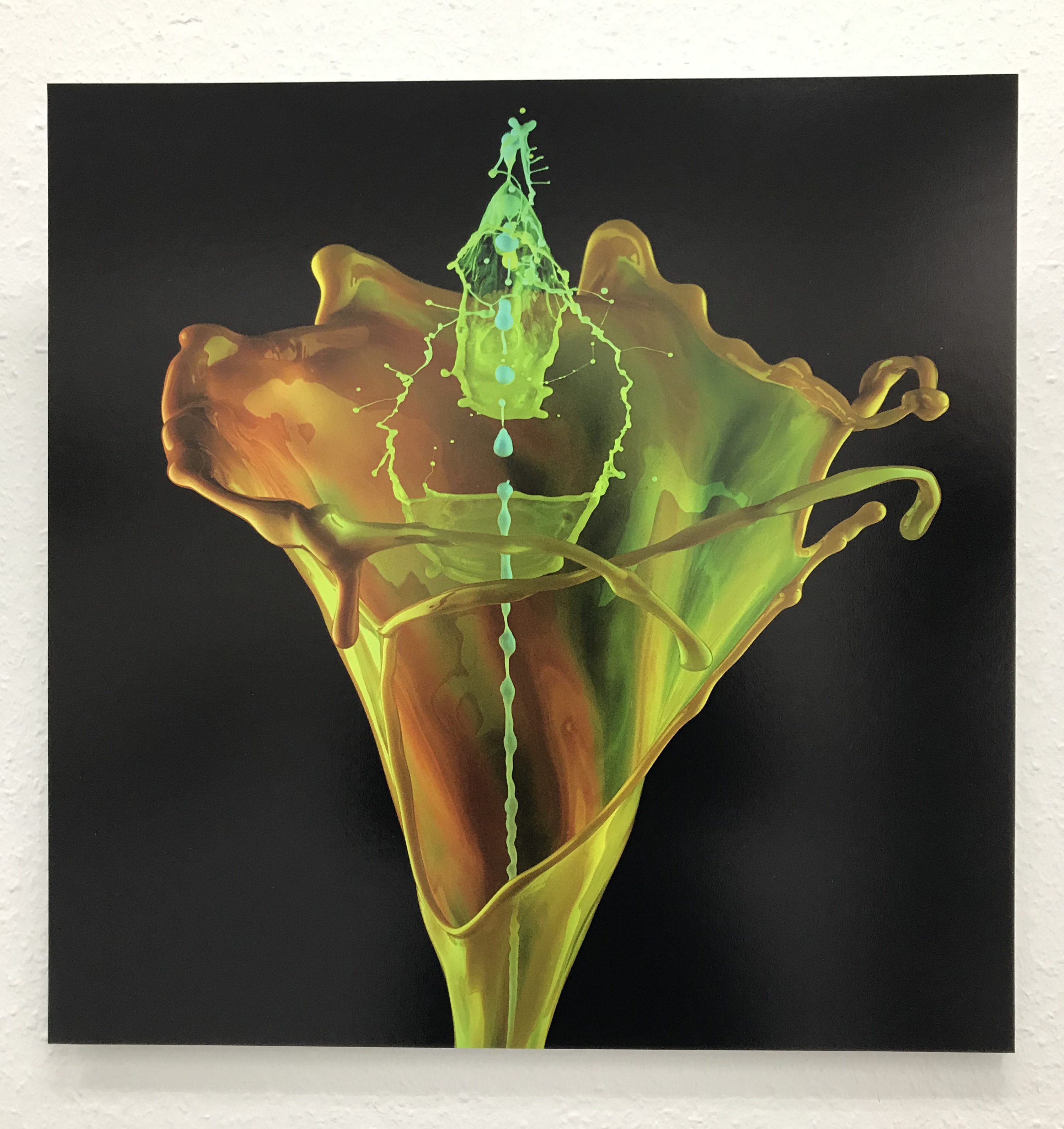 In any case, I had a blast, even though, judging from the picture below that shows me giving the laudation, it doesn’t seem like it. Do I always look this serious? But the feedback I got was that everybody enjoyed looking at Wlodek’s art through a physics lense, at least after they got over their initial shock that they would have to listen to physics on their artsy Sunday morning. So this is definitely a scicomm format I want to explore more! 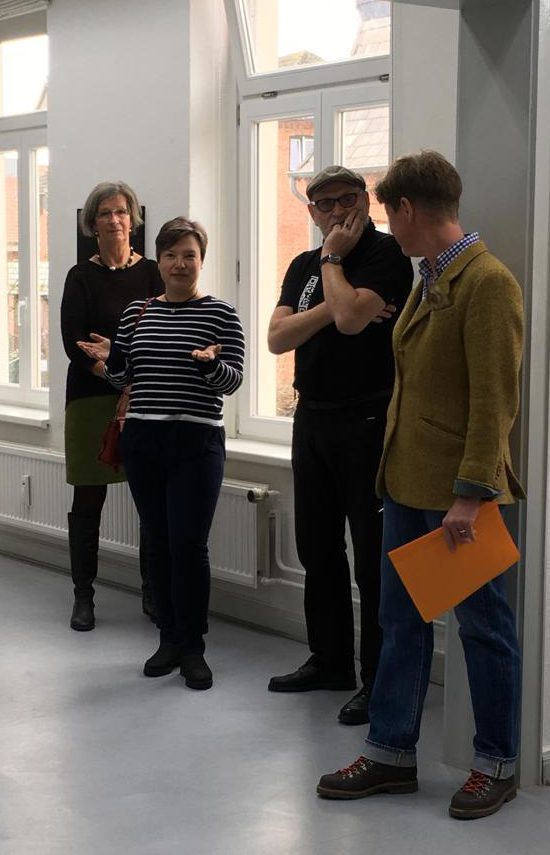 Me (in stripes) with the artists Regine Hahn (left) and Wlodek Brühl, as well as the host, chairwoman of Kunstkreis Preetz. Picture by Frauke Voitle, used with permission.

Related Posts to "Vernissage of "liquid art": The perfect opportunity to combine art & physics to do some scicomm!":

3 thoughts on “Vernissage of “liquid art”: The perfect opportunity to combine art & physics to do some scicomm!”