A very common idea of what goes on in our tank is that we have a tiny Antarctica in the center and that the edge of our tank then represents the equator. We are rotating in Southern Hemisphere direction, clockwise when looked from above the pole. And when looking at the Earth that way, where the Earth seems to end is at the equator. It makes sense to intuitively assume that the edge of the tank then also represents “the end of the world”, i.e. the equator.

But then it is confusing that our Antarctica is so big relative to a whole hemisphere and that we don’t have any other continents in our tank. And it’s confusing because the idea that the edge of our tank represents the equator is actually wrong.

Let’s look at the Coriolis parameter. The Coriolis parameter is defined as f=2 ω sin(φ). ω is the rotation of the Earth, which is  so constant everywhere. φ, however, is the latitude. So φ is 90 at the North Pole, -90 at the South Pole, and 0 at the equator. And this is where the problem arises: The Coriolis parameter depends on the latitude, which means that it changes with latitude! From being highest at the poles (technically: Being highest at the North Pole and the same value but opposite sign at the South Pole) to being zero at the equator. And with the latitude φ obviously changes also sin(φ), and f with both of those.

Sketch of f as a function of latitude 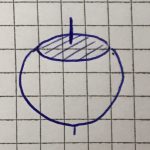 How we simulate f in a tank

This means that we actually cannot simulate anything in our tank that requires a change in f, much less half the Earth! So currently no equator in our tank (although that would be so much easier: No need to rotate anything since f=0 there! :-)

*which, in contrast to my sketch above, is well in the Northern Hemisphere and not at the equator, but I am currently sitting at Lisbon Airport and this sketch is the best I can do right now… Hope you appreciate the dedication to blogging ;-)

Related Posts to "No, the edge of our tank is not "the equator"":