We’ve been talking about stream lines a lot recently (see for example the flow around a paddle or flow around other stuff). I’ve always heard stories about a neat way of visualizing stream lines that I wanted to show on my blog. So I set out to try it, but it just never worked exactly the way I had imagined it should. Anyway, here you go:

We take paper towels and cut an “obstacle” in it. In this case, it’s a drop-shape. The paper towel is set up such that one end is dunked in water, and that once the water has been sucked up a little, it neatly flows down a slope through the towel. In the picture below you see that the water just came over the edge of the cutting boards. 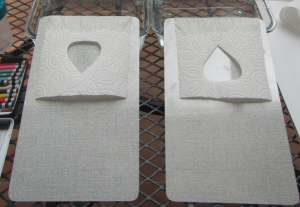 So once a flow has established (and only then, because I wanted to go for steady state stream lines, not some stuff that happens while things are still adjusting), I started dotting dye in to trace the flow: 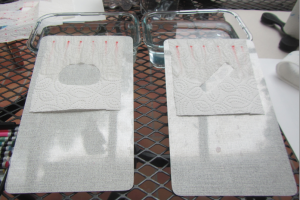 As you can see, each dot leaves a streak. In this case, though, the streaks are not nearly clear enough for me, so I decided to “recharge” a little further downstream (making sure I put the dye exactly on one of the stream lines, obviously). 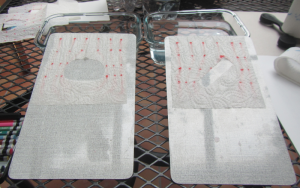 And voila! The flow really goes around the object similarly to what we would have imagined. And this is what the finished drop-shaped obstacle looks like:

As you see, next time it’s important to make sure there is more paper towel left downstream of the obstacle. We already get interference from the bottom edge of the paper towel where the flow is interrupted.

It’s also important to figure out what kinds of pens work: The picture below is from a test I did at my parents’ which worked a lot better than the pens I tried above. 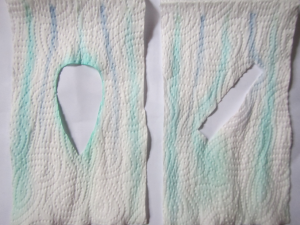 And finally I am not sure how the embossed pattern in the paper towel influences the flow. So maybe I should try and find something with either a smaller pattern or something more regular. Plenty to do still!

So, all in all: Interesting visualization which I am definitely going to try again at some point, but there are still a couple of kinks I need to find fixes for!