Visualization of how much salt is actually contained in sea water.

When preparing “sea water samples” for class, it is always astonishing to me how much salt I have to add for normal open-ocean salinities. Time and time again it looks like it should be way too much, but then when tasting it, it tastes salty, but like the ocean and not like brine.

A teaspoon full of salt corresponds to approximately 5 grams. That means that for typical open-ocean salinities, you have to add 7 teaspoons full of salt to a liter of water.

Since it is still astonishing to us, Pierre and I thought, it would probably be a good thing to show to our students. 0.18 teaspoon full of salt corresponds to only 1 gram of salt (averaged over several non-scientific internet sources, but well within the measurement error of my kitchen scales [and yes, I know the trick of measuring the weight of several spoons and then dividing by the number, but thanks!]).

What I want to do in the lecture is have the students estimate how much salt they need for a 35 psu liter of water. And not estimate by weighing (because I want each of the students to be able to touch the salt, but at the same time don’t want salt all over the lecture theatre), but visually estimate.

10 grams of salt in a little plastic jar.

The little jar in the picture above contains 10 grams of salt. So in order to have students estimate how much salt they would need for a liter of 35psu water, we filled 12 of those little jars with 10 grams each and handed them to the students. Obviously we didn’t tell the students how much salt was contained in a jar! 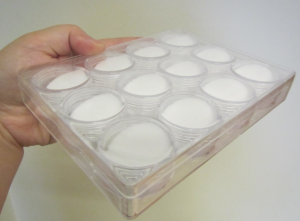 Knowing that there are 10 grams of salt in each of the jars, it is pretty obvious that we need three and a half of those little jars for 35 grams of salt. When we did this in the lecture on Tuesday – and again, the students were not told how much salt was in one jar! -, the first person who answered guessed “four”. And then someone actually said “three and a half”. Oh well, lucky guess or great skill? I was hoping for answers like “maybe one of those jars”, because that would be closer to my own intuition. I guess next time I’ll be framing it differently. Maybe use something with one liter volume and put 35 grams in it? Or ask them to tell me in teaspoons? Does anyone have a good idea that they would like to share with me?

Related Posts to "How much salt is there in sea water?":

6 thoughts on “How much salt is there in sea water?”