Different methods to project the sun to watch it safely.

During our recent PBL workshop, we came up with a number of different ways to watch a solar eclipse by projecting the sun’s image on a screen, using “household items” (which was the task we had set). Many different methods are shown here:

Below are descriptions of the different projectors, starting with the easiest and becoming more and more difficult as you read along.

The easiest way to watch a solar eclipse anyone can imagine is the green card you see in the picture above: It’s just a piece of cardboard with a hole in the middle. The result might not be the most exciting of all, but in the picture below you see the small projection at the bottom right corner with a small bit bitten out of it. Not too bad for a no-tech version of a projector!

“Solar projector”. Cardboard with a pin hole in the middle. See the projected image of the sun in the bottom right corner of the picture?

Next time one might want to use darker cardboard. But since this was just a proof of concept, I was happy enough with it.

Participant F brought a cardboard chips tube which she cut in half, added sandwich paper in the middle, made a tiny hole in the bottom of the can and voila: projector.

While she was disappointed by the size of the image, I thought it was pretty cool:

Projection of the solar eclipse in the chips can projector. See how the left part of the sun is missing?

One projector that was amazingly easy to set up (provided you have binoculars handy) and that gave pretty impressive results is shown here: 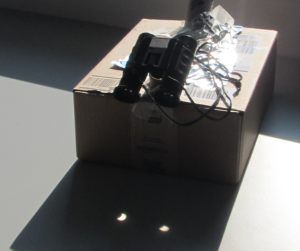 So easy, yet so effective!

This is a project that had great potential, only we gave up on adjusting everything properly because all the other projectors were set up already and it was too exciting to watch the solar eclipse.

Anna and Siska building a projector

I think here the sun was projected on a screen inside the box, which you could look at through a tube. And the other tube is covered on top except for a tiny hole.

I know it is cheating a bit, but I decided to have the solar projector I talked about last week count as a “household item”. And it is, because I had it at home before we wrote the solar eclipse PBL case!

The projections with the real projector were super impressive:

Projection of the solar eclipse in a real projector

In fact, we could even watch solar spots on the sun. I will definitely bring out this projector again long before the next solar eclipse!

Projection of the solar eclipse. Can you spot the sun spots?

This one we didn’t try out ourselves (even though I had brought all the materials, but as I said above, we got so caught up observing that we didn’t pursue all the different options), so the pictures are from my mom’s school where my mom and my dad (and 20 something kids, I suspect*) had to play, too. See the tripod for scale – this projector is a lot bigger than anything we built at my work! 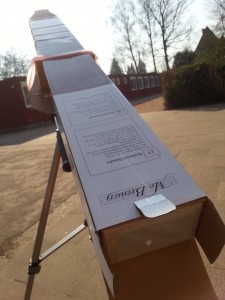 And their projections look pretty impressive, too:

Projection of the solar eclipse

By the time the sun was covered that much, the sky was completely overcast at my work. But it looks like the kids got to see a pretty impressive solar eclipse!

*because, funnily enough, lots of classes weren’t allowed to watch the solar eclipse but had to sit inside with the curtains closed. Because on this one day the sun was clearly so much more dangerous than on any other given day, especially when watching only a projection of it (and there are tons of methods to do that as you might have noticed from the post above…). Always amazing  how stupid some people are…

In preparation of our solar eclipse PBL workshop, my parents came to play. And they brought the Astromedia solar projector cardboard kit! It took us the better part of a day to assemble, but when we were done we could even test it in a sunny corner of my couch!

There were tiny twigs between the projector and the sun, which made for beautiful projections.

Plus it was amazing to watch how fast the sun was moving (or, to be precise, the Earth was turning). In the space of 30 seconds, the projection changed from the left to the right photo below!

Shadows of twigs. Absolutely same angle and everything, 30 seconds apart.