END_OF_DOCUMENT_TOKEN_TO_BE_REPLACED

With all the rotating tank experiments I’ve been showing lately, one thing that comes up over and over again is the issue of solid body rotation.

On our DIYnamics-inspired turntable for our “dry theory to juicy reality” project, Torge and I came up with a fun way to illustrate the importance of full body rotation in tank experiments, again inspired by the DIYnamics team, this time their youtube channel.

For the spinning dye curtain experiment, we start up the rotating table, and then pretty much immediately add in some dye. Below, you see what happens when you add in the dye too late (we waited for 2 minutes here before we added it): The water is so much in solid body rotation already, that we only form columns and 2D flow. 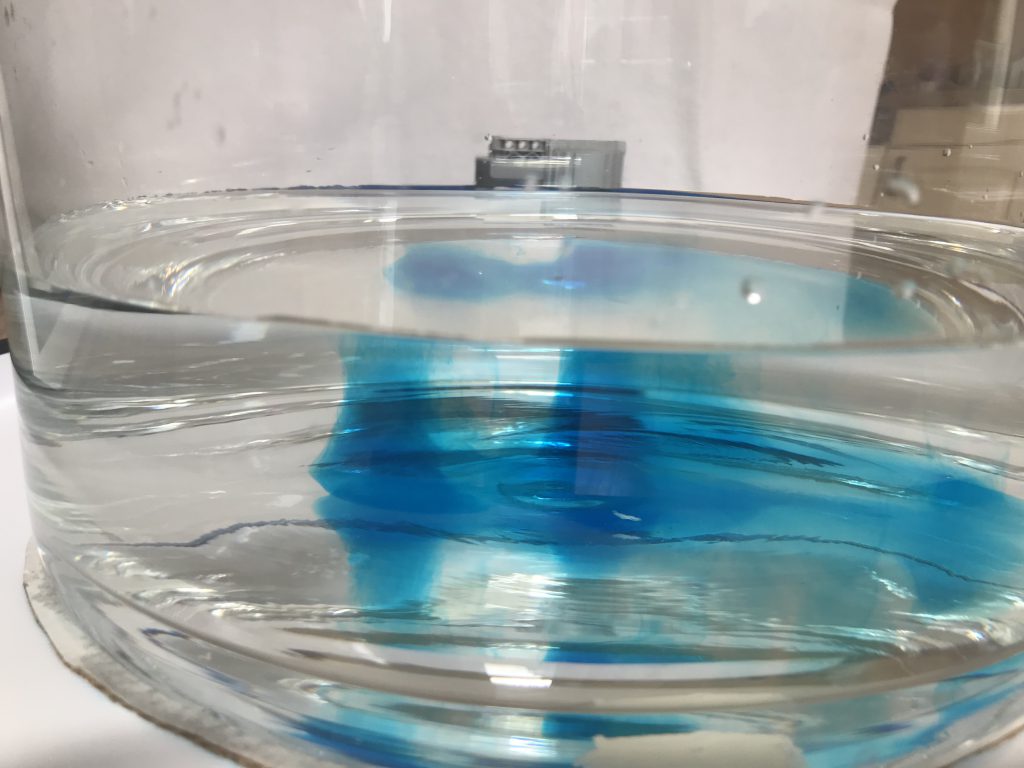 But if we add in the dye right away after starting up the tank, we form these spirals where the water further away from the center is spinning faster than the water right at the center, thus distorting the dye patches into long, thin filaments (Btw, I’ve shown something similar in my “eddies in a jar” experiment earlier, where instead of starting up a turntable I just stirred water in a cylindrical tank). 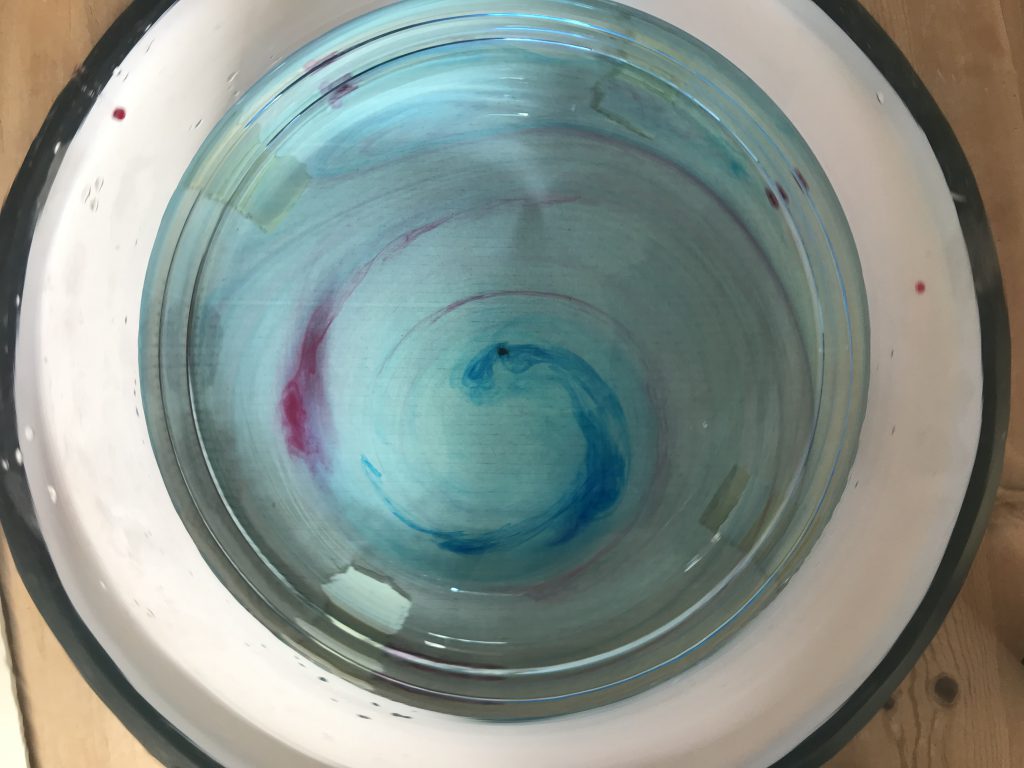 But as the tank continues to spin up, the eddies eventually stop spinning and the tank turns into solid body rotation. If new dye is added now, only columns form, but they stay intact as if they were, indeed, solid bodies. 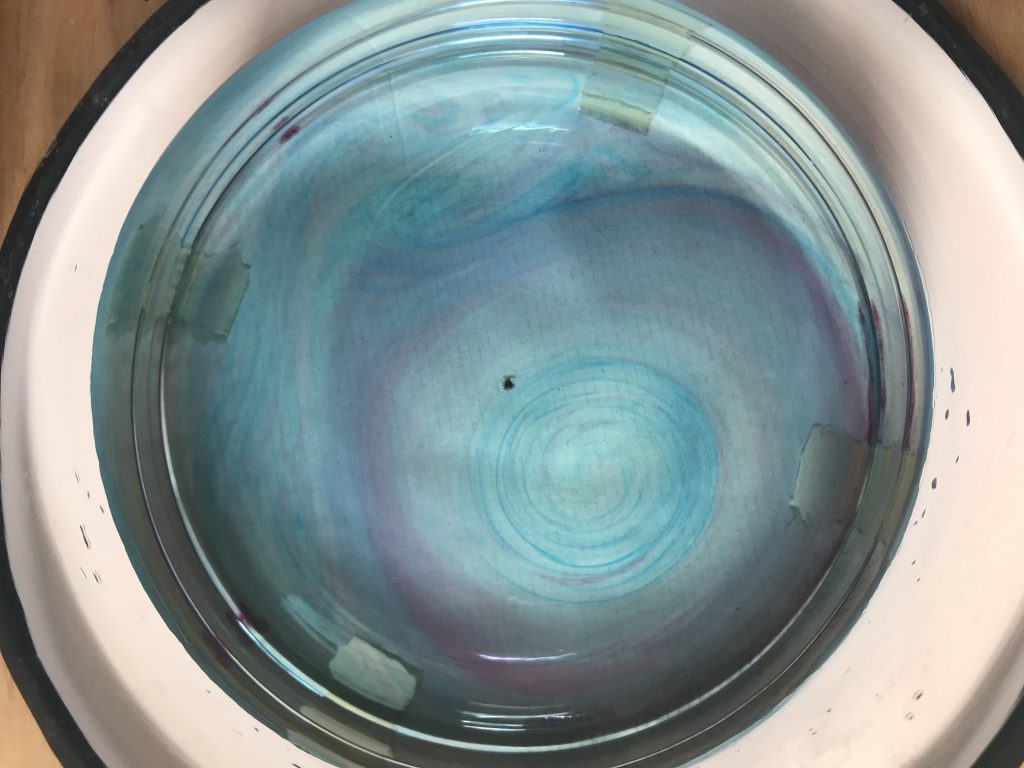 But seeing the behaviour of a fluid change within half a minute or so is really impressive and something we definitely want to do in class, too!

It’s bugging me that I don’t really understand what’s going on here or why… But look at how these eddies form on the beach right outside my window and for how long they persist!! Eddies. Dips in the surface and shadows on the ground.

I always get really fascinated by watching how eddies are generated by obstacles in a fluid. But it is especially exciting when you don’t only see the eddies because you see how they deform the surface, but when the water is clear enough so you can see the “shadows” on the ground! But isn’t it fascinating to watch how eddies form when the water passes the stick and stones in the water when there is absolutely nothing going on upstream?

Rotating experiments in your kitchen.

Do you know those Saturday mornings when you wake up and just know that you have to do oceanography experiments? I had one of those last weekend. Unfortunately, I didn’t have a rotating table at hand, but luckily most of my experiments work better than the exploding water balloon time-lapse I showed you on Monday, so this is what I did: 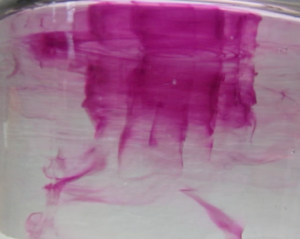 I took a large cylindrical jar, filled it with water, stirred, let it settle down a little bit and then injected dye at the surface, radially outward from the center. Because the rotating body of water is slowed down by friction with the jar, the center spins faster than the outer water, and the dye streak gets deformed into a spiral. The sheet stays visible for a very long time, even as it gets wound up tighter and tighter. And you can see the whole eddy wobble a bit (or pulsate might be the more technical term) because I introduced turbulence when I stopped stirring. So pretty, the whole experiment. And so satisfying if you need a really quick fix of oceanography on a Saturday morning!

Watch the movie below if you want to see more. Or even better: Go play yourself! It’s easier than making one of those microwave mug cakes and sooo goooooood :-)