My friend Alice runs a really interesting Instagram account that I love following. She posts about being a PhD student in physics didactics, does #experimentalfriday (which you might remember from her recent guest post on my blog), gives helpful advice for mental health topics and takes beautiful pictures. Check it out — @scied_alice. A couple of days ago she posted about having found some research on how proximity to the ocean and a person’s state of mind are connected. So obviously I had to ask whether she would write about it for my blog, and I am super stoked she did! Here is what she writes:

When was the last time you were at the sea and just took in everything it offered? The smell of salty water, the light breeze on your skin, the sound of rolling waves. Do you remember the feeling it gave you? That sense of calmness and relaxation, the inner peace and quiet, ultimately setting you in a state of easy meditation, giving you that break from everyday life you just needed? The impact of the ocean on physical, mental and emotional well-being seems so obvious and intuitive but there is actual scientific research on that topic. Who wouldn’t want to understand what exactly is going on in the humans’ mind and body when encountered with the ocean or any great body of water? So let me tell you about some of the findings I stumbled upon, researching a short post on why I myself like to live at the coast of the Baltic Sea. 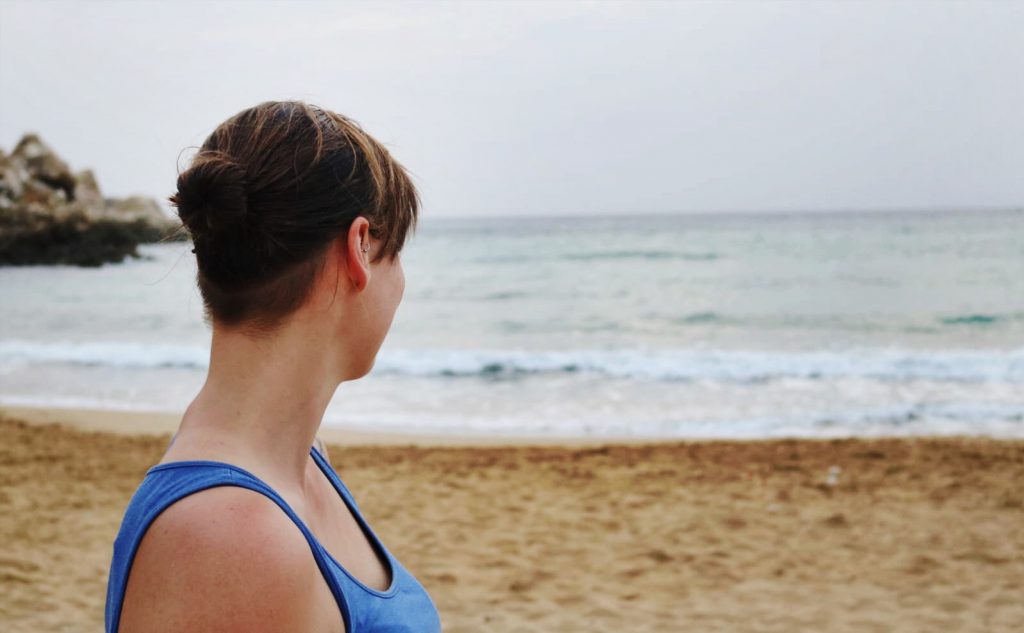 It seems like yesterday, that the professor giving a speech at my graduation ceremony talked about the happiness level in several states in Germany and how lucky we are if we get a job in Schleswig-Holstein, which scored the happiest state several years in a row now (Schlinkert & Raffelhüschen, 2018). I had to smile because at that moment I had already taken a job in Kiel, the state capitol of Schleswig-Holstein. Apparently, the proximity to the coast and the access to blue (water) space has shown to have a positive effect on well-being. This could be one factor explaining the happiness level in Schleswig-Holstein, because the state is enclosed between the North and the Baltic Sea on each side and everyone I know enjoys that advantage to its fullest by spending lots of time at the waterfront. According to a British study, citizens living at the coast report better physical and mental health (White, Alcock, Wheeler, & Depledge, 2013)and Japanese colleagues, Peng and Yamashita(2016), concluded that people with ocean view from their homes were calmer than their inland neighbors. And if you are thinking of choosing a retirement home at the coast, they have good news as well: positive psychological effects were highest for elderly people. 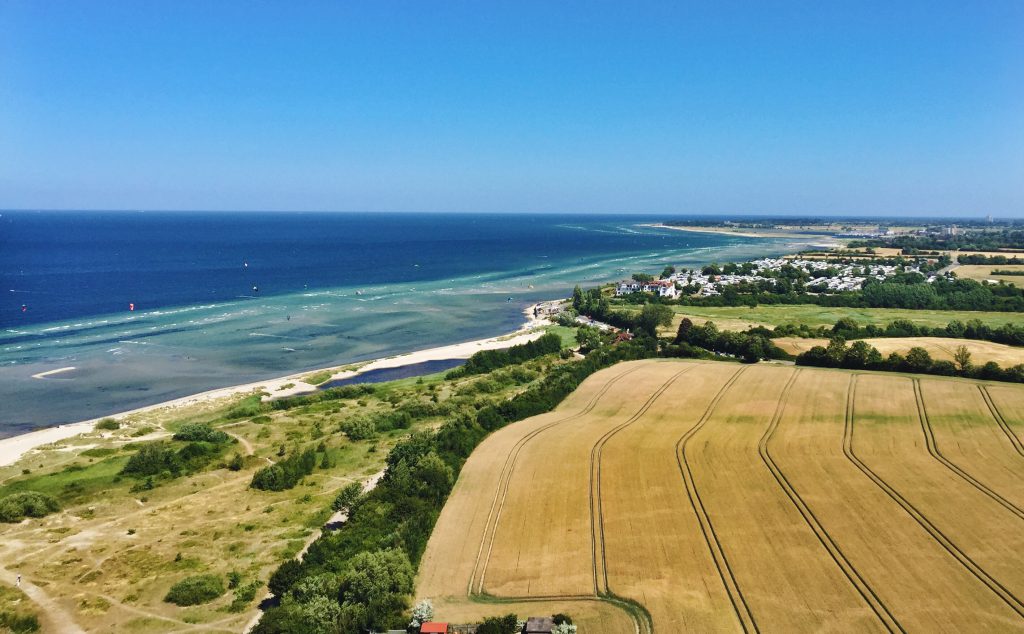 There seems to be something happening to people when visiting the beach or waterfront and scientific research finds answers to that in our senses. The feeling of calmness, relaxation and peace is stimulated by the view of the blue space. A study conducted in Wellington, NZ showed lower psychological distress in people with visibility of what they called blue space, images of the Pacific Ocean and the Tasman Sea (Nutsford, Pearson, Kingham, & Reitsma, 2016). Neuroscientist Michael Merzenich claims that being in the clear and simple environment of the ocean, humans have a sense of security and safety because it’s a stable and predictable environment (Yeoman, 2013). Makes sense, doesn’t it? Because everything unusual is instantly outstanding against the calm and flat horizon. 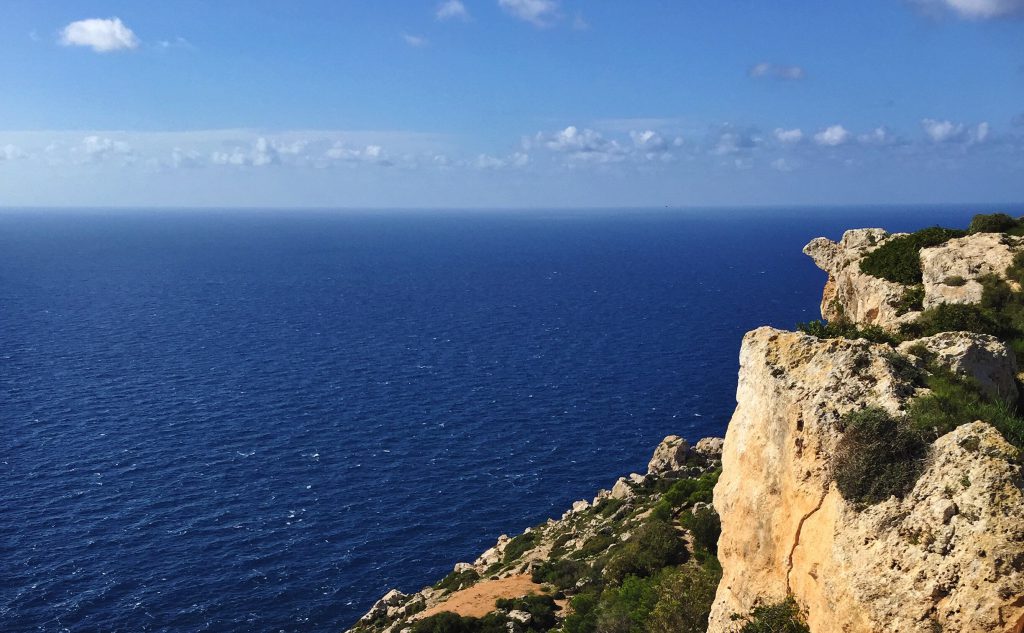 And there is even more to a visit to the beach than just the view of water. It’s the sheer sound of incoming waves that soothes the mind and relaxes the spirit. Sounds with wave patterns were found to be the most relaxing because they lower the cortisol level, a stress hormone and activate the parasympathetic nervous system, slowing us down and promoting relaxation (Heiser, 2017). This has the same effect as meditation. 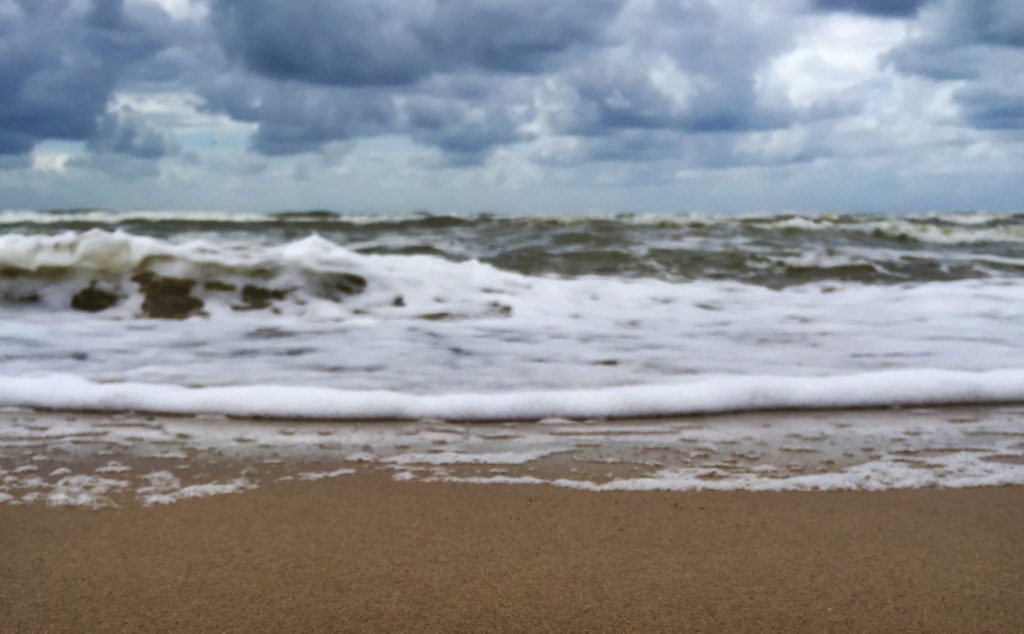 So the next time you’re at the beach: Take everything in, take a deep breath, concentrate on your body and the calmness the ocean triggers in you and enhance those positive effects the ocean has on you! Enjoy!

Heiser, C. (2017). What the beach does to your brain. Retrieved from https://www.nbcnews.com/better/health/what-beach-does-your-brain-ncna787231

Yeoman, B. (2013). Why the Beach Makes Us Happy. Retrieved from http://barryyeoman.com/2013/02/beach-happiness-neuroconservation/

My friend Alice Langhans runs a super cool science communication Instagram (@edu_al_ice), where she posts about her experiences as PhD student in physics education research. And there is a lot more going on on that Instagram than just pretty (but oh so pretty!) pictures. I make sure to read all her posts, because there are always interesting, motivating, inspiring thoughts hidden behind that “read more” button. And now she’s even started a new series of physics experiments on #experimentalfriday, and I am super excited that she wrote this guest post for me!

But now look at the picture below, and then read about some magic! :-)

Magic! One of the arrows changes its direction and here is why: 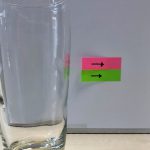 First, the arrows are unchanged and visible through the glass. 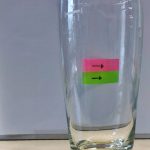 Adding water to the glass, the image of the arrow gets bigger and appears mirrored! 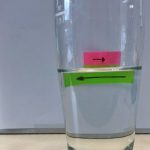 With even more water even the second arrow appears bigger and mirrored. 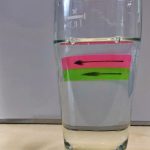 The waterglass I used is round and the refraction of light in water is different than in air, which makes the water glass act like a positive (converging) lens. This is why the image of the arrow appears bigger and mirrored.

Think of the arrow as many points, each of which is the source of a divergent bundle of light. The light coming from the point that is the arrowhead on the right, is refracted through the waterglass and reaches our eye to the left. The light from the left end of the arrow refracts in such a way that it now enters our eye on the right side.

Notice, how you can also see how the upper arrow appears even bigger? The glass is more wide at that height, magnifying properties of the water glass lens are therefore increased.

Isn’t that a super nice demo? I love it! Thank you for writing this guest post, Alice! :-)

P.S.: Alice has just been interviewed for a podcast. Curious what she’s talking about on there? Me too, but that’s why I follow her Instagram (@edu_al_ice) — to never miss out on all the cool stuff she’s up to! :-)