Bergen had it’s two days of allocated summer during the weekend of 22 – 23 July 2017 and Elsa and I decided to – in true Norwegian style – take advantage of the rare occasion and go for a hike. A colleague of mine has a “hytte” near Langhelle and had invited us over for the day. So we each packed our “matpakke”, hiking boots and got on the train from Bergen to Vaksdal, where my colleague had arranged to pick us up.

Anyway, long story short, apart from the spectacular view over Sørfjorden, I thought that the following would make you smile. Pointed it out to Elsa and, as if on cue, in unison we said your name out loud. 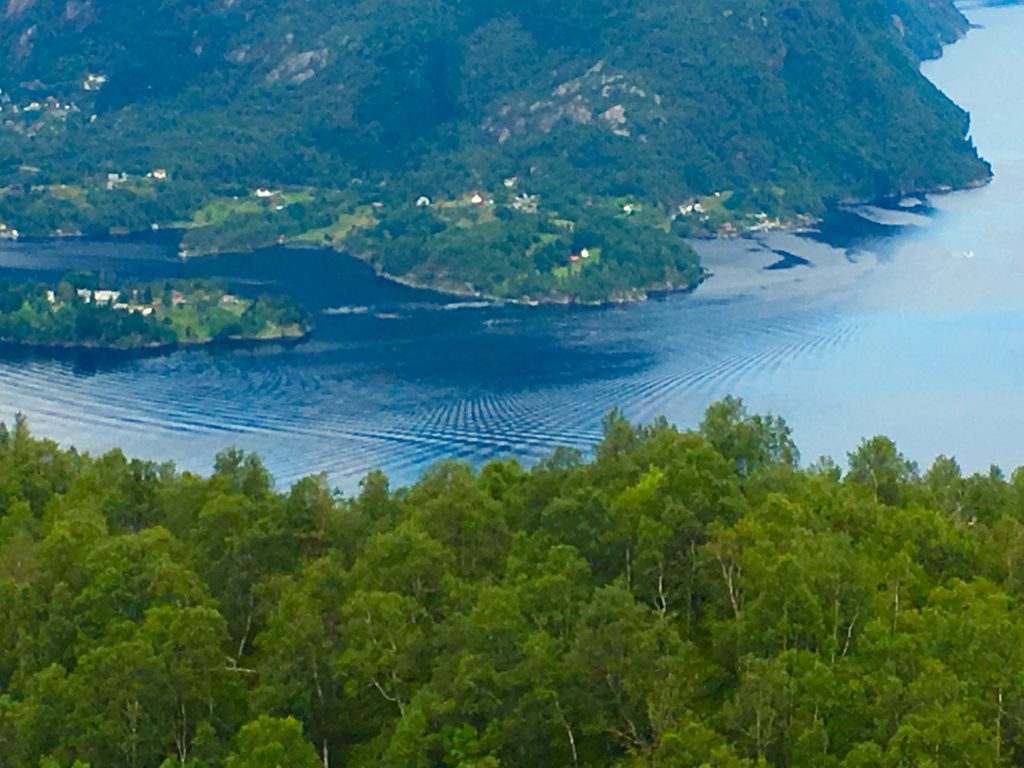 I’m afraid the resolution is not that great though – had to zoom quite a bit to capture what was much more clearly visible with the naked eye.

I’m including a map to show where it is. The arrow indicates more or less where we were standing when I took the picture; the circle around the area. Opposite Vaksdal, on the western bank (does a fjord have a “bank”? What’s the correct term? “Wall”?) of Sørfjorden is Olsneset and the little isle, Olsnesøyna, you see in the pic. There’s apparently an “open air” prison on the island. Not a bad place to be incarcerated! 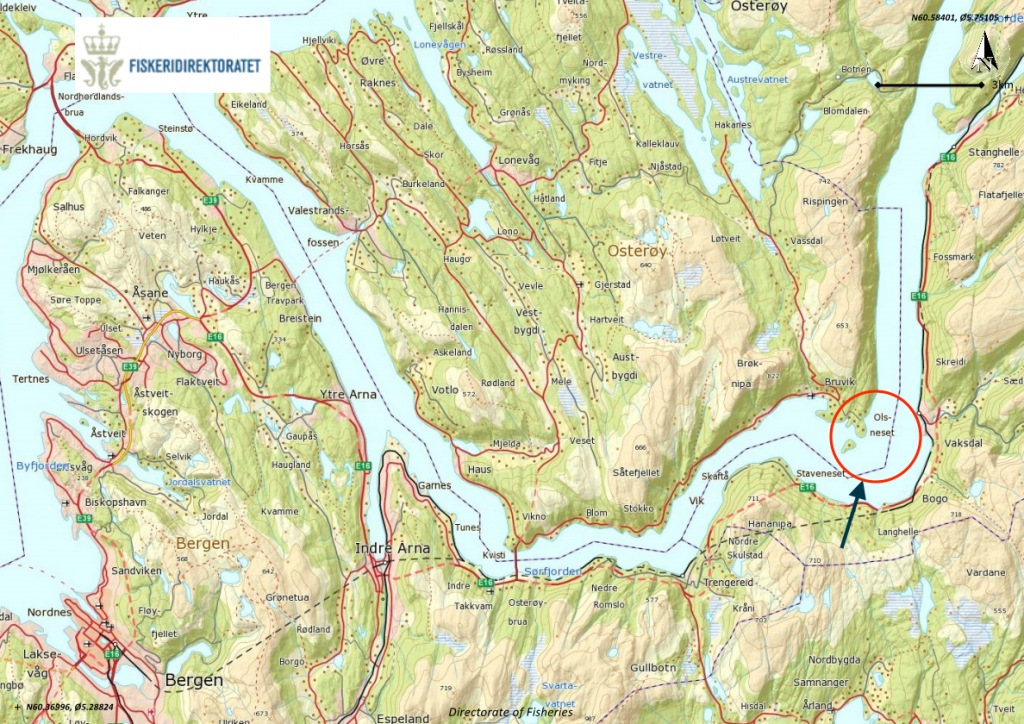 One of the wave trains was made by the little ferry that runs to and fro between Vaksdal, Olsnesøyna and Osterøy.

I’m sure that the readers of your blog would also enjoy the pic, so please feel free to use it.”

I obviously love it when my friends think of me, but it makes me even more excited when they think of me in connection to cool stuff related to water and send me pictures. But clearly the first thing I had to do upon receiving this email was to try and interpret the picture.

So I know there were two ships causing the waves. But which way were they going? So my first guess was two ships going in opposite directions. I’ve drawn the edges of their wakes into the picture below (ship 1 green, ship 2 red), the ships would now be more or less at the pointy end of each of the Vs. 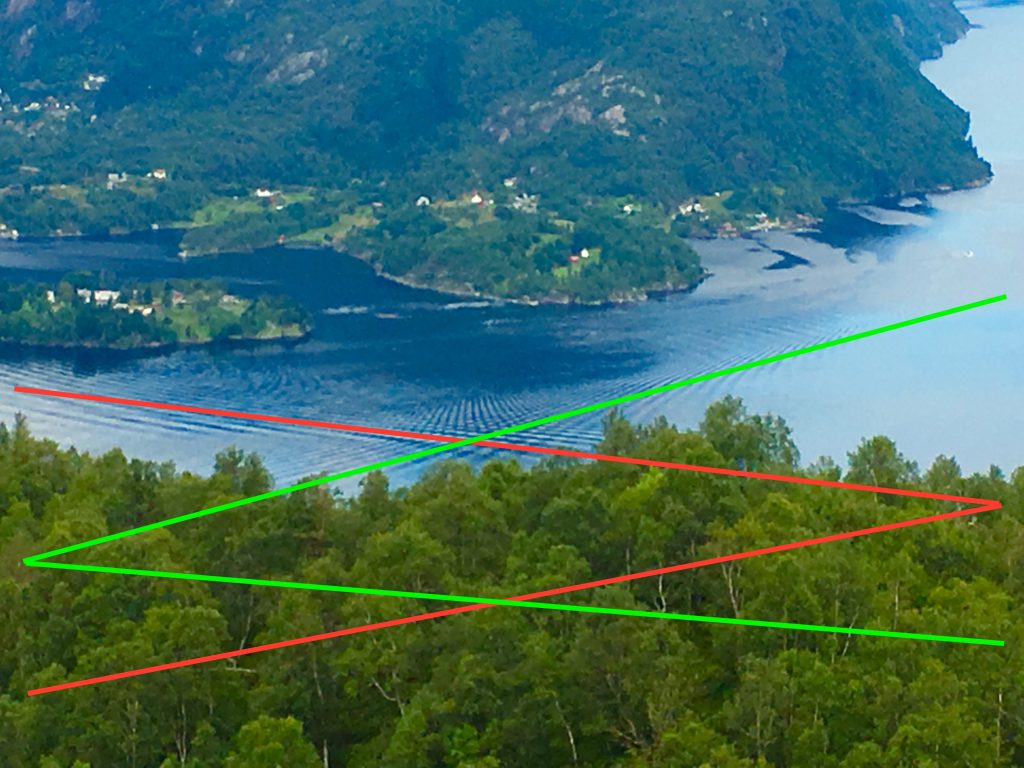 But then I noticed the waves that I drew in blue in the picture below. Could they be part of the wake if a ship? And could that white spot in the picture actually be said ship? Then ship 1 would actually be going in the opposite direction of what I first thought. So one side of the wake would be what I have indicated in red below, and that side I can actually see in the picture (and I am fairly confident now that that’s the correct interpretation, judging from the shape of the feathery winglets). The green second part of the wake is just my guess of where it would have to be if my idea of where the ship is is correct.

Ship 2 (now shown in yellow) is still going the way I thought it was. Phew ;-) 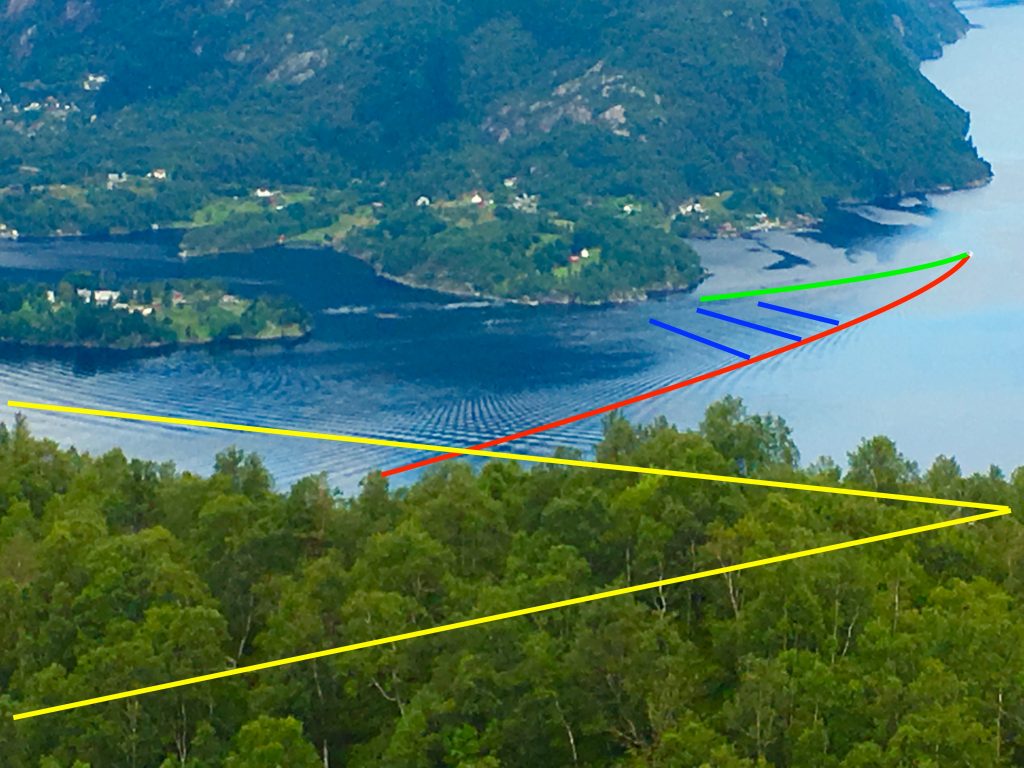 But there is one part of the picture that I think is especially cool: The actual interference part where parallel wave crests seem to appear out of nowhere (crests marked in red below, troughs in blue). This is a possible mechanism for the creation of those parallel wave crests marked in blue above, too, but I don’t think that that’s what had happened there. But I am confident that that is what happened for those waves marked below. 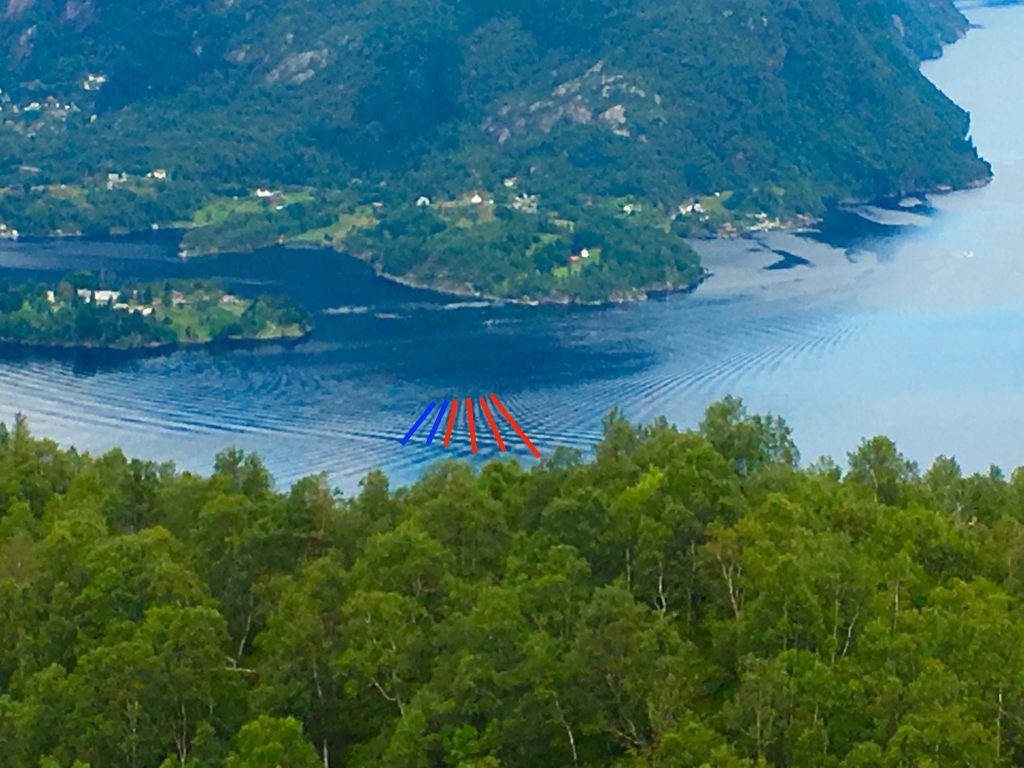 Now it’s your turn, Elsa and Pierre. Do you remember what was going on? How well am I doing interpreting waves? ;-)

This is SO MUCH HARDER than seeing stuff in pictures I took myself and remember the situation! You poor guys always seeing my pictures without good explanations of what is going on on them. I think I might have learned my lesson here…

Related Posts to "Awesome interference pattern in a Norwegian fjord":