Looking at the picture above, taken in the South Walney Island Nature Reserve on our walk yesterday, what is the first thing you notice?

For me, it is not the cute little hide which is a perfect spot for seal and bird watching, for me it is — obviously! — what is going on with the waves! So much so that I spent the better part of an hour looking at the opposite direction of where all the seals were frolicking in the waves (except for one that came and played in the most fun part of the sea — more about that later).

Looking at the picture below, do you notice how different the different areas of water surface look? To the left of the wave breaker and going offshore from there, the surface is quite rough, with many waves of different wavelengths. But then going directly offshore from the wave breaker, the surface is smooth(er)! Followed by a rougher stripe, before it becomes smooth again, and a couple of well-defined wave crests reach the shore. 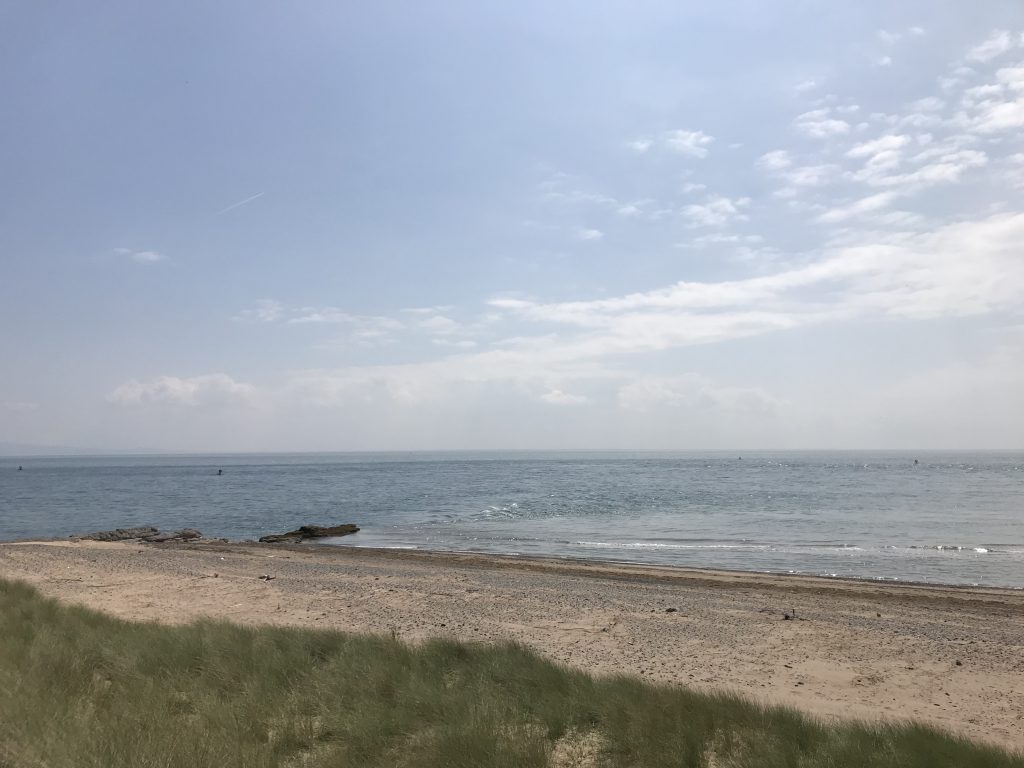 Zooming in on that area right off the wave breaker, you see that there are actually waves breaking towards the smoother area, away from the beach. Any idea what’s going on here, what might be causing those waves? (Hint: Even though there is a boat in the background, it is not some ship’s wake!) 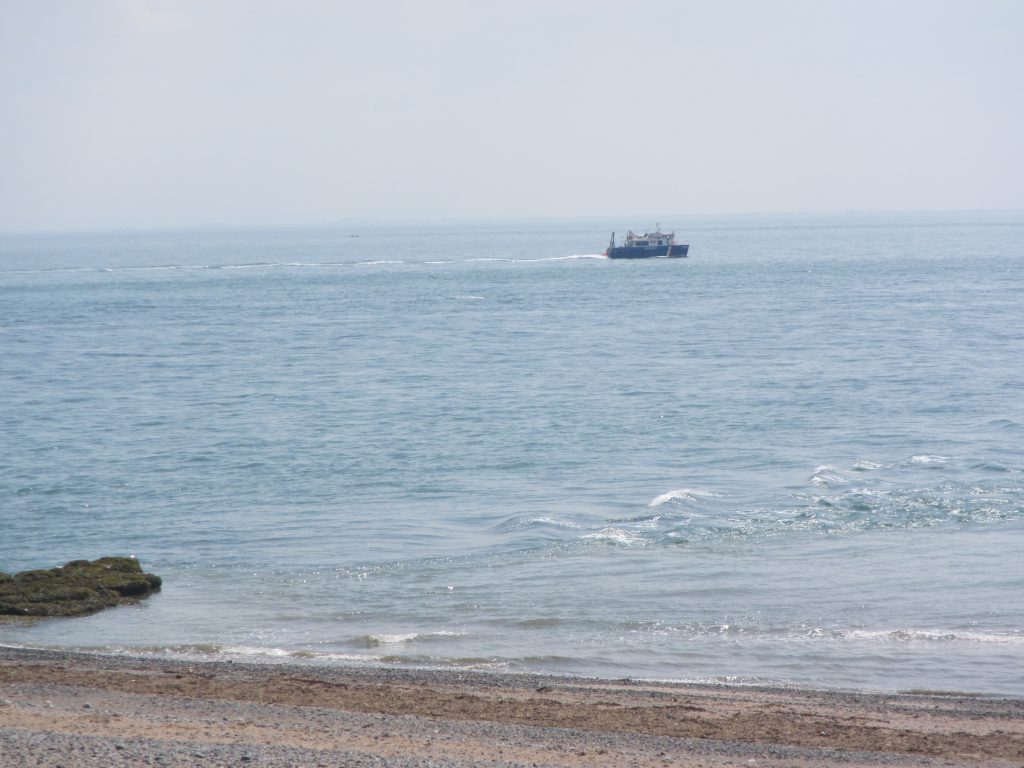 What we can observe here is actually a pretty cool phenomenon, called a hydraulic jump. Due to the tide going out, there is a current developing around the tip of Walney Island, going from left to right in the picture above. This current goes over the still-submerged part of the wave breaker. Since the cross section through which the water has to squeeze is all of a sudden a lot smaller than before and after, the water has to accelerate. And it accelerates so much that waves traveling on it are just flushed downstream and the surface looks smooth(er). Only when the cross section is wider and the water has slowed down, waves become visible again.

The spot where waves are exactly as fast as the current, but running against it, is called “hydraulic jump”. You can spot it right where the waves are breaking: They are trying to go back upstream but don’t manage to, so they stay locked in one place (see here for an analogy of people running up and down escalators to explain this phenomenon). You do see hydraulic jumps “in the wild” quite often, for example in rapids in rivers (and even more so in regulated rivers, very nice example here!). In case of the hydraulic jump right here, there was a seal playing in the current, clearly enjoying the wave action (and quite possibly also feeding on poor fish that suddenly get swept away with the current).

And indeed, 20 minutes later, the same spot looks like this: the surface roughness is a lot higher towards the right of the wave breaker, but all in all there are much fewer, and much smaller waves. 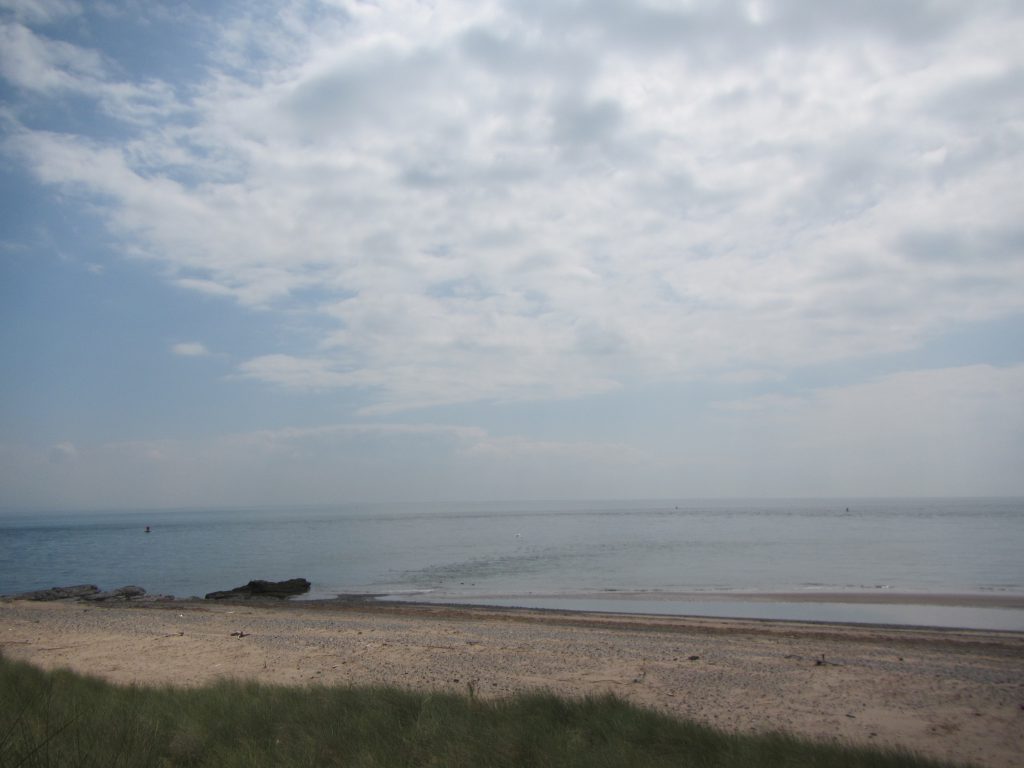 And another 20 minutes later, the formerly submerged wave breaker is revealed!

I find it always so cool when you see a wave field and just from what that wave field looks like, you can deduce what the ground underneath has to be like! In this case from seeing the hydraulic jump, you know that the wave breaker has to continue on offshore. 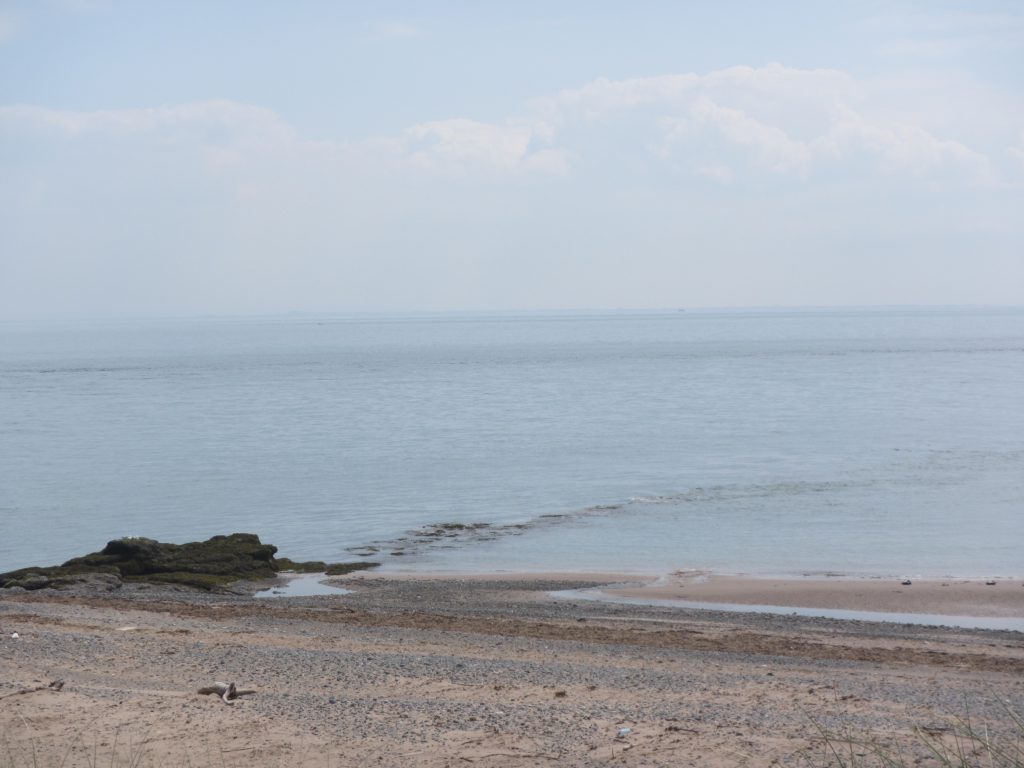 Wanna see the whole thing in action? Then here is a movie for you!

And the coolest thing is that this spectacle will repeat with every outgoing tide, so pretty much twice a day! And I am fairly confident that it will also happen halfway between, again, when the tide comes in and the current goes in the opposite direction. I would love to go back and check!

Wanna come on a walk with me and Astrid around the southern tip of Walney Island?

This is what our parking spot looked like when we arrived (we did park on this side of the gate, obviously). 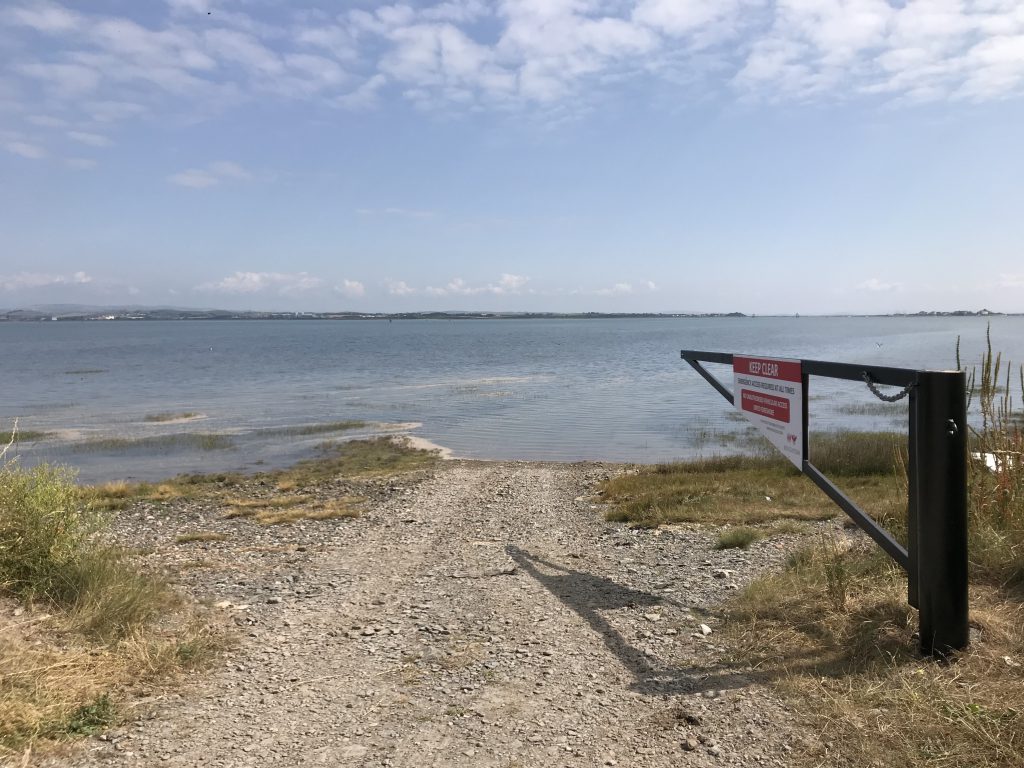 I find the salt marshes so impressive — all that grass that gets flooded every 12 hours! At low tide I keep taking pictures of crabs and little sea critters that got stranded in grass.

But very nicely visible how important the grass is for coastal protection: Waves get dampened out pretty quickly if they are running through grass! 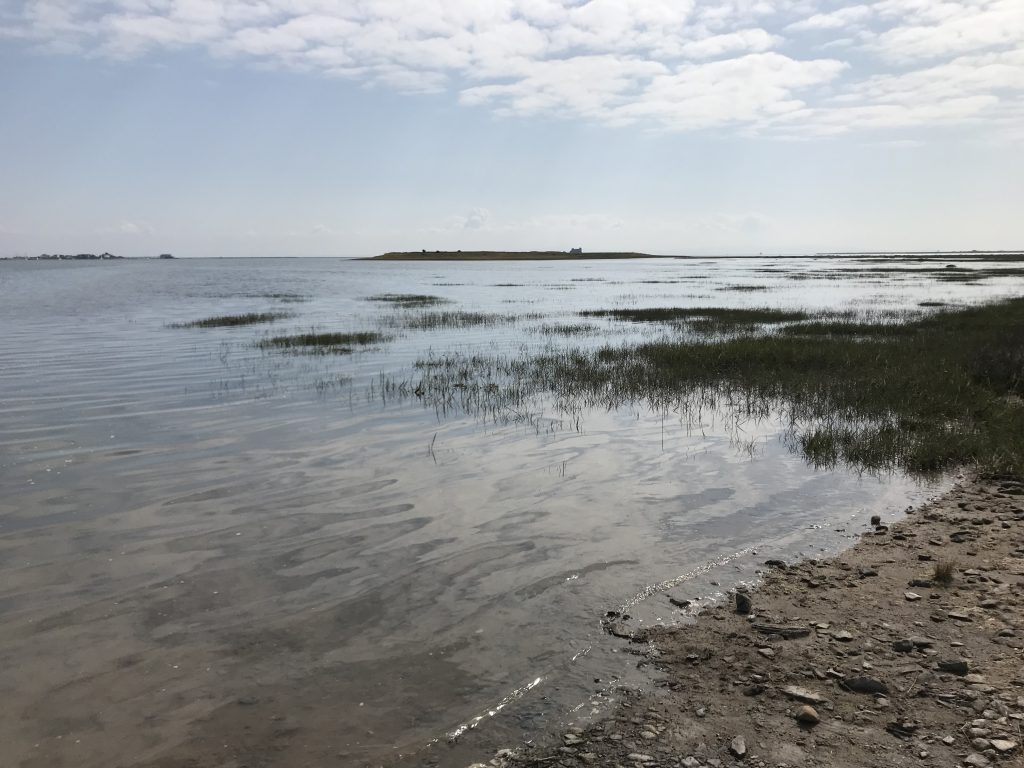 But let’s start walking. See the high tide lines on the beach? Great markers of some of the last high waters. This kind of stuff — parallel lines in the sand, mirroring the water line — looks very calming to me! 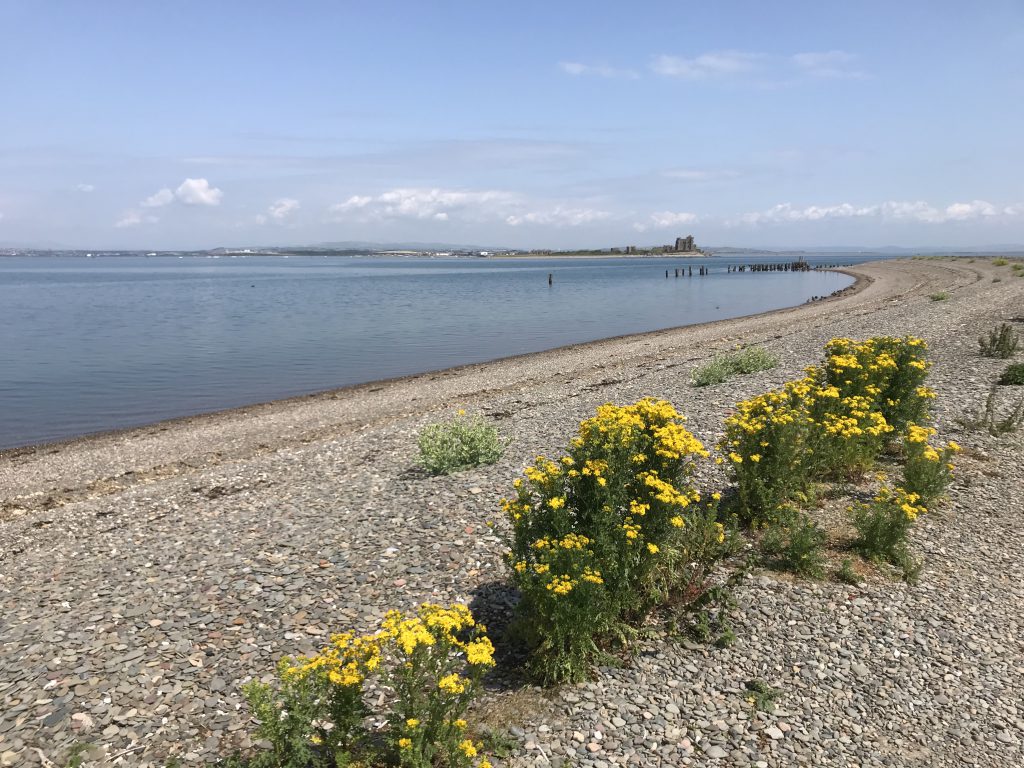 In the South Walney Nature Reserve, there are several hides where you can sit and bird (or seal) watch, or enjoy the shade or shelter. They are so lovingly done, and all include information about the wildlife to be observed. One even has an exhibition of the different sands found in different locations around the island! 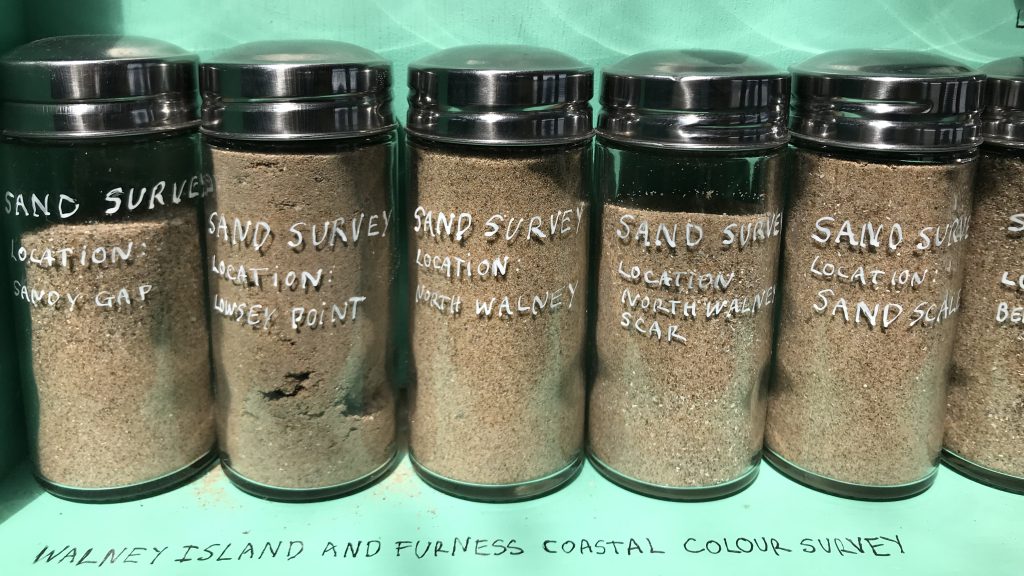 …and about other stuff found on the beach: beach shingle, rabbit poo and cow dung! I love this!

Moving on, we got closer to the lighthouse, which, unfortunately, isn’t open to the public any more. Just imagine the kinds of views you would get from up there! 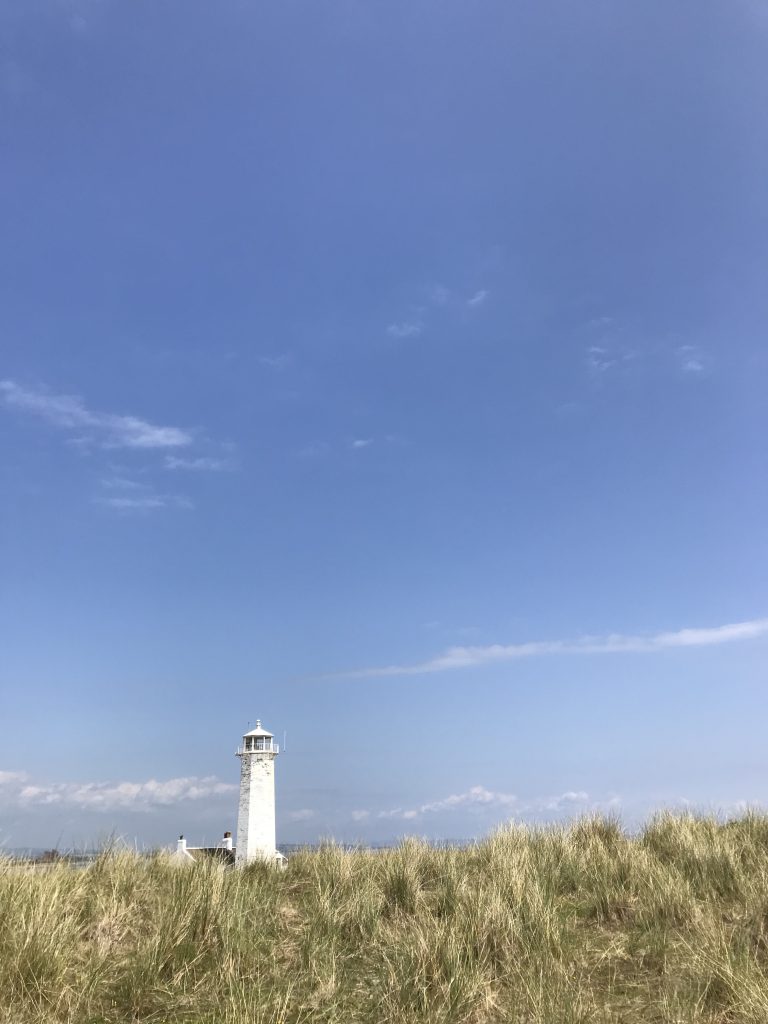 And then, as we were approaching another hide (the red cabin in the picture below), I spotted something else that held me captivated for the better part of an hour. And I don’t mean the seals frolicking in the sea! Can you spot it? 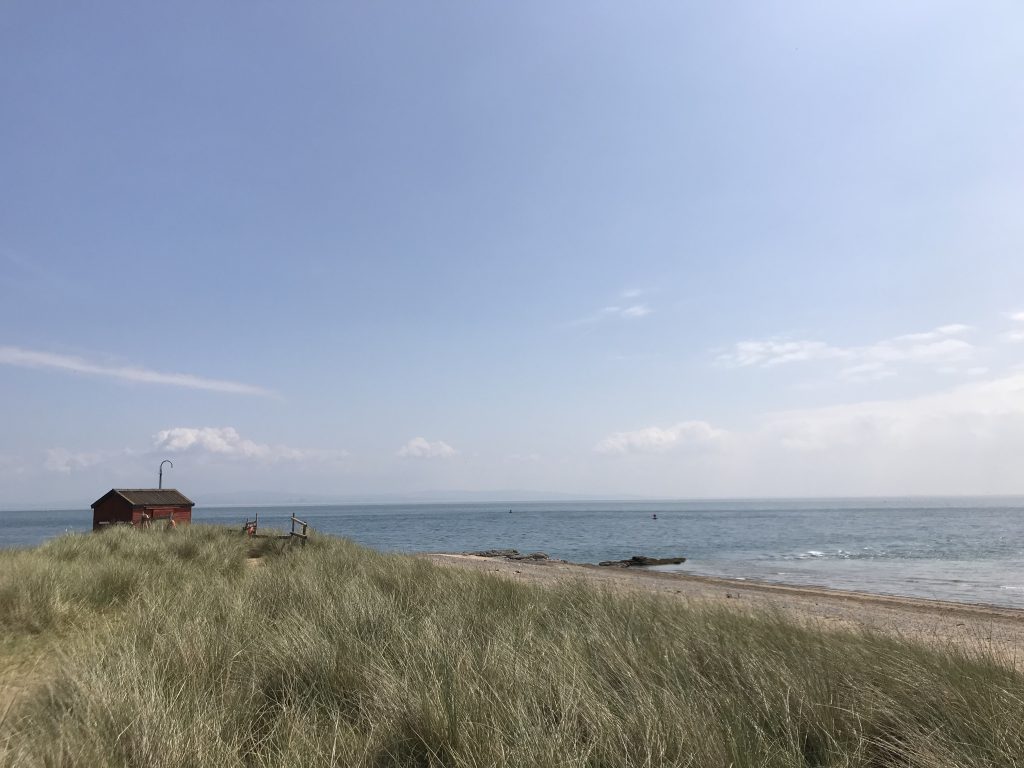 Here is a closer look. Do you see what is going on there?

I’ll publish a blogpost with the explanation later today (it just got too much to put into one post), so stay tuned if you want to look more closely at the water with me!

Walking back, here is a view of an old castle ruin across the bay. See the now exposed salt marshes and gullies? 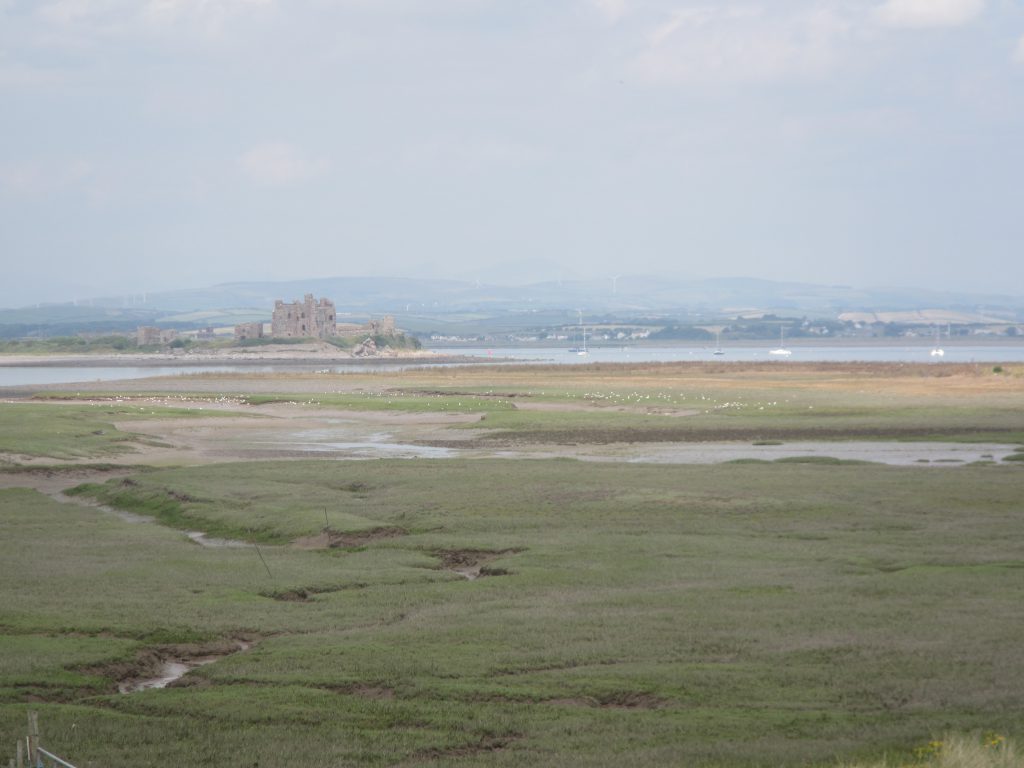 And here we are, back where we started. Go back to the picture up top of this same gate — isn’t it amazing that all this grassland was flooded only a couple of hours earlier, and will be flooded again in just a couple of hours? I am so used to seeing the german Wadden Sea coast where low tide exposes nothing more but mud… 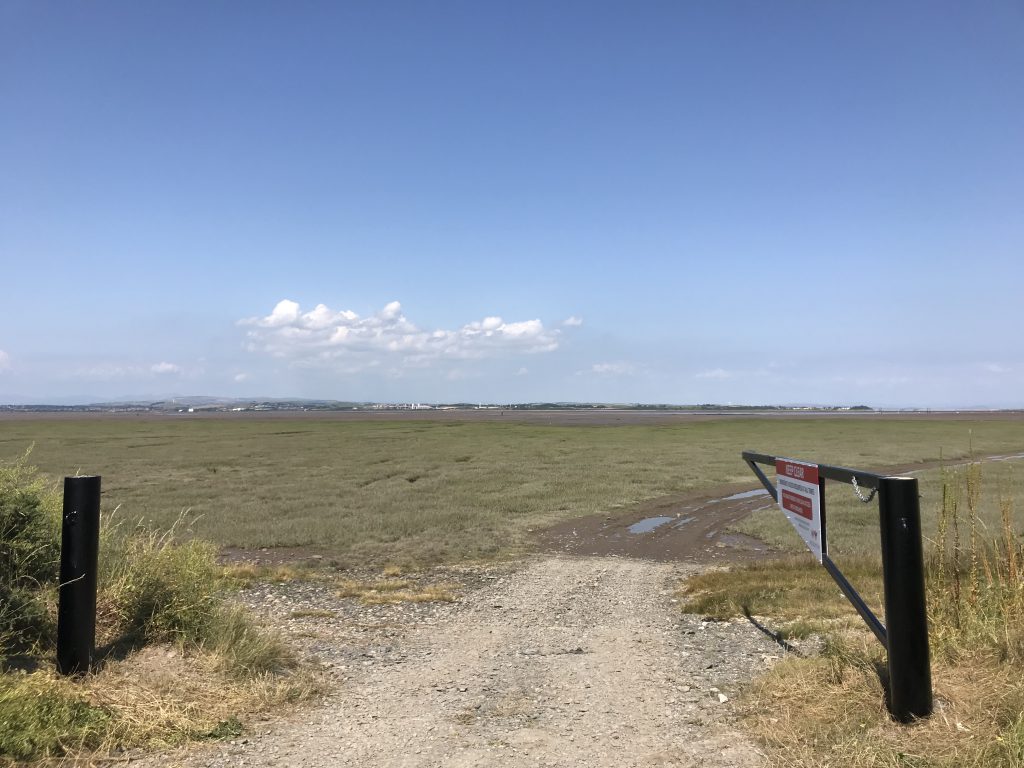