Today I have the pleasure to announce a guest post by Torge Martin. Torge, together with J&J, came to visit Hamburg recently, and we got stuck in some pretty bad weather. Which, being the oceanographers and meteorologists we are, meant that we got very excited, took about 100 pictures each, and me talking Torge into writing about what actually happened there. Which he did! So without further ado – enter Torge!

The 5-minute warning of a summer’s day sudden end.

A week ago we spent a wonderful day with Mirjam in Hamburg touring the harbor and downtown – very touristy. It was sunny and pretty hot for the average northern German. In the early afternoon the thermometer hit 28˚C. Perfect conditions for eating a big cup of ice cream at the Binnenalster, jumping on a Barkasse (little boats that ship tourists around the harbor) to catch at least a slight breeze, and for … a gorgeous thunderstorm.

When we climbed the 429 steps of the Michel (St. Michael’s tower) later in the afternoon we didn’t know that this was perfect timing to witness an impressive natural spectacle: The sky darkened quickly in the West and Southwest and within minutes a dramatic cloud formation took over the scene. 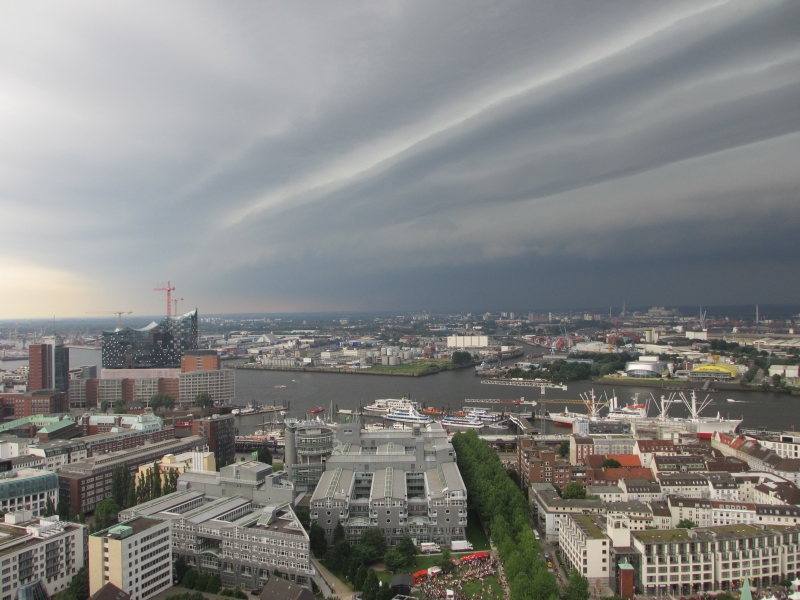 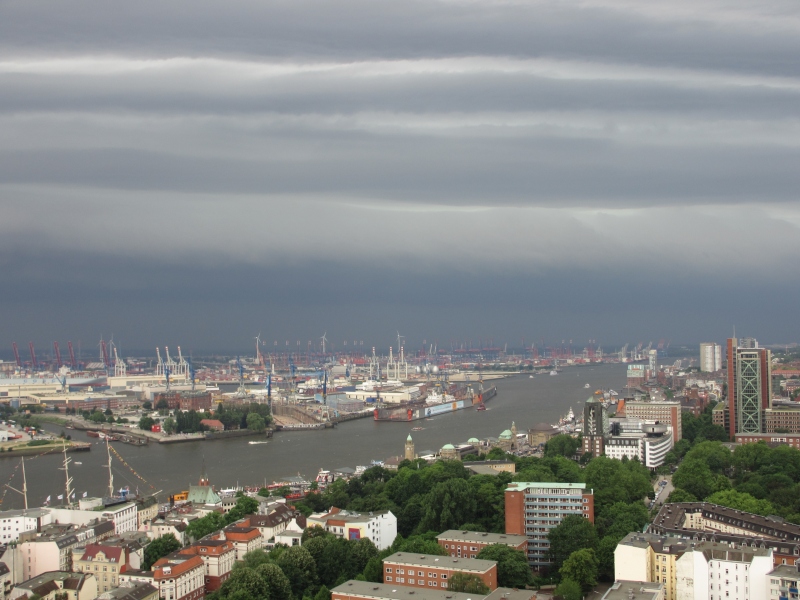 The horizontal “roll” across the picture (below the bright stripes) is a so-called shelf cloud that marks the leading edge of the approaching thunderstorm. In German such a cloud is often called Böenkragen (“gust collar”) or Böenwalze (“gust roll”), which hints at its shape and the strong winds that it is accompanied by.

How does such a shelf cloud form? I won’t go into all details of thunderstorm formation. The high cumulonimbus clouds of typical summertime thunderstorms are formed by strong, thermally driven updraft. Updrafts can reach vertical velocities of 50 km/h. When the moist air is cooled at higher levels, say at 6-9 km, condensation starts, and water droplets or ice crystals form. The droplets begin to fall within the cumulus cloud simply due to their weight and pull the ambient air with them along their way. This forms a downdraft, which is typically found in the rear part of the cloud while updraft still dominates the front side of the cloud. The downdraft flow spreads out horizontally near the ground and often comes with strong gusts at surface level. Since downdraft air is much cooler than the surrounding warm summer air, its spreading is associated with a cold front. The latter rapidly pushes upward the warm, moist surrounding air. As the warm air is lifted condensation may occur, which we then observe as a shelf cloud marking the leading edge of the gust front. On the ground we typically feel the downdraft from a thunderstorm as a drop in temperature and strong winds—in our case the 10-minute averaged wind speed peaked at 44 km/h and temperature dropped by 5˚C—while a change in wind direction and increase in air pressure can also be observed.

The shelf cloud, however, is not only beautiful and fascinating to observe, it also is nature’s “5-minute” warning to stop playing and go home (or find another safe place) before strong gusts and downpour hit.

In our case rainfall was heavy enough to reduce visibility from about 15 km to a mere 2 km. The rain was pushed horizontally through the tower top hurting on the skin. The crowd remaining at the top huddled together on the lee side of the hut, which shields the staircase from the elements. The gusts picked up dust from a nearby construction site in the harbor 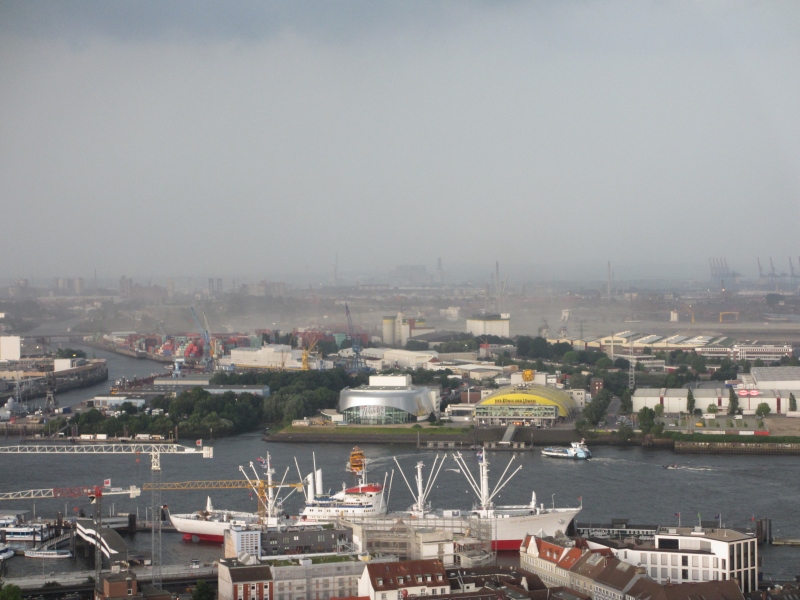 which probably helped the dramatic coloring of the lee side scenery. But that’s a different story … 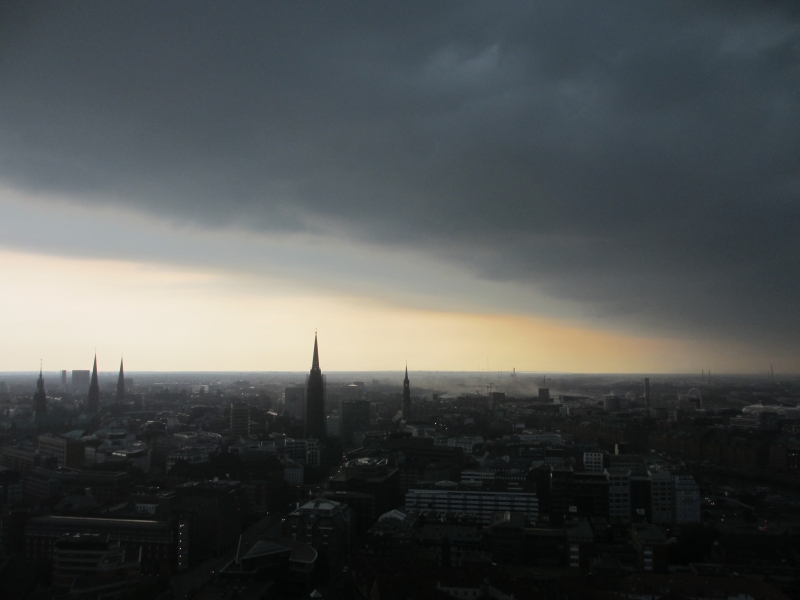 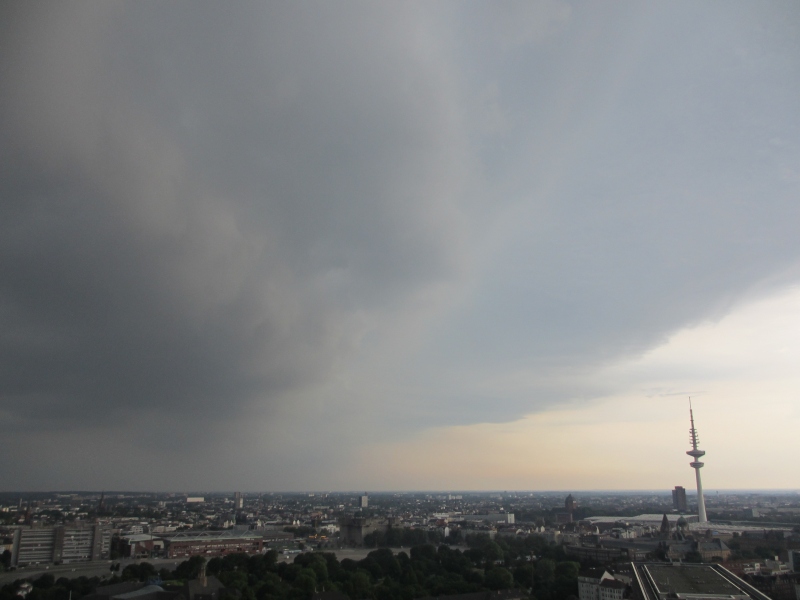 …but then life happened and I had to concentrate on other things. We were sailing with kids and it was quite windy… 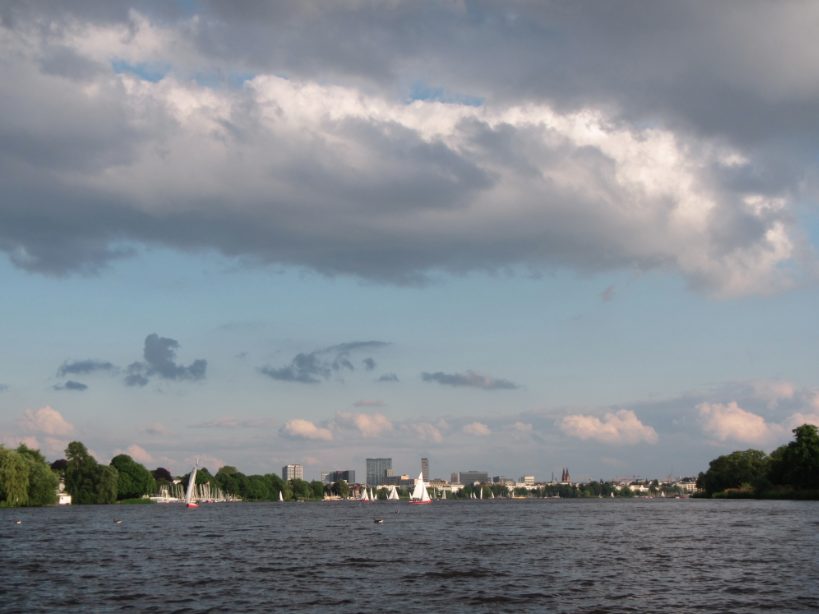 Luckily they are all pretty skilled sailors already, and were sensible enough to accept the restrictions on sail area that we imposed without too much grumbling. 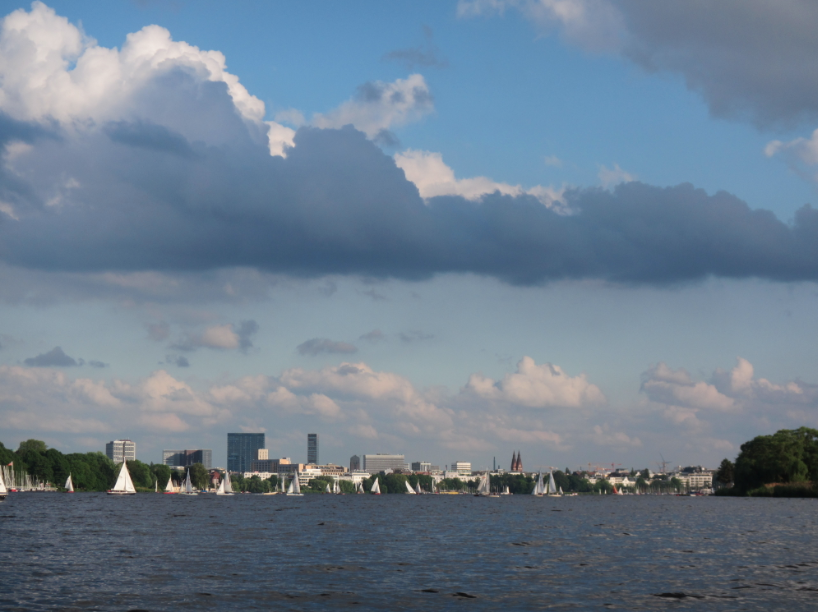 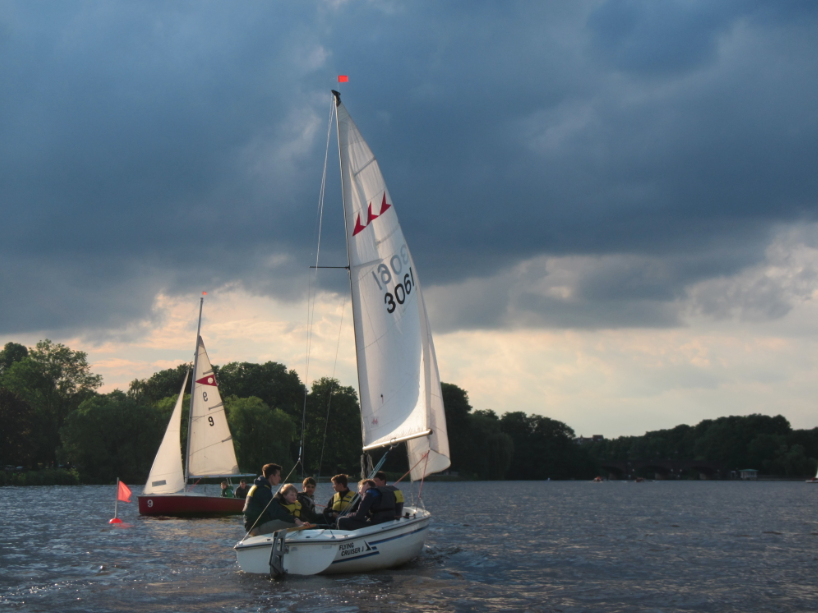 In the end all we had to do that day was watch the kids sail into the sunset.